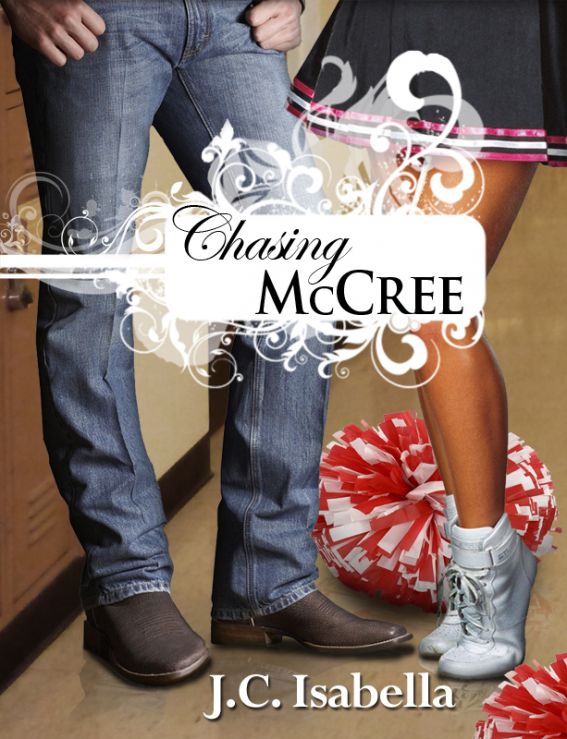 This book is the personal property of
J.C. Isabella. Its characters are fictional and any resemblance to
persons living or dead is strictly coincidental. This book is for
your entertainment, not to be given freely or resold in any
way.

Thank you for respecting her
work.

A siren blared. Someone cursed as they
sat impatiently at a red light. Another man laid on his horn. The
person in front of him wasn’t moving fast enough.

I wish I was in Montana. Nothing but
big skies and cool clean air filtering down from the white-capped
mountains. But I was in Florida near a fancy hotel and golf club. I
can’t imagine how anyone who lives here finds it enjoyable. Heat
trapped between the buildings and radiated off the pavement. The
green trees and grass were relegated to yards and medians.
Everywhere I looked tourists crowded the beaches, the
stores.

I did have a little piece of Montana
embodied in an old horse named Ash. Although I knew I could get
into some serious shit, I decided to take him out for a nighttime
ride through one of the parks in my neighborhood. The land behind
my house wasn’t big enough for him to gallop without going in
circles, and if it made me dizzy, then it had to be driving him
nuts.

“
Hup,” I urged him to jump
over a low shrub and headed for the soccer field, gathering speed.
It was set far back from the road, not well lit. The chances of
anyone seeing us were slim.

Ash was in heaven. He pumped his legs,
whinnying and shaking his head. It was invigorating and freeing.
The best idea and the most fun either of us had had in a couple
weeks.

We reached the far side of the field
near a swing set and I brought Ash down to a nice trot, making sure
he didn’t wear himself out.

“
What do you say we take a
break?” I pulled back on his reins next to a fountain wrapped in
cement steps and slid out of the saddle. It was a nice night,
hotter than I anticipated, but I couldn’t see the stars because of
all the city lights. I patted Ash, leading him around the fountain,
knowing we’d have to get back to the house before my mom. She was
in Tampa with her husband Todd, seeing some show or
other.

I grasped the saddle to mount Ash
thinking I’d take him for a final run before heading back. Movement
out of the corner of my eye brought me to a halt.

Now, I’m no idiot, and just because I
wasn’t used to city living, didn’t mean I’d go out at night in a
park without some protection. So I grabbed my grandfather’s whip
off the saddle, uncoiling it straight out. If the person behind me
was looking for an easy target, he was going to get a nasty
surprise.

Curling my fingers around the handle, I
glanced over my shoulder.

I was expecting to find a man looking
to mug me, anything remotely threatening, not a little blonde
cheerleader covered in glitter…and blood.

I looped the whip back on the saddle
not wanting to scare her, and turned to find her sitting carefully
on the steps of the fountain.

She hiccupped. “That’s a
horse.”

“
Yep,” I said, glancing
around, wondering why she was alone.

“
You can’t have a horse in
a park.” Her voice went up an octave and back down on a
slur.

“
Are you drunk?” I couldn’t
hide my shock. It didn’t surprise me that someone could get wasted
and wander around a park. But a girl, dressed in a skimpy
cheerleading uniform, who looked like she’d be blown over by a good
gust of wind? This was the last place she needed to be. What was
wrong with these city people? Were they all insane? Or maybe it was
me. The slow talking, country poke, as my classmates have so nicely
called me. Being from two different worlds, the chances we’d see
eye-to-eye right away were slim.

“
I am
perferlectly…perfictfly…” her bottom lip pouted out and she gave
up. “I’m fine,” she put her head between her knees. “Can you make
those extra two feet go away?”

“
I’m sorry.” What else was
I supposed to say? There was something familiar about her though.
Her cheerleading uniform sported the colors of my new high
school.

I studied her a little more
closely.

Yep, she was definitely one of the
popular crowd. I’d seen her around a few times, never talked to
her. I was on the bottom of the totem pole, and she might as well
be royalty.

She started to giggle.

Shit. What the hell was I supposed to
do now?

“
Make it stop,” she sobbed,
sitting up and wiping the tears away with her hand. Her nails were
hot pink.

“
I don’t feel good. I’m
laughing, next I’m crying. My face feels like a balloon. My knees
hurt and my hands hurt…and did I tell you my head hurts,
too?”

“
Yeah, you did. Alcohol
obviously doesn’t sit well with you.” She was a mess, and oddly
cute. I crouched to get a closer look at the little train wreck.
Her makeup smeared, tracks of black running down her cheeks, mixing
with silver glitter. I looked lower. Her hands laid palm up in her
lap. They were red and raw, with little pecks of gravel embedded.
Both of her knees were bloody, lines of red dried to her shins with
even more gravel and dirt. My chest felt tight. She might be one of
those popular brats, but she didn’t deserve this. “How’d that
happen?”

“
I fell.” She said,
blubbering and sniffling. “A man chased me, and I ran. But I
tripped because I…sometimes I have four feet! A person can’t just
sprout two extra feet, right? It really hurts to walk. I don’t know
what hurts the most. And I don’t know what I’m doing, because I’m
drunk! I don’t want to be drunk… Did I tell you my head
hurts?”

“
Yeah, for the third time.
I’ve never heard of someone growing extra feet.” I stood up,
decided she was going to be a pain until she sobered, but I wasn’t
going to let anything else happen to her. “Did you hit your
head?”

It took her a minute. She stared hard
at my boots before looking back up to answer. “No.”

“
Once, last year at cheer
practice.” She yawned. “I fell off the pyramid.”

She stared blankly, as if I was crazy.
“Why would I do that? My head already hurts.”

Great, now that was cleared up, I got
back on track. “Let me take you home.”

“
No!” she leapt up and
swayed forward. I steadied her. As soon as she had her footing she
shoved me away. “Leave me alone. I’m not that kind of
girl.”

“
Fine.” I said, watching
her march toward the soccer field, heading in the general direction
of nowhere. If she walked far enough she’d end up in the creek.
Being wet was bound to upset her even more, until she drowned.
Swimming…hell, wading, would be the final straw. She’d sink like a
stone. And if I let that happen, I’d go down as the only bastard in
history to let a drunken cheerleader drown in three feet of water
at a family park. I felt bad for her. Really, I did. I also hoped
that she’d learned her lesson.

“
Goodbye.” She shouted,
walking the saddest excuse of a straight line I’d ever seen. Might
as well have been walking backwards. That would have been
faster.

“
Why me?” I couldn’t just
let her wander off. No telling who was out in the park. One man had
supposedly chased her, caused her to skin both knees and palms. So
I mounted Ash and followed, keeping my distance.

She whipped around and pointed her
finger at me. “Are you following me?”

“
Nope.” I lied, trying not
to laugh. She was an adorable mess. Chunks of her honey blonde hair
were starting to fall out of the sparkly clips on her head, curling
about her face.

Her eyes widened. “Why?”

“
Because your hurt and
drunk. Do I need a better reason than that?”

“
Yes, you do.” She stuck
her nose in the air, haughtily, and I knew I’d met my match. She
was stubborn as a mule, a pain in the ass, and drunker than my
Uncle Jerry on New Year’s.

I rubbed the back of my neck, “I only
want to make sure you’ll be safe. I’m not chasing you around all
night because I think it’s a nice way to pass time.”

“
Oh,” her bottom lip
quivered and the tears came back in full force. Lucky for her I had
enough patience to cope.

“
What now?” Did I say
something upsetting?

“
I don’t feel good.” She
doubled over and proceeded to empty the contents of her stomach on
the soccer field.

I rolled my eyes heavenward, dropped
off Ash and left him to wander. When I was within an arm’s length
she backed up, turned, and staggered away.

“
I’m not going to hurt
you.” I said in a soothing tone, one that I used to calm a frenzied
horse. It was the same thing. She was skittish, her mind and body
locked in flight mode.

She was still crying too. It was an
amazing sight to behold. “I’m embarrassed.”

“
Because you got
sick?”

“
Duh!” she scampered away,
legs wobbling. “I’ve never done that in front of a guy
before.”

“
Sure, cowboy.” She
stumbled over her own feet.

“
Whoa,” I grabbed her
around the waist before she went down on her knees and irritated
the scrapes.

“
Let me go!” She struggled
and I prayed a passerby didn’t see us and get the wrong
idea.

“
Sorry, you’re stuck with
me. Now calm down. Hey, don’t bite me! I’m not going to hurt you.”
I pinned her arms, held her close until she slumped in defeat.
Hell, at least she didn’t kick like a mule. She hiccupped, sighed,
then pressed her face into my shoulder, soaking my shirt with
tears, smearing me with silver glitter and lord knows what
else.

“
Why won’t you let me take
you home?” I asked, keeping my voice low, rubbing her arms. Sooth
the savage beast, as my grandfather used to say. Not that she was
savage or beastly. “I won’t make you ride the horse, I’ll get my
truck.”

“
It’s not the horse.” She
went limp. “I don’t want my parents to see me like this. They’d be
so disappointed.”

“
Okay, somewhere else then.
Where can I take you?”

That left me two choices, one of which
I’d already decided against. I couldn’t leave her in the park…but I
could take her home with me. I glanced at Ash waiting patiently and
hoped he was up to having a second, somewhat hysterical,
rider.

I called him over and grabbed the
reins, patted his side. With a little coaxing, because he hadn’t
done tricks in a while, I got him to kneel. I threw my leg over and
brought the girl down in front of me. She let out a squeal, started
laughing as soon as Ash was standing. Then she cried. Changing
emotions so quick I couldn’t keep up.

“
So what’s your name?” I
asked, keeping one arm tight around her waist so she didn’t slide
out of the saddle or try to jump down. Didn’t need to add any more
injuries to her.

“
Briar Thompson.” She said,
running her fingers through Ash’s mane. Calmer. She had a horse as
a distraction. “Who are you?”

“
Last time I checked.” That
got a chuckle out of me, and she laughed too. I couldn’t help but
think she looked like a princess, despite her messy
appearance.