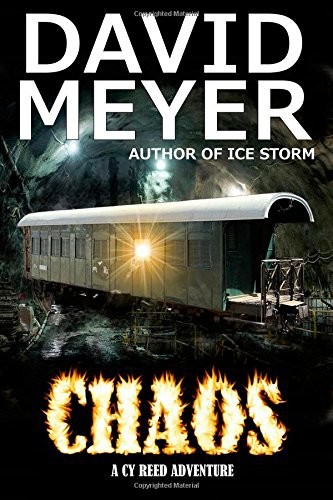 This book is a work of fiction. Names, places, characters, and incidents either are the product of the author’s imagination or are used fictitiously, and any resemblance to actual persons, living or dead, business establishments, events, or locales, is entirely coincidental.

No part of this book may be reproduced or transmitted in any form or by any means, electronic or mechanical, including photocopying, scanning, uploading, recording, or by information storage and retrieval system, or the Internet without prior written permission of the Publisher, copyright owner except where permitted by law. Your support of the author’s rights is greatly appreciated.

Manufactured/Printed in the United States of America

This book is for Julie, my wife and the love of my life.
Without your support, none of this would’ve been possible.
Thank you for everything.

Fred Jenson’s heart skipped a beat as he examined the gigantic black shadow that rose menacingly out of the darkness. What was a subway car still doing in the tunnel? Had it been damaged by the fire?

Sweat poured from his forehead, soaking his grimy face. With shaking hands, he lifted the bottle of Evan Williams, unscrewed the top, and tipped a few ounces down his throat.

It didn’t burn. It never burned. Not anymore.

He stared at the car through bleary eyes. Must be fire-damaged. That was the only explanation that made sense. Yet, at least from his vantage point, it looked perfectly normal.

Jenson inched forward. He didn’t want trouble. He merely wanted to see the destruction. The old guy, the one in the checked blue coat who slept in the maintenance shack, had told him all about it.

Earlier that evening, a mysterious fire had ravaged the Times Square station, destroying a five-car length strip of the terminal. The 42
nd
Street Shuttle ceased operations immediately. Shortly after, the Metropolitan Transportation Authority shut down the entire route. Maintenance workers converged on the station, eager to complete repairs before the morning rush.

Three R36 ML subway cars were crippled by the blaze and all had supposedly been evacuated from the area. Scores of people suffered burns, with at least four confirmed fatalities. While the cause remained unknown, the old guy swore he overheard police officers chatting about it.

And they thought it was arson.

Abruptly, Jenson stumbled to his knees. His teeth clenched as a thousand knives pierced his skull. His vision crumpled from the corners and blackness enveloped him.

A roar of pain screeched out of his belly. Slamming his mouth shut, he cut it off, just like he’d done thousands of times before.

No one’s going to hurt you down here. The war is over.

Jenson began to count to sixty, slowly and methodically.

Gradually, lines and shapes began to poke out of the darkness. He saw the concrete trough. The dull running rails. The rotten wood ties. His pulse slowed. His nerves relaxed. Finally, the knives exited his skull and he exhaled with relief.

It was over. Sixty seconds had passed since he’d first felt the pain. Just sixty seconds. And yet, it felt much closer to sixty days instead.

His fist still held the half-full bottle of Evan Williams. Rising unsteadily to his feet, he raised it back to his lips and poured more bourbon into his stomach. His heavy breathing eased.

He took another swig.

He stared at the bottle, wavering slightly in his hand. Cheapest medical treatment he’d ever known. And far safer than those damn Veterans Affairs hospitals. He had that thing that was all the rage these days…what did the papers call it? Post-traumatic stress disorder?

Jenson bent over, fished through the dirt, and retrieved the cap to the bottle. Slowly, he screwed it back into place, protecting the precious liquid.

Sixty seconds. That’s all it took. Sixty seconds to normalcy. Sixty seconds for his body to forget that other sixty seconds in Iwo Jima, the ones that had destroyed his life. That day, a bomb exploded in his soul, shattering it into a billion pieces.

Within sixty seconds of hitting that hellhole, enemy fire cut down his four closest friends. The five of them had jumped off the boat together and stormed the beach. But it was no ordinary beach. It was volcanic ash. As they ran forward, they quickly found themselves buried waist deep in it.

And then the shooting began.

Jenson didn’t know how he survived the battle. The last thing he remembered was seeing his friends bent over at the waist, their arms splayed to the side, their faces lying in ash, their bodies riddled with holes.

After the war ended, he returned to his family. He went back to work at Brooklyn Gas & Electric. And for weeks on end, he sat in his chair, hunched over his desk, checking transactions for eight hours a day. He tried to live a normal life. And it worked.

For a little while.

Admittedly, he hadn’t tried that hard. What was the point? He wasn’t the same person, not anymore. So, how could he be expected to return to the same life?

Jenson took a deep breath and walked forward, determined to conquer his fears. Fuzzy lines gradually firmed up and he began to see the subway car and its surroundings clearly. His aged, cauliflower ears caught something. He cocked his head and listened for a second. An uncomfortable feeling crept over him and he felt his blood pressure rise.

The noises arose from the general direction of the subway car. Noises he recognized. Noises that told him one indisputable, yet disturbing fact.

Jenson felt a pinprick in his skull. He clamped down on his emotions, struggling to get them under control.

Eventually, his breathing slowed. He forced himself to look at the car and put it into context. It was one of the ruined R36 MLs. It had to be. And the noises probably came from subway workers. They were preparing to tow the car back to one of the yards for repairs. Yes, that explained everything.

He could see shadowy figures now, moving back and forth from a gaping hole in the south wall to the subway car. Two figures climbed out of the hole, carrying a massive bell-shaped object between them. It looked like it weighed a thousand pounds. And yet, the two figures held it aloft with little apparent effort.

Jenson’s brain told him to turn and run. But the strange object piqued his curiosity. Against his better judgment, he crouched down and moved toward the center of the tracks, hoping for a better look.

The two men carried the object to the side of the subway car. They stood tall, unbending, as if the object in their hands weighed nothing at all. They disappeared into the car and then reappeared a few seconds later.

They walked away but Jenson barely noticed them. Instead, his eyes remained fixed on the car, trying to catch another glimpse of the strange, bell-like object.

But before he could do so, the men returned. This time, they carried a long, cylindrical burlap bag between them. Jenson stared at it.

His heart skipped another beat.

The bag was moving.

He’d seen enough to understand the danger he faced. If the shadows saw him, they’d kill him. Spinning around, Jenson ran.

Twin lights surged from behind him, casting a bright glow across the tunnel. Cursing, he slipped to the side of the track, opposite the third rail, and put on a burst of speed.

The single, non-pedestrian track under his feet connected the 42nd Street Shuttle Line to the Lexington Avenue Line. Ordinarily, it allowed shuttles to be taken in and out of service. But now, it served another purpose. It was his way out. His freedom.

He felt the ground tremble slightly. Digging deep, he picked up the pace.

He stumbled. His hand reached out and touched the wall. Lurching forward, he tried to maintain his footing.

The light grew brighter and brighter. With one last long step, Jenson flew into another tunnel. Ducking to the side, he plastered himself against the wall. His heart slammed against his chest.

The subway car breached the pedestrian tunnel. It moved slowly and quietly, almost as if it were sneaking away from something.

As it passed by, Jenson couldn’t help but stare at it. In addition to its strange contents, the railcar itself was highly unusual. Unlike the dull, faded grey that covered most subway cars, it exhibited a rich coat of silver paint. Instead of graffiti scrawls, a single word, written in black foot-size lettering, adorned the low alloy high tensile steel siding.

The
Omega
paused and Jenson pressed his body as hard as he could against the concrete. Someone had seen him. He was sure of it.

But then, with a sullen, mechanical groan, the car completed its turn and pressed forward, heading south.

Jenson slid down, his back scraping against the wall. His haunches came to a rest just above his worn shoes.

Relief swept over him.

A loud high-pitched shriek reverberated across the tunnel, ping-ponging from wall to wall. Jenson glanced to his right. The
Omega
stood quietly in the semi-darkness.

Metal rasped against metal. Then, three shadows hopped out of the subway car’s side and ventured to the front.

“Running rails,” one of the figures announced. “How the hell…?”

Gunfire erupted from the south. One of the shadows jerked backward and fell. The other two retreated to the safety of the
Omega
.

Knives sliced back into Jenson’s skull, sending waves of debilitating pain down his spine. He crumpled to the ground.

New shadows, too many to count, swarmed the subway car. The ear-piercing barrage continued for another forty seconds. As the tunnel fell quiet, Jenson felt more screams barreling their way toward his throat. Desperately, he tried to stop them. Any noise would give away his position.