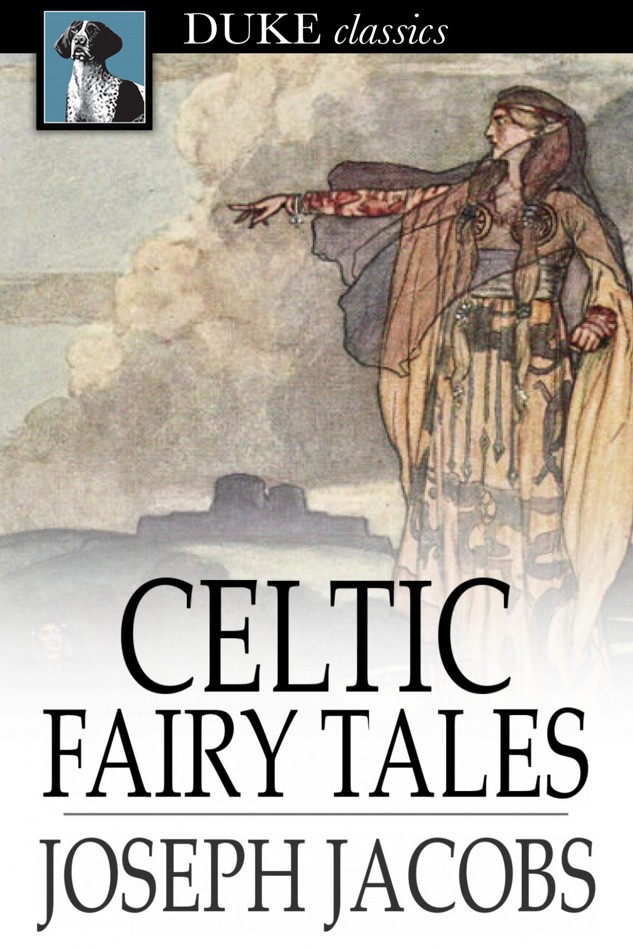 *
Celtic Fairy Tales
From an 1892 edition
ISBN 978-1-62011-534-3
Duke Classics
© 2012 Duke Classics and its licensors. All rights reserved.
While every effort has been used to ensure the accuracy and reliability of the information contained in this edition, Duke Classics does not assume liability or responsibility for any errors or omissions in this book. Duke Classics does not accept responsibility for loss suffered as a result of reliance upon the accuracy or currency of information contained in this book.
Contents
*
Preface
Connla and the Fairy Maiden
Guleesh
The Field of Boliauns
The Horned Women
Conall Yellowclaw
Hudden and Dudden and Donald O'Neary
The Shepherd of Myddvai
The Sprightly Tailor
The Story of Deirdre
Munachar and Manachar
Gold-Tree and Silver-Tree
King O'Toole and His Goose
The Wooing of Olwen
Jack and His Comrades
The Shee an Gannon and the Gruagach Gaire
The Story-Teller at Fault
The Sea-Maiden
A Legend of Knockmany
Fair, Brown, and Trembling
Jack and His Master
Beth Gellert
The Tale of Ivan
Andrew Coffey
The Battle of the Birds
Brewery of Eggshells
The Lad with the Goat-Skin
Notes and References
*

Three times, with your eyes shut

And you will see

What you will see

Last year, in giving the young ones a volume of English Fairy Tales,
my difficulty was one of collection. This time, in offering them
specimens of the rich folk-fancy of the Celts of these islands, my
trouble has rather been one of selection. Ireland began to collect
her folk-tales almost as early as any country in Europe, and Croker
has found a whole school of successors in Carleton, Griffin,
Kennedy, Curtin, and Douglas Hyde. Scotland had the great name of
Campbell, and has still efficient followers in MacDougall, MacInnes,
Carmichael, Macleod, and Campbell of Tiree. Gallant little Wales has
no name to rank alongside these; in this department the Cymru have
shown less vigour than the Gaedhel. Perhaps the Eisteddfod, by
offering prizes for the collection of Welsh folk-tales, may remove
this inferiority. Meanwhile Wales must be content to be somewhat
scantily represented among the Fairy Tales of the Celts, while the
extinct Cornish tongue has only contributed one tale.

In making my selection I have chiefly tried to make the stories
characteristic. It would have been easy, especially from Kennedy, to
have made up a volume entirely filled with "Grimm's Goblins"
à la
Celtique
. But one can have too much even of that very good
thing, and I have therefore avoided as far as possible the more
familiar "formulae" of folk-tale literature. To do this I had to
withdraw from the English-speaking Pale both in Scotland and
Ireland, and I laid down the rule to include only tales that have
been taken down from Celtic peasants ignorant of English.

Having laid down the rule, I immediately proceeded to break it. The
success of a fairy book, I am convinced, depends on the due
admixture of the comic and the romantic: Grimm and Asbjörnsen knew
this secret, and they alone. But the Celtic peasant who speaks
Gaelic takes the pleasure of telling tales somewhat sadly: so far as
he has been printed and translated, I found him, to my surprise,
conspicuously lacking in humour. For the comic relief of this volume
I have therefore had to turn mainly to the Irish peasant of the
Pale; and what richer source could I draw from?

For the more romantic tales I have depended on the Gaelic, and, as I
know about as much of Gaelic as an Irish Nationalist M. P., I have
had to depend on translators. But I have felt myself more at liberty
than the translators themselves, who have generally been over-
literal, in changing, excising, or modifying the original. I have
even gone further. In order that the tales should be characteristically
Celtic, I have paid more particular attention to tales that are to be
found on both sides of the North Channel.

In re-telling them I have had no scruple in interpolating now and
then a Scotch incident into an Irish variant of the same story, or
vice versa
. Where the translators appealed to English folklorists
and scholars, I am trying to attract English children. They translated; I
endeavoured to transfer. In short, I have tried to put myself into the
position of an
ollamh
or
sheenachie
familiar with both forms
of Gaelic, and anxious to put his stories in the best way to attract
English children. I trust I shall be forgiven by Celtic scholars for the
changes I have had to make to effect this end.

The stories collected in this volume are longer and more detailed
than the English ones I brought together last Christmas. The
romantic ones are certainly more romantic, and the comic ones
perhaps more comic, though there may be room for a difference of
opinion on this latter point. This superiority of the Celtic folk-
tales is due as much to the conditions under which they have been
collected, as to any innate superiority of the folk-imagination. The
folk-tale in England is in the last stages of exhaustion. The Celtic
folk-tales have been collected while the practice of story-telling
is still in full vigour, though there are every signs that its term
of life is already numbered. The more the reason why they should be
collected and put on record while there is yet time. On the whole,
the industry of the collectors of Celtic folk-lore is to be
commended, as may be seen from the survey of it I have prefixed to
the Notes and References at the end of the volume. Among these, I
would call attention to the study of the legend of Beth Gellert, the
origin of which, I believe, I have settled.

While I have endeavoured to render the language of the tales simple
and free from bookish artifice, I have not felt at liberty to retell
the tales in the English way. I have not scrupled to retain a Celtic
turn of speech, and here and there a Celtic word, which I have
not
explained within brackets—a practice to be abhorred of
all good men. A few words unknown to the reader only add
effectiveness and local colour to a narrative, as Mr. Kipling well
knows.

One characteristic of the Celtic folk-lore I have endeavoured to
represent in my selection, because it is nearly unique at the
present day in Europe. Nowhere else is there so large and consistent
a body of oral tradition about the national and mythical heroes as
amongst the Gaels. Only the
byline
, or hero-songs of Russia,
equal in extent the amount of knowledge about the heroes of the past
that still exists among the Gaelic-speaking peasantry of Scotland
and Ireland. And the Irish tales and ballads have this peculiarity,
that some of them have been extant, and can be traced, for well nigh
a thousand years. I have selected as a specimen of this class the
Story of Deirdre, collected among the Scotch peasantry a few years
ago, into which I have been able to insert a passage taken from an
Irish vellum of the twelfth century. I could have more than filled
this volume with similar oral traditions about Finn (the Fingal of
Macpherson's "Ossian"). But the story of Finn, as told by the Gaelic
peasantry of to-day, deserves a volume by itself, while the
adventures of the Ultonian hero, Cuchulain, could easily fill
another.

I have endeavoured to include in this volume the best and most
typical stories told by the chief masters of the Celtic folk-tale,
Campbell, Kennedy, Hyde, and Curtin, and to these I have added the
best tales scattered elsewhere. By this means I hope I have put
together a volume, containing both the best, and the best known
folk-tales of the Celts. I have only been enabled to do this by the
courtesy of those who owned the copyright of these stories. Lady
Wilde has kindly granted me the use of her effective version of "The
Horned Women;" and I have specially to thank Messrs. Macmillan for
right to use Kennedy's "Legendary Fictions," and Messrs. Sampson Low
& Co., for the use of Mr. Curtin's Tales.

In making my selection, and in all doubtful points of treatment, I
have had resource to the wide knowledge of my friend Mr. Alfred Nutt
in all branches of Celtic folk-lore. If this volume does anything to
represent to English children the vision and colour, the magic and
charm, of the Celtic folk-imagination, this is due in large measure
to the care with which Mr. Nutt has watched its inception and
progress. With him by my side I could venture into regions where the
non-Celt wanders at his own risk.

I have striven to give
Celtic things as they appear to, and attract, the English mind,
rather than attempt the hopeless task of representing them as they
are to Celts. The fate of the Celt in the British Empire bids fair
to resemble that of the Greeks among the Romans. "They went forth to
battle, but they always fell," yet the captive Celt has enslaved his
captor in the realm of imagination. The present volume attempts to
begin the pleasant captivity from the earliest years. If it could
succeed in giving a common fund of imaginative wealth to the Celtic
and the Saxon children of these isles, it might do more for a true
union of hearts than all your politics.

Connla and the Fairy Maiden
*

Connla of the Fiery Hair was son of Conn of the Hundred Fights. One
day as he stood by the side of his father on the height of Usna, he
saw a maiden clad in strange attire coming towards him.

"I come from the Plains of the Ever Living," she said, "there where
there is neither death nor sin. There we keep holiday alway, nor
need we help from any in our joy. And in all our pleasure we have no
strife. And because we have our homes in the round green hills, men
call us the Hill Folk."

The king and all with him wondered much to hear a voice when they
saw no one. For save Connla alone, none saw the Fairy Maiden.

"To whom art thou talking, my son?" said Conn the king.

Then the maiden answered, "Connla speaks to a young, fair maid, whom
neither death nor old age awaits. I love Connla, and now I call him
away to the Plain of Pleasure, Moy Mell, where Boadag is king for
aye, nor has there been complaint or sorrow in that land since he
has held the kingship. Oh, come with me, Connla of the Fiery Hair,
ruddy as the dawn with thy tawny skin. A fairy crown awaits thee to
grace thy comely face and royal form. Come, and never shall thy
comeliness fade, nor thy youth, till the last awful day of
judgment."

The king in fear at what the maiden said, which he heard though he
could not see her, called aloud to his Druid, Coran by name.

"Oh, Coran of the many spells," he said, "and of the cunning magic,
I call upon thy aid. A task is upon me too great for all my skill
and wit, greater than any laid upon me since I seized the kingship.
A maiden unseen has met us, and by her power would take from me my
dear, my comely son. If thou help not, he will be taken from thy
king by woman's wiles and witchery."

Then Coran the Druid stood forth and chanted his spells towards the
spot where the maiden's voice had been heard. And none heard her
voice again, nor could Connla see her longer. Only as she vanished
before the Druid's mighty spell, she threw an apple to Connla.