Read Caught in the Middle Online

Caught in the Middle 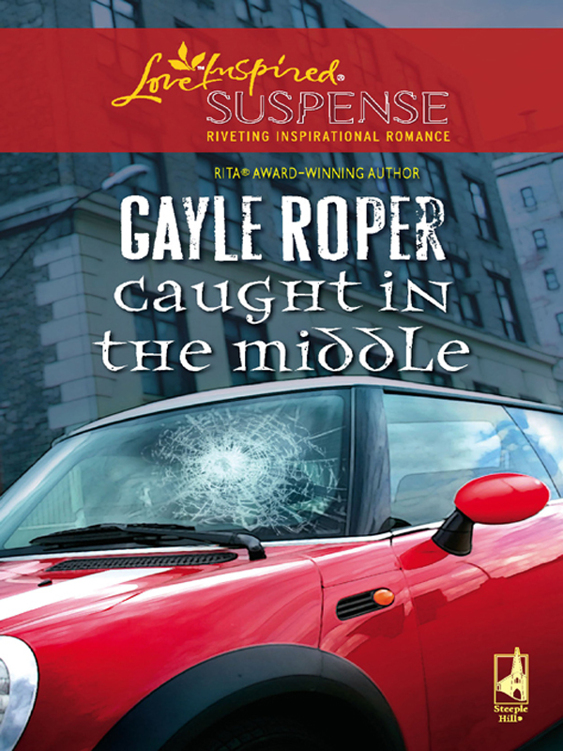 A loud sound tore the night.

I lurched and fell against the car door. Straightening, I stared in disbelief at the small hole in my windshield and the cobwebby cracks that radiated from it.

I barely had time to register “shot” when Curt, gloves off and on his knees looking for my keys, grabbed the back of my coat and pulled me abruptly down.

A second shot fragmented the side window above our heads. Little pieces of glass rained down on us, stinging our faces and getting caught in our hair.

“Around the other side of the car,” Curt ordered. “Hurry! We’re too exposed here! And keep down.”

“This isn’t some accident, you know,” I said. “It’s got something to do with Patrick Marten.”

“He’s the dead man I found in my trunk last night.”

Caught in the Middle
#50

has always loved stories, and as a result she’s authored 40 books. Gayle has won the Romance Writers of America’s RITA
®
Award for Best Inspirational Romance, finaled repeatedly in both the RITA Award and the Christy
®
Award contests, won three Holt Medallions, the Reviewers’ Choice Award, the Inspirational Readers Choice Contest and a Lifetime Achievement Award, as well as the Award of Excellence. Several writers’ conferences have cited her for her contributions to the training of writers. Her articles have appeared in numerous periodicals including
Discipleship Journal
and
Moody Magazine,
and she has contributed chapters and short stories to several anthologies. She enjoys speaking at writers’ conferences and women’s events, reading and eating out. She adores her kids and grandkids, and loves her own personal patron of the arts, her husband, Chuck.

Caught in the Middle

I will instruct you and teach you in the way you should go; I will counsel you and watch over you.

“I
t was a dark and sleety night,” I muttered as I slid behind the wheel and slammed the car door, grateful to have reached protection without drowning. I tossed my briefcase onto the seat and shook the water out of my short, spiky hair.

“Merrileigh Kramer, what have you done?” my mother had asked in horror when I’d had my waist-length hair drastically cut at summer’s end on the new-look, new-person theory.

I looked in the mirror and wondered the same thing myself. I hadn’t cut my hair, except for its annual split-ends trimming, since ninth grade. For a woman who hated change, I did a very drastic thing when I entered that beauty parlor. And it had only been step one.

Now I sighed and reminded myself that it’d grow eventually. The only trouble was that I didn’t know what to do with it while it grew. Somehow women routinely got from Halle Berry short to Halle Berry long and looked good in the process. I feared there wasn’t enough mousse in the world for me to accomplish that feat.

I eased my way across the parking lot, uncertain how slippery the millions of needles of icy rain had made things. The others who had been attending the Wednesday evening Board of Education meeting with me moved just as slowly. What had begun as a cold, nasty rain had turned to sleet when we weren’t looking.

When it was my turn to pull out onto the road, I stepped slowly on the gas. The wheels spun for an instant on the thin layer of ice, then grabbed hold.

I hated ice. Every time I drove on it, I thought of my mother and the winter’s day in Pittsburgh years ago when she had been driving me and four friends home from Brownies. I remembered the terrifying spin across the other lane and the oncoming cars scrambling to avoid us. I remembered the thud of our car as it hit a utility pole. I still felt my heaving stomach and tasted the fear. Mostly I remembered the screams and my mother’s white face and the blood from the bashed noses. The fact that no one had been badly hurt then did not ease my fluttery heart tonight.

I drove carefully, watching for trouble. At Manor Avenue and Lyme Street I detoured slowly around a pair of cars half blocking the intersection as they sat with their left headlights locked together. Their drivers stood in the rain doing a good imitation of their cars, noses mere inches apart.

I couldn’t help grinning at them, but I gripped the wheel more tightly. My heart throbbed in my temple.

With relief I turned onto Main Street where traffic was moving more quickly, keeping the road from freezing. When I passed
The News
office, the lights were still on, and I felt a surge of belonging. I beeped my horn in greeting to whomever was working so late. Don, my fearsome editor? Mac, his lecherous but charming assistant? Larry, the sports guy?

Tomorrow Don would bestow upon me the honor of writing a story about the first ice storm of the season. I knew it. Such stories were favorite ploys of editors, and as new kid on the block, I was certain to get the assignment.

I’d had worse. At least there’d be plenty of material in the police report about all the fender benders. Between the ice storm and the Board of Education meeting, I’d be plenty busy before morning deadline. Then I had scheduled the interview with the local artist. Variety to be sure.

I turned onto Oak Lane and felt the wheels slew.

Hang on,
I told myself.
You’re almost home.

I took my foot off the gas, gritted my teeth and proceeded slowly between the rows of cars parked against each curb.

Suddenly a car on my right roared to life like a lion scenting its prey. Without looking, it sprang from its parking spot, barely leaving the paint on my fender. I instinctively did exactly what I’d always lectured myself about not doing. I hit the brakes hard on ice.

Of course I went into an immediate skid. My headlights raked across the offending car as it pulled away, briefly revealing a man, hat pulled down over his eyes, collar up against the weather, staring intently ahead, completely unaware of me or anything else.

My stomach became mush and my heart thumped wildly in my ears as I skidded helplessly toward a new blue car parked on the left. I whipped my wheel into the skid just like everyone said you should, but still the shiny blue door panels with their navy-and-red racing stripes rushed at me. My headlights blazed on the chrome; the black windows loomed darkly.

But my real terror was for the man who had suddenly materialized at the front bumper of the blue car, standing like a pedestrian waiting for a clear path to jaywalk. I had no idea where he’d come from.

“Please, God, don’t let me hit him!” I was a Brownie again, panic-stricken.

His features were indistinct through my rain-washed window, but I could see the
O
of his mouth as he saw me rushing toward him. He turned to run.

I closed my eyes involuntarily against the crash, shoulders hunched, face screwed up in apprehension. I was probably screaming, but thankfully I don’t remember. Screaming has always struck me as a sign of weakness, and I like to imagine that I react with style even when I’m afraid. And I was afraid.

After a very long, slow-motion moment, my car shuddered to a silent halt. I cautiously opened my eyes and found myself mere inches from the blue car’s front fender, the two cars neatly side-by-side and too close together for my door to open. I could not have parked so well had I tried.

I slid across the seat and flung open the far door. I didn’t think I’d hit the man—I had neither heard nor felt a thump—but I had to make sure he wasn’t crushed beneath my wheels. I pressed a hand against my anxiety-cramped abdomen and climbed into the downpour.

The man wasn’t lying broken on the road. In fact, he wasn’t anywhere, lying or standing, broken or whole. He had completely disappeared.

I leaned against my car, weak with relief, and took deep breaths. I barely felt the icy sleet running down my neck. Finally I was able to move enough to get myself back into the car and, with a strange, shaky feeling, I drove the few remaining blocks home. I couldn’t wait to get there, take a hot shower and relax with Whiskers purring on my lap as I drank a Diet Coke and ate a handful of Oreos. By then my heart would probably be beating normally again.

My snug, cozy, carriage-house apartment had once been part of the estate of Amhearst’s leading citizen, Charlie Mullens, a man who’d made millions in the stock market in the twenties and had built a great mansion to forget his New York tenement beginnings. He had lost his fortune in the Great Crash of ’29 and his life shortly afterward when he drove the new Rolls-Royce he could no longer pay for into the railroad overpass. His heirs, reduced to working for a living, soon sold the gracious, money-eating mansion and moved from Amhearst.

Over the next forty years, the property passed from hand to hand, deteriorating steadily until it was razed in the early seventies. At that time the carriage house, which had sat peacefully behind the mansion unnoticed and unused, was renovated into four one-bedroom apartments, two on the ground floor, two above. A long, narrow drive off Oak Lane gave access to the quaint building, and I turned down the drive, grateful to be home.

It was still somewhat strange to me that this
was
home. Here I was, all alone in Amhearst, working as a reporter at
The News,
responsible to no one but God and Don Eldredge, the newspaper’s owner-editor.

I don’t have to do anything,
I had understood one evening during my first week in Amhearst.
I’m completely on my own. If I want to eat and pay the rent, I’d better go to work, but I don’t have to. And there’s no one here who cares enough to make me.

It had been a strange, lonely and frightening realization. There were no family, no friends, no acquaintances here. It was just me, making my own choices. The next day I went to the animal shelter and got Whiskers, a huge gray-and-white mottled cat with marvelous white whiskers. Now at least I was responsible to one living being. Now I had to fulfill at least one obligation every day, or my shins would be black-and-blue from Whiskers butting them, his special way of asking for his dinner.