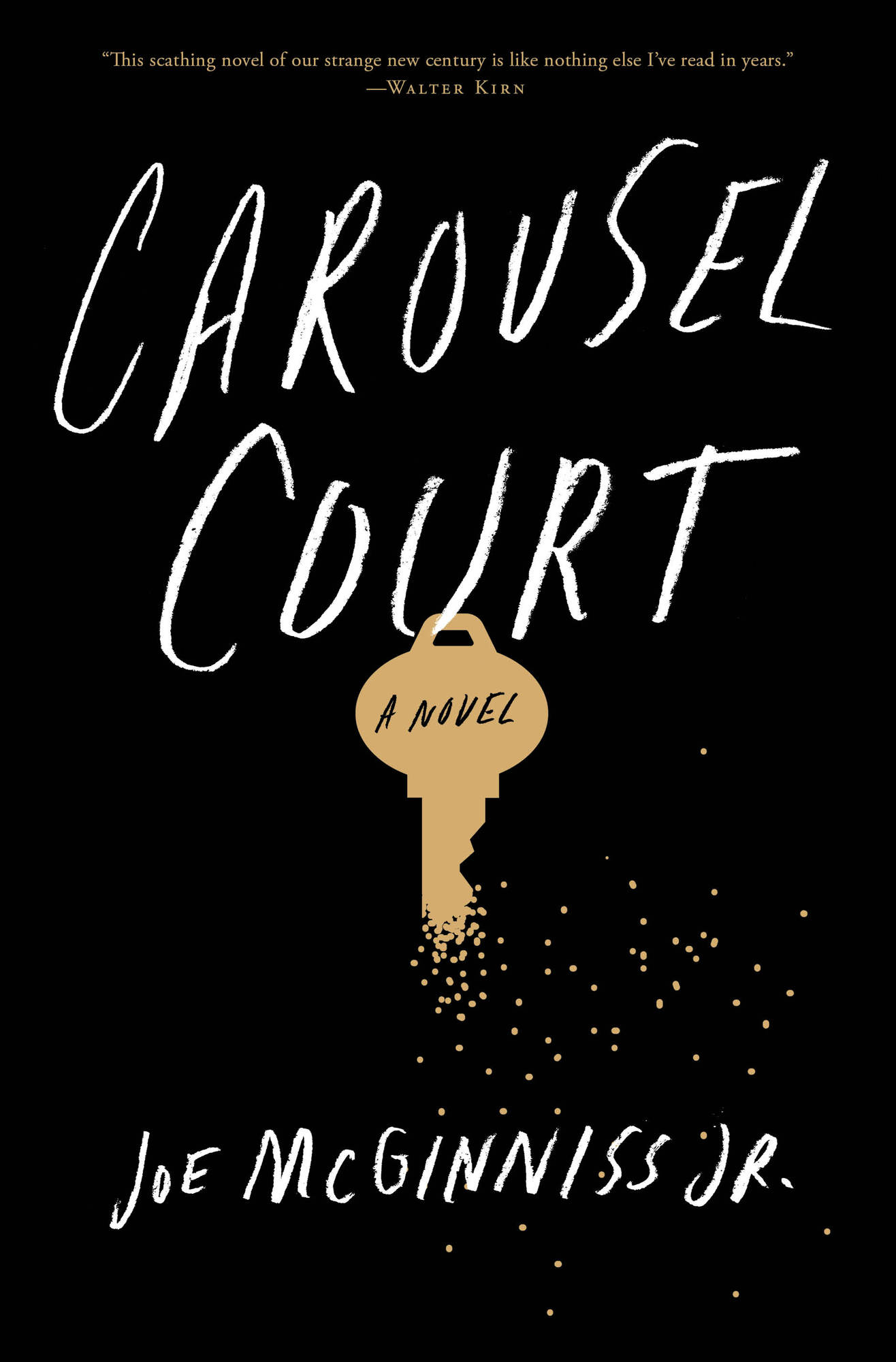 Thank you for downloading this Simon & Schuster eBook.

Sign up for our newsletter and receive special offers, access to bonus content, and info on the latest new releases and other great eBooks from Simon & Schuster. 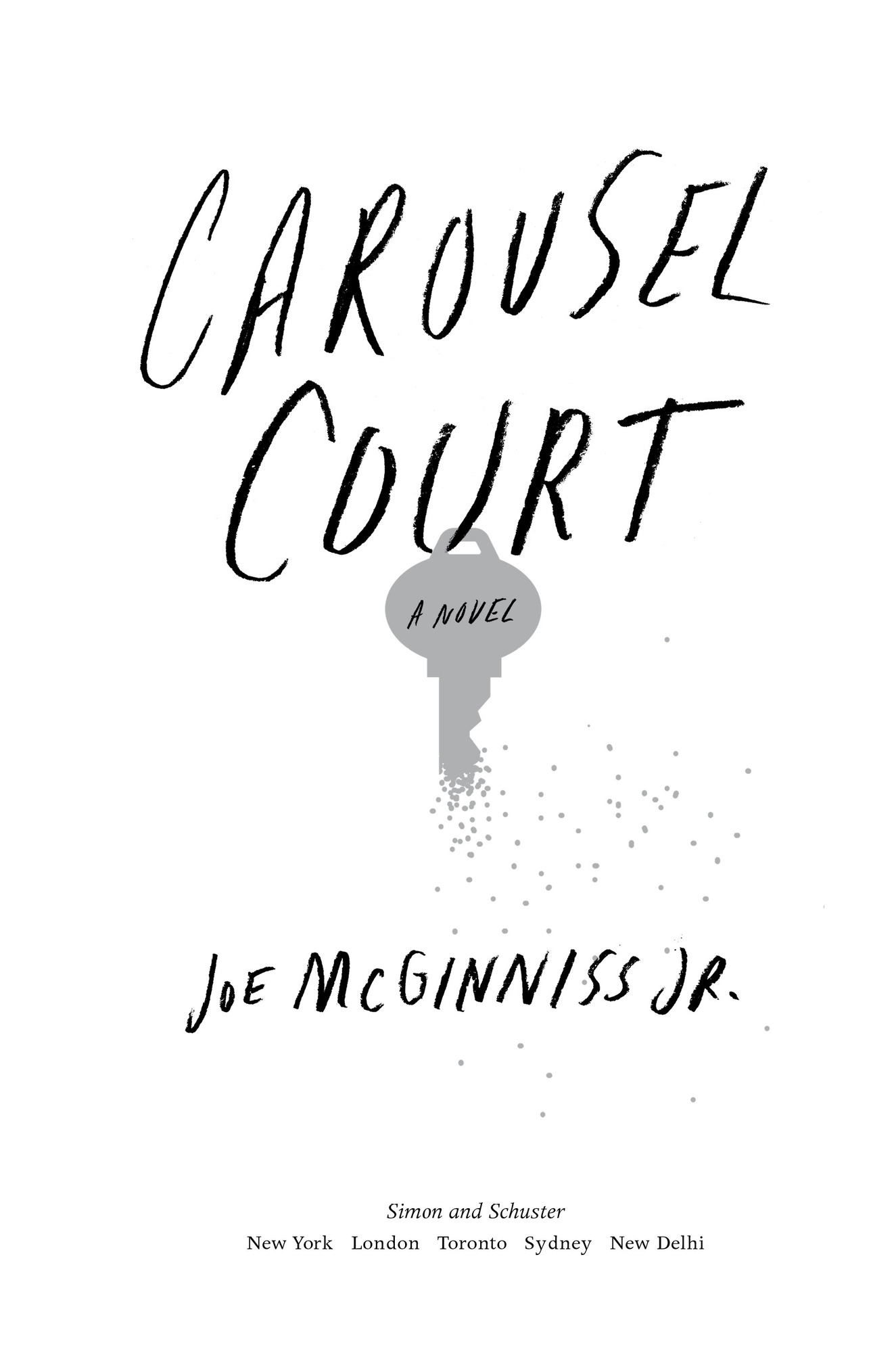 FOR MY FATHER, WHO I MISS

AND JEANINE, JULIEN, AND V, ALWAYS.

I felt very still and very empty, the way the eye of a tornado must feel, moving dully along in the middle of the hullabaloo

Slither up just like a snake upon a spiral staircase

D
ream Extreme
. Those words welcomed them to Serenos months ago, in June, before the heat. It's August now and they don't see the white sign anymore, don't pay attention to it. If they did notice it as they race along the Corona Freeway heading home, what they'd see instead would be the red graffiti tags defacing it. Nick and Phoebe Maguire make a sharp turn and pull their dirty white Â­Subaru Forester in to Carousel Court. Jackson sucks a blue pacifier. Nick pulls his Mets cap lower, shields his eyes from the wind. Everything is bathed in this orange hue, like a vintage photograph. Looking around: abandoned new construction homes, kids playing outside on a yellow lawn despite rumors of mountain lions and bobcats, pit vipers, and Latino gangs trolling for new turf. The flap of an orange tent pitched in front of a house flutters wildly in the relentless wind that roars down mountain passes and through the valley on a straight trajectory toward them. A bullet train. A single spark these daysâthe dry Â­seasonâwill burn the whole place to the ground. And there's the house. Bigger than it should be. It's not on fire, though Nick wishes briefly it were, because what it is, is worse. It's underwater, sinking fast, has the three of them by the ankles, and isn't letting go.

P
hoebe opens her eyes before the alarm. She does this lately, since they arrived. On low-dosage days the ground beneath her hardens, common sounds are shrill: Jackson's cries more urgent, Nick's words more hollow. Above her, the blades of the ceiling fan rotate too fast, send chilled air across Jackson's exposed arms. He sleeps fitfully next to her and she pulls his small blanket over his shoulders. Last night he was inconsolable or she was. She could remove the pacifier from his mouth and wake him, but watches him instead. There are fourteen bones in the human skull; eight surround the brain. She brushes his forehead where the bruise yellowed then finally faded.

It's almost seven and Nick still isn't home. Knowing how exhausted he'll be, she scrambles eggs and slices ripe mango for him and leaves them on a plate in the microwave and sends him a text telling him they're there in case he feels like skipping the morning rush at Starbucks on the way home. When she leaves the house it's already hot and Phoebe holds Jackson to her chest with one arm while her free hand pulls the heavy red front door closed behind her as the ADT chimes. Her day will be spent driving. Always driving.

At day care, she kisses Jackson's warm forehead. She says “Duck,
duck” and he says “Goose!” and laughs. She looks back once, as she does each time she leaves her son in this strip mall three miles from Carousel Court, and blows him kisses. She pushes against the glass door, out into the heat and glare of another day. She should be home with him. She hates herself.

Just after ten in the morning she's alone on a freeway that connects her to the other side of the city and all the ugly retail strips and offices, and despite the heat and harsh sunlight and the cool air-Â­conditioned car and the helicopter buzzing overhead, this middle part of each morning is a gentle breeze: the zenith of Klonopin highway happens an hour after she swallows the last of four pills. She sends Nick a rambling message, coasts and descends into the valley, and laughs at the woman in the silver Jaguar leaning on her horn because Phoebe won't leave the left lane and let her pass. You need to be on this, Phoebe thinks, and continues in the left lane doing seventy and considering another caramel macchiato. With whipped cream this time.

Soon it's one and the sun is a beast and directly overhead and she needs to eat something but she's buzzed, shaky, from two caramel macchiatos and the anticipation of her afternoon appointment. Her ten milligrams of Klonopin from this morning have worn off completely. The Effexor is losing its effect as well. The tingling in her fingertips, which feel cold in the morning, is a sign. So is her appetite: She has none. She feels empty but the thought of food makes her queasy. The front seat is littered with parking receipts, MAC lip liners, her badge, a suitcase full of pharmaceutical samples and glossy brochures, her Â­iPhone, and a stuffed Elmo doll. Normally on the floor of the passenger side would be the goodies. Mocha frappuccinos with whipped cream for the office staff, a dozen doughnuts from Krispy Kreme. Bribing the gatekeepers is the way the game is played, access to the doctors is everything, the only way to push product, improve her numbers. Show up, perform, and close.

Performing and closing: What happens in the office stays in the office unless he wants to text about it later and send crude photos after midnight. That's where she's struggling. The energy is gone. The playfulness and flirtation are labored if not missing entirely. Except today. Today, she will meet a young physician with a new practice and
she is energized, sharper than she can remember. She also has a new strategy.

Phoebe breezes into a crowded, cool office and feels the eyes of tired mothers and frail seniors and men moving over her strong, tanned calves and smooth thighs, the thin fabric of her form-fitting lavender skirt. This used to be the most entertaining part of her job. A physician back east once propositioned her in his office, offered to leave his wife and kids for her. Another put a thousand dollars in cash on his desk and asked for her panties. The female office manager of another practice accused her of stealing samples from their closet and had her banned. Phoebe knew the real reason: She was too distracting.

Today a plain-looking office manager working reception hands Phoebe a clipboard and asks her to fill out both sides of each form for new patients.

“I don't have a ton of time,” she says and waits for the doctor's eyes to drop to her legs. When they finally do, she scratches her knee, slowly uncrosses and recrosses her legs. “So,” she says as she feels her skirt slide upâclumsily, though, too highâuntil the yellow lace edge of her panties is showing. She starts to adjust it, then stops. He stares. She's off her game; the mood isn't right, the room is too bright, her thoughts bounce from one unrelated topic to the next. Does she have anything left in her checking account? Did the lock click when she pressed the button on the handle? His eyes are too blue. She should stand, go check the door, but her skirt is still too high and he's still staring. Then she realizes she doesn't care what he sees or who walks in or what she does because all that matters right now is getting what she came for.

“I need you to write me a prescription.” She interlaces her fingers on her lap. She's trying too hard to look calm.

“Klonopin. You know, Clonazepam.” She closes her eyes. “The good stuff.”

She laughs and wipes her nose for some reason. “It's the driving. It's bad out here. I'm not used to it.”

The doctor is forty, his brown hair flecked with gray, clean-shaven. His wedding band is silver and thick. He wears an expensive-looking pale blue button-down shirt and black slacks and shoes. He sucks on a mint. He takes no notes as he listens to her explain her medical history.

“I know I scheduled a physical but actually I just need the 'script.”

“Where is it coming from?” he says, meaning her anxiety.

She sighs. “You know, the usual tribulations. Can you write me something?”

“What other medications are you taking?”

On her way here, stuck in traffic, Phoebe had watched a skinny, wrinkled woman with bleached-blond hair in a floral bikini and Coke-bottle shades push a stroller with two big kids in it along the side of a six-lane thoroughfare. Those kids, she thought, had to be at least seven years old. The woman looked fifty. The exhaust and heat and sun beat down, and Phoebe had wondered how far she herself was from that, how much debt and desperation until she would be reduced to walking through the vapors.

“Where are you from?” the doctor asks.

“Boston. Delaware before that.” She exhales and crosses her legs again, and the doctor's not looking. “We were moving to New Orleans.”

“You don't sound too happy about that.”

“We had other plans.”

He stares at her with a sympathetic smile. “What brought you out here?”

The question makes her femur throb, and she feels a flash of pain from the fourth and fifth vertebrae to the top of her skull. “See this?” She pulls up her top, touches a long thin scar along the right side of her torso.

“What does your husband do?”

A long pause. “A PR firm. He's a filmmaker,” she says, referring to Nick's position that prompted the move here. “Produces films for corporate clients, mostly.”

“Get undressed.” He hands her a white paper gown and walks toward the door.

Phoebe watches him go, sees the exam table on the other side of the large office. Before she can say anything, the door closes and he's gone.

Hung on the wall: a framed spread from the
Los Angeles Magazine
Best Doctors issue. As she undresses, Phoebe studies the picture of the physician and his wife, casually seated together in an oversize white Adirondack chair. Wrapped around them are two beaming blond children, a pair of Chesapeake Bay retrievers at their feet. She loses herself in the lush green lawn and the sprawling estate. She's pretty sure they're not staring down a readjusting ARM. Their smiles are so easy and infectious that she feels the corners of her mouth begin to rise as the physician knocks on the door and pushes it open in one motion.

With Phoebe on her back, the physician slides the paper gown to her hips, leaving her upper body exposed. He presses his fingertips too firmly into her midsection, checking for organ swelling, unusual masses. “What is that?” he asks, breathes in through his nose. “Like cotton candy.”

He laughs. “Is that the goal?”

“You have how many children?”

His hands hover over her abdomen. She feels warm and sleepy. Her throat is dry.

“I can't stand in line at Whole Foods without getting dizzy and my heart racing,” she says.

“I keep dreaming about water. About my son drowning. Is that normal?”

Phoebe nods. She shifts on the table.

He rests both hands on her forearm. “Recovered nicely. My wife struggled after.”

“She looks well-rested. What does she do for a living?”

“Right here.” His hands press softly against the area just below Phoebe's navel, where they stay. “Some excess here. Not on you, though.”

Checkmate in Amber by Matilde Asensi
The Man Who Killed Himself by Julian Symons
Wild Nights by Rhea Regale
Claiming His Fate by Ellis Leigh
Flash Burned by Calista Fox
One Witch at a Time by Stacy DeKeyser
Sombras de Plata by Elaine Cunningham
OUTNUMBERED volume 2: A Zombie Apocalypse Series by Robert Schobernd
Resilience by Elizabeth Edwards
Reluctant Relation by Mary Burchell