Read Careful What You Kiss For Online

Careful What You Kiss For 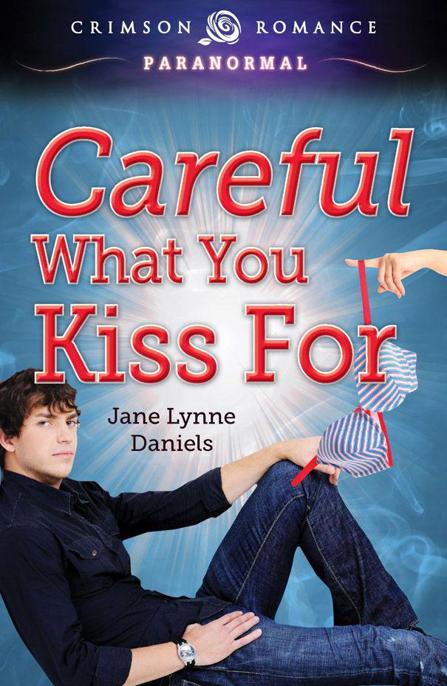 Careful What You Kiss For
Jane Lynne Daniels

This is a work of fiction. Names, characters, corporations, institutions, organizations, events, or locales in this novel are either the product of the author’s imagination or, if real, used fictitiously. The resemblance of any character to actual persons (living or dead) is entirely coincidental.

The sidewalk sign, scuffed at each corner, teetered on three legs in the breeze.
Madame Claire, Psychic. Predictions with a 95% success rate.

Great. Tensley could see the follow-up survey now.
On a scale of 1 to 10, how accurate was the prediction that you would continue to fall for lying, cheating bastards … ?

Still, she’d promised her best friend Kate she’d drive clear across town to see Madame Claire. And a promise was a promise. She squared her shoulders and marched up the stairs.

Once inside, she jammed her sunglasses on her head and looked around, letting her eyes adjust to the change in light. The room was small, with wood floors, an overstuffed sofa, two straight-backed chairs and candles scattered on a tray atop a black table. The smell of incense floated through the air as soft music played.

A door opened and out stepped a woman whose face was a good fifteen years younger than her neck, around which hung a necklace with a large ruby-colored pendant. She wore a shade of lipstick so bright that it drained most of the color from her cheeks, and on her feet, red heels.

The woman clasped her hands together. “So you have come.” An unfamiliar accent hovered around the edges of her words. Russian? Transylvanian?

“Indeed.” A deep nod. “I have been waiting for you.” She stepped aside to motion Tensley through the door into a room lit only by a small lamp with crystals dangling from its edges.

Once they were seated on opposite sides of a table, Madame Claire closed her eyes and bent her head. After a moment, she opened her eyes and reached across the table to take Tensley’s hands. “You have regrets.”

Tensley’s laugh burst like a popped balloon. “Me and every other human being on the planet.”

“Sorry.” The woman deserved a chance, at least. “Go ahead. Please tell me what you see in my future.”

Dark eyes met hers. “Your regrets concern a man.”

“They do not.” Her swift answer carried a warning.

Perfect. A psychic who didn’t have the sense to back away from a cement wall when she smacked into it.
“Doesn’t matter,” Tensley said, teeth clenched. “I’ve moved on — ”

Tensley pressed a fist against her stomach. If it weren’t for the promise to Kate, she would have put money on the table and left without saying another word. Instead, she made a conscious effort to keep her butt in the chair and her mind clear of emotional derailments. “Tell me what you see in my future.”

“You did not understand what he was trying to do.”

Ha. She
understood
, all right. Bryan-with-a-y-not-an-i had wanted sex, over and over, before returning to the wife and baby he hadn’t thought to mention. Only Tensley had thought it was something else.

“He was young. So young,” the psychic went on.

He was a player. A freaking French-speaking player. He was —
wait.
So young? Not that young. Thirty-two, same as her.

Hold on. This woman did not know — she couldn’t. “Stop. Talk about me!” Tensley’s voice hit the high-pitched tremble that gave her away when she was nervous. She hated when that happened. “I’m going to get a fabulous new job.”

Bet you don’t get many repeat customers.
Tensley tried to pull one hand away, but the psychic kept it locked in hers, rings pressing into Tensley’s skin.

“Ahhh,” breathed Madame Claire. “Yes. His eyes are blue. An unusual blue. Dark. Like the depths of the ocean.”

Tensley froze. Not possible. She couldn’t know about Max. It had been years ago. A lifetime ago.

Once again, the psychic’s eyes met hers. “Your first love.”

Tensley stopped breathing. The feel of Max’s warm, strong fingers stroking her body, cupping her breasts with fierce tenderness and moving slowly downward … came rushing back. The moon shining down on them. Max’s body, muscles rippling, ready to take her places she’d never been, wrapped in his arms. The smell of the grass that cradled them, mingling with the clean Tide smell of the blanket they laid on. Max’s blue eyes darkening with passion.

Heat flowed through her at the remembered imprint of his body on hers. How it had felt to have him inside her. Filling an emptiness she hadn’t known existed until then. Like nothing she’d ever known before. Or since.

Tensley’s eyes squeezed shut. “Next topic,” she managed to say.

“A woman, she never fully lets go of her first,” Madame Claire said.

He’d whispered how beautiful she was, how she took his breath away, how there was no one else like her. She’d believed him. “Not true. I let go of my first.” Her voice broke, betraying her.

“This may be what you believe.”

Tensley’s eyes flew open. If she were prone to violence, this woman would be in trouble. “So I made a mistake. A big one. Lucky me.
He
had to be my first.” She’d caught Max kissing another girl.

“I tell you this, with love comes mistakes.”

“Ah, but he did. You trusted your eyes instead of your heart. You did not understand.”

“I should have stood around waiting to ask?” Tensley leaned forward, her voice rising. “When he came up for air?”

Seconds ticked by as Tensley swallowed the memories. Instead of going down, they caught in her throat, making it ache.
Damn it.

“Every woman, she knows her worst mistake. Yours has to do with this man.”

“Tell me, please,” said Madame Claire, “if you could have … ” She gestured with her hands, as if they could help her find the right word, “a do-over … yes, that is it, what would it be?”

“This isn’t Nordstrom. You can’t return parts of your life.”

“In your world, perhaps. However, in mine, it is different. You can once. But only once.”

Ohh-kay.
Maybe Kate had been inhaling the anesthesia in her vet office when she’d sworn Madame Claire would help Tensley move on from Bryan. “A do-over.” Tensley eased her fist from her stomach and threw out the first thing she could think of. “I guess I would have punched Rhonda the Skank when I had the chance.”
Instead of running away in tears.

“Rhonda Reardon. From high school.” Tensley could still picture Max’s hand on the tight jeans that covered Rhonda’s ass, his mouth on the lips of the girl who allegedly carried a knife and boasted about a tattoo most of the football team had seen.

Tensley started to tell Madame Claire to forget she’d brought up something so stupid, but stopped before the words came out. She’d always regretted not letting Rhonda have it. Awkward girls had their dark sides, too.

“I see,” said Madame Claire. “If this is what you choose, then it shall be so.” She sounded relieved.

Tensley straightened. What did she mean by that?

“We all have regrets,” the psychic went on. “Yours, however, run deeper than many. It was the same with your friend Kate.” A pause. “Before.”

“Before what?” A bad feeling crept up Tensley’s spine.

“She was at one time in a very different place. But she carries this regret no longer and that is why she sent you here.”

“When you leave here, you will have indeed punched Rhonda … the
Skank
, as you call her, when you had the chance.”

“That’s — not possible.” Then Tensley pictured her fist connecting with Rhonda Reardon’s nose. Saw the blood mix with layers of Cover Girl makeup to form a globby mess that ran down the front of Rhonda’s tight shirt and made suicide leaps off the ledge of her gigantic boobs.

Tensley smiled, surprising her face muscles, which had been as good as frozen for days. What was the harm in pretending? She got it now. Why Kate had sent her here.

With a glance at the clock, Madame Claire said, “But you are to tell no one. You must make me this promise.”

Tell them what exactly, that a psychic had told her she could do the impossible? Then her mind made another leap, imagining Max’s stunned expression if she
had
decked Rhonda. She saw herself walking away from them both, chin held high, while Rhonda wailed and Max left her there to cry into her giant boobs/flotation devices and instead follow Tensley.

“You are to promise,” the psychic repeated, louder this time. “If you speak of this, events would unravel most unpredictably.” She shook her head and muttered something under her breath.

Tensley leaned forward. She’d only caught a few of the words, but they’d sounded like all hell would … “Excuse me?”

Tensley sat back, folding her hands in her lap. “Even Kate? She’s the one who sent me here. If I don’t report back, she’s going to wonder.”

“Only her. No one else must know.”

Madame Claire stood. “Our time has ended. You will go now.”

Not a moment too soon. Tensley’s chair screeched as she pushed it back to also stand. She hesitated, though, before turning to leave. “You do also see good things ahead for me?” She hated how much she wanted the answer to be “yes.”

For the first time, the shadow of a smile curved around Madame Claire’s lips. “That is up to you and how you look at your journey.”

Her journey. So far, Tensley’s journey had veered from her internal GPS at least a dozen times. Any more route recalculations and she’d be watching
Jeopardy!
in a nursing home before she decided whether she wanted to have kids.

“Right.” As though it would have been so hard for the woman to throw her a crumb, like hearing from an old friend, getting unexpected good news. Something.

Sometimes Kate had great intentions, but really bad ideas. Tensley lifted her hand in goodbye and power-walked toward the door to the shop. As her foot crossed the jamb, she heard a noise behind her and turned to see Madame Claire raising her arms slowly, silent lips moving. A white light flashed over the psychic’s head and sparks rained down, obscuring the woman.

Holy shit.
Tensley stumbled and had to put a hand out to catch herself. When she looked back, the psychic had gone. So had the light. If … it had ever been there in the first place.

Feet squarely beneath her this time, Tensley stepped outside, the bright sunlight such a painful contrast to the dark shop that her eyes squeezed shut. She barely had time to take a breath before there was a whoosh that whipped her hair straight back from her head. When she managed to open her eyes again, the light was muted, different. Not sunlight.