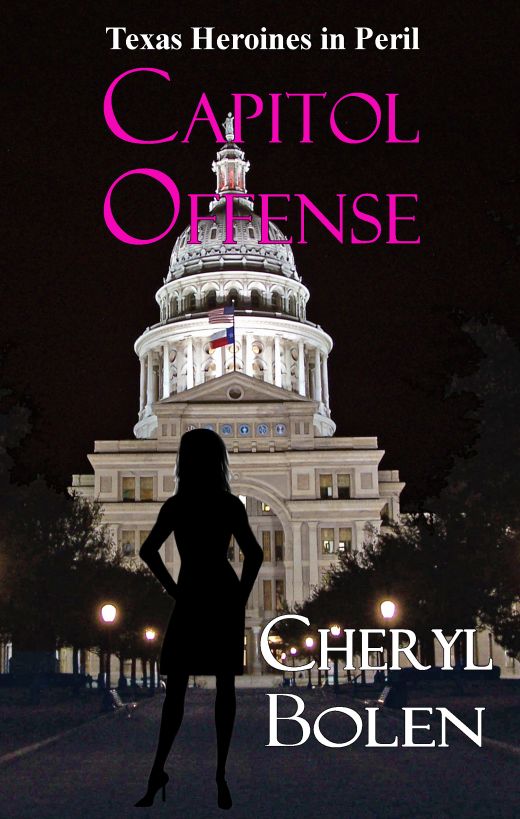 As speech writer to the Texas lieutenant
governor, lovely Lacy Blair accidentally stumbles onto a high-level
fraud involving state funds and masterminded by her boss. Since she
can't risk snooping into the situation herself, she secretly
consults with an FBI agent who agrees to help her investigate. Soon
afterwards, she realizes she is being watched, and the FBI agent
has been killed.

Terrified for her own safety and hungry for
justice, she flees. But where can she turn? Who can she trust? Her
former lover, Mike Talamino, is the only person she could ever
count on. But will he agree to help her? Can she endanger him,
too?

A Cry in the Night

A Lady by Chance*

The Brides of Bath Series

To Take This Lord
(
previously titled
An Improper Proposal)*

With His Lady's Assistance

It Had to Be You
(Previously titled
Nisei
)

Copyright ©
2012
by Cheryl
Bolen
Published by Cheryl Bolen at Smashwords

Capitol Offense
is a work of fiction. Names, characters, places,
and incidents are the products of the author’s imagination or are
used fictitiously. Any resemblance to actual events, locales, or
persons, living or dead, is entirely
coincidental.

No part of this publication may be
reproduced, stored or transmitted in any form or by any means
without the prior written permission of the author.

The cab stopped in front of the Alamo. It
was the only place Lacy Blair could think of to tell the driver.
She'd been to San Antonio a few times, not long enough to master
any street names but long enough to soak in the city's colorful
Mexican influences. Not that those colorful influences crossed her
mind today. Only one thing was on her mind.

She felt certain no one would be able to
trace her here, and that knowledge might just ease her mind long
enough for her to devise a plan of survival.

She paid the fare and fell into step with
the throngs. If her memory served her correctly, the river's big
mall was a few hundred yards from the Alamo. That must be where all
the tourists were headed.

Within two minutes she was inside the
three-story shopping center. River Center was its name, she had
rediscovered. From the comfort of air conditioning, she could peer
from the massive glass walls and see the river's termination, see
the docking station where flocks of tourists waited to board the
next river boat.

Though she wanted – no, needed – to get lost
in a crowd, she could not take a chance on attracting attention,
could not risk being remembered. She strolled every corridor of the
busy mall. She had to keep going, but not over the same aisles.
Someone might notice.

In her navy suit and
pumps, she was out of place. Her first instinct had been to
purchase casual clothes and
low-heeled
shoes. But she could not
risk using her credit cards. Those who wanted her dead had vast
resources with which to trace her.

Hell, she couldn't even use her cell phone
for the exact same reason.

She exited the air
conditioning and found herself walking along the
Paseo del Rio
. Ah!
Another memory. The city's notable tourist attraction – other than
the Alamo – was called the
Paseo del
Rio
. River Walk.

Swinging her shoulder bag
nonchalantly, she fell in step with the parade of those making
their way along the
Paseo del
Rio
. She was struck by how many uniformed
young airmen she saw. Then another fact surfaced. Baby-faced
teenagers, submitting themselves to head shaving and rigid
inspections of their crisp blue uniforms, came from all over the
country for basic training right here in San Antonio.

Before long, she found herself walking along
the tree-shaded river bank, periodically looking over her shoulder
to see if anyone were following her. Everything seemed normal, and
she wandered into the midst of another swarm of busy pedestrians,
most likely hurrying to dinner shared with loved ones. They seemed
indifferent to the cobblestone paths and tropical foliage
surrounding them at every turn.

Below the busy streets of the metropolis,
the river cut its lazy bed through the towering city. And all along
its generous path sprawled miniature jungles of tropical greenery
and trees as strong and powerful as the river itself. Borders of
red day lilies, orange and yellow zinnias, and pink, purple and
white petunias colored the walk.

Lacy admired man's hand in this setting. The
alternating limestone and pebbled walkways relieving the drab slabs
of concrete blended well with nature's handiwork. Even the
riverside restaurants did not detract from the charm. One sidewalk
cafe had been built around a massive oak tree.

What Lacy liked most about the River Walk,
especially now that she wanted to be lost in a safe crowd, was that
it was designed for the masses to enjoy.

She looked behind her
again. Two men in western shirts, hats, and boots followed. This
was the second time she had noticed them. It seemed unlikely the
two men were tourists. She wondered what they were doing on
the
Paseo del Rio
when she realized with sickening clarity they were following
her. She told herself to stay calm, not to fall to pieces. Her
safest course would be to stay where the most people were. They
couldn't get her as long as there were this many
witnesses.

Her brisk pace continued. She looked back
only after each major bend of the river. The two men remained ten
to fifteen feet behind her, careful not to stare.

She considered summoning
one of the frequently passing river patrol boats for aid but
discarded the idea because the authorities might also be seeking
her. Either alternative could prove fatal. She could see the news
headlines now: ...
shot while fleeing
police
.

How long could she keep this up? A couple
more hours, then what? She didn't have a weapon. And there was no
one to whom she could turn. Her thoughts suddenly pivoted to Mike.
He would know what to do. But she didn't want to endanger an
innocent person.

Her only hope was eluding them, and her
chances of doing that would be better after dark. She was hungry
and her feet hurt, but she would have to keep walking until
then.

In the murky waters of the San Antonio River
meandering beside her, Lacy saw her own reflection. Trim figure,
neat shoulder-length hair. If only she hadn't worn high heels that
morning. She was starting to limp.

Strangely, she felt no pain. Only numbness.
Lacy had experienced all the fear her system would tolerate in one
day. Though her legs mechanically moved, she was weary. And almost
ready to sit down on one of the riverside benches where she could
be overtaken by the two. But from deep within, she pulled strength
and kept up her pace, straining from time to time to catch pieces
of the men's conversation. They spoke in hushed tones, their words
strung together into mush she could not understand.

At the L-shaped curve of the river, Lacy saw
a broad, concrete stairway she could take to the street twenty feet
up. The stairs would carry her near the HemisFair Plaza, a vast
remnant of the almost forgotten world's fair of 1968. She stepped
on the second step and turned to look back in a casual manner. The
two men were not there. She climbed to the top of the stairs and
pivoted, coming back down again, her eyes sweeping over the dense
flow of people, searching for the two men in western shirts.

They were nowhere to be seen.

Furious at herself for foolishly suspecting
innocent passersby of following her, she knew she would have to
find help or she would soon lose her sanity. Why did her thoughts
keep riveting to Mike? She went back to the riverside again and
walked past sidewalk restaurants and what would be gala night spots
in a few hours when the blanket of darkness covered the city.

Eventually, she got off the river walk and
found herself in a section of downtown which had undoubtedly been
prosperous several decades ago. But that was no longer the case.
Now it was a refuge to those Spanish-speaking immigrants who had
crossed the Rio Grande in search of a better life for their
families.

With an unfamiliar flutter in her stomach,
she thought once more of her former lover, Mike Talamino.

He was the finest man she had ever known.
When he had come out of law school he had turned down a law firm
job offering an annual salary of nearly a quarter of a million
dollars. Fluent in Spanish, he had taken a modest-paying job with
the Central Texas Legal Defense League where he could help
Hispanics. He obtained divorces for abused young mothers and fought
against corrupt landlords.

Then, Lacy thought with a little catch in
her heart, he had moved to Houston to take a position as a civil
rights attorney for the U.S. Department of Justice. It hurt too bad
now to remember their break-up.

Everywhere she looked she
saw brown people. She wondered what this land had looked like two
centuries earlier when Spaniards had settled it, long before the
Anglos had come. Each snatch of conversation she heard now was in
rapid Spanish. Signs written in Spanish beckoned from behind each
store front window. She smiled when she mentally translated one
which read:
Zapatas
$9.99.

It was while she was smiling that she saw
the policeman. She could hardly have missed seeing him because the
sidewalks here were nearly empty. He headed toward her, his eyes
never leaving hers. How could she escape him? He was fifty yards
away. She continued walking toward him. Changing course might
arouse suspicion.

His gaze swept past her, over her shoulder.
Perhaps he wasn't after her. They couldn't know she was in San
Antonio, she tried to assure herself. Still, she quivered inside
and considered escape routes in the upcoming block. The store on
the corner had entrances on both blocks. If necessary, she could
run through it, coming out on the intersecting block.

She did not want to attract his attention,
but as they drew near each other, she looked him in the eye.

She forced a smile and walked quickly past
him, her body trembling uncontrollably.

She kept turning back, making certain he was
not watching her. He never looked back.