Read Call Us What We Carry Online

Call Us What We Carry (6 page) 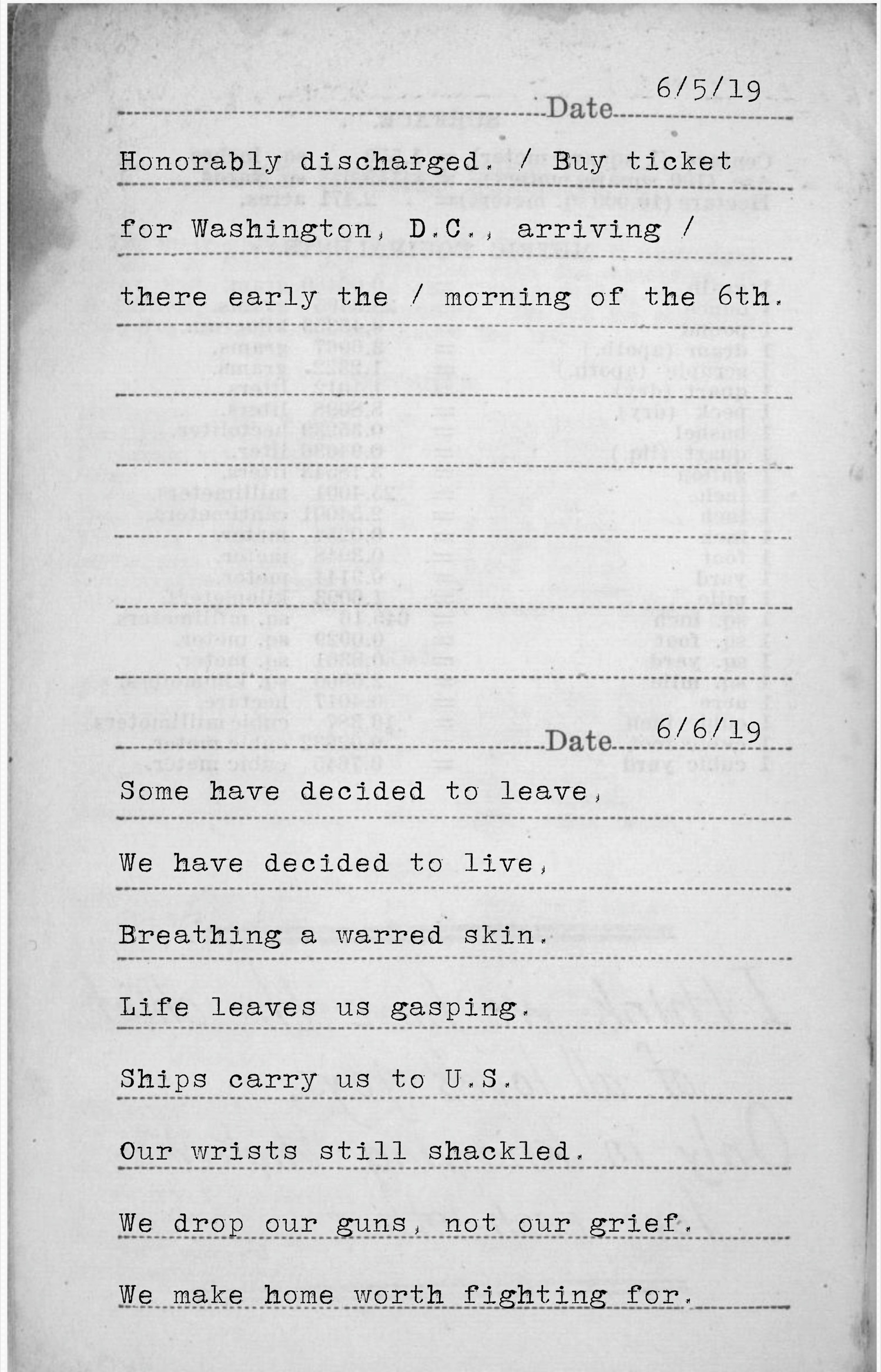 The prose portions are his original diary entries, while the verses are my own creation, where I imagine new writings. In writing in Corporal Plummer’s voice, I wanted to do so in a form that embodied his concise language. The lined papers used as a journal background in this piece
are scans of blank pages in Plummer’s original diaries. The haiku was particularly fitting—many of Plummer’s entries are one to three sentences, & the haiku is three lines, their five-seven-five syllable pattern demanding an economic use of language.

How much toilet paper,

Even hope, is rare & rationed,

This mask is our medal of honor.

It has our war written all over it.

The 1918 influenza killed 50 million people (though some scholars suggest it could be 100 million), far more than those killed in World War I. The death toll of the influenza was intrinsically tied to warfare. The movement of large numbers of troops across the continents contributed to the spread of the virus; meanwhile millions of noncombatants were uprooted from their homes. The influenza was particularly devastating to Indigenous communities, which had already barely survived ethnic
cleansing campaigns. No matter what we’re told, violence is never little.

Everything fits into its mesh mouth.

Down the globe whole.

The bullet is a beast, as are we.

Are the hardest ones to win.

The first step in warfare & pandemics is the same:

Isolation, to rupture the channels of communication of virus/violence.

The British pioneered cable cutting during WWI, using the CS
Alert
to dredge Germany’s underwater telegraph cables. Wartime censorship also slashed communication & truth-telling; the US Sedition Act of 1918 outlawed speech or expression that damaged the country’s image or war effort. Fearing punishment, newspapers minimized the threat of the virus, often refusing to print doctors’ letters warning the public not to gather or travel. This
censorship & misinformation only contributed to the further communication of influenza across the country & globe. Fire barrel of the throat. Words, too, are a type of combat, for we always become what we refuse to say.

We offer a question:

The First World War was once called “Great,”

So named “The War to End All Wars.”

What is called “great”

But what is good is worth our words.

To be good is to be larger than war.

It is to be more than great.

The body is a walking

But bloodshed in war is no misfire.

Perhaps
casualty
means that war itself

Is the accident, unmistakably a mistake,

The second step in warfare & pandemics

Is the same: continuation,

To uphold remaining modes of connection & communication. Writing letters to the home front was encouraged among WWI service personnel & volunteers abroad so as to raise national morale. The British Army Postal Service delivered around 2 billion letters during their involvement in the conflict. In the US, 1917’s General Orders No. 48 stated that “Soldiers, sailors, and marines assigned to duty in foreign countries are entitled to mail letters ‘free’ ” . . . by marking on the envelopes On
Active Service . . . During the war, A. E. F. Camp Crane in Allentown, Pennsylvania, reported its post office handling nearly 70,000 pieces of mail per week. The home front is a pen. Pen us in. We swear we can be good.

There is no such thing as gentle war.

There is no peace

That can’t be flung aside.

Our only enemy is that which would

Make us enemies to each other.

It is the only thing

With a mouth wide enough to speak

When we have nothing left

To say. All this to say,

Is an essential service.

It is how we end it.

Peace is a place on earth.

A century past World War I, condolence cards sold out in 2020. A majority of United States Postal Service users agree that receiving letters raises their spirits & one in six send more mail now during the pandemic. In pandemics, everything is scarce except for grief. Writing, truth-telling to one another, is an act of hope-making when hope is hardest found. What place have we in our histories except the present.

The hole in the eye

Through which light travels.

With
pact
. That is to say, harmony

Is a tomorrow we agree on.

To contagion than combat.

But a virus, just like a war, separates us

From our fellow people.

Yet if we are willing, the cut

Can be an aperture, the hole

Through which we reach for the whole

A virus is fought inside us,

While violence is fought amongst us.

In both, our triumph is not in conquering others,

But conquering the most destructive agents

& instincts that we carry

Within our mortal forms.

Hate is a virus.

A virus demands a body.

What we mean is:

Hate only survives when hosted in humans.

If we are to give it anything,

Let it be our sorrow

To love just may be

The fight of our lives.

The ship calls you man. Bullet, refrain from going into public places. Service is putting good to all civil rights, causes, nations, our form. O order so vicious has been issued in many. Democracy before war.

§§
April 1918 letter from Mrs. Ida B. Wells-Barnett, President of the Negro Fellowship League, to United States President Woodrow Wilson. In the letter she protests General Ballou’s Bulletin Number 35 for the 92nd Division, Camp Funston, Kansas, which urged officers & soldiers of color against entering public places where they were unwanted due to their race. National Archives. 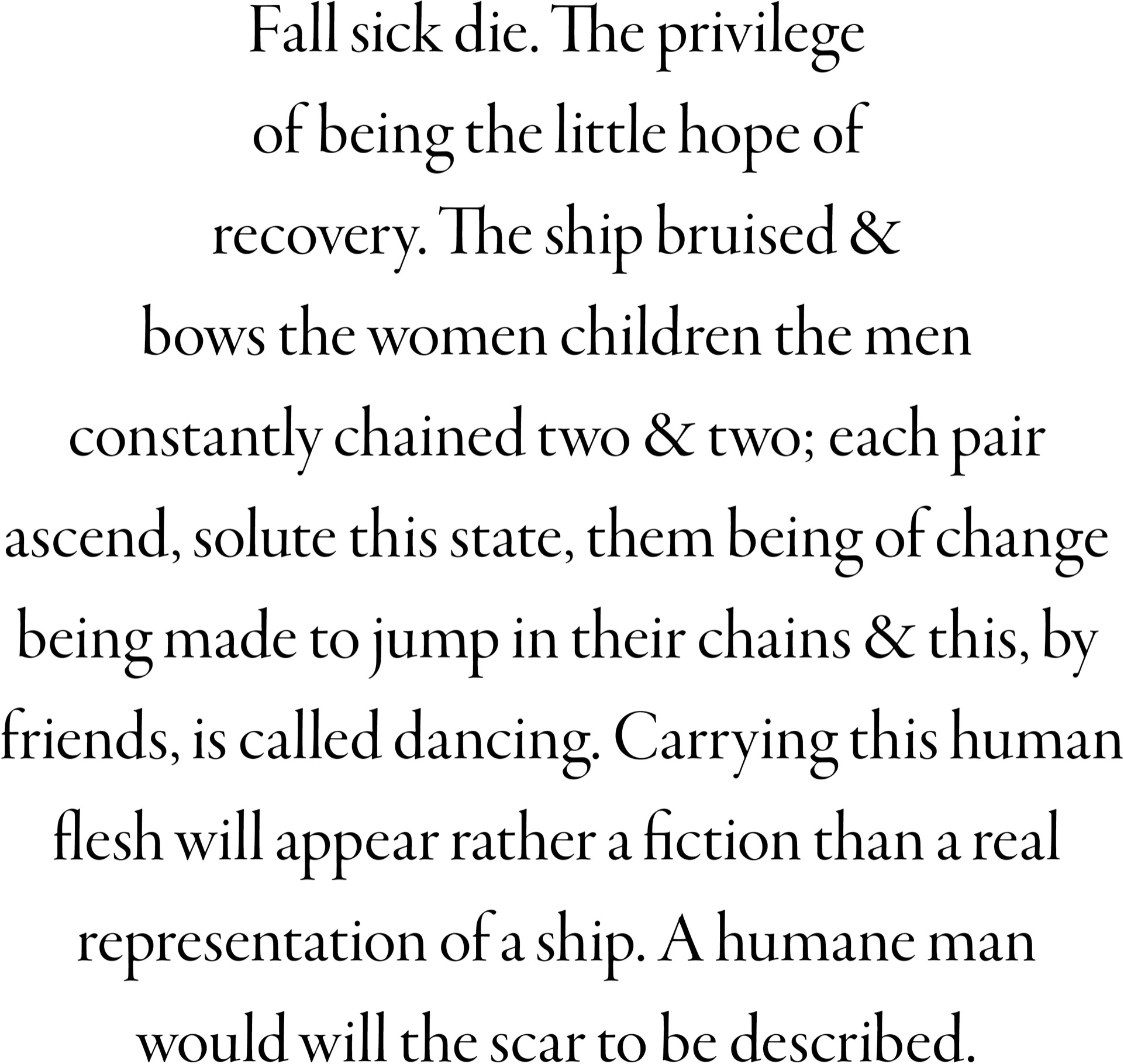 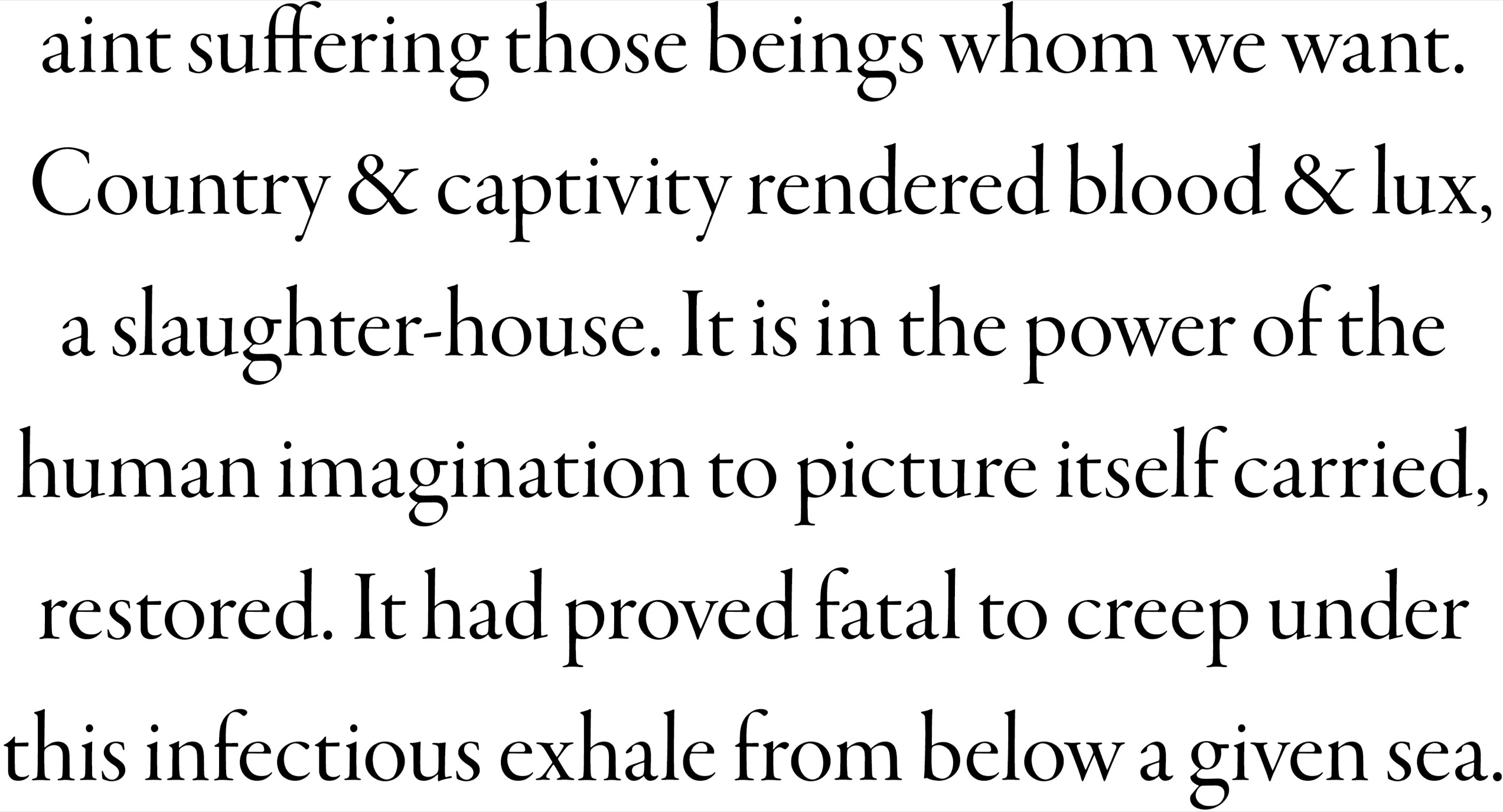 *
Description of a Slave Ship
. London: Printed by James Phillips [for the London Committee of the Society for Effecting the Abolition of the Slave Trade], 1789. Two broadsides. This is perhaps the best-known depiction of a slave ship. Its images of enslaved Africans packed like sardines is most recognizable, while the narrative description printed below it, which is just as harrowing, rarely receives the same attention.

No one would touch you anymore, you said

Your friends had become afraid & could not hold you close.

The word is not in my vocabulary

Afraid
is absent from our vocabulary

Is fate because of fear

You know, don’t you,

Even those you never knew remember you.

We will do our best to see

That no one will have to live without love

Refusing to come into your room

& when they did, they were covered in plastic gloves

Please forgive us for getting carried away.

We did it for two reasons—

For all who’ve been lost

We could change things

We could stop the epidemic

We could save you

In the end, of course, we could not

Speak those names found by humanity.

Now
cannot put love into the past tense

Above all, love—love very much.

If love could cure!

Each day slowly could not breathe.

Our memories are you.

Lonesomeness is a never-ending ache.

We were barred from seeing

To see to mourn

We tried to forget.

We just can’t let go yet

The best way is with poems

We have held this hope with the rest.

We stood & did not see death.

From the world to whatever awaits.
¶¶

¶¶
This documentary poem was made using the letters of contributors to the AIDS Memorial Quilt, each hand-sewn panel of which pays tribute to those who died from the disease. First displayed in 1987, the Quilt is now part of the National AIDS Memorial. As of 2021, it spans 1.2 million square feet & includes more than 48,000 panels. According to UNAIDS, 27.2 to 47.8 million people have died from AIDS-related illnesses globally since the start of the AIDS pandemic.

Cube Route by Anthony, Piers
Gabriel's Stand by Jay B. Gaskill
The Witch Hunter's Tale by Sam Thomas
The Bloody North (The Fallen Crown) by Tony Healey
Rich Pickings by Ashe Barker
Web of the City by Harlan Ellison
Breathe Me (A 'Me' Novel) by Williams, Jeri
The Hitchhiker's Guide to the Galaxy by Douglas Adams
Frankenstein's Monster by Susan Heyboer O'Keefe
K is for Knifeball by Jory John