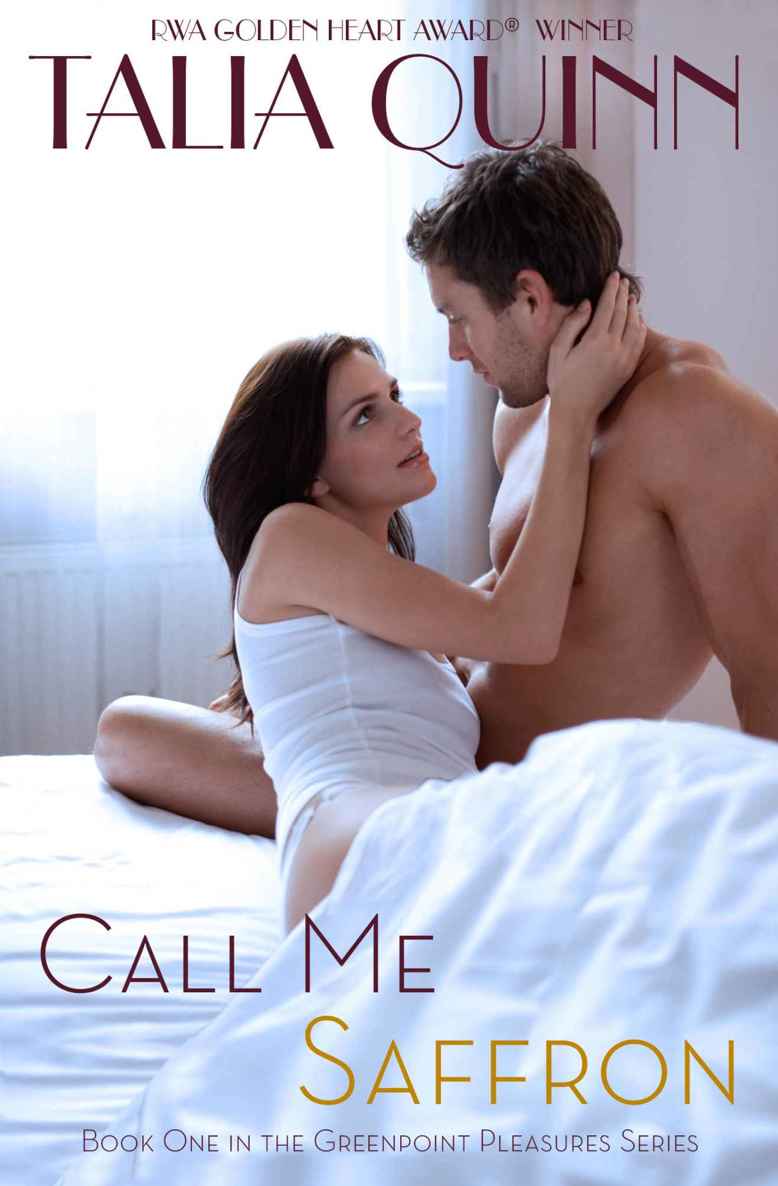 I’d been picking up on the signals for a while, but I thought I’d sent enough
not interested, thanks
signals back to get the point across and forestall the Big Approach.

Apparently not. Rudy came over to my workstation as I slid the large blueprint into its protective portfolio and turned to my computer, preparing to put work onto a flash drive to take home.

He started picking up random items from my drafting table: a soft eraser, a drafting pencil, a ruler. It was like he’d already forgotten why he’d wandered over.

I tried to help him out. “Did you have more thoughts about the Rockland mall project? I thought Fernando covered the specs pretty thoroughly, but—”

Rudy put the ruler down and blurted, “Would you go out with me?”

I blinked at him. Dumbfounded, though logically I shouldn’t have been.

His mouth curved into a winning smile as he recovered his poise. “So? What do you think? Dinner in the East Village, a movie after? I know you don’t have plans tonight.” He gestured toward my leather bag, the flash drive in my hand.

Rudy was a handsome man. Smart too. He wore great sweaters and had the best shoes. His hair had blond streaks from summer sports and winters spent skiing. And he’d been known to quote Yeats at staff meetings. He’d be easy to hang out with.

Panic rose in my chest, making it hard to breathe. “No. I can’t.”

He looked disconcerted. “How about next week? I can get last-minute tickets to
Book of Mormon
. Great seats too. I have a friend on the show.”

To avoid his gaze, I fit the flash drive into the port and started copying files. “No. Stop asking. Please. I’m not going to date you.”

His forehead wrinkled; his mouth twisted. “Wow, I knew you had a rep for bluntness, but come on. I thought we liked each other.”

His forehead uncreased. “Then why?”

“Never.” You couldn’t shut men off with a flick of a switch after your orgasm. And when they told you they loved you, God help you if you didn’t say you loved them back.

“I’m not relationship material.” I put up my hand to forestall the retort I could see coming. “And I don’t do one-night stands. It’s too messy. Doubly so since we work together.”

“Your loss, babe.” He winked at me. At least his pride was intact.

Things got strange when I arrived home. The living room was dead quiet, for one thing. No roommate dancing around in her underwear or doing calisthenics while cursing at the perky on-screen instructor.

I set my briefcase down. “Jeanine! Are you home?”

I went into her bedroom to find her bundled under the comforter, an empty soup bowl on her nightstand, and, oddly, her work gear spread out on the bottom of the bed: a cock ring, fur-lined handcuffs, a blindfold…

“I’m sick.” She sounded pathetic, her voice a weak thread.

“And you thought a little sex action would help you feel better? Sorry, I don’t swing that way.”

“I have a new client tonight.” It was nearly a wail.

“I hate to break it to you, but you’re going to have to cancel.” Jeanine was a high-priced call girl. At first, she worked through an escort service, but these days she got clients by referral only. She claimed the job was a lot like being a therapist: she made the guys feel good, and in the intimacy of the bedroom, they worked through a lot of their emotional hang-ups. She called it cathartic. Mostly, though, it was paying her way through grad school. Naturally enough, she was studying to be a psychologist.

“He’s going out of town next week. Besides, you know what happens if you cancel the first time. It’s over. And this guy…”

She got up, trailing the comforter, and went to her desk. “Look at him.”

A few clicks on the keyboard later, a screen came up. A business site, with an executive profile. The photo showed him sitting behind a desk.

I gaped. “That’s him?” Chiseled jawline, cheekbones to die for, thick, luxurious hair. His mouth was generous but tight, like he kept secrets he never shared. A touch of mystery, a hint of distance. And his suit jacket hung so well, it was obvious he was fit under those clothes.

“Why is he paying for sex? He could walk into a bar anywhere in the city and get ten women to follow him home. Like the Pied Piper of one-night stands.”

“You’d be surprised at the men who pay for it. Sometimes they just want to be able to walk away after sex. Like you.” She flashed me a smile. “It’s less complicated when it’s an up-front monetary transaction. Nobody’s feelings get hurt. And Dylan sounded pretty intense. He’s got baggage, clearly. Again, like you.”

I ignored this last bit. No point in responding. Jeanine always claimed I should see a therapist about my relationship problem. I always told her I was fine the way I was, and my parents’ deaths had nothing to do with who I was now, so why dig it up all over again? “You’ve talked to this Dylan?”

“Just email.” She flopped back onto the bed, moving the handcuffs out of the way. “Too bad I don’t have someone who could take my place. Unless…” She looked up at me from under long eyelashes. Coquettish.

I stared at her, dumbfounded. Me. In Jeanine’s place. As a call girl.

She propped herself up on her elbows. “Oh my God, why didn’t I think of it sooner? It’s perfect.”

Her words caught at me, painful and true. Sex was being held, was spiraling into sensation. Sex was connection with another person, however dubious, however deceptive. Sex with an active, live partner was a whole lot better than a mechanical device. “Yes, but…”

“And yet you never go for it because it means being vulnerable to another human being, and you’ve never been comfortable with that. That’s why your college relationships went belly-up.”

“Sorry, you know I love you, but it’s true. But this time? You wouldn’t even be you. You’d be me. Besides, Dylan isn’t expecting a relationship. Just sex.” She grinned, triumphant. “Perfect, like I said.”

“As a call girl, though? It’s not me. I’m not like you.” A frisson of excitement shot through me, making my toes curl, belying my words.

“I’m sure you meant that as a compliment.” She gave me a reproving look.

“Actually, yes. You’ve got balls. You get out there and take risks. I—” I gestured toward the door, where I’d left my leather bag from work. “I stay in and get work done. Which is fine. I love my job. But I’m not about to go and—”

“Why not? Do you find him unattractive?”

I hesitated. Unattractive? He was gorgeous. His chiseled looks, the intensity in his gaze… Yeah. I wanted to meet the man. But have sex with him? Well, yes, if I was honest with myself, that sounded amazing. Deliberate, planned-in-advance sex, though? Tonight?

Jeanine snorted. “Come on, Samantha, go for it for once in your life. He’s a solid guy. Safe. One of my favorite clients referred him. I checked him out thoroughly, like always, but I’ll give you a can of mace anyway.”

She laughed. “I’ve seen you dance. You’re the most sensual person I know, once you let yourself go. Trust your body. He’ll love you.”

“What if I didn’t, you know…?” I gestured toward my crotch.

She rummaged in her bag and tossed me a tiny tube of lube. “You won’t need it. You’ll be sexed up and ready for action. Trust me. This guy is totally your type, and best of all, you get to walk away at the end of the night. He won’t even have your phone number. You’ll love it.”

I held the lube between my fingers. The little tube made it feel so much more real. “I’m not you. Just because I worked at Greenpoint Pleasures for a few years doesn’t mean I’m uninhibited and sex positive like you.” Jeanine had helped me get the job at the feminist sex shop during college. It was the warmest, most wonderful workplace I’d ever had. Plus, I now had the world’s biggest collection of dildos, thanks to my employee discount. “Anyway, I have piles of work to do, and you’re talking about something that’s happening tonight, no time to think it over.” I set the lube down on the bed. It was almost invisible among the other sex toys. “I’m sorry. I wish I could help you.” I could hear the quaver in my voice. The frisson of temptation.

Jeanine could too, apparently. “Are you sure?”

“I’m going to order from Szechuan Palace and get to work. Want anything?” I could feel the pulse beating in my throat, double-time. Me? Doing that? With him? Impossible. And yet…

I left Jeanine’s room and went to get the takeout menu. Not that I needed it. I had the restaurant on speed dial, and the guy on the phone recognized my phone number from the caller ID. “Ms. Lilly, right? Chicken with broccoli and mu shu pork, same as usual?”

“Yes, that would be good. And a hot-and-sour soup. My roommate’s got the flu.”

“I hope she feels better soon. What show are you watching tonight?” Behind him, I heard the clatter of plates and a shout of laughter. People out on a Friday night, having a good time.

“I was thinking of mixing it up. Maybe watch a romantic comedy.”

“Good to break up the routine. Your order will be there in forty-five minutes. Talk to you soon.”

I returned the menu to the drawer, next to the pile of duck sauce packets and cheap wood chopsticks still sealed in their paper sheaths.

I’d sealed myself in a cocoon. Work, home, the occasional poker party with my old friends from Greenpoint Pleasures. All women. All safe. What was I so afraid of?

When I went into her room, Jeanine was reading a book under the comforter. On her desk, the computer was still on the same page. Dylan the hot executive. Maybe it was my imagination, but he looked hungry, in a good way. I pictured that gaze trained on me. I shivered with the feeling it engendered.

Maybe I could do this after all. I wouldn’t know if I didn’t try. Mixing it up for real.

Jeanine glanced up from her book. “What’s up?”

“How would this work? If I said yes?”

Two hours later, I strutted into the lobby of a Beaux Arts apartment building on the tony Upper West Side, clad in high-heeled boots and a whole pile of paper-thin courage.

House of Mirrors by Bonnie Dee and Summer Devon
Whirlwind by Nancy Martin
Name & Address Withheld by Jane Sigaloff
After the Rain by Leah Atwood
Aurora 03 - Three Bedrooms, One Corpse by Charlaine Harris
Hamlet by William Shakespeare
The Storyspinner by Becky Wallace
The Secret of the Lonely Isles by Joanne Van Os
The Knight at Dawn by Mary Pope Osborne
Pines by Crouch, Blake