Read By the Rivers of Brooklyn Online

By the Rivers of Brooklyn 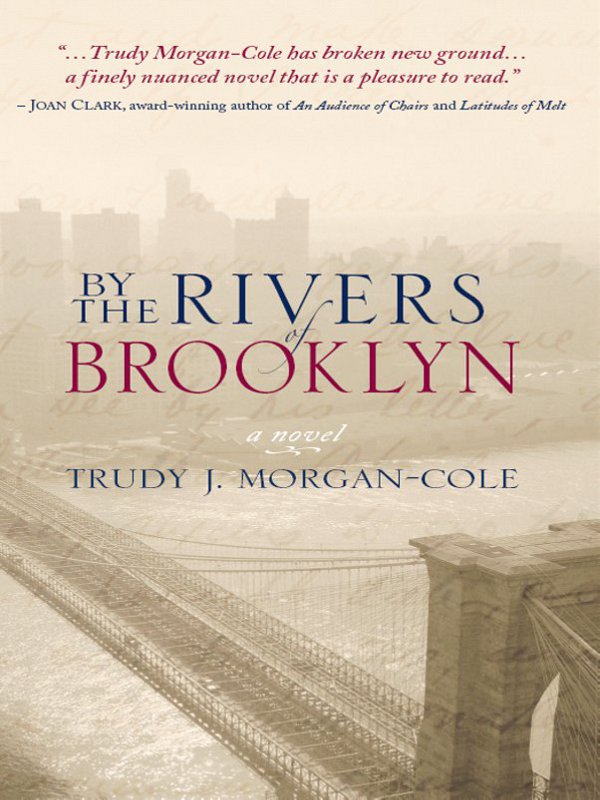 BY THE RIVERS
of
BROOKLYN

BY THE RIVERS
of
BROOKLYN

A
LL
R
IGHTS
R
ESERVED
. No part of this publication may be reproduced, stored in a retrieval system or transmitted, in any form or by any means, without the prior written consent of the publisher or a licence from The Canadian Copyright Licensing Agency (Access Copyright). For an Access Copyright licence, visit
www.accesscopyright.ca
or call toll free to 1-800-893-5777.

T
HERE'S A LITERARY CONVENTION
, which I assume has something to do with laws and liability, in which authors place a disclaimer at the front of a book: “This is a work of fiction. Any resemblance to any persons, living or dead, is purely coincidental.” Balancing this is another literary convention which claims that all writers mine their own lives for material.

This novel began with an idea about two sisters whose background and early lives were very similar to those of my grandmother and my great-aunt. I started writing them: they moved out of the shadows of memory and took on their own fictional existence. Joined by a sister-in-law who was not very much like any of my great-uncles' wives, these women went on to make choices and have adventures that carried them far from the paths any of my foremothers had travelled.

This book, finally, is pure fiction, and its story includes things that really happened in my family and in other people's families and a few things that may never have happened in any family. It is a patchwork of memory, lies and dreams, in which a reader who knows me will occasionally be surprised to see a small square of fabric lifted from a dress she once wore, stitched into an unfamiliar pattern.

I'm grateful for these patchwork squares, for the memories of my parents, my grandparents, my aunts and uncles, for the stories of those who went away and those who stayed home. Despite my love for the men in my life â father, husband and son â it is really a story inspired by, and for, the web of women. So this story is dedicated, with particular love:

To the memory of Florence Ellis,
and to
Gertrude Charlotte Ellis,
Joan Gertrude (Ellis) Morgan,
and Emma Charlotte Cole.

By the rivers of Babylon, there we sat down,
yea, we wept, when we remembered Zion.

We hanged our harps upon the willows in the midst thereof.

For there they that carried us away captive required
of us a song; and they that wasted us required of us mirth,
saying, Sing us one of the songs of Zion.

How shall we sing the Lord's song in a strange land?

PROLOGUE: 1976 ITEMS NOT FOUND IN A TRUNK IN ANNE PARSONS' ATTIC

ITEMS NOT FOUND IN A TRUNK IN ANNE PARSONS' ATTIC

T
HE
Y
EAR
A
NNE WAS
eleven, she started looking for a trunk in the attic. Her first glance into the attic made it clear that the trunk could not literally be up there. Every attic she has ever read about has been a cool, gloomy room reached by climbing a ladder at the top of the house, a room filled with old trunks and boxes which, in their turn, are filled with old dress-up clothes, old letters, old diaries. Children in books while away long rainy afternoons opening these trunks and sorting through their contents, losing themselves in past lives, discovering dark or beautiful secrets about their parents and grandparents.

The hatch to the attic is actually in the ceiling of Anne's closet, although no-one ever goes up there except, very rarely, her father, and he never seems happy about it. One day she drags her desk chair into the closet, piles large books on it, and stands atop the teetering pile, pushing and grunting until she heaves the attic hatch open a few inches. Anne pokes her head into a scratchy sea of pink fibreglass insulation, which continues unbroken to the rafters, only inches away. She quickly pulls her head out and closes the hatch, and sneezes for the rest of the afternoon.

But if The Trunk is not in the attic, this does not mean it doesn't exist. Somewhere â in the basement of her parents' house, in Aunt Annie's house, which is much older than theirs, in some forgotten closet or corner, The Trunk must lie. Someone, among all her armies of ancestors, someone must have kept letters, written in a diary, preserved old ball gowns and the ghostly pressed roses that accompanied them.

Her search for The Trunk is similar to the search she conducted when she was eight or nine, for Secret Passages. Every book she read that year involved houses with secret passages linking the fireplace to the basement, or the bedroom to the attic, or, best of all, linking some ordinary room like the kitchen to a secret room high in a tower whose existence you had never suspected. For months Anne went around her house and Aunt Annie's, tugging at bookcases, pressing the stones in the fireplace, lifting rugs â looking for the carefully hidden signs of a secret door. None appeared. When she finally mentioned her quest to her father, he told her that such passages existed, but only in houses much older than theirs or Aunt Annie's â houses over a hundred years old, maybe. When Anne asked if anyone they knew lived in a house that old, her father said no.