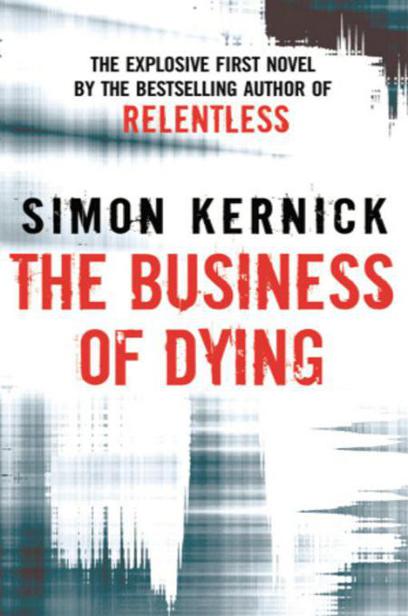 The Business
of Dying

Part One: Introducing the Dead

Part Four: The Business of Dying

A Good Day to Die

Simon Kernick has asserted his right under the Copyright, Designs and Patents Act 1988 to be identified as the author of this work.

This book is a work of fiction and, except in the case of historical fact, any resemblance to actual persons, living or dead, is purely coincidental.

This book is sold subject to the condition that it shall not, by way of trade or otherwise, be lent, resold, hired out, or otherwise circulated without the publisher's prior consent in any form of binding or cover other than that in which it is published and without a similar condition, including this condition, being imposed on the subsequent purchaser.

The Random House Group Limited supports The Forest Stewardship Council (FSC), the leading international forest certification organisation. All our titles that are printed on Greenpeace approved FSC certified paper carry the FSC logo. Our paper procurement policy can be found at
www.rbooks.co.uk/environment

Simon Kernick lives near London and has two young children. His novels,
The Business of Dying, The Murder Exchange, The Crime Trade, A Good Day to Die, Relentless
(selected as a Richard & Judy Summer Read) and
Severed
are available as Corgi paperbacks. His new novel,
Deadline,
will be published in July 2008.

The research for Simon Kernick's novels is what makes them so authentic. His extensive list of contacts in the police force has been built up over more than a decade. It includes long serving officers in Special Branch, the National Crime Squad (now SOCA), and the Anti-Terrorist Branch, all of whom have plenty of tales to tell.

For more information on Simon Kernick and his books, see his website at www.simonkernick.com

THE BUSINESS OF DYING

THE MURDER EXCHANGE
Ex-soldier Max Iversson is hired to provide security for a meeting that goes disastrously wrong.

'From hardboiled cops to ruthless women on the make, Kernick generates a potent cocktail of thrills'
Guardian

THE CRIME TRADE
DI John Gallan and DS Tina Boyd uncover a murderous conspiracy that will take them to the heart of London's most notorious criminal gang.

A GOOD DAY TO DIE
Exiled cop Dennis Milne returns to London to hunt down the murderers of a close friend.

RELENTLESS
Tom Meron finds himself on the run, pursued by enemies he never knew he had ...

'This is the sort of book that forces you to read so fast you stumble over the words. Phenomenal!'
Evening Standard

SEVERED
You wake up in a strange room on a bed covered in blood. And you have no idea how you got there ...

'If you like lots of non-stop action, this is for you'
Guardian

Thanks to all those who helped in both the writing and the publication of this book.

You know who you are.

Years ago, long before I was first published, I wrote a gangland thriller. Put bluntly, the damn thing was terrible, so it wasn't any great surprise that no one touched it. However, it contained one scene I always liked. In it, a hitman and his driver ruminate on the injustices of the world while waiting in a dingy motel car park for their three targets to arrive. The killings are carried out clinically and effectively and only later, when their car is stopped at a police roadblock, do we find out that the hitman is in fact a serving police officer.

The idea for a cop as a hitman was an unusual one, but not entirely in the realms of fantasy. I'd been introduced to a number of serving police officers in the Met who were friends of friends, and one thing that struck me in my conversations with them was the extent of their disillusionment with the job, and their feeling that they were fighting a losing battle
with the people they were meant to catch. One even told me over a beer one night that it had crossed his mind more than once that if you couldn't beat them, you might as well join them. I don't see that guy any more so don't know whether he ever did or not (although I like to think he didn't), but it struck me that it wasn't such a huge leap from disillusionment to corruption, and that once a man was corrupted, his journey became a downward spiral in which anything became possible.
Even murder.

A
long time afterwards, I was looking at that old motel hit scene again, and the germ of a new story began forming: one which featured a cop who was a killer, but who remained haunted by the decisions he'd made. He would be a man of contradictions, on the one hand a cynic who no longer believed in the law he was upholding, but who also had a deep-seated, almost desperate, desire for justice. Who was sickened by the way the criminals were winning the war on the streets, but who was unable to truly appreciate that, in the end, he was a criminal himself.

And so my anti-hero, Dennis Milne, was born, and in
The Business of Dying,
a fast-moving tale of murder and redemption, where Dennis is both the hunter and the hunted, his two diametrically opposing worlds collide, with dramatic and ultimately terrifying results.

Will he survive? Does he even deserve to?

Read on, and I think you'll want to find out.

Part One
INTRODUCING THE DEAD
1

There's a true story that goes like this. A few years back a thirty-two-year-old man abducted a ten-year-old girl from the street near her house. He took her back to his dingy bedsit, tied her to a bed, and subjected her to a brutal hour-long sex ordeal. It might have been a lot worse but the walls were paper thin and one of the neighbours heard the screams. She phoned the police and they came and knocked the door down. The girl was rescued, although apparently she still bears the scars, and the perpetrator was arrested. Seven months later he goes on trial and his lawyer gets him off on a technicality. Apparently she takes the legal view that it's better that ten guilty men go free than one innocent one's imprisoned. He returns to the area where he committed the crime and lives the life of a free man. The lawyer gets her money, courtesy of the taxpayer, as well as the congratulations of her
partners on a worthy performance. They probably even take her out for a celebration drink. Meanwhile, every parent in a two-mile radius of this guy is living in fear. The police try to defuse the situation by saying they'll keep a good watch on him, but admit there's nothing else they can do. As always, they appeal for calm.

Three months later, the girl's dad gets caught pouring petrol through the guy's letterbox. The police, for once, have been true to their word and are actually watching the place. He's arrested, charged with arson and attempted murder, and remanded in custody. The local newspaper sets up a campaign to free him and starts a petition that gets something like twenty thousand signatures. Predictably the powers-that-be ignore it, interest fades, and then, before his case comes to trial, the dad hangs himself in his cell. Is this the tale of a progressive, forward-looking society, or one that's about to go down the pan? You tell me.

But the moral of the story, that's easier. If you're going to kill someone, plan it.