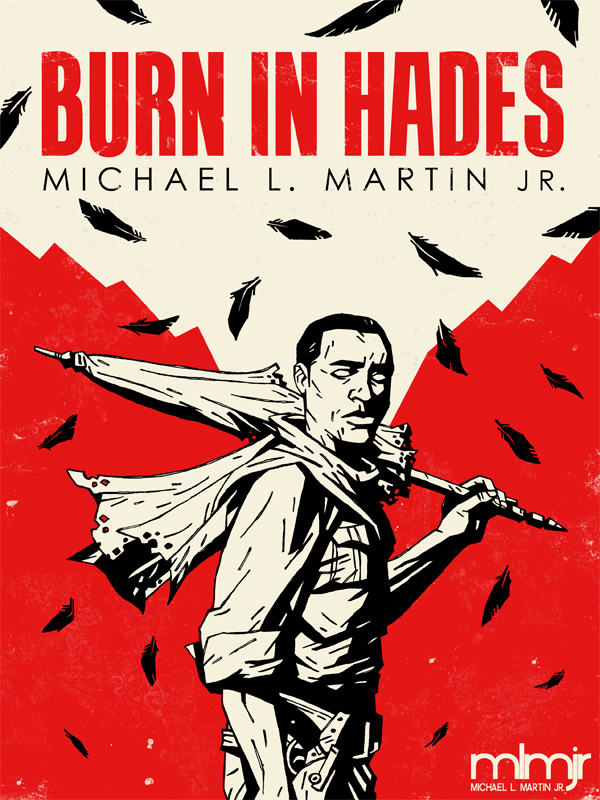 This novel is a work of fiction. Names, characters, places and incidents are products of the author’s imagination or are used fictitiously. All characters are fictional, and any similarity to actual persons living or dead, organizations, and/or events is purely coincidental. 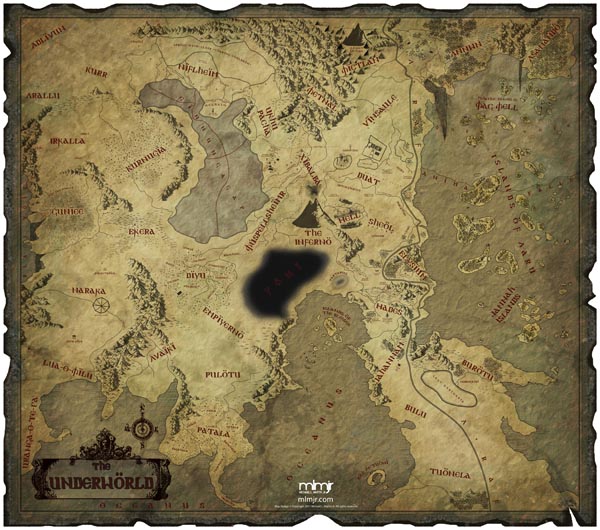 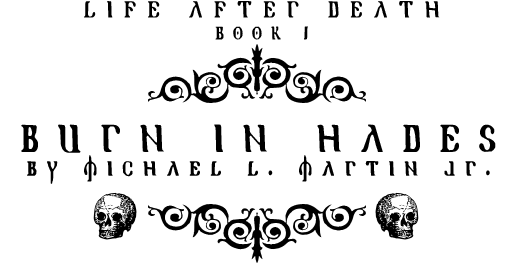 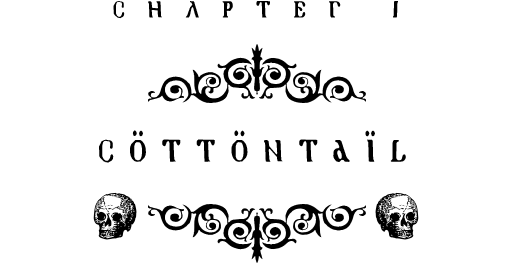 Rest in peace, my ass.

Cross squinted up at the bright flame-filled sky and aimed his arrow straight up at the giant bird. At that height it appeared only slightly bigger than the head of his arrow, but most adult barbots were at least the size of a stallion. He could taste the juicy meat already.

He cocked the bowstring back and kept an eye fixed on the featherless bird as it soared peacefully through the red flames that swirled about in every inch of the sky, licking downward like a serpents tongue. The exploding bursts of heat that boomed out of the sky would have scorched any other spirit, but not barbots.

The bowstring snapped, lashing his forearm and neck.

“Dammit!” He slammed the bow to the balcony floor and crushed it under his boot. “Worthless piece of—”

The giant bird spiraled down out of the fiery sky like a comet. It slammed into the black garden with a ruckus, colliding with tree branches in a crackling thud and vanished inside the thick brush.

Cross hadn’t shot it down though. His arrow lay impotently on the grimy balcony floor of the ruined temple. Either he was lucky that the bird had fallen or there was something more sinister afoot. Given all his knowledge of the underworld, it was most likely the latter.

He refused to enter the haunted garden to retrieve his quarry and headed back into the dark temple of skulls to wait for another barbot to fly over. But how the hell would he bring the next one down with a broken bow?

A terrible cramp stabbed through his belly like a butcher was gutting him with an icy hook. The pain brought him to knees. His hands slapped the soiled stone.

He clasped his hands together and drove his fists into his stomach. The blow snatched the air from his lungs, and the mysterious vermin swimming around in his stomach finally quit squirming, but they were still hungry.

“Hobble your lip you stinkin’ varmints,” he said. “I’ll go get the damn bird.”

His condition wasn’t nearly the same thing as being pregnant, but still, to have something living inside his stomach gave him a new respect for the wife he once had. Before the memories could penetrate his train of thought, he hummed one his favorite old spiritual songs: “Ride up in the Chariot”. The lyrics alone gave him a little boost in his soul, and concentrating on the melody kept his mind away from the disturbing memories of his child, whom he never had a chance to meet.

He pulled himself from the floor, grabbed his obsidian blade, and exited the temple down the stony staircase. The temple acted as a divider between the ball court and the wretched garden he’d planned on never entering again, mostly to avoid the little girl that lived in there. He faced the webs of fragile weeds, each primed to topple. He hesitated, clutched the grip of his blade and proceeded up the stone ramp into the garden to fetch his meal.

The only good thing about the garden of One Death and Seven Death was its temperature. The cool shadows provided a rare and refreshing chill, a much welcome respite from the barrage of heat from the flaming sky. Dead weeds in the garden grew three times as tall as Cross stood. None of them were green. They were all pale or dark, and they grouped together like an angry mob surrounding a runaway slave. Scraggly vines ensnared headless statues of the deities who had once owned the garden, and they blocked most of the torturing heat from the sky, encasing everything in a nice canvass of shade.

With his obsidian blade, Cross hacked away at every brittle weed that barricaded the garden. As his shoulder brushed the lifeless foliage, they flaked to the ground like snow, and leaves of mush and slime squished under his boots.

Spirits wept in the shadows, but he couldn’t see them. The deeper he trudged into the garden, the louder their cries grew, as if the Great Goddess would hear them, feel sorry for them, and rescue them from their lament.

Cross knew better. Magna Mater only helped those who helped themselves. Moping around and crying never solved any problems. He stopped near a putrid pond of poisonous water that some God must’ve spent time soaking in at one time. A stone head of one of their decapitated statues lay next to the pond staring up with an asshole grin.

Cross picked up the head. “I’ll give you something to cry about.” He tossed the head into the darkness at the spirits.

Instantly, the stone head shot back out of the blackness.

Cross was lying on the ground with a throbbing head before he could even think about ducking. The stone had hit him right in the soft spot of his head. As he rubbed his forehead he caught a glimpse of his reflection in the murky pond water beside him. He cringed at the unsightly dark hole through his forehead and splashed his fist into the pond to disturb his reflection.

The little girl whom he had hoped to abandon now stood over him as if she had been there the whole time. She was a brand new soul, no more than a few weeks dead, so she didn’t look as sallow as he did. Neither of them knew exactly how long ago she had become a member of the damned, but she was about nine years old at the time of her death. She didn’t remember her exact age, but that’s how old she appeared to Cross.

He moved to pick himself up and wobbled backwards, still shaken from the blow to his head. She dropped to her knees. He turned his head away as she caressed his cheeks in her tiny hands.

“Let me take a look,” she said, tending to his injury as if she were a nurse or something in her past life. She cared too much.

He swatted her touch. “Ain’t the first time I butted heads with anyone.”

“That’s because you haven’t figured out what ‘heaping coals of fire’ really means.”

“What do you know? You’re just a snot-nosed little kid.”

She grabbed his arm and helped pull him from the ground. He did most of the heavy lifting. She was just a puny little girl with dark, bushy hair. That’s why he nicknamed her Cottontail.

“I know that the weepers don’t want you here,” said Cottontail. “They cry louder every time you’re around.”

Cross chuckled. “A realm where I’m not wanted? That’s a first.”

“I don’t want to be here either. I hate it here. The only one I can talk to is you and the skull with the funny name. It said you were leaving.”

The only reason the skull knew of Cross’s plan was because Cross couldn’t keep his big mouth shut.

“I told you to wait here until I got back and not to talk to anybody,” he said, wagging his finger at her nose. “That’s your problem. You don’t listen.”

She hammered a fist into his stomach. The blow came as a shock but didn’t hurt. He almost laughed out of gladness that he had finally gotten her to express some toughness that she would desperately need in the future.

“You were never gonna come back,” she said.

“To get your stupid barbot. You didn’t come back for me.” She turned away from him and stared down at the pond. “But I forgive you. If I were you, I’d leave me too.”

“I was gonna share the barbot with you before I left,” he said, which was partially a lie. He was really going to leave her portion of the food behind before he ditched her. “It should be around this dump somewhere.” He peered deep into the shadows. “You seen it?”

“I thought you said you forgave me,” he said.

“That doesn’t mean I want you to leave.”

“Well, I guess the ants are gonna get it now. And I was gonna let you have your favorite piece this time. Too bad. I know you’re hungry. You haven’t eaten since the last time we ate together yesterday.”

Her child-sized stomach gave a wimpy gurgle. She pointed the way to the bird without relaxing her cute little scowl that always chipped away at his solid heart. He followed her direction deeper into the garden and into louder cries from the weepers. Cottontail’s footsteps squashed through the mush beside him.

He found the barbot wrapped up in vines, but it wasn’t dead like he’d hoped; its wing appeared to be its only injury. It lay curled up in that fetal position that everyone resorts to when suffering immense pain. Its beady, dark red eyes were scanning its surroundings. It might’ve seen them coming before they saw it.