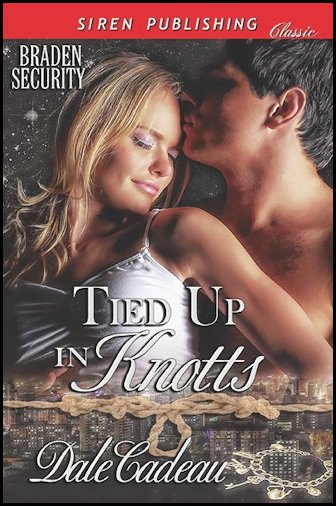 Tied up in Knotts

Ten years ago, James Braden was the leader of an elite covert unit of men that was involuntarily discharged from the army after receiving faulty intelligence. At loose ends, the men pool their resources and start Braden Security.

James Braden is hired to get close to Avery Knotts. She is the only clue to $2 million worth of missing drugs. A known drug lord wants them back, the Feds want them off the streets. At first glance, James knows in his gut she is innocent and decides to claim her as his own. While keeping her out of danger and staying one step ahead of the drug lord’s henchmen, James becomes too intimately involved with Avery.

The other members of the firm step in to keep him on the straight and narrow as they try to ferret out the information. A charm bracelet gives them their first clue.

Can James protect and keep her safe from everyone, even himself?

ABOUT THE E-BOOK YOU HAVE PURCHASED:
Your non-refundable purchase of this e-book allows you to only ONE LEGAL copy for your own personal reading on your own personal computer or device.
You do not have resell or distribution rights without the prior written permission of both the publisher and the copyright owner of this book.
This book cannot be copied in any format, sold, or otherwise transferred from your computer to another through upload to a file sharing peer to peer program, for free or for a fee, or as a prize in any contest. Such action is illegal and in violation of the U.S. Copyright Law. Distribution of this e-book, in whole or in part, online, offline, in print or in any way or any other method currently known or yet to be invented, is forbidden. If you do not want this book anymore, you must delete it from your computer.

WARNING: The unauthorized reproduction or distribution of this copyrighted work is illegal. Criminal copyright infringement, including infringement without monetary gain, is investigated by the FBI and is punishable by up to 5 years in federal prison and a fine of $250,000.

All art and logo copyright © 2014 by Siren Publishing, Inc.

If you have purchased this copy of
Tied Up in Knotts
by Dale Cadeau from BookStrand.com or its official distributors, thank you. Also, thank you for not sharing your copy of this book.

This is Dale Cadeau’s livelihood. It’s fair and simple. Please respect Ms. Cadeau’s right to earn a living from her work.

To my mother, who always said there was nothing better than a good book. To my daughter Keri, who one day said she was writing a book and I thought what a great idea. And finally to my husband for listening to all the different plots in my head and saying the book sounded like something he would read (also his spelling expertise was greatly appreciated).

Avery slid the top of her raincoat protectively over her head. She was glad she’d worn it this morning, when it had been sprinkling lightly. She knew she was being childish thinking the hood could hide her in the same way ducking under the covers reassured her when she was young, but it did. Too bad it didn’t take away her feeling of being watched. Avery was surrounded by empty shops and apartment buildings. Walking down this lane after work always gave her a creepy feeling, but tonight she could feel a difference. It didn’t make any sense. She had walked this route many times and always felt somewhat uneasy, but this was the first time she felt like she was being watched.

Rounding the last corner, she took a quick glance back and noticed a dark figure skirting between the town houses about a block down. That was enough for Avery. She ran the rest of the way to the front door of her apartment and in her haste, promptly dropped her keys. Picking them up with shaky hands, she finally opened the door and reached the safety of the front hallway. Pulling the top of her raincoat off, she breathed a sigh of relief. Telling herself that she was seeing things, Avery stood with unsteady legs and hurried up the stairs to her third floor apartment. Once inside, she leaned against the door and finally felt safe.

James stood leaning as far back as he could against the brick wall of the townhouse. Shit, she had seen him tonight. James had tried to keep his distance from Avery after spotting her at the diner where she worked. She seemed too naïve to be living and working in this area. Crime was high and drug deals were everyday occurrences.

Every protective instinct in James screamed out at him when he first saw her serving customers at the diner. Really, it was more of a leftover dive from the fifties with food than an actual diner. The only reason James was in the area was at the request of the Feds to find and get close to the woman he was now following.

How did a woman looking like her end up in a place like this, James wondered. He knew the Feds suspected her of keeping the last of the drugs her father had been selling, but seeing this area, James could not believe that. No one that had any money would knowingly move into this neighborhood. Detroit had been going downhill for a long time, but this area looked like all the rejects had decided to converge on this side of town. As it was, he had skirted a few drunks and prostitutes as he followed her home tonight. He had noticed that she kept a brisk pace and didn’t slow down until she reached the steps leading up to the apartment building. Her hurried walk told him she was nervous of this area and she wouldn’t have moved here willingly.

Slipping back into the alleyway, he watched her enter her apartment building. Knowing she was safe, James turned around and slowly made his way back to the diner, the one lighted building in the distance, surrounded by boarded-up derelict shops where he had parked his beat-up sedan. On his first trip down, he learned this wasn’t the area to bring anything of any value, like his Jag. He had suffered the loss of tires, radio, CDs, and everything else that was of any value. It had taken James a large bribe to even get a tow truck down to pick up his vehicle. A group of wayward youth watched him walk to his car. In the middle of town there was no hiding from the gang’s view.

Sliding into the old brown sedan, he contemplated the situation. The Feds wanted him to get close to her, but all he wanted to do was get her out of this neighborhood. He couldn’t keep coming every night to watch her walk home from work. That kept her safe, but didn’t solve the problem of getting to know her.

Avery wasn’t the stupid type and would soon realize that someone was following her. James really didn’t want a stalker charge attached to his name. He could just see it. James Braden, President and co-owner of one of the top security firms in the city, charged with stalking.

Tonight told him his mind wasn’t in the game. He was usually able to follow anyone and not get caught. If they found out, the team would have a great time razzing him and would never let him live it down. Starting the car, James put it into gear and started the long drive back to his office on the other side of town.

Avery finally got her shaky legs to hold her and she took off her raincoat and hung it on the hook on the back of the door. Walking over to the small kitchen, Avery grabbed a glass from the draining board and reached into the old beat-up fridge that came with the apartment. Pouring herself a large orange juice, she hoped it would help, since she didn’t keep anything stronger in the apartment.

Orange juice always reminded Avery of the summers when her family traveled to the cottage in Florida and sat on the beach. God, how she missed those times.

How could a year make such a difference? Avery had always assumed that her family would be there for her. How wrong had she been? One car accident down in Florida caused by a drunk driver had wiped out her entire family and her sense of security with it.

Summer on the Cape by J.M. Bronston
Stacked Up: Worth the Fight Series by Sidney Halston
A Crime in the Neighborhood by Suzanne Berne
Mittman, Stephanie by The Courtship
Finding Mary Jane by Amy Sparling
Thawing A Duke's Heart (Faces of Love Series #1) by Jessie Bennett
Brewer's Tale, The by Brooks, Karen
Blood Hina by Naomi Hirahara
The Zombie Chasers by John Kloepfer
Dying of the Light by Gillian Galbraith