Read Broken Forest: Book One of the Daath Chronicles Online

Broken Forest: Book One of the Daath Chronicles 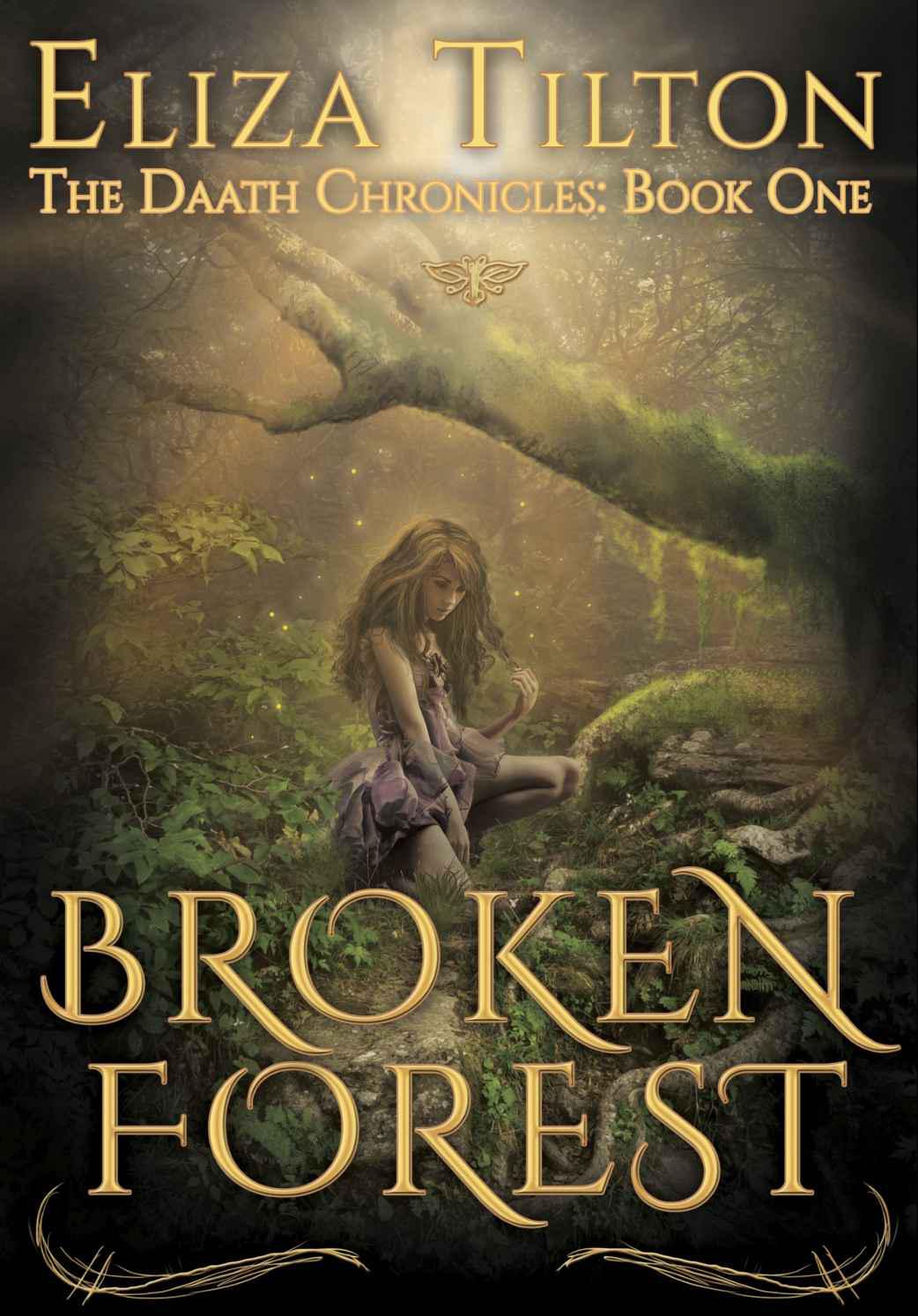 "The premise and story were incredibly unique, and I highly recommend this book to anyone who loves fantasy and romance."
~Jessa Russo, author of
Ever

I slid my feet into the hard leather boots, hating the feel of the rough material and what it stood for—I was a slave, or at least I felt like one. Trapped and overworked. The rooster crowed again, reminding me of the hour, but I didn’t care. Staring at the empty cot across from mine, I wondered if things would be different if my brother were still alive.

“Avikar,” my father said. “You get your hide outside before that blasted bird croaks again!”

Arguing with “the king of the farm” would only result in extra chores and no supper. I finished lacing my boots and strapped on my belt. The wooden floorboards creaked beneath me, billowing dust into my sisters’ room. I grabbed the small ladder and climbed out of my loft. In the common room, Mother kneaded dough while Calli ate at the table. After washing my hands in the bin, I slumped into the chair next to Calli and grabbed a bowl of rue.

“Where did Father go?” I said. Two empty seats surrounded the table. One for Father and one for Jimri.

“Poppa’s outside,” Calli replied in between bites. “You’re late, again.” She swung her legs back and forth underneath the table.

Mother poured me a cup of fresh milk. “You all right, honey?”

“Just tired,” I said, and dunked a piece of fanna into the clay bowl. The dense bread absorbed the onion-flavored liquid, and I shoved it in my mouth.

Disbelief filled my mother’s eyes. She always seemed to know when I was lying, but she nodded and left me alone.

Jeslyn walked in carrying two wicker baskets. She pouted at Calli. “Calli, you’re not dressed yet?” She fidgeted with her dress. “There’s too much to do today. I wanted to be gone already.”

Calli stuffed the rest of her food into her mouth and jumped off the chair.

“Don’t run while you’re eating!” Mother yelled after her, but Calli was already halfway to her room.

Jeslyn looked my way, her brows narrowing. For the fifth time she said, “Don’t forget, Avi, keep Derrick busy until supper. He doesn’t know about tonight.”

She and my best friend were courting.

I guzzled my milk and watched Mother scurry around the table wiping off crumbs. “Did you ask Father if I could quit early?” My father believed in a full day’s work. Anything less was unacceptable.

Mother collected the empty bowls. “Yes, you can leave after the stalls are clean.”

Only my perfect sister could get me out of my chores. Poppa’s little girl. I left the remainder of my bland food and hustled out the backdoor.

Jumper, my father’s right hand man, exited the outhouse. The old fellow wore a hat too big for his thin leathered face. “Morning,” I said.

“Morning, Avikar, Mr. Kingston will be here in an hour. We need that mare in the corral now.”

I pushed open the large barn door; stuffy heat slapped my cheeks. Twenty hungry horses filled those stalls, all of them waiting for me to feed them. One of the other farm hands had already taken the palomino mare out. I grabbed her reins and led her outside.

The horse would fetch Father a high price. Her silky mane glistened like liquid ivory, matching the stripe down her nose. Standing at nearly seventeen hands—and a solid eleven hundred stones—she was a beauty and one of our best.

The horse neighed, and I rubbed her side. “Pretty soon you’ll be making some folks a lot of coin.”

She snorted in reply.

“I know. Running in a race isn’t the same as running free.”

Father and Jumper stood on the outside of the corral. I guided the mare through the gate and closed the latch behind her. She trotted around the enclosed circle, and I stepped onto the bottom rung of the wooden fence to get a better view.

A sharp whistle caught my attention. Father, wearing his usual scowl, pointed at the stables.

“Yeah, I’m going.” As I contemplated letting the pigs out in Mother’s garden, I thought about one thing.

One day, I’d leave and never look back.

The suns blazed, engulfing me in heat. I threw the rake on the ground, wiped the sweat off my brow, and pushed the hair off of my face. My hair always bothered me while I worked, and on the really hot days, I thought of cutting it all off. I’d never do that, though. The village girls had a thing for my auburn hair. They said the color made my pale-green eyes stand out, giving them a haunting effect.

In front of me lay rows of round flat heat-dried dung. I’d become so used to the biting smell it only partially stung my nose. A haze from the cakes hovered above the ground. At this time of day, the suns were directly overhead. Watching. The two giant eyes of The Creator.

Stretching, I flexed my sore muscles, examining the definition in my arms. I’d gotten bigger in the past year. The one good thing about working on the farm.

I wanted to see if Mr. Kingston bought that mare, but stopping to ask would only aggravate Father, and I was already on his bad side. He said I had a lazy attitude. I didn’t. I just never pictured living out my days raking manure. This isn’t what I wanted, but what I wanted had died with Jimri.

With my chores finally finished, I headed down the dirt road that would take me into the village. Scattered clouds dotted the sky, and a cool wind passed through the trees. I whistled while I walked, enjoying the fresh air. The village was almost half a day’s journey from home, but on days like this, I didn’t mind the long walk.

Flanking the road were tall oak trees, budding with leaves. Their limbs reaching high into the sky. I gazed up at them. Lakewood was known for its green hues and ancient oaks. Even though we lived inland, streams from the Great River passed through here and intertwined with Middle Lake, the largest lake in Tarrtainya. I wondered what the other eleven lands looked like and if they were all full Lakewood’s richness.

It was late-afternoon when I arrived in the village. Without the shade of the trees, the suns heated the air. We were a small community, but close. Thatched cottages wove in between storehouses, the wooden church, and small school house. Far in the distance, I could see the grey stones of Lord Tyre’s castle. We were lucky to have a lord as kind as he. Again I told myself I ought to be thankful for where I was, but I couldn’t. Not any longer.

I reached the Blacksmith’s shop and peered into the shop’s soot-filled windows, but only saw Derrick’s father speaking with a customer. Strolling around back, I found Derrick banging a piece of metal.

“You ready to go fishing?” I said. The thought of going to the river, standing knee high in cool water, was just what I needed.

Derrick slammed his hammer three more times before leaning it against the bench. “No fishing.”

Derrick turned around, smirking. I knew that look. He was up to something.

As long as I kept him busy until supper, it didn’t matter what we did. “All right, let’s go.”

Derrick had me so preoccupied with his story of Marsha Long getting caught in her parents’ barn with Philip Baker that I didn’t pay attention to where we were walking. Grazing cows nibbled at grass next to a winding freshwater stream. Large hay bales dotted the open land. In the distance, a silo towered over the surrounding trees. We were by the Wilke’s farm—and just beyond that, the lake—the last place I’d seen my baby brother.

How I Became a Famous Novelist by Steve Hely
Romeo is Homeless by Julie Frayn
The First Confessor by Terry Goodkind
Vampirium by Joe Dever
Gabrielle: Bride of Vermont (American Mail-Order Bride 14) by Emily Claire
Happily Ever After by Tanya Anne Crosby
Marriage Under Suspicion by Sara Craven
The Favor by Hart, Megan
Orca by Steven Brust
Bug Out! Part 5: RV Flight from Terror by Robert Boren