Read Bring It On Online 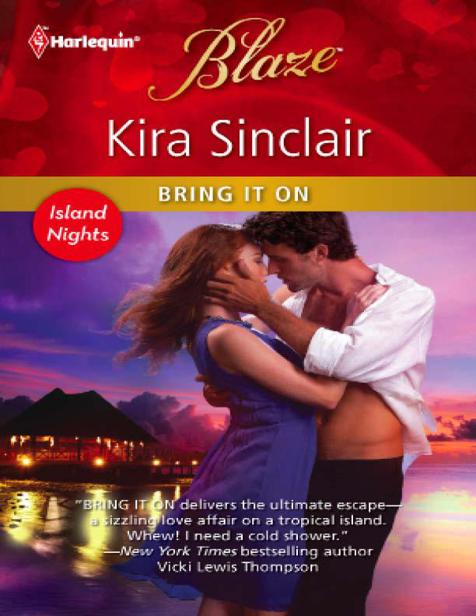 Breeze in to Escape, where every sense is seduced and every desire is fulfilled....

This adults-only Caribbean island resort may cater to your every need, but it’s also a business. And what could be better advertising than tantalizing photos of a real couple on their honeymoon?

Unless, of course, the couple is faking it....

Graphic designer Lena Fuller fled the chaos of her ruined wedding with her best friend, filmmaker Colt Douglas. But she wasn’t expecting the “honeymoon” her ex arranged would be a weeklong photo shoot. As the sets become more intimate, Lena and Colt find that their libidos are slipping deliciously out of control. Sure, they can fake it...but when the week is over, will they be able to forget it?

Colt ground his hips against her, making a ribbon of need wind slowly through her body.

“Oh, yeah.” She arched her back and pressed her breasts against the expanse of his chest.

She wanted to touch him, taste him.… And here was as good a place as any.

Reaching between them, she wiggled her hand down under the edge of his waistband.

“I was talking about building a fire,” Colt said, a grin playing at the corners of his mouth.

“Jerk,” she grumbled, suppressing her own smile.

She took a step away, but Colt pulled her back into his arms, stealing her breath with a kiss.

Maybe being lost wasn’t so bad after all….

I began brainstorming my Island Nights series in the middle of one of the coldest winters we’ve had in a long time. Let me tell you, slipping away to a romantic tropical island sure seemed like a wonderful idea! Writing these books allowed me that opportunity in my mind if not in real life.

I started wondering what kinds of people might visit a remote tropical resort. Honeymooners were an obvious choice, especially as I started fleshing out Escape’s unique history and business model. We’re talking about Blaze here, so of course Escape caters to adults looking for a bit of fantasy. But what if the fantasy fell apart, the wedding didn’t happen and the bride ended up on the island with her very hot—and very male—best friend....

Add a local legend about finding your heart’s desire—whether it’s what you were looking for or not—and you’ve got the recipe for some sexy, sultry beachside fun.

I had such a good time writing Lena and Colt’s story, and I hope you enjoy it as much as I did! I’d love to hear what you think. You can contact me at [email protected] or visit my website, www.KiraSinclair.com.

When not working as an office manager for a project management firm or juggling plot lines, Kira spends her time on a small farm in north Alabama with her wonderful husband, two amazing daughters and a menagerie of animals. It’s amazing to see how this self-proclaimed city girl has (or has not, depending on who you ask) adapted to country life. Kira enjoys hearing from her readers at her website, www.kirasinclair.com. Or stop by writingplayground.blogspot.com and join in the fight to stop the acquisition of an alpaca.

To get the inside scoop on Harlequin Blaze and its talented writers, be sure to check out blazeauthors.com.

All backlist available in ebook. Don’t miss any of our special offers. Write to us at the following address for information on our newest releases.

I want to dedicate this book to my wonderful editor, Laura Barth. Not only is she a joy to work with, but her strengths are a perfect balance for my weaknesses. She helps me write the best book possible. Laura, here’s definite proof that together we can figure anything out. Thank you!

“IF ANY MAN CAN SHOW just cause why this man and this woman should not be joined in holy matrimony, let him speak now or forever hold his peace.”

Lena Fuller’s stomach rolled as if she’d just gorged herself on junk food and then gotten on the worst roller coaster. Was it her imagination, or was every person inside the church holding their breath?

No, wait, that was just her.

But she wasn’t imagining that everyone was staring at her. Although she supposed wearing a wedding dress made that a given.

She looked across at the man she was marrying. Wyn Rand. Flawless features. Aristocratic D.C. family. Challenging job. Limitless future.

Wyn was the perfect man for her. Nothing like the men her mother had paraded through her childhood. He respected her and appreciated her intelligence. He didn’t treat her like a piece of meat, assuming the only thing she was good for was warming his bed.

All of her friends were jealous that she’d snagged such a wonderful man. So why were the butterflies threatening to break through her stomach in a replay of
Alien?

Her eyes drifted from Wyn with his pearly-white smile and confident gaze to the line of men standing diagonally behind him. Her gaze skipped purposely to Colt Douglas, one of her best friends.

He was three back in line, put there because she’d asked Wyn to include him in the wedding party. Wyn had never liked Colt, although Lena still didn’t understand why. But Wyn had reluctantly acquiesced because it had been so important to her. She wanted—needed—Colt standing beside her on this important day.

She wasn’t sure what she was looking for, maybe a smile of encouragement or a calm certainty she couldn’t seem to find inside herself. It definitely wasn’t the intense, laser-sharp stare Colt leveled at her. Nor the beginnings of a frown as the space between his brows wrinkled. Lena felt an answering pucker pull at her face.

No, wait, she should be smiling.

“I object.” The small voice behind her quivered, but everyone heard the words anyway.

And suddenly Lena could breathe again.

Wyn’s shocked gaze morphed into a glare that he directed somewhere over her shoulder. Something in the back of the church clattered loudly against the stone floor. The preacher sputtered, “Excuse me? I—I’ve never actually had anyone object.”

The preacher looked at her with a befuddled expression, as if she could tell him what to do next. As if this happened to her on a regular basis.

“I can’t let you do this, Lena. I’m in love with Wyn. We’ve been having an affair for the last two months.” Mitzi, her youngest aunt’s oldest daughter, raced from the line of bridesmaids to stand between her and Wyn.

Lena focused in on her cousin’s face. Peaches-and-cream beautiful, her eyes sparkling with the innocence of youth. An innocence she had no doubt this girl was about to lose. Wyn’s mother was not going to be happy, and the woman was connected enough to make Mitzi’s life hell. Lena tried to dredge up some sympathy for her but couldn’t.

She watched mutely as Wyn attempted to pull Mitzi out from between them, to make her disappear, as if he could make the problem go away.

He hadn’t even tried to deny it. And deep down, Lena wasn’t surprised. Wyn didn’t ask forgiveness of anyone…especially his future wife. Former future wife.

“I didn’t mean for it to happen, Lena, honest. I ran into him at a club one weekend. We had a few drinks. One thing led to another.”

Despite the shock and pressure suffusing her chest, Lena’s own temper began to break through. How could this all be happening? On her wedding day.

“If you tell me he slipped and his dick fell into your vagina I’m going to strangle you.”

A nervous titter went up from the congregation beside her. Lena shot the entire mob a glare. Several of them stirred, the century-old wooden pews creaking beneath the weight of their guilty consciences.

“Mitzi, shut up.” The first words Wyn bothered to speak and they were seriously less than helpful.

Around Lena chaos finally erupted. A cacophony of noise reached out to grab her. Pain burst through her chest when she looked into Wyn’s eyes and realized that it was true. Guests talked to, at and above each other, making it difficult to pick out single voices from the crowd.

Her mother’s high-pitched squeal, “I always said your daughter was a whore,” joined her aunt’s “At least she isn’t a stuck-up snob who thinks she’s better than everyone else.”

Lena cringed at her aunt’s words. She was not a snob. She just preferred not to associate with her mother’s family. Frankly, they were all cut from the same self-absorbed, overly emotional cloth and she just didn’t have the energy to deal with them. Putting up with her mother was draining enough.

Walkers by Graham Masterton
The Ranger by McCarty, Monica
Done Deal by Les Standiford
The Scottish Witch by Cathy Maxwell
Cherish by Catherine Anderson
Melissa Bourbon Ramirez - Lola Cruz 01 - Living the Vida Lola by Melissa Bourbon Ramirez
A Dream of Lights by Kerry Drewery
No Time Like the Present: A Novel by Gordimer, Nadine
Never Let Go by Deborah Smith
The Virgin Suicides by Jeffrey Eugenides