Read Brie Submits to her Master (After Graduation, #2) Online

Brie Submits to her Master (After Graduation, #2) 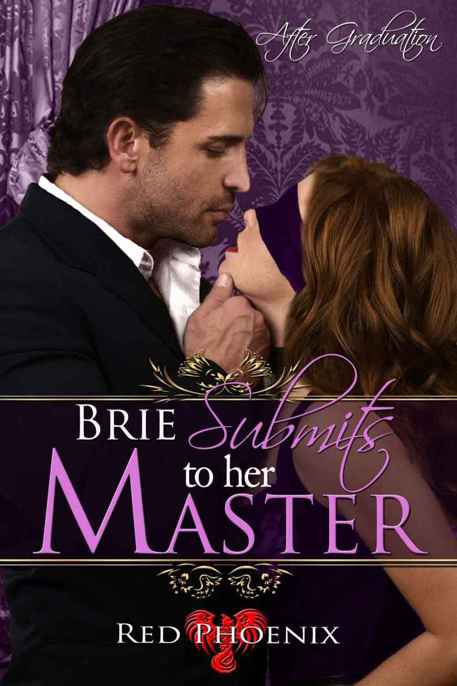 Brie Submits to her Master

Brie Submits to her Master

This eBook is licensed for your personal enjoyment only.

All rights reserved. Except as permitted under the U.S. Copyright Act of 1976, no part of this publication may be reproduced, distributed, or transmitted in any form or by any means, or stored in a database or retrieval system, without the prior written permission of the author.

This book is a work of fiction and any resemblance to persons, living or dead, or places, events or locales is purely coincidental.

Disclaimer: The material in this book is for mature audiences only and contains graphic sexual content. It is intended only for those ages 18 and older.

Lea and the Subs

About the Author
Red Phoenix

Brie stared at Sir as the first of the sun’s rays flooded through the window. His face took on an almost boyish quality while he slept. It was sexy and so incredibly sweet. She was tempted to gently caress his cheek, but Sir must have sensed her inclination because he opened his eyes.

She broke out into a shy smile. “Good morning, Master.”

“Waking up to your beautiful face has moved me.” He threw back the covers so she could admire his hard awakening. “Service me.”

Her smile grew wider as she crawled between Sir’s legs and took him into her mouth. Brie lavished her love with an eager tongue, swirling around his smooth head before sucking lightly to bring added pleasure. She moaned when he fisted her long hair and began guiding
her with his hand. Did Sir know it melted her insides when he did that?

“I love starting the morning with your pink lips wrapped around my cock.”

She looked up at Sir as she continued to suck his handsome manhood. He pushed her down deeper on his shaft and she gladly took its fullness, letting the head of his cock slip down her throat.

Her muffled moan expressed the pleasure she felt from being his. Sir was not rough, but always demanding. He had a way of using her for his own gratification, but making her feel completely cherished in the process.

Brie’s pussy pulsed of its own accord in response to his pleasure. When he released deep in her throat there was a significant exchange of power
: his male dominance over her, and her total submission to him—balance. It was the perfect way to start the day.

Afterwards, Brie laid her head on his thigh and looked up at him lovingly. Sir stroked her hair with a contented look on his face. “Tonight we shall visit the Center. I hope you are ready for what I have planned.”

Her loins contracted with a mixture of excitement and trepidation.

Brie spent the day at the tobacco shop showing the two newest employees the ropes. It looked like Mr. Reynolds had at least
one
good worker. The niece was a whiny little thing, complaining constantly and texting her friends instead of listening. Brie knew Laurel would be nothing but a pain for her soon-to-be ex-boss, a perfect replacement for Jeff. However, the nephew was acceptable. Mike was a quick study and showed respect towards Mr. Reynolds. Brie was tempted to tell Mr. Reynolds to fire the girl and only keep the boy, but her boss had no real control over the hiring at the shop.

When she
arrived home, she was surprised to find that her entire apartment had been moved into the spare bedroom and the large room was now completely stacked with boxes and cheap furniture. Upon entering Sir’s bedroom, she noticed her old uniform laid out on the bed. It was exactly the same: the dark brown miniskirt and leather corset, as well as the six-inch heels. However, the crotchless pantyhose had been replaced with lace garters and silk thigh-highs. The thong was noticeably missing.

She picked up the card that was lying on the bed and read his note:

Had your belongings
moved. We will discuss placement later.

Dress in your uniform and wait for me at the door.

Brie dutifully dressed, feeling nostalgic as she tightened the laces of the corset and slipped on the fuck-me heels. She took a quick peek at herself in the mirror before leaving the bedroom, looking herself over critically.

Would people confuse her for a trainee at the Center because of the outfit? She turned her head from side to side and twirled slowly, staring at her reflection. The garters and new hose were a sexy touch, giving her a more refined look. The collar certainly helped state her position, but she still felt very much like a trainee in the outfit. Was that Sir’s point?

She settled down before the door and waited for her Master to come. Exactly at six, she heard the key in the lock. He walked in and graced her with a pleased smile.
“Ah, my little student. Are you ready for class to begin?” He placed a hand on her head and commanded, “Stand and serve your Master.”

She stood before him as he held out his arm. She was mortified when her stomach growled as she was wrapping her arm around his. He looked down at her and smiled knowingly.

Brie felt the heat rise to her face. How unsexy to greet Sir with a growling stomach.

He made no mention of it, but when Sir got to the car he reached behind his seat and pulled an apple out of his briefcase. “I believe in the adage
, ‘An apple a day…’”

Brie took the apple and murmured, “Thank you, Sir.” She smiled to herself as she bit into the tart apple, grateful she had such a thoughtful Master.

He remained silent on the drive, leaving Brie free to conjure up all kinds of different scenarios Sir might try on her. He had specifically mentioned the night before that things were going to get rough. What did that mean? Was he going to test her pain tolerance? The thought of that was definitely
not
sexy, but she trusted him to bring her through it if that was his intent.

Perhaps he was going to punish her further for her deceit involving Faelan? Brie quickly dismissed that idea. She knew in her heart that Sir was a fair man. She had endured the punishment for her indiscretion and had received his complete forgiveness.

Brie licked the sweetness from her lips as they pulled into the Training Center parking lot. It was strange to be back, knowing she was no longer a student.

Although classes for the Submissive Training Center were on hiatus, the business college was still in full swing and the parking lot was full. Unlike before, Sir did not park in the spot reserved for the headmaster of
the Center. It remained empty, announcing the fact that a new one had not been appointed yet. It gave her a pang of guilt knowing Sir had stepped down from his position to become her Master. She wondered if he was feeling similar pains of regret.

“I will open the door for you, téa,” he stated. The use of her sub name let her know the protocol. She was to treat him as Master at the Center. No eye
contact with other dominants and no speaking unless spoken to by her Master.

As he helped her out of the car, he ran his hand down the length of her curves. Goosebumps followed. Such simple contact, but it instantly set her focus on him and reminded her of the power of his caress.

They walked into the school, arm in arm. The receptionist greeted him. “Good evening, Headm—I mean, Sir Davis. It is good to see you again.”

He continued to the elevator, putting his arm around Brie when a group of students walked past. Brie kept her eyes lowered, basking in his manly protection.

Sir took her down a wing of the school she had never been before. As she passed through the doorway, she read the word
Faculty Lounge
on the gold plate. The scent of rich tobacco filled the air along with the sound of many familiar voices.

“Couldn’t stay away
, I see,” Master Anderson said. He came over to Sir and slapped him on the back with the same casual familiarity the two had shared the first time she’d been introduced to him.

“I have no problem staying away, but damn if you people didn’t insist I come back.”

Master Coen’s voice rang out from the other side of the room. “I apologize, but we didn’t anticipate assigning a new headmaster just before a new session. There are many loose ends to be addressed.”

“So you say,” Sir answered jokingly. “I accept it as the price I must pay to have free rein of the place after we are done here today.”

Brie’s insides quivered at the thought of Sir unleashed.

A woman’s soft voice floated through the air. “How are you, Sir Davis? Are you happy with your new submissive?” Brie kept her eyes glued to the floor. Her mind raced to place the feminine voice, quickly identifying her as the Asian Domme who owned Boa.
Boa, the sub with a python for a cock.

Brie held her breath, waiting for Sir’s answer. Would he expose her mistake with Faelan in front of the other trainers?

“I’m finding the experience challenging and
quite
stimulating.”

Master Anderson laughed. “I bet you are, Thane. You picked a fine one to partner with. She won’t let you rest, I wager.” He hit Sir so hard on the shoulder that he momentarily lost his balance. “I have to admit
though, I was a little put out when you stepped down. It was enjoyable working with you, reminded me of our college days.”

Sir’s low chuckle was like music to Brie’s ears. “College was—”

Master Coen interrupted their reverie. “Enough of the reminiscing, we have work to do. Where’s Clark?”

The door opened as if on cue and Ms. Clark’s voice rang out loud and clear. “Back already, Davis? Wait… Miss Bennett, what are you doing here?” The woman stopped abruptly in her tracks and said sarcastically, “You do realize this is a
faculty
lounge.”

Sir’s reply was controlled, but with a slight edge to it. “Address me,
Rhonda. Not my submissive.”

Oh, what fun having Sir correct Ms. Clark on her behalf! Brie wished she could peek just to see the look on the female trainer’s face.

“Forgive me, Sir Davis. I am still wrapping my head around the fact you broke all protocol and collared a student. My apologies.”

“It is precisely due to protocol that I resigned,
Rhonda,” he said dryly.

Brie heard the disdain in his voice when he used Ms. Clark’s given name. But
why
was he calling her by her first name? Did they have a history together?

“It was foolish,” Ms. Clark snorted. “We’ve lost a perfectly good headmaster and the Center’s reputation has been compromised because of your impulsive actions.”

Mr. Gallant’s warm voice filled the room, making Brie’s soul sigh in happiness. “That is not true. Although people are certainly talking about the Collaring Ceremony, I have not heard any ridicule towards the school, nor towards Sir Davis himself. Do not exaggerate, Ms. Clark.”

There was one voice that was suspiciously silent.
Marquis Gray.