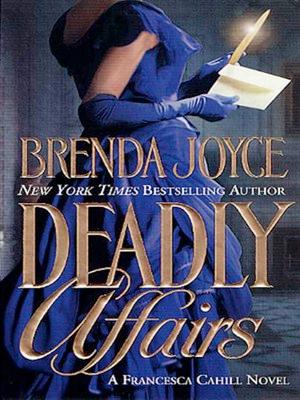 “The steamy revelations . . . are genuinely intriguing, and just enough of them are left unresolved at the book’s end to leave readers waiting eagerly for the series’ next installment.”

“Joyce carefully crafted a wonderful mystery with twists and turns and red herrings galore, then added two marvelous, witty protagonists who will appeal to romance readers . . . Add to this a charming cast of secondary characters and a meticulously researched picture of society life in the early 1900s. I can hardly wait to see what Francesca and Rick will be up to next.”

NOTE:
If you purchased this book without a cover you should be aware that this book is stolen property. It was reported as “unsold and destroyed” to the publisher, and neither the author nor the publisher has received any payment for this “stripped book.”

All rights reserved. No part of this book may be used or reproduced in any manner whatsoever without written permission except in the case of brief quotations embodied in critical articles or reviews. For information address St. Martin’s Press, 175 Fifth Avenue, New York, NY 10010.

“What do you think of this one, Miss Cahill?”

Francesca Cahill stood as patiently as possible, no easy task. She glanced down at the shimmering piece of apricothued silk fabric that Maggie Kennedy was holding up. “Why, that one is just as lovely as the others,” she said. Was it already nine o’clock? Had her father noticed that one of his morning papers was missing? Vanished, as it were? And would they ever be finished with this fitting? Francesca had two classes to attend uptown at Barnard College, a very exclusive institution dedicated to the higher education of women, in which she had secretly enrolled—and, thus far, not been found out by her mother, who abhorred the thought of her younger daughter ever being labeled a bluestocking.

For being an intellectual—and a Reformer with a capital
R
—could only interfere with Julia Van Wyck Cahill’s plans to successfully marry Francesca off—and the sooner, the better.

“This blue suits you, too, Miss Cahill,” Maggie murmured from where she knelt at Francesca’s feet. Francesca remained in her undergarments, with pins, a pincushion, and a measuring tape scattered about her.

“Please, Mrs. Kennedy, ‘Francesca’ will do,” she said with a genuine smile, glancing down at the redhead.

Maggie returned the smile tentatively. “So you wish for
the blue? I would do it as a day ensemble for you. The fabric is a bit stiff, and would be most flattering in a fitted little jacket and a skirt.”

“That’s perfect,” Francesca said, hardly caring. By now, surely, Andrew had gone down to breakfast and discovered that he had only the
Times
and the
Tribune
to peruse. Good God. Had she been insane to allow those reporters an interview last Tuesday while at the Plaza? Apparently her pride had overtaken her common sense. But hopefully no story would come out of that interview now. Yesterday’s news had been filled with the details of the Randall Murder, but no mention had been made of her name.

In spite of the fact that she had solved the case.

“Would you consider a Chinese red for an evening gown? It is a color most blondes cannot carry off, but you are so golden, it would be lovely on you,” Maggie said, standing.

Maggie looked at her oddly, as if sensing that she hardly cared about the ten new gowns she was ordering.

“I mean, I have a passion for red,” Francesca said, wincing a bit. It was hardly true, and after both the Randall Murder and the Burton Abduction, the color red now reminded her of blood.

Maggie walked over to Francesca’s immense canopied bed, which was covered with fabric samples. The bed dominated a large and beautiful bedroom and faced a seating area and a fireplace. She fingered the various silks, wool, and chiffon.

Instantly Francesca was alert. “Is anything wrong, Mrs. Kennedy?”

“No.” Maggie faced her, clutching a stunning piece of dark red fabric. “I was so surprised when you actually called and told me you needed so many new garments.”

Francesca smiled brightly. “My mother will be in heaven when she learns I have finally taken an interest in
my wardrobe,” Francesca said, and that was the truth.

Maggie looked at her. She was a faded redhead who had once, undoubtedly, been stunning, but a life of hardship had made her look fifteen years older than Francesca, who was twenty. Francesca guessed she was perhaps twenty-three or -four. But she had four children, and the eldest, Joel, who was eleven, was Francesca’s new assistant. She had recently hired him, as he had been indispensable in solving both the Burton Abduction and the Randall Murder, and he had even gotten her out of two life-threatening predicaments. He knew almost every inch of the city’s underbelly, especially the Lower East Side—as she certainly did not. He had even taught her how to bribe a person in order to gain important information. “Joel speaks about you constantly, Miss Cahill. He does admire you so,” Maggie added.

Francesca smiled. “He is a wonderful boy.”

Maggie did not smile in return. “He is often in trouble with the police.”

Maggie seemed relieved. Francesca wondered if she knew the extent of Joel’s activities. He was a kid—a child pickpocket—and the police had his photograph in the Rogues’ Gallery. “I am glad you think so.” Maggie held up the dark red fabric. “You will be the belle of the ball in a gown made from this brocade.”

Francesca looked at the bold fabric—it hardly suited her character, which was serious and intellectual, and although she had accepted every fabric sample thus far shown, she hesitated, thinking about Rick Bragg, the city’s police commissioner. Her heart skipped a little. She hadn’t seen him since Tuesday, when they had spoken intimately on the steps of the Plaza. “Do you really think I can carry off such a seductive color?” she asked, sobering.

“Oh, yes!” Maggie cried, her eyes brightening. And
when she smiled like that, the years of hard work seemed to fade from her face, and she looked young, vibrant, and pretty.

Francesca knew she should not imagine wearing such a gown for Bragg’s sake. After all, they were friends, and nothing more. They could never be anything more—he was a married man. Of course, his wife was a horrid and selfish creature who lived in Europe with her various lovers; Bragg hadn’t seen her in four years. He didn’t want to see her. He supported her selflessly, while she spent his every hard-earned penny, not caring one whit that a man in public service earned a moderate income. Thank God she was abroad, Francesca thought with heat.

She had never met Leigh Anne. She hoped never to do so. But she despised her, and she did not care if she was being unjust.

“Maggie, I know this might not be possible, but there is a party next week, on Thursday. My brother’s fiancée, Sarah Channing, is having a ball in honor of her cousin, Bartolla Benevente. Apparently the countess is newly arrived in the city and—”

Maggie smiled. “You know I work at night. I think I can have the gown ready for you, but we must plan on a final fitting Wednesday morning.”

“Really?” For the first time since Maggie had arrived for the fitting, Francesca felt genuine enthusiasm. She could imagine the look in Bragg’s golden eyes when he saw her descend the stairs in that bold red gown. In fact, she felt more than certain he would not be able to take his eyes off her. “The gown should be rather daring,” she said.

“It must be backless and low-cut,” Maggie said briskly. “I have a pattern that would be perfect. Here, let me show it to you.” She walked over to her worn leather valise.

Of course, Francesca knew that she must not think this way and she must not care if he admired her in any manner, much less in that dress. Still, it was easier to command
herself to think a certain way than to actually do so. She sighed, suddenly and immeasurably saddened.

“Are you all right?” Maggie asked softly, the pattern in her hands.

Francesca smiled. “I am fine.” She glanced at the bronze clock on the marble top of a bureau. God, it was nine-twenty now. She had to leave for school shortly. “Is that it?”

Maggie held it up. “This is the bodice. It is rather low, but I can make it higher. I can also put two tiny sleeves on it if that would make you more comfortable.” She held up another piece of the pattern. “The back can be made higher as well.”

Her heart skidded uncontrollably now. What was she doing? Thinking? “I rather like it that way,” she said, flushing. Would she be able to be so daring?

And had Bragg seen the
Sun?
Had he seen what that cur, Arthur Kurland, had written about her? And how had Kurland known about her role in the solving of the Randall Murder? He hadn’t even been present when she had given all those reporters an interview!

Maggie tucked the pattern pieces away. “Well, I am done for now. You have ordered two suits, two skirts, three shirtwaists, two day gowns, and one evening gown. I should love to match shoes for you, Miss Cahill,” Maggie said earnestly.

Francesca was about to tell her to do whatever she wished, when there was a knock on her door. Before she could even answer, the door opened, and her sister, Connie, walked in. Instantly the beautiful blonde’s eyes widened in surprise as she stared about the room.

In Fire Forged: Worlds of Honor V-ARC by David Weber
Straddling the Line by Sarah M. Anderson
All Fall Down by Carter, Ally
This Place is Death (A Curse Keepers Secret) by Swank, Denise Grover
The Fate of Nations Book II The Harvest by Watson, Laura
The Wolf and the Highlander (Highland Wishes) by Jessi Gage
The First Wife by Emily Barr
Sister Freaks by Rebecca St. James
Fried Green Tomatoes at the Whistle Stop Cafe by Fannie Flagg
Flirting With Disaster by Ruthie Knox