Read Breakdown (Crash into Me) Online

Breakdown (Crash into Me) 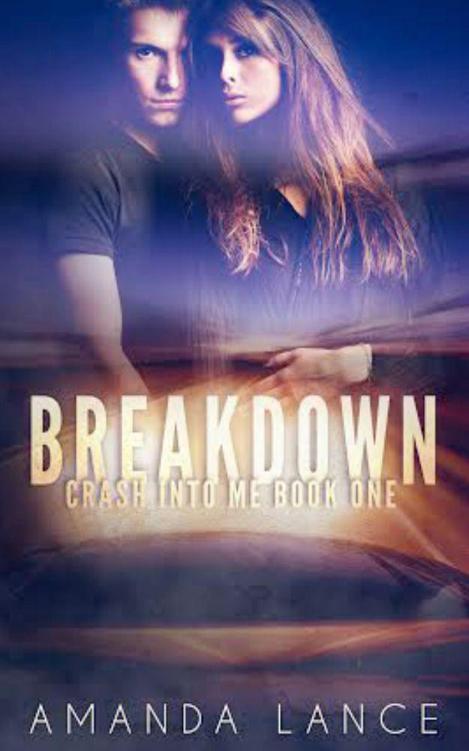 All rights reserved. No part of this book may be reprinted or reproduced or utilized in any form or by any electronic, mechanical, or other means, now known or hereafter invented, including photocopying and recording, or in any information storage or retrieval system without express permission in writing from amandalance.com

Special thanks to KMS Editing, Sarah Cotchaleovitch, and Casey Harvell. You lovelies not only made this project possible, you made it come to life. I’d also like to thank Steph White for her wicked cover design skills and not filing a restraining order against me.

And of course, lots of love to Scottie for answering all of my annoying car questions. Vroom! Vroom!

On the day I went to die, I didn’t leave a note.

Don’t get me wrong, I had written plenty. One rough draft after another found itself in the garbage. However, after a while, I thought the entire ritual itself was cliché, basked in the glory of teenage angst. And being all of twenty years old now, I felt too old for the stereotypical crying during sad songs and mulling over suicide notes.

Still, I had made a last ditch effort to scribble something out. It too, however, ended up in the paper shredder. This time it wasn’t just because I found a grammatical error in my drafts or even a few, for that matter. Ultimately, when it came down to it, I couldn’t find the right thing to say, the words to make my act sound justified without being too pathetic.

I couldn’t find the right excuse.

Maybe it also didn’t help that I knew there would be no one around to read it.

In all fairness, I had gone to some decent lengths to make sure no one would even know I was gone—not for a while, anyway. It wasn’t exactly a rare occasion that mom and dad were out of town at the same time. Though they didn’t exactly make it a secret, either, that they both planned their work trips to avoid one another. But to have both of them gone on the same weekend was an ideal situation that didn’t occur often.

It was already after midnight when I switched from my pajamas into my jeans and a light sweater. It seemed silly, but I went ahead and put on the wool peacoat mom had gotten me for Christmas. It was itchy and way too flamboyant for my taste, but that didn’t stop mom from buying it for me anyway, or the furry boots that seemed to go with it. I thought they looked like they were made from a couple of Ewoks, but I put them on, too.

Maybe that was
my
equivalent of a note—my way of apologizing.

After I got changed, I pulled my hair up high, not bothering to smooth out the bumps or detangling the knots that came with it. Even before my hands were finished with the ponytail, my dark locks were a mess. But I didn’t care—or at least I didn’t want to care. I wasn’t shallow enough to think that it somehow still mattered, especially considering what I would look like when they found me. For an instant the ghoulish image made me smile. Looking in the mirror, I vaguely wondered if the pooled blood around my head could possibly make my hair any darker. Would my brown eyes glaze over after I was gone? Or pop out on impact? Certainly, an open casket funeral would be out of the question.

I glanced at the drawer of unopened makeup mom had gotten for me over the years and slammed it shut. Would they leave my room the same afterward? A shrine to show what good parents they were? Or would they transform it into something else as soon as the wake was over? Using the excuse that they
needed
to move on? My eyes moved to the corner without even thinking about it. Suddenly, it was incredibly easy to picture an elliptical machine there, a stack of unused yoga mats and dusty dumbbells in the spot where my bed was now. How long would they wait until they remodeled? A month? A year?

I decided on the flight from the overpass on Port Elizabeth Street, surprised by how well the location worked out in my favor. Was it a sign that my plan would fall so perfectly into place? Maybe not. But it sure as hell made it a lot easier to follow through with.

The Port Elizabeth Street consisted of a single-lane overpass, with a busy four-lane highway beneath it. While it wasn’t a pretty way to die, at least this way I was guaranteed a contingency plan. If somehow the 100-foot drop to the pavement didn’t kill me, I had to figure a passing vehicle going 80 miles an hour or so would.

Since my tactical idea was to go head first, I made sure my driver’s license was secured in the pocket of my jeans before leaving home for the last time. I did this along with making sure my car was safely off the overpass—no sense in holding up traffic any more than necessary. Like having a piece of identification on me, I wanted to make things as easy as possible for everyone else. After all, just because I was going to die didn’t mean I had to ruin everyone else’s weekend.

Just like mom remodeling my previous living quarters, it was all too plain to see some.

coroner in the morgue trying to put my face back together while some poor intern filled out the Jane Doe paperwork. Meanwhile, traffic cops below and above would have to direct cars around blood splatter and skull pieces, while others waited for the tow to come for my Subaru. When a couple of state troopers solemnly knocked on the front door of my house, how long would they stand there before they realized no one was home?

I left my keys by one of my front tires and glanced up at the medical office. I was almost certain that they were closed on Sundays and probably only open for a few hours on Saturday, so if anybody thought anything of my car, it probably wouldn’t be until Monday morning. By then, dad would be grabbing a ride home from the airport, and mom would be checking out of her hotel. If everything and everyone stayed on schedule, they could find out about me together. And who knew? Maybe bonding over the “tragedy” would help their marriage. Christ knew that aspect of their life couldn’t get any worse. Maybe they could cry together. They could “reconnect” over the charity they’d start in my name, start having a weekly date night with the support group as the feature event…

Despite the little jokes I made to myself, I walked slowly from my car to the overpass, kicking random pebbles at my feet until I was out of the parking lot and well down the street. I rounded the corner and felt the weight of my heavy ponytail shift back and forth. The only time I did stop was when I realized that I hadn’t thought to hesitate at all or even once reconsider my choice. I had wanted to die for so long that anything else was just a fictional possibility, an alternative ending in the DVD extras. Sure, I could think about other options all I wanted, watch a happy ending over and over in my head, but it would never be real. Death, however, was as real as it gets.

I looked back, but I couldn’t see my Subaru anymore. I had traveled too far to even see it with squinting eyes, but didn’t feel as bad about it as I thought I might have when daydreaming about it originally. Instead, I felt nothing, no sadness like you always see in the movies or music videos, but no relief like I had hoped, either. Alternatively, there was a weird sort of indifference that kept me even-keeled, apathetic to my own forthcoming demise. It was as if I weren’t even the one experiencing it, like I wasn’t even the one about to cause it.

The Potluck Club&#8212;Takes the Cake by Linda Evans Shepherd
The Dig by Cynan Jones
Daughter of Lir by Judith Tarr
By Fire, By Water by Mitchell James Kaplan
Colossus by Niall Ferguson
Driftnet by Lin Anderson
Find Her, Keep Her by Z. L. Arkadie
Death and the Running Patterer by Adair, Robin
The Islands of Dr. Thomas by Francoise Enguehard
4th Wish by Ed Howdershelt