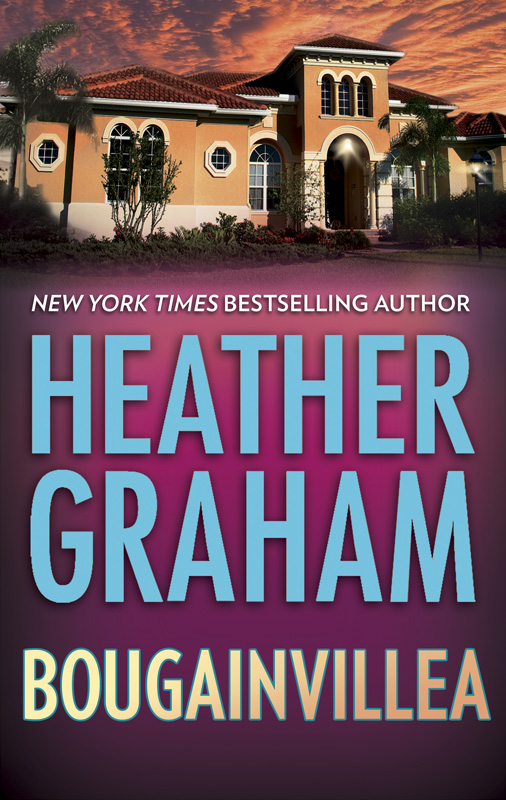 Here's another chance to read this unforgettable tale of romance and suspense from
New York Times
bestselling author Heather Graham!

After twenty years, artist Kit Delaney returns to the lush Florida estate that harbors a million childhood memoriesâ¦and a deadly legacy. Has the man she's fallen for restored her to her birthrightâor lured her to her doom?

“Heather Graham will keep you in suspense until the very end.”

“Nobody does romantic suspense better than Carla Neggers.
The Whisper
is big, bold and stunningly effective. Evidence of a writer at the absolute top of her game still climbing higher.”

“Suspense, romance, and the rocky Maine coastâwhat more could a reader ask for?
The Harbor
has it all.â¦ A story so vivid you can smell the salt air and feel the mist on your skin.”

THE NIGHT IS FOREVER

THE NIGHT IS ALIVE

THE NIGHT IS WATCHING

AN ANGEL FOR CHRISTMAS

NIGHT OF THE VAMPIRES

NIGHT OF THE WOLVES

HOME IN TIME FOR CHRISTMAS

DEAD ON THE DANCE FLOOR

A SEASON OF MIRACLES

NIGHT OF THE BLACKBIRD

I
t had been foolish to make threats, Marina knew. Obviously. But, then, she'd been so angry, frustrated and powerless, and in all honesty, her temper had always been her downfall. Well, there was nothing she could do about it now. Her words couldn't be taken back.

She blinked back a sudden onslaught of tears, thinking of the people she had not meant to hurt. Including herself, she reflected wryly. But she had been feeling weepy. Still was. But she shouldn't have been drinking. Drinking always compounded everything. Along with the guilt, anger, and sorrow that were going to haunt her when she turned the world upside down tomorrow, she was going to have a crippling hangover.

She quickened her pace along the walkway that led deeper into the grounds of Bougainvillea, the vast Delaney estate, knowing that she might somewhat calm her state of anguish if she could just reach the beach, feel the soft breeze that came with the late afternoon, and watch the sunset falling over the pond near the docks. This is what she would miss. She loved the property as no one else did. Unless it wasâ¦

Oh, they were all despicable. Seamus, Martin, Lenore, Josh, Kaitlin. Sometimes even David, because he could look at her with such strange eyesâ¦

Then, if the household wasn't enough, there were the neighbors. Always there. Martin Callahan and his darling little Shelley. And Eli.

The ones she needed to be thinking about were Mark.

Not now, she was in such a roil of anger!

She quickened her pace and reached the beach at last. The scene before her was postcard perfect. Lazy palms, drifting in the breeze. Golden sand, stretching out to the surf. The water, with small whitecaps forming that just caught the dying light, and dazzled beneath it like diamonds. A little crane strutted along the beach, at once elegant and gawky. A gull swept down, and the crane took flight.

She heard her name called, and she knew his voice. As she turned back, she trembled, both with fury and because she wanted what she shouldn't have. Even when she knew better.

“Don't!” she told him as he caught up with her on the beach. “Don't come near meâ¦this is entirely wrong, and I'm going to leave, do you understand?”

But he kept coming anyway, and his features carried the same agonizing torment as her own. He reached out and pulled her into his arms and ended her tirade with a passionate kiss. In those first moments, she would have pulled away. But he was stronger, and proving
his force. She stiffened, willing to fightâ¦but for no more than embarrassingly brief seconds. Then a sense of nostalgia seized her. She was leavingâ¦just one last taste of everything that was forbidden, and she would spend her life repenting her sins, repairing the damage she had doneâ¦

With that logic and illusion, and of course, a bit of the alcohol coursing through her bloodstream, she began kissing him in return with equal passion. Hot, wet, greedy kisses as they fumbled with each other's clothing. He shoved her skirt up to her hips while she ripped his shirt from his pants, and slipped her hand beneath his belt line, fondling his erection. Half undressed, they tumbled to the damp sand together. They made love desperately, like a pair of maddened animals, natural perhaps, for the lover she had taken. For brief moments in the aftermath of their violent mating, she was sated and satisfied, as if something had come to completion. Yes, she'd needed this once more. A tempestuous and dramatic goodbye. If
nothing
else, we've had this passion, burning too brightly perhaps, so illicitly, but precious nonetheless. Because it's so sweet to have this power, something I can lord over one manâ¦

That would devastate another.

But she reminded herself once again, she was leaving. And she would use the years ahead to atone for all that she had done.

Tomorrow, she would become everything that she should have been all along. A good wife. Lord knew,
her husband deserved as much. More than that, she would be a good mother. She had always intended to be.

Tomorrow she was leaving. Before that, however, she would see to it that she carried out her threats. She meant to tell everything that she knew.

She meant to atone.

And so, by God, would the others.

But that would be tomorrow! Her resolve was strong; she could and would change. But for now, she needed to cherish these last few precious seconds. She would first finish what she had begun, then she would leave, and never look back.

She had just seconds left.

But for the moment, they lay side by side, both aware that they were going to have to rise, and deal with the fact that they'd mangled each other's clothing and that they did have to go back to the house. But she didn't want to talk yet. She just wanted to feel what it was like to lie beside him as if she belonged there. The sun had now created beautiful crimson streaks across the sky. The ocean was darkening, the whitecaps would soon have to look for moonlight, and the color of the air was dusky and gentle and the breeze was sweetly sensual.

“Shh. Just close your eyes. Hold me, please. Just for a minute.”

He held her. He closed his eyes, as she did. The palms whispered softly as the breeze lifted them.

The parrots were back.

Early every evening, the little buggers escaped their tourist-attraction home and hightailed it across town. They landed in the trees, and they began squawking. Making tea in the little bungalow on the Delaney property that had been her home since 1935, old Mary O'Hara, retired now from her post as head housekeeper, looked out her rear windows.

“Birdies!” she exclaimed with disgust. “Bloody, wretched birdies!” she continued, raising her fist toward them. She shook her head, wondering how any creature that screeched so loudly and annoyingly could entice a paying audience. Ah, well. The parrots hadn't always come here. Maybe they'd find a new place to visit soon.

She made her tea, sat in her rocker and turned on a repeat of
Hollywood Squares.
She just loved game shows. And at her ageâ¦well, there were only so many pleasures left. She raised the volume on her television. All right, she was nearly as old as God himself, and maybe she was losing her hearing a bit, but it was those bloody birds forcing her to turn the TV so high, and that was a fact!

She paused for a moment, predicting that sometime tonight Marina would come. Mary's hearing might be bad, but she did still know what was going on around the place. She believed that she had talked the girl into her senses. Marina, for all her madness, was one of those few pleasures Mary had left, along with her reruns. Marina always made her laugh. Mary loved the
girl, and knew for her own good, Marina had to leave. But she would come to say goodbye. But until thenâ¦

Mary turned up the television again. The birds were so loud! She simply wasn't able to hear any of the punch lines.

Marina had been too sated, and too wrapped up in the drama of her own life, to notice anything else in the world. Lying there, in his arms, on the beach, was, at least, far too perfect an ending.

She had become too comfortable, and she had actually dozed. So much for the great trauma of guilt and proposed redemption.

She awoke slowly, groggily, feeling as if she already had a hangover. She thought at first that it was him tugging at her to awaken her, that he wanted to make love again.
No.
She had said her goodbyes. And there was someone else who mattered more now, someone who mustn't pay for her sins. She opened her eyes. Her head was foggy. She could barely move.
It wasn't himâ¦was it?
She blinked, thinking incredibly briefly that it might be good that they had been caught together half-naked on the sand because that could force everything out into the open. Everything. She could just admit it all, not just this, but the entire truth of everything at Bougainvillea, and her fellows in deception and sin would be brought to answer for everything that they had done as well. All the duplicity and the illicit truths. Those who were innocent could choose whether or not to forgiveâ¦

She realized that it was not her lover trying to awaken her. She was beingâ¦dragged. And she didn't
just have a hangover; it was something else. She could barely twitch. Barely think, function, reasonâ¦

More by Heidi Marshall
Beans on the Roof by Betsy Byars
Panic by Sharon M. Draper
The Pyramid Waltz by Barbara Ann Wright
A Wizard's Wings by T. A. Barron
Artnapping by Hazel Edwards
Fortitude (Heart of Stone) by D H Sidebottom
To Have and to Kill by Mary Jane Clark
Journey Between Worlds by Sylvia Engdahl
Stars So Sweet by Tara Dairman