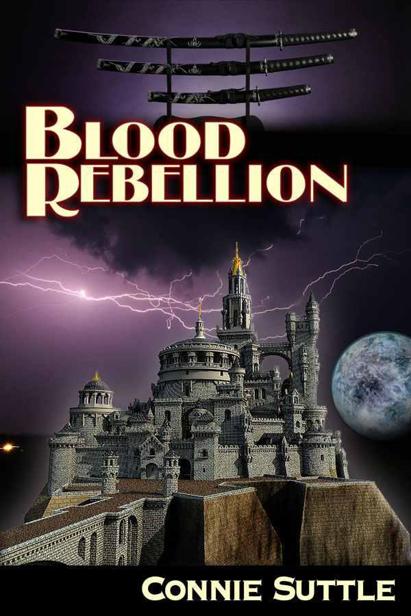 This e-book is a work of fiction. Names, characters and incidents portrayed within its digital pages are purely fictitious and a product of the author's often warped imagination. Any resemblance to actual persons, living or dead, is purely coincidental.

Other books by Connie Suttle

(Legend of the Ir'Indicti Series)

I lie inside a cage. It is bitingly cold here, and no respite from the chill will be offered. With bars all around me, there is no privacy. No place to hide. It has been thus for centuries and my captors will not change it, no matter how much I beg or the benefits I offer them in exchange. They merely laugh, as I am their prisoner and subject to their whims anyway.

Have I tried to better my conditions? Many times. At first they made promises, to placate me. But no promise was ever fulfilled. My mistake, I know. They have only taken from me of late—of my flesh and what remains of my sanity. They have asked no questions. That is their mistake. The time is coming.
Soon
. I look forward to the ending of my misery.

"I didn't do it!" Davan shouted as he was dragged by two guards past rows of prison cells. His trial was a sham; without proper representation, he'd been sentenced (as so many others before him), to death by vampirism. Accused of stealing from the state, the sentence was the same for anyone convicted of that crime. And everyone was employed by the state; everything was owned by the state. Oh, there were managers and supervisors who thrived and prospered; nearly all of whom were corrupt upon the world of Beliphar.

Once, Beliphar had been a mighty world and a member of the Reth Alliance. No longer—a new regime had come to power, eliminating elected officials quickly. They claimed it was to reduce the amount of government in the Belepharans' lives, but it had come to mean the opposite. Those who'd risen to power had stayed in power and the world of Beliphar labored under their harsh authority.

The Reth Alliance had withdrawn membership quickly, leaving Beliphar to fend for itself. The Belipharans suffered and the small vampire population was quickly captured and condemned for trumped up crimes against the state. Vampires, like everyone else living on Beliphar, were now controlled by those in power.

Vampirism was dealt as a punishment for most crimes and vampires were held in check with special cuffs and chains. They worked in street crews at night or in the mines, did labor on state run farms or processed fuel, chemicals and pharmaceuticals. Anything that might be done at night that could prove harmful to humanoids was ultimately done with vampire labor, as environmental controls on Beliphar were all but abandoned.

Still, Davan proclaimed his innocence and his cries were truth, but he'd been sentenced anyway and was now being hauled down a long, sterile hallway toward a small, windowless room. A vampire waited there—a vampire controlled by the courts and its officers. Davan would be turned unless he died in the attempt. As a male, his chances of surviving the turn were very good. Any female convicted knew her punishment was a death sentence—perhaps one in twenty-five thousand females would turn. Every vampire on Beliphar was male.

Davan stepped up his struggles as he reached the small, sterile cube of a room. A cuffed and controlled vampire waited inside, accompanied by a supervisor with a controlling wand. "No! In the name of the light, no!" Davan shouted. A blazer stick was pressed against his neck and current shot through his body. The resulting pain forced him to his knees as he howled in agony. Davan wept and cursed as the guards jerked him to his feet.

"Davan Falthis," one of Davan's guards replied; Davan was still weeping and unable to answer.

"Davan Falthis, you have been sentenced by the state. Your punishment is vampirism, after which you will serve the state that you conspired against," the supervisor droned in a detached voice. "Load him onto the table." Davan could only moan and whimper as he was hefted onto the stainless-steel table and strapped down; body, arms, legs and neck. The two guards retreated to the corners of the room.

"Do your duty, vampire," the supervisor snapped at the cuffed vampire. He nodded and pulled a steel bowl from beneath the table. It would catch the excess blood when the prisoner's wrists were opened.

Tears ran down Davan's cheeks—he had no idea how his life had come to this—he'd trained as an accountant and had done his duty for the state for thirty years. Now he was in his mid-fifties and someone, a supervisor somewhere, had taken money, laying the blame on him. Davan had been sentenced for someone else's crime.

"You will not speak or cry out," the vampire laid compulsion. Davan was still frightened—the vampire had no control over that. Davan watched in terror as a sharp claw appeared on the vampire's finger, and then the claw slit his left wrist, three times—lengthwise. More tears fell as Davan heard his blood dripping into the bowl.

Can you hear me?
A voice sounded inside Davan's mind as his right wrist was opened.

Hear who?
Davan was terrified, thinking he was hallucinating during his final moments.

I am the vampire
, the voice came again.
Do not be afraid. I will do my best to keep you alive. My blood is oldest upon Beliphar.

Keep me alive for what?
Davan still thought he was hallucinating.

We still have hope
, the vampire replied.
Close your eyes, it is almost time
.

"Something is going on with the Reldani," Dragon sighed and settled onto a barstool at Kiarra's kitchen island. Dragon and Devin had come for a visit—to let Kiarra know they'd gotten a whiff of strange events during a trip to Falchan to buy new leathers. Dragon's dark eyes were narrowed in concern and his usual, enigmatic expression was missing, replaced by a few creases of worry on his forehead. Devin moved his long braid aside and rubbed Dragon's back as she sat next to him. If the former Dragon Warlord showed signs of worry, then there was definitely something going on.

"What's that?" Kiarra shoved white-blonde hair over a shoulder and handed Dragon a cup of Falchani black tea. Devin's cup was served next—she and Dragon both loved the dark brew.

"You know the Reldani can never agree on anything—especially when it comes to who's in command," Dragon sighed. "They have small principalities everywhere, commanded by whoever is strong enough to beat any contenders back. They raid across the borders constantly, when they're not fighting among themselves, that is. Until now." Dragon sipped his tea and nodded in appreciation to Kiarra.

"So, what has changed?" Kiarra sat next to her adopted daughter Devin and pulled her close for a hug. Devin smiled and rested her head against Kiarra's shoulder.

"The Reldani are banding together, that's what. Under two leaders," Dragon grumbled. "That's unheard of. Something is wrong, here. I feel it."

"Something
is
wrong," Belen agreed, appearing in a brilliant flash of light. "I was on my way to warn you and the others." Belen, Chief of the Nameless Ones nodded to Dragon, First among the Saa Thalarr. "It is something that bears investigation," Belen went on. "And it would be prudent to send several of ours to help the Falchani army while you investigate. You have permission to join the Falchani army and act as you see fit in this," Belen nodded as he muted the light around him.

Dragon blinked in surprise—joining the Falchani army would be seen as interference under normal circumstances. Belen's permission merely reinforced his opinion of the unusual events on Falchan. Somehow, either an old enemy had resurfaced or a new one had come into being. Perhaps both. Dragon schooled his face as that thought crowded his mind.

"I can gather all our Falchani and sign up as a volunteer band from the hills—nobody will recognize us," Dragon agreed.

"I'll go, too," Devin offered. Devin, trained by Dragon and Crane in the art of the blade, was deadly with the Falchani swords she often carried.

"That goes without saying," Dragon smiled. "When should we go, Revered One?" he nodded respectfully to Belen.

"Soon." Belen inclined his head. "I will let you know when. There is one other thing, too."

"Take the Vampire Queen with you. I care not how it is accomplished; I only know that Lissa's presence will prove essential." Belen disappeared quickly.

"Now how the hell are we going to convince Lissa that she has to go to Falchan?" Kiarra sighed, shaking her head. Belen had left before she could ask more questions.

"Mom, she's married to our boys," Devin grinned, pointing to herself and Dragon.

"Well, there's that, I suppose," Kiarra grinned back.

"Ranos grenades." Erland Morphis kicked the pile of formerly unbreakable transteel wall with a booted toe. Chunks of transteel littered the entry of the Sand Swept Casino, which Erland owned and operated on the gambling planet of Campiaa. Erland was so angry he hadn't bothered with a disguise, and those brave enough to withstand his anger were allowed to see what few on Campiaa ever witnessed—the most beautiful male they'd likely gaze upon in their lifetime. Merrill and Adam, who owned the Moonstone Casino next door, stood beside Erland, examining the damage with the Karathian Warlock. Their casino had been hit as well, but not as hard as Erland's.

"Ever since Divil San Gerxon was killed, his brother Arvil sees the need to flex his muscle, just to let everyone know he's in charge," Adam muttered, his gray eyes narrowed in anger. "And now, Arvil has managed to buy and smuggle in Ranos technology. If he ups his demands, we'll be forced to pay."

"He already gets twenty-five percent," Merrill pointed out. "Just for the privilege of putting up a building here."

"We still get good information," Erland sighed. "I wish there were a way to coax the wealthy gamblers away from here, though. The information would come with them—it can't be helped."

Erland, Merrill and Adam all had a common purpose in owning casinos in what was touted as the gambling mecca for the worst criminals—those who lived outside the Reth Alliance and its laws. Campiaa saw its share of deals for drugs, weapons, assassins and any other illegal enterprise. Much of it, unfortunately, was aimed at the Reth Alliance. Drugs and weapons were shipped in, with the occasional criminal—all arranged and paid for through contacts that regularly visited Campiaa.

Wealthy gamblers from the Reth Alliance also found their way to Campiaa—it was a sign of their wealth that they could skirt Alliance laws and find ships to transport them. After all, anything could be had on Campiaa—for the right price. And one could get information on any illegal activity, if one knew where to listen. Adam and Merrill always listened for information that might affect the Saa Thalarr. Erland listened for other reasons.

Night on Fire by Ronald Kidd
Sneaks by B Button
Lost! by Bindi Irwin
The Aviator's Wife by Melanie Benjamin
Beyond the Storm: Quilts of Love Series by Carolyn Zane
The Days of the King by Filip Florian
Stray Cats [High-Country Shifters 2] by Melody Snow Monroe
The Queue by Basma Abdel Aziz
Checkmate by Steven James
Sleeper by Jo Walton