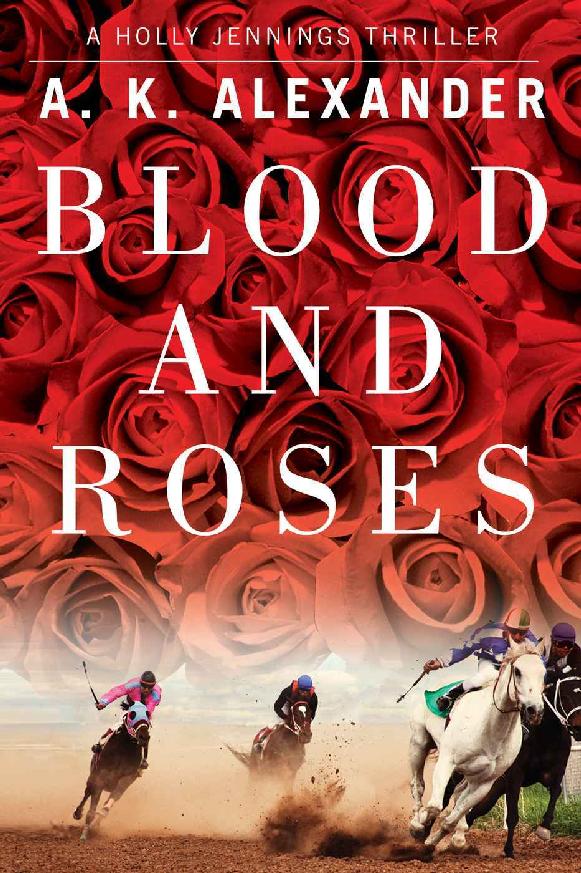 All rights reserved.
No part of this book may be reproduced, or stored in a retrieval system, or transmitted in any form or by any means, electronic, mechanical, photocopying, recording, or otherwise, without express written permission of the publisher.

For my dad, who helped me with the plotline before he passed away, and I believe he helped me write the book from the other side. He was a true and dedicated horseman his entire life who aimed to improve the lives of all horses. He was my biggest fan, and a true inspiration.

Tommy Lyons was on a high.

He strolled through the jockey locker room, sweat, anxiety, irritation, celebration all culminating in the air as each jockey relived his high and low of the day. Exhausted jockeys tossed bright-colored silks into gray metal lockers to land amid religious relics. These guys typically prayed. At any given second while riding a thundering thousand-pound animal traveling at 40 mph in only 2.5 seconds, life could be ripped away or changed drastically with one fall, one mistake.

And it happened—all the time.

The scent of leather and horse also remained on their clothes and skin, smells they all relished. They were jockeys, and this was Del Mar, California, where the surf meets the turf and the track’s backdrop of the Pacific Ocean just to the west made everything a little bit sweeter and brighter.

Except when you lost.

No ocean blue or land of the beautiful could take away the sting of a loss. But losses came with the job.

Except for Tommy Lyons these days.

Nope. Tommy was on that roll.

“That mare another Zenyatta, hombre.” Juan Perez slapped him hard on the shoulder. Tommy winced, but even an ass like Perez wasn’t going to get to him today.

“Oh, you don’t know the half of it, man. That mare is going all the way. I say she’s gonna win the Infinity Invitational.” Tommy set his helmet inside his locker.

“You think, Tommy?” It was Pete O’Leary, an old-timer in this business. He’d won more races over the years than anyone else in the jock locker room. He had become something of an icon. And in most everyone’s opinion, he should’ve retired by now. His age was showing. He was losing the better mounts. He had a bit of a drinking problem, and rumor was he did his fair share of drugs to keep his weight under control. No shock there. It wasn’t beneath any of the men and women in the sport to use a little help to stay in the game.

“Yeah, man. I think. I definitely think.” Tommy clasped his hands, folding his fingers out and raising them over his head, stretching.

Everyone was talking about the Infinity Invitational. This race was going to be huge, and it was a first. A first in many ways.

The racing commission had changed the bylaws. Horse racing could take place in the state of Nevada—after a lot of politics and an exchange of cash.

The sport needed a face-lift. Bad press, a seediness that had seeped in over time, had torn at the walls of a great tradition, and an honorable sport had suffered a loss in spectators. There was ridicule, and for several years now there had been talk about how to make changes. Owners, trainers, and other industry professionals had come together and used that old adage “Money talks.”

Some big-time investors swooped in and big money was set down. Horse racing could take place in Nevada again—specifically in Las Vegas. And although racing was tried back in the sixties in Vegas and failed badly—due in part to Mafia corruption—everyone agreed that there was no better time to bring the sport back
to the glitz and glamour with which it had once been associated. Bring it back to the days when horse racing was America’s favorite pastime and the biggest spectator sport out there.

A grand track had been built on some land just outside the strip.

A major casino had gone up with Edwin Hodges’s name behind it. Hodges was a billionaire who loved the ponies, and of all the investors involved, he’d contributed the largest sum.

The stage had been set.

The biggest purse ever to be offered in the world was being offered at the Infinity Invitational.

The theme of the race was eighteen. Edwin Hodges was an interesting guy and he had a thing about the number eight, being that it was the sign of infinity. They’d named the track the Infinity, Las Vegas. And eighteen horses would be invited. Eighteen three-year-olds. The race and speculation about who would be invited were all anyone and everyone was talking about these days.

Tommy Lyons laughed with joy at the prospect of being headed to the Infinity at only twenty-two years old. It was good to be alive.

God, this was fun. Winning was so much fun.

“She got some gas, that’s for sure.” O’Leary palmed his thinning hair and looked up at him from the bench on which he sat in front of his open locker. He smiled weakly at Tommy, tiny fine lines around his stark blue eyes crinkled up on the side of his face. “Beautiful animal.”

O’Leary gave him a dirty look. “Don’t disrespect Elena Purdue around me.”

“Rode a horse like that once. Man, that colt was one fast son of a bitch. Nobody’s Business. Amazing animal.”

“Yeah,
cabrón
. No one could forget that horse,” Perez chimed in. “Fast horse. Too bad what happened though.” He shook his head and tsk-tsked under his breath.

O’Leary sat there for a second. The air settled in thick as some of the guys stopped and waited.

They got what they were waiting for.

O’Leary slammed his locker and jumped up. He was in Perez’s face as quickly as a fly discovers a pile of horse shit. He shoved the younger jockey hard. “What you sayin’, Perez?”

“Nothing, hombre.” He raised his arms halfway up, palms out, shoving his chest toward O’Leary in a gesture that said
fuck you
rather than
nothing, hombre
.

The jocks in the room did nothing to stop the spectacle they were witnessing.

Everyone knew what Perez was saying.

Back in the day, Nobody’s Business was the first horse in over a decade expected to win the Triple Crown. The colt and O’Leary had it, but in the final turn O’Leary got aggressive with the horse and jockey next to him. Nobody’s Business gave them a good bump. Nobody’s Business tripped, and he came down hard, fractured a proximal sesamoid bone in his front right leg. Two other horses crashed as a result, one of the jocks badly injured—paralyzed from the waist down. Nobody’s Business had to be euthanized on the track. An investigation ensued and O’Leary was acquitted, but the horse was dead, and many in the business blamed O’Leary. Not only did the jockey lose his reputation that day, but also much
of his career. The hall of famer had gone down in disgrace, but Tommy liked him.

It was a tough business they were all in, and they didn’t always make good choices.

They died a lot on the track.

Tommy walked over to them. “Hey guys, come on. Not here. There’s no reason for this. The past is the past, Perez. O’Leary, everyone knows you’re good people and one of the best jocks ever. Relax.”

O’Leary looked as if he might pounce again. “I’m warning you.”

“Fuck off, Perez,” Tommy said. “Why don’t you go get a beer and chill out? No one needs your bullshit today. You’re a blowhard, man.” Tommy was feeling just a tad more confident than usual. Normally, he would have bitten his tongue when it came to talking smack to a colleague—especially someone like Perez, who was one helluva rider and also a bit shady. That was the word anyway. But today, Tommy was on that roll and talking smack came easy.

“You know what? You just made my shit list, too, Lyons.” Perez walked past his locker and slammed the door, leaving the jock’s room and the tension inside.

Secret Desires by Fields, Cat
Zero Option by Chris Ryan
The Princess and the Billionaire by Barbara Bretton
And Then There Were None by Christie, Agatha
Black Coven (Daniel Black Book 2) by E. William Brown
Lethal Combat by Max Chase
Lizzie Zipmouth by Jacqueline Wilson
Challenging Saber by S. E. Smith
The Puzzle Master by Heather Spiva
Tangled in Chains by SavaStorm Savage