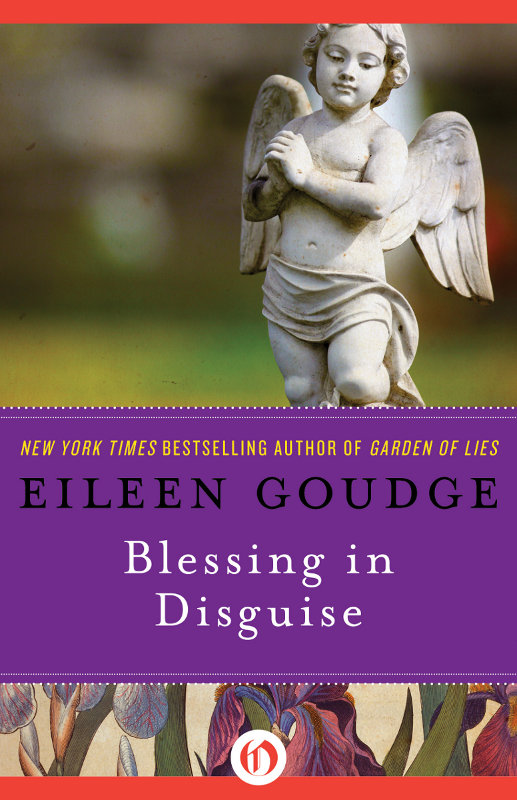 PRAISE FOR THE WRITING OF EILEEN GOUDGE

“Eileen Goudge writes like a house on fire, creating characters you come to love and hate to leave.”

“Once you start this wonderful book, you won't be able to put it down.”

“Beautifully intertwines â¦ two stories, two generations â¦ [Goudge's] characters are appealing both despite of and because of their problems.”

“Eileen Goudge has crafted a beautiful tale of loss, redemption and hope.
Woman in Red
is a masterpiece.”

“A lovely book, tender, poignant and touching. It was a joy to read.”

“A page-turner â¦ with plenty of steamy sex.”

“Goes down like a cool drink on a hot day.”

“Goudge's adroit handling of sex and love should keep her legion of fans well-sated.”

“This novel is the ultimate indulgenceâdramatic, involving, and ringing with emotional truth.”

“Romance, both old and new, abounds. Fans of Goudge's previous books, romance readers, and lovers of family sagas will enjoy the plot, characters, and resolution.”

“A touching story with wide appeal.”

A Biography of Eileen Goudge

It had to be some kind of emergency, Grace thought. Why else would Daddy be driving so fast? She looked over at his tightly clenched mouth, at the creases in his cheeks like long cracks in a boulder. Most of the time Daddy laughed a lot, and when he did the lines in his cheeks swooped up in a way that always made her think of ribbons on a wonderful big present.

But he wasn’t laughing now. When his secretary called a little while ago Grace had heard him talking in a low rumbling voice, as if he were trying to calm Margaret down and at the same time keep her and Sissy from overhearing. But what could have gotten Margaret so upset? At her desk in the front room of Daddy’s big paneled office, she always looked so smooth and sensible. Daddy’s favorite joke about his secretary was that she ought to be in charge over at the Pentagon instead of merely running his office in the Senate building.

Margaret almost never phoned Daddy at home, and when she did it usually had to do with important papers needing to be dropped off, or an urgent message. It was
her
job, Margaret had once told Grace, to keep people from pestering Daddy.

Especially on weekends. Lots of times when he couldn’t come home to New York, Grace and Sissy (escorted by Nanny if Mother was too busy) took the train to Washington to stay with Daddy at his apartment on P Street. And if someone who’d managed to get past Margaret called, Daddy would get off the phone as quickly as possible, then give Grace his special it’s-nothing-that-can’t-wait-till-Monday wink.

People were always calling or writing her daddy. People who were broke, and needed a job. People who wanted his help getting laws passed. Black people came to him, some with angry demands, some with tears streaming down their faces to thank him for everything he’d done for their cause.

And now, strangely, it was Margaret who needed Daddy. As soon as he’d hung up, Daddy had hurried them out to the car, without even waiting until Nanny got back from church.

The townhouses and crowded sidewalks of Old Town Alexandria were giving way to the lawns and tree-shaded houses of Mount Vernon. Grace clutched the Buick’s shiny handle. Suppose they got into an accident, and she had to jump out quickly? The way Daddy was driving had pushed her stomach up into her throat, where it felt like a wad of swallowed bubblegum.

“Daddy, why are we ...” Her voice was pinched off by a sudden sharp turn that sent them squealing around a corner.

“Not now, Grace,” Daddy said a little irritably, keeping his eyes on the road. His graying red hair looked wilder than usual, crinkling away from his ears and forehead.

Beside her, Sissy sat peacefully sucking on a rope of red licorice. At five years old, she minded better than Grace, who was nearly ten and ought to Know Better. In her pink dotted-swiss sun dress and white Mary Janes, Sissy reminded Grace of a plump, ruffled cushion. Except a cushion didn’t whine and whimper the way Sissy did when Mother and Daddy weren’t around to see what a pain she could be.

“What a
sweet
child,” people were always saying about Sissy. No one ever said such things about Grace, with her perennially scabby knees and the look on her face of always wanting to know more than she was being told.

When Grace had once asked her mother why they couldn’t all move to Washington to live with Daddy, why they had to wait in case he didn’t get elected to another term. Mother had snapped, “You ask too many questions.”

According to Mother, it wasn’t exactly
polite
to ask so many questions.

Now Grace was silent as Daddy pulled up at the curb in front of a small, shabby yellow house tucked back behind some overgrown shrubs and low-hanging trees. She watched him as he threw open his door, turning to her only after he had one leg out.

“Look after your sister, hear? I won’t be long.” Daddy sounded out of breath as he stretched out his big red-knuckled hand to pat Grace’s knee.

Grace didn’t understand why they couldn’t come inside with him. At the office, Margaret always greeted them with a smile. Sometimes she had a package of lemon wafers hidden in a desk drawer, and she’d make a great show of letting Grace and Sissy each have one while pretending to keep it a secret from Daddy. Why wouldn’t Margaret want to see them now?

Grace wanted to say something about how scared and worried she felt. But she nodded and said, “Okay, Daddy.”

He’d called her that ever since she could remember, his good girl. But she wasn’t always good. And she seldom minded. It wasn’t that she didn’t
try.
It was just that she was so curious. When told to stay put, she couldn’t help poking her head around a doorway or tiptoeing to the top of the stairs to hear or see what it was the grownups wanted to shut her out of. Like the time Daddy objected because Mother’s sister, Selma, got married and Gemma and Charles weren’t invited to the wedding.

“Blessing is the deep
South,
Gene. You and your committee have done wonders as far as the Negroes are concerned, but you can’t expect things to change overnight.” Mother’s voice came drifting up the stairs of their Park Avenue prewar, where Grace sat crouched behind the carved newel post. “Of
course
I agree they should have been invited. They’ve been with our family since I was in diapers. But you know Mother. She would have had another stroke if I insisted.”

Daddy muttered something that sounded like Grandma’s having another stroke might not be such a bad idea as far as he was concerned. Then, as if to show Mother he hadn’t meant it, he said teasingly, “Cordelia, I sometimes think you married me just to shock your mother.” Grace had known then, by the rich, booming sound of his laughter as it swelled up and out like a great balloon, that he wasn’t blaming Mother for Grandma Clayborn’s stubbornness.

Now, as Grace watched her father’s broad, sloping back disappear up the shaded front path, she itched to run after him. She wondered what Margaret’s house was like inside. She’d never thought of her as being anywhere but behind the front desk in Daddy’s office, with its big black typewriter and neat stacks of papers.

She fished in the pocket of her jumper for her own red licorice. She wasn’t like Sissy, who gobbled up treats as if she were a fat little goldfish. She liked to save things for later. It was more fun that way, looking forward to something for hours, sometimes a whole day. But when she pulled out the licorice Daddy had given her this morning, she saw that it had gotten all sticky and was covered in little flecks of lint. She chewed on it anyway, mad at herself, and mad at Sissy, who was too young to know what was going on.

Grace rolled both front windows all the way down. “There,” she said, trying to sound the way Mother did when she meant for a subject to be closed, once and for all.

The sun beating in through the windshield made the shade-drenched trees alongside the house look like a cool creek daring Grace to roll up her pant legs and wade in.

Grace, hot and irritable herself, snapped, “You’re
not.
And if you don’t leave those shoes on, I’ll slap you.”

Sissy stopped trying to unbuckle her shoe and started to cry, a low aimless noise like a fly buzzing against a windowpane. Her licorice slipped out of her hand onto the hump in the floor, where it stuck in a fat, gooey squiggle.

Grace tried to wipe Sissy’s sticky hand with a crumpled Kleenex, but that only seemed to make it worse. Sissy’s round muffin of a face got all scrunched up, and tears rolled down her cheeks.

“I want Mommy!” she wailed.

“You mean Daddy,” Grace corrected her. “You want
Daddy.”

“Mother’s in New York,” Grace snapped. “Here”—she shoved her licorice at Sissy—“you can have mine.”

“I don’t want it!” Sissy threw it down on the seat.

Grace felt like crying herself. She itched all over from the heat, and wished she hadn’t snapped at Sissy, because now she wanted to take her shoes off as well. On top of everything else, she had to go to the bathroom.

“I’ll be right back,” she told Sissy. “Don’t move.” That was like telling a fish not to fly away, she thought. Sissy whined a lot, but she never
did
anything.

Walking up the front path, Grace forgot how annoyed she was at her sister and began feeling scared again. Sounds drifted toward her from inside the house—
bad
sounds. Shouting. A voice that sounded like Margaret’s, shrill, pleading. And a man’s, but not Daddy’s—it was husky and mean. Mr. Emory? Grace had never thought of the photo on Margaret’s desk, of a brown-faced man in some kind of uniform, as a real person.

In the Life by Blue, Will
Berlin Games by Guy Walters
Max Brand by The Garden of Eden
Roberto Bolano by Roberto Bolano
Academic Assassins by Clay McLeod Chapman
The Wild Hog Murders by Bill Crider
Courting His Royal Highness by Amy Hahn
Who Do I Lean On? by Neta Jackson
Bird of Paradise by Katie MacAlister
The Gladiator's Mistress (Champions of Rome) by Jennifer D. Bokal