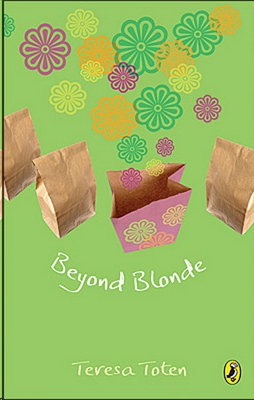 TERESA TOTEN is the author of
Better Than Blonde
and three other young adult novels, including
The Game
and
Me and the Blondes,
which were both shortlisted for the Governor General’s Award. Her most recent book is
Piece by Piece: Stories About Fitting into Canada.

Piece by Piece: Stories About Fitting into Canada

Me and the Blondes

All rights reserved. Without limiting the rights under copyright reserved above, no part of this publication may be reproduced, stored in or introduced into a retrieval system, or transmitted in any form or by any means (electronic, mechanical, photocopying, recording or otherwise), without the prior written permission of both the copyright owner and the above publisher of this book.

Publisher’s note: This book is a work of fiction. Names, characters, places and incidents either are the product of the author’s imagination or are used fictitiously, and any resemblance to actual persons living or dead, events, or locales is entirely coincidental.

In memory of Janja Vukovic Mama

Always tell the truth. Even if you have to make it up.

Mama turns on
the water in the bathtub, hoping it will drown out her crying. It never does. The condo walls are paper-thin, practically see-through.

My Euclid Avenue bedroom had gorgeous thick walls, but that was before prison. The condo is after. The Euclid room was awesome. I think. I
know
that the walls were awesome because Papa and I painted them electric orange one Sunday while he was in that sweet spot between four and seven shots of brandy. I can’t really nail down any of the other details. My orange room blurs into the five other bedrooms I’ve had since we’ve moved from there to here.

My condo bedroom is beige, bar none the most pathetic colour in the known universe. We’ve been here for almost three years, Mama, me, and, for a minute and a half, Papa, and it’s like my bedroom is still in its underwear. I plopped onto my mattress, which is on the floor, and stared at it all accusingly. At least I had this brilliant lava lamp that Auntie Eva gave me when I turned sixteen. The lamp’s bobbing purple
blobs float on top of a stack of
Encyclopaedia Britannica
s, A through P. We couldn’t afford the rest, or the Britannica people couldn’t keep up with our moves. I forget which. Given the room, the lamp looked like it was trying way too hard.

I knew how it felt.

I also had Papa’s mirror, the one he made me for my eighth birthday on Euclid Avenue. It had the best bits of my little-girl self glued, shellacked, and frozen onto its frame. I had a home then. I haven’t called any of the places “home” since then. But that was
then.
Now, Papa’s gone again, and Mama’s relapsed right back into her Papa in Prison behaviour. She’s either all over me or spending entire weekends in her room, crying as quietly as she can. She just hit hour three of smothered sobbing. I lay down. Jesus God even the ceiling was beige! I never noticed that before. Isn’t there some kind of decorating law that ceilings have to be white?

He’ll come back when he’s sober. He said. He packed up his shirts, his poetry books, some of my art, and all of his laughter. Papa packed up his making me feel like his princess, and he left.

His drinking, his leaving, their “separation,” her crying— none of it was my fault. I know that. I’ve seen all the Afterschool Specials. But there must have been at least some little thing that I could have, should have, done but did not do. My head is swirling with free-floating crappy bits.

I need something. I need a thing to help fill up the hole inside me, or at least to muffle the echo a bit, not a booze thing or a dope thing, or even a guy thing … but a
some
thing. For sure, I need a
something
.

On the bright side, I don’t have any secrets left.

Unless you count the ones you keep from yourself.

The Blondes still have enough secrets to sink a ship. Sure, Madison came clean about her adoption, but she’s still passing off her loony grandma as a former housekeeper. Sarah insists that she’s a born-again virgin, but she’s straining under the weight of all that purity. And then there’s Kit, who swore seven ways from Sunday that she’s done with the puking. Kit’s got a therapist and a plan, and she says that she’s sticking to both. Maybe, but I can smell a secret from a thousand paces, and you can bottle the scent coming off her.

Not off me though. Like I said, I am secretless.

I am now the holder of
their
secrets, but they are not
my
secrets. Papa in prison was a secret, a big one. Luke and I were a secret, almost as big, maybe bigger. No more. My first love was, as of last February, officially married
and
a brand-new daddy. So, we’re dead, done, finished, over. When I lie now, it’s for the Blondes, not for me. That kind of lying doesn’t even count as lying. It’s more like community service.

I exhale, get up, and shut the door on Mama.

We were about
as inconspicuous as a three-ring circus in a monastery.

“I vas never no how pushing!”

Mama of all people should have known better. The Aunties were unshakably unshushable. Yes, they adored her, and maybe they were even a little afraid of her, but
nobody
shushes the Aunties. It didn’t matter that they had, hand to heart, agreed to Mama’s game plan in the parking lot a cool three minutes ago. “Vatever happens …” Mama made eye contact with each one of them. “Vonce ve are in da Anonymous Alcohol meeting …” They nodded with an enthusiasm that made their
beehive hairdos lurch. “Ve must to be totally, completely, inconspicuous,
da
?”

For one thing, we had just not so inconspicuously exited Luigi’s White Night limousine, a gleaming white super stretch that was tricked out in twinkle lights. You could see that thing from the moon. Luigi was still trying to manoeuvre it out of the parking lot as we clambered down the steps to the church basement. Luigi Pescatore was Auntie Eva’s latest and most enthusiastic beau. They met last year when we used his limo service for Auntie Luba’s monster wedding to Mike. The moment that Luigi set eyes on Auntie Eva in her one-of-a-kind “kinda couture” bridesmaid’s dress, he was gunning to be husband number five. As of last Friday, Auntie Eva had rather grudgingly agreed to put him out of his misery. It was a slick compromise. They were officially unofficially engaged. Jewellery was involved, but the date was murky.

The other not-so-inconspicuous thing is that we arrived in a clump. All the other alcoholics were filing in by themselves or, on occasion, meeting someone outside and then coming in. Auntie Eva picked an AA meeting in Rosedale because she insisted that we’d get a better class of drunk here. And, so far,
she was right. All the alcoholics were pressed, groomed, or, at the very least, clean.

Still, none of them looked like they were going to the El Mocambo circa 1962, which was standard Auntie streetwear. Mama was the muted one in a bright Pepto-Bismol pink “almost Chanel” suit that she saved for closing real estate deals. The Aunties never went anywhere without full armour: hair teased and sprayed, makeup blazing, girdles girdling, and billowing silk outfits meant to dazzle, if not blind, all potential opponents.

Mama made me iron my jeans. Shuffling around with pressed bell-bottoms only added to my escalating anxiety about being here in the first place. I had this vague but persistent feeling that AA was a seriously secret society. What if they could tell I was an impostor? They probably had a deeply humiliating throw-the-fraud-out ritual that involved strobe lights and sirens. I felt terrible that I didn’t have a drinking problem. Auntie Eva assured us that even “sober peoples vas velcome to za Open Meetings,” but given the source, I didn’t believe it for a minute.

A Touch of the Grape: A Hemlock Falls Mystery (Hemlock Falls Mystery series) by Bishop, Claudia
Is This The Real Life? by Mark Blake
Rottweiler Rescue by O'Connell, Ellen
Tender is the Night by F. Scott Fitzgerald
The Wild Girl by Jim Fergus
Frontier Inferno by Kate Richards
The Footballer's Wife by Kerry Katona
Scattered Bones by Maggie Siggins
The Maverick Experiment by Drew Berquist
Shelly's Second Chance (The Wish Granters, Book One) by Gschwandtner, L B