Read Between Light and Dark Online

Between Light and Dark 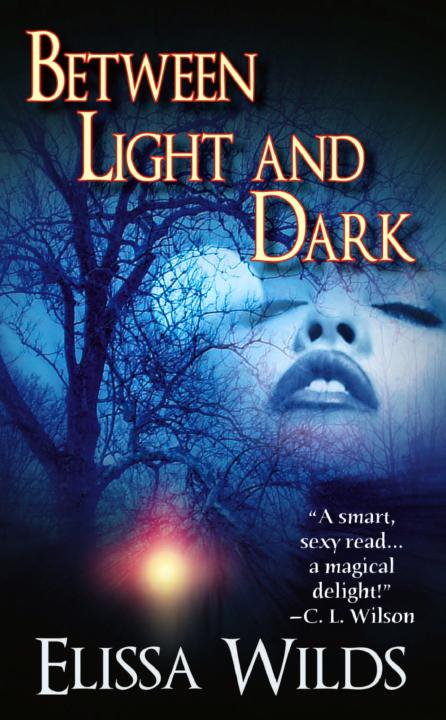 "Elissa Wilds has created a sizzling story line to entertain
and challenge her readers and does not disappoint. Sexy
characters and tense plotting makes for a read that is fun,
fascinating and unforgettable."

The kidnapper turned to face her. He still carried that
same tenseness in his bearing, as though he held something within him barely in check.

His irises turned a deep gray, almost black, swallowing
his pupils until they disappeared like pebbles dropped into
a lake. A shot of silver shone through them, almost opaline. She stared into his eyes, heart raging in her chest.

"Who are you?" she whispered past the lump in her
throat, both hopeful and fearful he would answer the
question this time.

Laurell swallowed hard. The man had clearly lost his
mind.

For Mom. You always said I could do anything I set my mind to.
You were, as usual, right.

This title was previously published by Dorchester Publishing; this version
has been reproduced from the Dorchester book archive files.

I'd like to thank my editor, Alicia Condon, for sharing my
vision, and being such a pleasure to work with. I'd also
like to thank my agent, Michelle Grajkowski, for being so
enthusiastic about my work and so darn patient with me.
Thanks to my wonderful critique partners in crime, June
Bowen, Cheryl Mansfield, and especially jean Mason, who
jumped in at the eleventh hour and made sure my i's were
dotted and my is were crossed. Special thanks to Cheryl
Wilson for your encouragement and friendship. And to Julie Leto and Diana Peterfreund for your willingness to lend
an ear or advice when I really needed it most.

Certain people have been my cheering section during my
journey to publication and deserve recognition for their love
and support: Jeffrey Gordon, Diane Stein, Nanci Clifford,
Trudy Leone, Nickole Grams-Deleon, Amanda Wright,
Adrienne Russo, Jami Lin, Debra Glass, The Witchcrafters, As Always, and the women and men of Tampa Area
Romance Authors. May your good karma increase tenfold!
And thanks to Tristyn and Selena who are endlessly excited
about my writing and always willing to give me quiet time
when I tell them I need to work on my books. Last, but
not least, I'd like to express my gratitude to Donna Jeanne
Guerra for opening my eyes to the magic in life nearly fourteen years ago and ensuring that I'd never look at the world
the same again.

axiom: (z) A self-evident truth that requires no proof. (2)
A universally accepted principle or rule. (3) A proposition
in logic or mathematics that is assumed without proof for
the sake of studying the consequences that follow from it.

Rage, rage against the dying oft he light.

Meeting of the Divine Council

You would expect beings as powerful and wise as gods to see the
foolishness of discrimination, but even gods can be blind to such
evil when it suits them. Mobius sat at the head of the oblong
table surrounded by gods of varying levels of wisdom and
foolishness, and shook his head at this thought. His jaw set
as he scanned the room to rest briefly on each of the
white-robed deities surrounding the table. He knew many
would disagree with his recommendation. It could not be
avoided.

The rest of the thirteen members of the Divine Council
eyed him with interest, clearly eager to get on with the
vote.

Mobius's deep baritone broke the silence. "This will be a
difficult decision for all of us to make, but I believe we have
at our disposal an appropriate candidate. I have every faith
he would serve us well."

The goddess Willow nodded. Her golden hair shimmered under the soft light and brightened the otherwise
stark white meeting room of the Divine Council, kept purposely barren to prevent distraction from the serious work
done there. She stepped closer to Mobius, white robe swish ing over the sparkling quartz-crystal floor, and her signature
scent of verdant soil and spring rain followed.