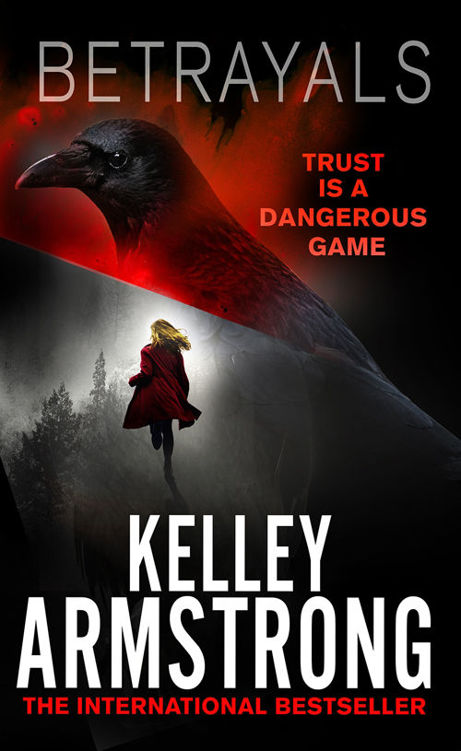 Women of the Otherworld

Living with the Dead

City of the Lost

Men of the Otherworld

Tales of the Otherworld

Made To Be Broken

The Hounds of Hell

Spokes on a Wheel

I
woke to the sound of horses. It took a moment for me to remember where I was—in the forest behind the Saints’ clubhouse. I’d gone for a walk with Ricky which had turned into a chase that turned into victory sex and an exhausted drop into sleep on the forest floor.

I reached for him. When my fingers thumped down on cold earth, I scrambled up. “Ricky?”

He wouldn’t have wandered off. That was our pact after the last time I woke up alone in these woods, when Ricky had been lured away and nearly killed.

As I yanked on my clothing, a hound’s baying cut through the night. I spun and caught a flicker of distant fire.

A scream sounded deep in the forest. A man’s scream. I yanked my switchblade from my pocket and—

Ricky’s groggy voice. Then his hand on my calf, and I looked down to see him on the ground where we’d been sleeping.

“You weren’t there,” I said, and he knew exactly what I meant, rising with a curse as he reached for his jeans.

When a low growl reverberated through the air, I strained but saw nothing.

One glance at Ricky’s face told me he hadn’t heard anything.

“I heard a man scream,” I said. “And now growling. There was baying earlier. It think it’s one of the—”

A snarl. Then another cry, and I turned fast, catching a glint of red eyes and the faint outline of a giant black dog.

Something crashed through undergrowth, running away, but I blocked it out, squeezed my eyes shut, and focused. “Ricky.”

“Here.” Warm fingers clasped mine. “Hold hands for safety. Just like in kindergarten.”

I told him what I was seeing and hearing. Pinpointing the source was impossible—it would come from the north, then the southeast, then the west.

“I think someone’s been cornered by the hound,” I said.

“I’m still here,” he said. “Oh, and when we went out for lunch yesterday, you said your brownie tasted like it’d been dredged in sawdust, so I dropped off one from Uppercrust for your afternoon break.”

He was proving it was really him I was talking to. “Thanks.”

“Covering all the bases. Was the brownie good?”

“And the dude being menaced by the giant hell-hound?”

“Huh. Do you want to go grab another brownie?”

“Is that a challenge? I can find—”

His voice faded, and his figure shimmered against a backdrop of rubble.

There was no rubble in this forest.

I could still feel his hand, though, so I gripped it tighter, and his figure came clear again.

“Did I go somewhere?” he asked.

“Huh.” He peered out into the night. As I looked around, he said, “Still nothing?”

I shook my head.

“We know it’s not the actual Hunt. I’d hear it if it was.” Ricky had Cŵn Annwn blood himself and recognized the sound of them. “It’s a vision, which means you have a message pending. So do you want to get it? Or leave it on vision-mail for a while?”

When I didn’t respond, he said, “I’d rather you got it. I know the fevers are easing off, but I still don’t like you having visions when you’re alone.”

“In other words, just get it over with.”

“Take it slow. Keep hold of my hand. If you can’t hear my voice, come back. And if you can talk, tell me what’s going on so I know everything’s okay.”

I nodded. Then I stared out into the forest, picturing what I’d seen a few minutes ago—rubble amidst the trees, nature reclaiming a human encroachment. Like the abandoned psych hospital. Like Villa Tuscana. Two other places where I’d seen fae visions. Ruined places, rich with fae energy, stolen by humans then falling to rubble, Nature slowly reclaiming what was hers, restoring balance.

When I heard a childish giggle, I turned, expecting to see the little girl who was so often my guide in the visions.

A laugh answered. Still girlish, but different from the first. I looked around. Piles of brick and stone and crushed mortar littered ground already blanketed in moss and vines. When I turned toward Ricky, I could see him faintly and feel the pressure of his hand. I told him what I saw as I led him toward that girlish laughter.

“Pou eísai?” a girl said, and though I didn’t recognize the words, I knew they meant
Where are you?

The other girl answered in the same language, telling her companion that the point of the game was to
find
her. The first girl let out a victory laugh, hearing her target, who shrieked as she realized she’d given herself away.

I stepped around a half-crumbled wall and saw a campsite—sleeping bags and backpacks—tucked into what remained of a room, the roof mostly intact. When I came closer, I saw more bags. Not a camp but a squat for the homeless.

The girls laughed again. One darted past. She was in her late teens, older than I expected, given the games and the giggling. Another girl zoomed from a hiding place. She launched herself at the first, and they fell, tumbling together and laughing.

Then they went still. Absolutely, unnaturally still. That youthful joy vanished in a blink, and when I looked into their faces, I saw two other girls—prostitutes—sitting on a bench. I’d spotted them six months ago while searching for an apartment. When they’d looked at me, I’d seen that emptiness in their gaze.

These were the same girls, recognizable now only as they presented that soulless gaze to the world. Then that disappeared, and the girls looked normal, though still solemn, their eyes dark with worry and concern.

“He’s found us,” the second one said in that foreign tongue.

The first girl made a noise in her throat, an odd rattle, as her sharp gaze darted about. “Go warn the others,” she whispered.

The second one shook her head vehemently. “I won’t leave—”

The first girl spun and grabbed her by the throat, and when she spoke, her words came carried on a hiss. “I said go.” She gave the second one a shove.

Still the girl hesitated, but her companion stomped in her direction with an urgent “Go!” and she took off through the trees. The first one watched her and whispered, “Be safe, little sister.” Then she turned and, once again, her gaze emptied. She took a step toward the forest.

“I know you’re there,” she said, speaking English now. “I have what you want.” Her voice took on a coy lilt. “I have everything you want. You need only come and take it.”

She stepped toward the forest, her hips swaying, and when my gaze lowered to those hips, I saw her belt. Snakeskin, like she’d been wearing the last time.

I stopped to listen and—

A scream. A horrible scream.

Like those of the fae. The dying fae on the grounds of Villa Tuscana.

Dragging Ricky, I ran toward the sound. I heard a hiss. I caught a glint of scale and of fang. A man howled. Then he cursed. That scream came again from all around me, and I spun, but there was nothing to see, nothing more to hear, just that terrible scream.

I kept walking, kept listening. Breathing. A soft scrape. A grunt. The whisper of fabric. The smell of blood.

My hand tightened on Ricky’s. A single moonbeam swept the clearing, like a peephole into another world, and I spotted
a foot. The girl’s foot. Bare. Her toenails painted red. The beam moved over her supine body. Her leg. Her snakeskin belt. Then her torso, her shirt pushed up, stomach painted as red as her nails, a slash of crimson that split her belly in two. A hand reached into her stomach, and I fell back as the moonbeam moved up a man’s bloodstained arm. I could see the girl, dead on the ground, but I focused on him, as that light passed over his shoulder, to his head, fixed on the girl. Then he turned, and I saw the face of a man maybe thirty, fair-haired and bearded.