Tags: #lisa renee jones, #being me, #hot secrets, #dangerous secrets, #if i were you, #revealing us 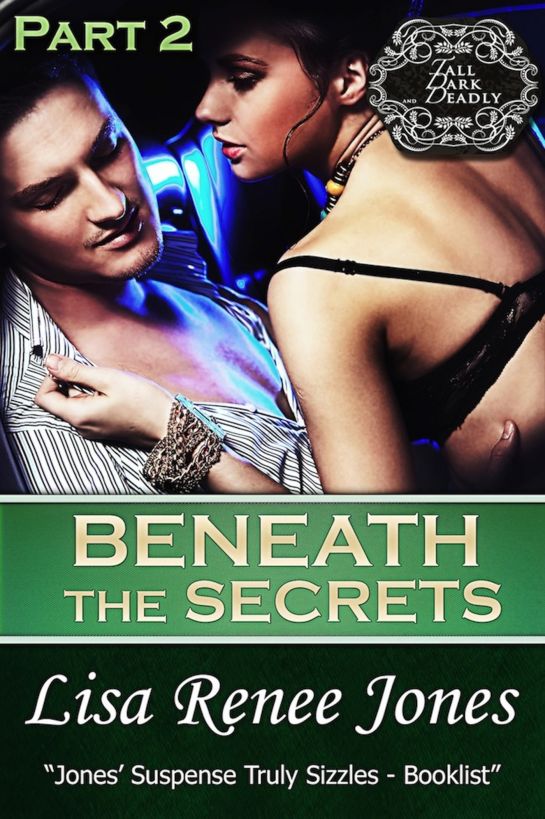 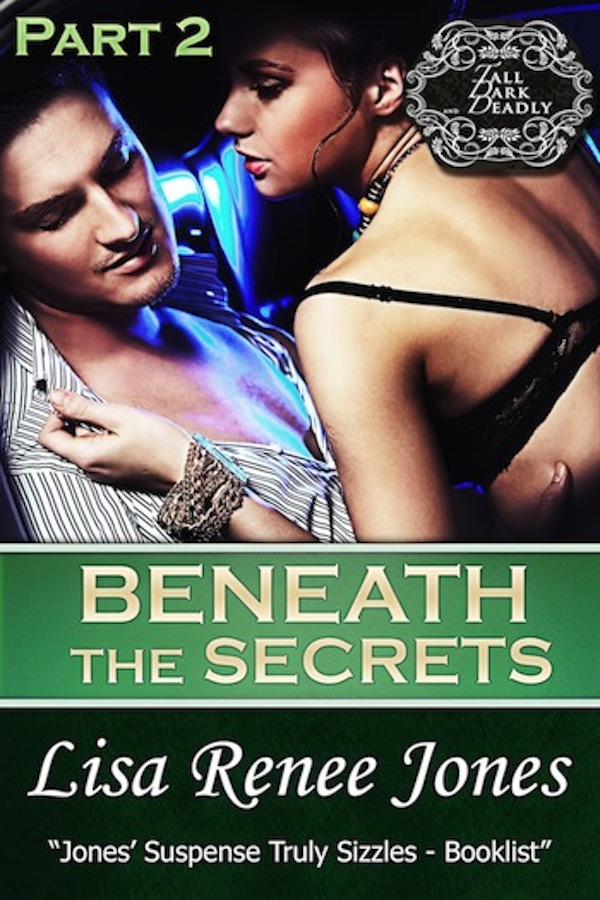 Part of the Tall, Dark, and
Deadly Series

Books in the
series:

Beneath the Secrets Part
2

Beneath the Secrets Part
3

Beneath the Secrets Part
4

This ebook is licensed for
your personal enjoyment only. This ebook may not be re-sold or
given away to other people. If you would like to share this book
with another person, please purchase an additional copy for each
person. If you’re reading this book and did not purchase it, or it
was not purchased for your use only, then please return to the
supplier and purchase your own copy. Thank you for respecting the
hard work of this author. To obtain permission to excerpt portions
of the text, please contact the author at
[email protected]

All characters in this book
are fiction and figments of the author’s imagination.
www.lisareneejones.com

“She’s with me and if you don’t
drop the gun, I’ll take you to visit my pops.”

Relief washed over Kara at the
sound of Blake’s voice and the sight of him holding a gun on
Ignacio, though she had no idea what the heck he meant by visiting
his “pops”. Maybe it was some sort of slang term Ignacio understood
but, truly, she didn’t care. Only seconds before she’d thought she
was dead, about to be shot to death in a dark corner, squatting
behind a brick wall. Turned out the retail strip she’d thought a
perfect spot to spy on the pier, where the Alvarez Cartel shipped
off insane amounts of illicit drugs under Ignacio’s supervision
wasn’t so perfect at all.

“Your pops?” Ignacio snapped. “What
the hell does that mean?”

Okay, so apparently Ignacio didn’t
understand Blake’s slang either, but it was distracting him from
firing the gun so it worked for her. Kara used the opportunity to
ease her hand inside her purse, and close it around the base of her
Glock.

“Pops,” Blake said with a snort.
“My father. The man who donated sperm to birth me so I could hold
this gun I’m pointing at your head. Comprende?”

Ignacio chuckled, but it sounded
strained. He wasn’t amused at Blake’s arrogant, nonchalant
smart-ass remarks. Kara was, or she would be if Ignacio wasn’t
still pointing the damn gun at her. “So our new head of security
needs his father to do his dirty work?” Ignacio asked.

Blake shrugged. “What can I say? My
pops gets pretty lonely. I hear being dead does that to a guy,
though. Would you like to find out for yourself?”

Despite her obviously dire
situation, Kara had to choke back laughter that would surely get
her a bullet in the head. Oh my God, Blake was crazy and she loved
it.

“Do you know who I am?” Ignacio
challenged indignantly. He was all about being the boss man’s
nephew, but didn’t seem to mind stealing from the drug shipments
behind his uncle’s back. Of course, he didn’t know they knew that
yet.

Kara’s lips twitched. Oh yes. Blake
was a piece of work all right. It was almost like he was daring
Ignacio to shoot him. Oh God. Her stomach knotted with realization.
Blake
did
want
Ignacio to try and shoot him. He was taunting Ignacio into turning
the gun on him. Blake was risking his own life for her; a man she
was sure would kill her if he knew the truth of who she was and
what she was after. Could she get any more confused or conflicted
over this man than she was now? Because damn it, she knew he was
aligned with the cartel and was easily someone who would kill her
if he knew her secret, but still, she couldn’t bear the idea of him
dying to protect her.

The cold steel of her weapon
comforted her only slightly, considering she couldn’t see Ignacio’s
face through the drape of his long, dark hair to gauge his
reaction. The barely lit corridor of the building they were in
front of didn’t help either, nor did the late hour, but she didn’t
miss the way his shoulders bunched and his spine stiffened before
he added, “My uncle—”

“Won’t care if I kill you,” Blake
assured him. “Not if I give him a good reason for doing it. And I’m
real damn good at justifying why I kill people. Put the gun away,
or I’ll prove just how good. Of course, you won’t be around to be
impressed, but I’m sure your replacement will be.”

“Not until you explain how our
meeting ended twenty minutes ago and you’re still here.”

“The devil is in the details, man,”
Blake replied, “and I intend to know them all. Consider me the
devil in your uncle’s pocket. I want to know everything you do and
not just what you say you do.”

“Mendez is my uncle,” Ignacio all
but growled. “Check up on someone else.”

“He wants me to check up on
everyone. You included.”

Ignacio stared at Blake. Blake
stared at Ignacio. Tension laced the air, thick like quicksand
about to swallow them whole. Kara was pretty sure she could feel
herself sinking now. Her fingers flexed on her gun, her body tense
and ready for action, all too aware that all Ignacio had to do was
move his finger and she was dead. Her only comfort was the
knowledge that Ignacio knew Blake could kill him just as
easily.

Finally, Ignacio moved, holstering
his weapon under his leather coat. “You want to see my operation,
you ask.”

“Why would I do that?” Blake
challenged, letting his gun drop to his side and reaching for
Kara’s hand to pull her to her feet by his side. Protective.
Possessive. It was getting harder and harder to remember he was the
enemy.

“Because I said,” Ignacio
growled.

“You got something to hide?” Blake
asked.

Kara discreetly stuffed the
binoculars she was holding inside her purse; afraid the sight of
them would only bring attention to her spying and ignite more
trouble.

Ignacio glared at Blake. “Most of
my men won’t ask questions before they shoot.”

Blake arched a brow and holstered
his gun under his jacket as Ignacio had done. “Sounds like a good
way to draw unnecessary attention to the operation. I’m not sure
that’s what your uncle has in mind.”

“You’re good at justifying why you
kill someone,” Ignacio said. “I’m good at making bodies
disappear.”

Ignacio scowled. “What does that
mean?”

Blake shrugged. “Just taking in the
details, man. Finding out who is who in this operation.”

Ignacio bristled, clearly not
liking that response, and without warning, his gaze snapped to
Kara. “Why are you here?”

Kara opened her mouth to reply, but
Blake beat her to the punch. “She’s here because I want her to be.”
He wrapped his arm around her shoulders and pulled her under his
arm, sending heat darting through her body.

“And how does my uncle feel about
you
wanting
his
secretary?”

“Your uncle is pleased to give me
whatever resources I need to ensure his operation is without
problems,” Blake assured him.

“So he loaned you his
secretary?”

“I wanted her,” Blake stated
flatly. “I generally get what I want.”

Kara tried to hide the tension
coiling in her spine at the obvious declaration that she was now
Blake’s woman and his property, but she knew his motivation. The
men in this world didn’t kill each other’s women. It was like some
unwritten code of honor, when they had so little anywhere else.
Blake was trying to protect her, but that didn’t make it easier to
play the role of his bedroom bunny.

Ignacio’s gaze raked over Kara, hot
and sticky like a summer day you wanted to escape but couldn’t,
before he cut Blake a look. “I hope she’s as eager to please as my
uncle is to punish those who cross him.”

“Punishment is underrated,” Blake
said dryly. “I guess that’s why your uncle hired me. I get what he
wants. And, on that note, I’ll be getting back to work.” He drew
Kara’s hand into his and started to walk away, pulling her with
him.

“Wait,” Ignacio called, halting
them in their footsteps.

Blake turned back to him, casting
him an expectant look.

“We’ve gotten off on the wrong
foot,” Ignacio said. “Why don’t I buy you a drink?”

Blake turned back to him and Kara
did the same. “It’s a little late for a drink, don’t you
think?”

“Welcome to my world, where we
sleep in the daylight and make the most of the night.”

“Twenty-four hours,” he said. “It
keeps the activity looking honest.”

“All right then,” Blake said. “A
drink at one of the restaurants works for me. I’d like to see how
they operate.”

Ignacio’s gaze flicked back to Kara
and she saw the suspicion in his stare, the hate. “Will she be
joining us?” he asked, as if she wasn’t even there when he was
looking right at her.

“Excellent,” he commented. “Always
happy to buy a pretty lady a drink.”

Oh yes, Kara thought. He was ready
to buy her a drink all right, and then find a creative way to drown
her in it. He’d decided she was a problem and he’d stay away from
her for now, but later, if he had the chance, he’d smash her like a
fly. But he wouldn’t get the chance, she reminded herself. She’d
smash Ignacio long before he smashed her, if Blake didn’t beat her
to the punch. She had a feeling he just might.

Taking His Hand (Under His Roof #2) by Quinn, Sadey
The Fellowship of the Talisman by Clifford D. Simak
Life's a Beach by Jamie K. Schmidt
Surrender by Serena Grey
Confluence Point by Mark G Brewer
Vulnerable by Elise Pehrson
Blind by Francine Pascal
Seductive Wager by Greenwood, Leigh
The Naked Detective by Vivi Andrews
My Side of the Mountain by Jean Craighead George