Read Behind the Fire: A Dark Thriller Online

Behind the Fire: A Dark Thriller 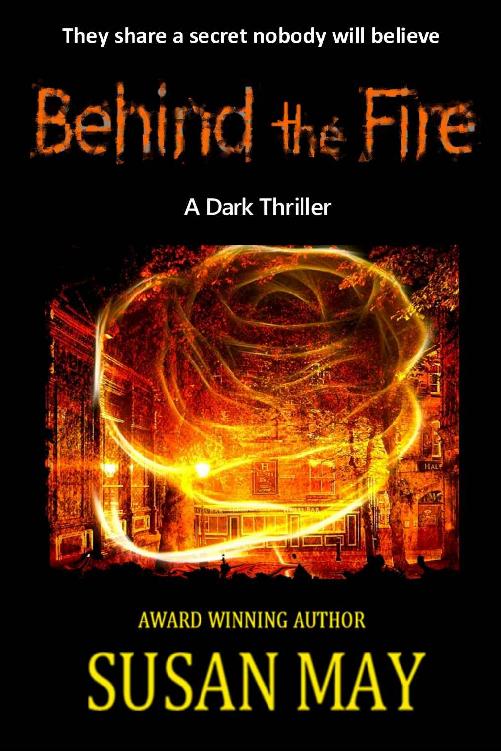 If you love Susan May's stories

To my hero, my husband Franco, for encouraging me to follow my heart and to never doubt I had it in me.

ABOUT BEHIND THE FIRE

Emily and Bobby Jessup stand accused of first-degree arson. Their small coal-mining community of Karlgarin has branded them criminals and sociopaths; some even call them insane monsters.

Something had led Bobby and Emily to leave their two young children with a sitter while they embarked on a firebug spree spanning many months. That something was a secret they’d promised to protect—even if it meant lying under oath.

While under cross-examination, Emily impulsively breaks that promise, and a bizarre tale begins to unfold of the night she followed Bobby and discovered his terrible secret.

Behind the Fire
is an extraordinary story of the random appearance of strange, shimmering black holes, frightening “black things,” and one couple’s battle to protect their town from these desperate and dangerous creatures.

Is this a tale of insanity or great heroism? You won’t know until the very last page.

“Bobby, this is insanity,” she’d said to her husband more than once.

Bobby was on the stand patiently answering the questions flung at him by the prosecution attorney. His testimony was not the truth, but it was the version they’d agreed to tell. He stared straight ahead at a spot at the back of the courtroom, focused, steady.

In the beginning, when she’d discovered his secret, she thought he needed help. Maybe a psychiatrist or little pills washed down with water. In the end, what she’d discovered couldn’t be solved by simple therapy. She’d come to understand more frightening things exist in the world than losing your mind. Eventually it all made sense—terrifying sense. Today it would end.

Emily’s attorney pressed firmly on her arm, leaning in to whisper through minty fresh breath.

Emily turned to look at the woman. The attorney thought she knew it all, so confident in her secure world, wearing her precisely pressed blue suit and pursing her bright pink lips, the fine smoker’s lines above her mouth creased in perfect symmetry.
Miss Pink-and-Prissy.

Emily thought,
I could tell you, but…
and then Jack Nicholson’s famous line flashed in her mind,
“You can’t handle the truth.”

Instead she replied, “He’s smiling because none of this will matter if we can’t finish what we’ve started.”

Miss Prissy sighed and leaned back into her chair, skimming her hand from her forehead to the back of her skull as though trying to push her hair clean off her scalp. Her hand came to rest on her perfectly groomed blond ponytail, which she flicked forward.

Then she shook her head. “We discussed this, Emily. If you keep saying things like that; if you and Bobby do not accept responsibility for your actions, then the court will not be lenient.”

Emily turned from her words. The woman was so irritating. She looked at Bobby. He was smiling, the damn fool. Who could blame him? It was a mockery they were here. They had already paid a heavy price. Their lives—or what was left of them—forever changed.

Every time they faced the “black things,” they’d risked everything. No one had listened since they’d been caught. Their words, their warnings were like broken glass on a walkway, stepped over, shunned, and avoided.

It wasn’t their fault if it all went to hell. You can’t blame glass for shattering into shards. So why blame them?

Their life was normal before those things, before Bobby took it upon himself to save the whole goddamn world. Bless the fool. He didn’t go look for this mountain of a job.

Least it’d be over soon. “It won’t be long,” Bobby had said when they’d been caught. “Maybe even before this trial is over.”

With any luck,
before
this trial was over.

Just yesterday, Bobby had said to her, “Em, we needn’t be ashamed.”

He was the only one who called her Em. Her name was Emily.

“Too many syllables for such a little thing,” he’d said on their first date fifteen years ago.

She wasn’t Emily after she met him. That nervous mouse, she left behind. He transformed her as much as her childhood had left its mark. Her father had taught her more than a child needs to know.

In one date, Bobby did more to fill the void created by her memories than a lifetime of therapy ever could.

Yesterday they’d climbed the steps of the courthouse, Bobby’s arms protectively cradling her body, as their attorneys guided them toward the entrance. A horde of reporters’ flashes erupted, stinging her eyes.

“Why’d you do it?” a reporter’s voice called.

Another from the crowd: “Lunatics.”

Then a woman’s voice, “What about your children?”

The words slapped her. Damn fools. They’d done it for the children. The children deserved a future.

She turned toward the reporter holding a mic in her outstretched hand—Miss Universe with a brown bob. Emily opened her mouth to let her have it. Really tell her. Then she felt the squeeze of Bobby’s arm around her shoulders.

“Em, don’t answer. Nothing to be ashamed. We did our best.”

The words sunk in like water soaking a sponge.

“We followed our hearts. We’re human.” His breath and words brushed across her face, and the burn to defend them subsided.

She gripped his hand, the only solid thing in the world preventing her from falling into the swirling chasm of doubt she’d felt from the moment she’d discovered the truth. If they failed and the end came, it was his hand she wanted to hold.

Right now, twenty feet of courtroom separated their hands and, in-between, the attorney for the state prosecution, James Hoffman—Mr. Smarty Pants, with his slicked-back hair and perfectly knotted red tie.

He talked and paced, paced and talked before the judge and jury like some kind of rock star. Emily was reminded of those ducks in the shooting booths at the fair, except hitting him didn’t win you a stuffed bear.

“Can you please explain your actions to the court, Mr. Jessup?”

He said it like he wanted to laugh, like what they’d done was some kind of joke instead of something more important than him and the judge and all the people in this town put together.

What did her precious Bobby say in answer to the prosecutor’s ridicule?

Nothing. He just sat there still and calm staring at the attorney, his gray jacket pulled about him; the jacket that didn’t fit him anymore now he’d lost so much weight. He’d just turned thirty-eight but he wore what looked like sixty years on his face; the lines on his forehead were etched deeply and his eyes had lost their youthful sparkle. What a difference six months makes when those six months are spent in hell.

Bobby looked down at his lap for the longest time. She saw the tightening of his lips, the hunching of his shoulders, the weight of the future and the past so heavy on him, and she saw what was coming next.

He was going to tell them.

As the realization dawned, she slowly shook her head. She mouthed “no.” They’d agreed. No point trying to tell them. They’d tried the truth. In the end, it was a waste of time. Time was precious now. So little left to do what needed doing.

Bobby looked up at the prosecutor, and then glanced at Emily. She continued to shake her head. He nodded knowingly.

“I don’t have an answer for you,” he finally said. “Maybe …” He hesitated like he didn’t want to say it, like it physically hurt him to speak. “Maybe it’s the drinking. Maybe I got an alcohol problem.”

It was their fabricated story. Emily could see the pain move across his face as he began the lie. Well, half a lie since he was leaning toward a drinking problem before. He hadn’t touched the stuff since this started.

The kids needed them when they were home. What would happen to their precious babies if their plan didn’t work? Timothy, only four, and Casey, two-and-a-half, did not deserve the future handed to them if their parents failed.

If not for the kids, they may have walked away when everything began. But who wouldn’t fight to save their children? Mr. Smarty Pants needed to ask himself
that
question.

When Bobby realized what he was up against, his only thought was of Emily and the kids. He’d told her that when she’d caught him … no,
caught
was the wrong word … when she’d
blundered
blindly into his secret.

In the tangled days after she’d followed him, and made her discovery, she’d questioned her own sanity. It was a secret she feared learning. It was a secret he feared sharing. It was a trap of darkness and despair and a hole so deep they both knew they likely weren’t coming out of it alive—or sane. Just like they weren’t getting out of here with a “not guilty.”

The prosecutor angled his questions at Bobby like he was spearing a fish. The verdict would be “Guilty” their attorneys had warned. There was no defense. Their only hope, they were advised, was to make full admissions and look sorry. Look at the judge and say the exact words, “I am sorry. We regret our crimes.”

Not as much as we would have regretted not trying
, thought Emily. The disaster clock was ticking down, and it was five minutes before “too late.” For all they knew, it was half-past after “late.”

Bobby was coming down from the stand. He shuffled toward his attorney’s table with his head bowed. They had separate attorneys. Bobby was the one the prosecution was after. She’d simply driven him around.

A feeling of suffocation crept through her. Instinctively, her hand moved to rub her neck, to push the feeling back down before it reached the part of her mind that would panic, the part that wanted to scream.