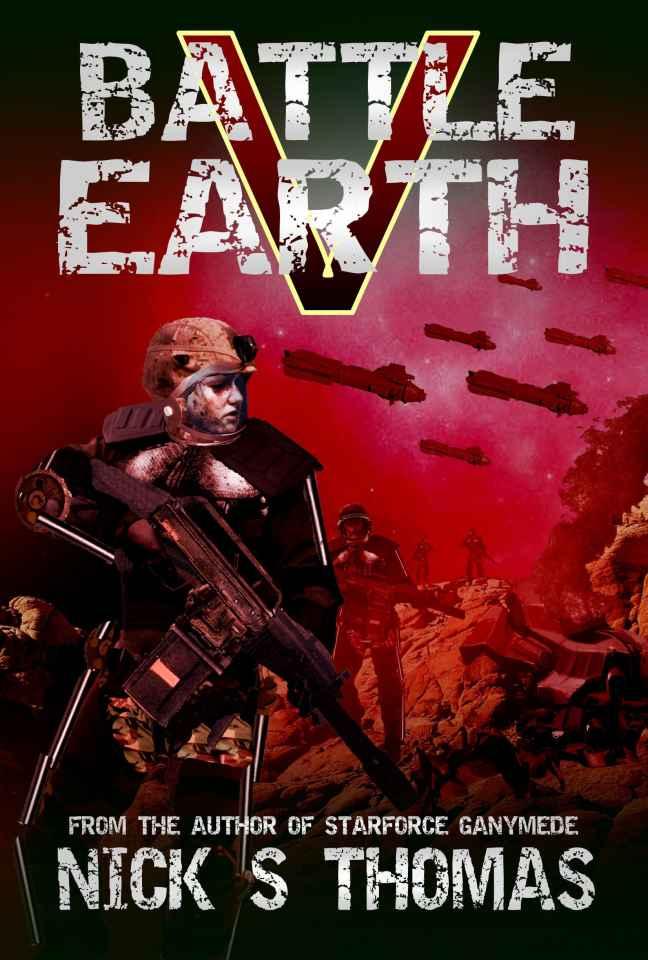 This is a work of fiction. Names, characters, places, brands, media, and incidents are either the product of the author's imagination or are used fictitiously.

Alien forces had taken Mars, occupied and defeated the Moon forces, but they could not defeat Earth. A bloody year long war had driven them off the planet and Earth forces had been quick to re-take the Moon and all that was theirs.

The alien threat was gone. The only known living creatures were signed up soldiers in Colonel Chandra’s Inter-Allied Battalion. Tartaros, the enemy mother ship, had seemingly vanished from the Solar System. Peace had returned.

Despite the relief of the humans, the knowledge that a fearful enemy still loomed out there in the depths of space weighed heavily on all their hearts. There was not one among the population of Earth that did not want to believe the war was over.

Could it really be true?

Troops rushed past Colonel Chandra with sweat pouring down their uniforms. Summer was fast approaching, and the horrors of war seemed a distant memory. The narrow footbridge she was stood on shook violently as the remainder of her Battalion trundled onwards.

Jones approached at the head of his Company and stopped to take a breather as he gestured for the others to continue. He could see she was as sweat covered and exhausted as the rest of them, and yet she persisted and did everything to show no sign of fatigue.

“The heat too much for you, Captain?” she asked.

“Damn right. Don’t you think we’ve all had enough for one day? They’ve all been waiting for the war to be over for so long, yet here we still are at the grindstone.”

“This is our job, remember. We can’t afford to go slack just because we have seen success. Follow me.”

Jones sighed from both his exhaustion and the Colonel’s seemingly unending energy. They tacked on to the side of his Company and followed on several hundred metres to the end of the course. At the end of the route, they found hundreds of weary faces and troops panting to get their breath. The last few of the half strength Battalion were making their way in.

Several of the troops who had sat down staggered to their feet. Within a few seconds, all had arrived and stood in silence in a circle around Chandra. At her feet were several Assegais, the close combat tool that Reiter has provided. Jones shook his head in disbelief, as he could already see what was coming.

“The last war taught us that we must be prepared and able to fight at all distances. The ability to effectively wield the Assegai is something we are all new to, but we must master it quickly!”

Blinker yawned loudly as she finished.

“Am I keeping you up, Private?”

Monty stood beside him and smirked at the grilling his brother was about to receive.

“Step forward, Private. You too, Corporal!”

The two of them sighed but obliged.

They wore full packs and had to carry their Reiter rifles without the exoskeleton suits the scientist had developed. Chandra was eager to keep them fit and healthy. They wore their old body armour. It wasn’t enough to withstand an energy pulse, but it sure worked well to weigh them down during their run.

“Put down your rifles!” she ordered.

She picked up two of the Assegais and tossed them over to the brothers.

“I had these put together for future training; same weight and feel of the real thing, but they just put out a small charge, which you’ll be sure to know if you’ve been hit. This is effectively an MPs stone baton.”

The Colonel ignored his rambling, knowing she’d teach him a lesson soon enough.

“Remember, you can strike humans with the edge and break jaws, crush skulls and break limbs, but not against an armoured Krycenaean. The thrust is the only way you can hope to hurt them. They are bigger, stronger and better armoured than we can hope to be. Our strength is in our agility and our speed. If you blunder about like an ox, you will die.”

She lifted one of the training Assegais and pointed at the two brothers to pick them up. They looked surprised, as she was gesturing for them both to come at her.

“What’s wrong? Don’t want the opportunity to strike an officer? Or are you not up to the task?”

A reserved and quiet laughter broke out amongst those watching and in that moment, the two brothers felt their anger grow. None of them liked being humiliated before the unit. They’d never heard the Colonel be so confrontational. They snatched up the weapons and rushed at her.

Blinker was ahead of his brother, and in his rage, swung a wide horizontal swing just as the Colonel had told him not to. She nimbly ducked and rolled under it. She landed firmly back on her feet and thrust her Assegai into Monty’s hip, a little below his armour. She’d rolled forward so quickly against their charge that he’d not even got his weapon forward before he felt the electrical charge pulse through his body.

The Corporal shook violently before going limp and dropping to the ground. She had not seen their effect before and smiled at the result. Chandra quickly straightened her legs and turned to face Blinker who had turned from his bullish charge and was coming back at her.

It was clear he had learnt something from his previous mistake and thrust forward as he rushed. Chandra tilted her body just enough to allow the weapon to pass over her right shoulder as she drove her knee into his groin. The Private keeled over her hip and winced in pain. She pushed him back, striking him with a hard left hook that smashed him to the ground.

The audience remained silent as they looked on at the two veteran soldiers lying incapacitated, and the Colonel not having a scratch. Their smiles were gone. She could already tell the lesson was getting through.

“I don’t mind you hating our enemy. Despise them, but never let your rage and anger drive you to recklessness. You are all professional soldiers. Our training is preparation for the real thing, and you must treat it as such!”

She paced around the arena her audience had created. She was pleased with herself but equally disappointed in her opponents.

“I know you’re tired. I know I’ve worked you hard. But let us not forget the conditions we had to fight in. We often went into combat with minimal sleep, exhausted and hungry. If you cannot fight to the best of your ability in such conditions, then you are not fit to be in this Battalion!”

Jones sighed but nodded in agreement at the same time. It was a lesson hard learned. They were being pushed to the limits of their bodies, but he knew she was right to do it.

“Today’s training is over. Rest and relax for the rest of the day, but remember today. Tomorrow we start hand-to-hand training from the start. Well done to you all for making it here and in good time. I am at least glad to see that fitness levels are being maintained. That’ll be all, fallout.”

Taylor’s eyes opened softly to see the comforts of his officer’s quarters in Camp Pendleton where he’d been back for only two days. The bed was soft and comfortable, the air fresh, and the temperature perfect. Beside him, he could feel Eli nestled into his side. It was a life of luxury he’d almost grown to forget. She stirred from a deep sleep and stretched out. Eli looked around for a moment as if surprised by her surroundings. Then she turned to Taylor and smiled at the realisation it was all real.

“I’ll never get bored of this,” she whispered.

“Where do you think Jones and the Colonel are now? We’ve been with them so long, its weird to be apart.”

“Well I guess Jones will be catching up with his wife. She won’t be too happy to not have seen him for a year.”

“He’s married?” she responded in surprise.

“Jones is an Englishman. He’d never discuss her publically. I only found out a few months back. Chandra is probably busting someone’s balls and preparing for the next battle.”

“Really? You don’t think she’s kicking back for a bit?”

He turned and looked to see if she was being serious before nodding with a smile.

He looked at his watch and sighed.

“Hey, we’re living like kings compared to what we had to put up with, so let’s appreciate what we have. We’re still marines, remember that.”

She sighed. She knew he was right, but getting out of bed in that moment seemed like the least logical action in the world to both of them. Eli groaned once again as she sat up and reached for her shirt. She stopped for a moment, looking at Taylor.

“Inter-Allied, what will happen to it now?” she asked.

“The war is over. We’re divided by the Atlantic and of different nations, and we have no headquarters or official status.”

“The war may be over, but it won’t be the last. One thing this has taught the world, is that our armies need to work more closely with each other. Inter-Allied will continue on. Don’t you worry about that.”

“It’s hard to imagine how it can work any longer. Separated like this, how can we continue the way we were?”

“That’s something to discuss over the coming weeks. For now, I think everyone is just happy to be back home and enjoying a little peace. Or what little peace the Colonel will allow our British friends. Come on, our two Companies will be forming up as I ordered. We can’t be late.”

“You’re in charge around here now, and you can be whatever you want to be,” she said with a smile.

She was clearly touting for more time in bed, and it was an alluring proposition, but he couldn’t allow himself to give in, no matter how tempting.

“Whilst we remain in the Corps, we’ll act like marines, Sergeant.”

She smiled in response at the hilarity of the comment, considering their current situation.

“Hey, I’m not saying a few rules can’t be bent here and there, but we can never let it get in the way of our duties.”