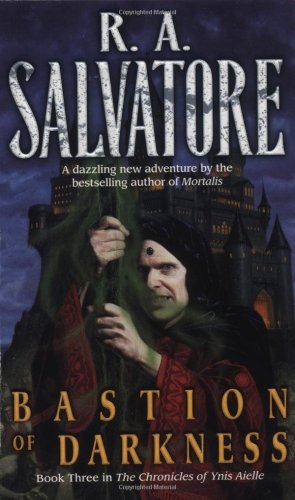 “Unforgettable … Another rousing and masterful
Demon Wars
adventure … A must-read for all fans of Salvatore’s work.”

“Absorbing … This is one of the finest books yet in Salvatore’s prolific career.”

“Salvatore’s best work since the
Dark Elf
series … An enthralling epic adventure story, it introduces memorable characters and an intricate scheme of magic the readers won’t soon forget. I am anxious for the next.”

Books by R. A. Salvatore:

Books published by The Random House Publishing Group are available at quantity discounts on bulk purchases for premium, educational, fund-raising, and special sales use. For details, please call 1-800-733-3000.

A Del Rey® Book
Published by The Random House Publishing Group
Copyright © 2000 by R. A. Salvatore

Published in the United States by Del Rey Books, an imprint of The Random House Publishing Group, a division of Random House, Inc., New York, and simultaneously in Canada by Random House of Canada Limited, Toronto.

Del Rey is a registered trademark and the Del Rey colophon is a trademark of Random House, Inc.

The Swordsman and the Witch

H
E LOOKED AT
her perplexed, an expression of confusion that caught the young woman off her guard, and, with an ambush set so close at hand, surely unnerved her.

“What do ye know?” Rhiannon asked, brushing her raven black hair from her face, her crystal blue eyes shining, flashing, to match the diamond that was set in her forehead—the mark of magic that identified her as a witch.

“The day,” young Bryan of Corning replied absently, a wistful smile brightening his face. “This day.”

“Ayuh,” Rhiannon prompted, glancing about nervously. “Are we not to fight them then?”

“My birthday,” Bryan explained with a wry smile.

Rhiannon’s face lit up, as much with relief that the lad had not seen any dangerous flaw with their ambush plan as with her sincere joy at the news of Bryan’s birthday.

Rhiannon’s smile only widened, but behind it came an honest surprise.
Sixteen?
she echoed in her mind, over and over, incredulously. With his delicate features and shining hair and eyes, the same brilliant gray orbs of his elven father, Meriwindle, Bryan did indeed have the appearance of youth. But his heritage was half elven, and even Arien Silverleaf, who was eldar of the elves and had lived through centuries, appeared youthful. Rhiannon
had spent three months beside Bryan, fighting talons along the southwestern fields of Calva and in the Baerendil Mountains, and never would she have guessed that this cunning warrior, this hero to so many of the folk who had been trapped on this side of the great River Ne’er Ending after the war, this strong young man who had slain so very many evil talons, could possibly be so young! Rhiannon herself had just passed her twenty-first birthday, and she had thought Bryan—so wise, so composed—to be at least her own age.

“Yer thoughts should be to the fight,” Rhiannon replied dryly.

“A kiss for victory, when the day is won.”

Bryan seemed satisfied with that. He gave a quick salute, then hoisted his shield, emblazoned with the crescent moon symbol of Illuma, the enchanted valley of his elven father’s people, and the bow that Rhiannon had created for him, and ran off to his appointed place.

Rhiannon watched him go with mixed feelings, both for him and for her promise. She had indeed grown to love Bryan, to admire and respect him fully. And he had saved her life, she understood, for without his companionship, without him holding her hand and calling out to her, bringing her back from the depths of the darkest and strongest magic the young witch had ever known, she never would have survived the great battle with the Black Warlock, Morgan Thalasi. In that battle, young Rhiannon had come fully into her magical power, though that power and all the magic remaining in all the world paled beside the glory the four wizards of Ynis Aielle had known only a few short months before—before the power-hungry Thalasi had reached too far,
had torn the very fabric of universal strength, had torn out the heart of the wizards’ secret domain.

After that magical fight, Rhiannon and Bryan had run together, for they were on the western bank of the River Ne’er Ending, while their comrades remained on the eastern side. Neither was afraid, and each had come to trust and understand the other, and for Bryan, certainly, and even for Rhiannon, that had evolved into something deeper and more special.

But for all the young witch’s love of Bryan, Rhiannon could not forget another, Andovar, the proud ranger of Avalon, her friend and her love who had been slain on the northern fields. Grief prevented the young witch from giving her heart to Bryan, and so soon after Andovar’s demise, Rhiannon wasn’t sure that the wound to her heart and soul would ever, ever heal.

So she watched Bryan go, and then let her promise fly away, replaced by thoughts of the more pressing situation fast approaching. The great river had been flooded by the magic of Rhiannon’s mother, Brielle, the Emerald Witch of Avalon, and of Istaahl, the White Mage of Pallendara. That watery deluge, the swollen river rushing down north from Brielle’s land and the sea itself sweeping in at Istaahl’s call from the south, had, in effect, ended the battle, stranding Morgan Thalasi and the bulk of his remaining talons on the western banks, while the combined armies of elven Illuma and the human kingdom of Calva had made short work of those unfortunate talons caught on the eastern side. The stalemate had continued as fall turned to winter, but though the eastern fields of Calva, the forest of Avalon, and the mountain valley home of the elves known as Lochsilinilume were safe now, many monsters dominated the western fields and mountains.

That was where Rhiannon and Bryan fit in, combining
their talents—his with sword, hers with magic—to hinder and destroy many of the rogue monster bands, to nip at what remained of the Black Warlock’s army, playing their part in driving the beasts ever farther to the west, back to the swamp and the dark passes of the dreaded Kored-dul Mountains.

Rhiannon brushed a finger over her lips and nodded, accepting this fate, her expression turning grim as she, too, moved into position. Once set, behind a large stone overlooking the pass, the witch sent her thoughts out to her friends.

She and Bryan would not fight alone this day.

Strong and handsome Benador, with fair hair and dark eyes, the king of Calva, trotted his stallion up and down the riverbank, taking care not to move too close to the steep embankment, which was slippery with snow. To those who had known him before the battle, Benador looked haggard now, but even so, he did not appear as old as his forty years. He had grown straight and strong in Avalon, secretly and under the protection of Bellerian, lord of rangers. He had been trained in the fighting arts by Bellerian’s son, the famed hero Belexus, perhaps the greatest warrior in all the world. But now King Benador had seen his first real battle, the most vicious conflict Ynis Aielle had ever known, and the images of the aftermath of that brutal struggle, the thousands of dead, the fields soaked with blood, and the fall of these four bridges, marvelous and magical constructions of Aielle’s greatest age, weighed heavily upon him.

More than anything else, it was the bridges, he decided. The blood would wash away, and men die in their time, but the Four Bridges of Calva, each construction a gift of one of the four original wizards, had been meant as everlasting. A spur still stood on the western side of
the river where the northernmost bridge had stood. That had been Thalasi’s bridge, taken down not by the flood-waters of Brielle and Istaahl, but by the thunderstroke of the fourth wizard, the Silver Mage Ardaz, who had stood tall and fearless against the horrid wraith that had served as Thalasi’s general.

King Benador looked long and hard at that spur, as he often did when taking his morning ride, remembering the fateful day when all the world had been turned upside-down. He hoped the spur would hold fast through the ages, a battered reminder of what had once been, and of what must never be again. Then the king turned his stallion about and passed to the south, toward the foundations of the southernmost bridge, the one the Calvans were now painstakingly reconstructing. The finest masons, architects, engineers, and craftsmen of Benador’s realm had come to aid in the work, but the king held no illusions that their combined efforts, however wondrous, would even come close to the majesty that had been the bridge of Istaahl the White.

No matter, King Benador told himself. The new bridge would be functional, would get him and his army across the river that they might finish off the remnants of the Black Warlock’s army and pay Morgan Thalasi back dearly for the horrors he had brought upon them.

Benador prayed for that chance.

Bryan crouched low behind the ridge of a snowdrift, eagerly watching the approaching talon band, biting back the disgust and revulsion he always felt when looking upon the hideous creatures. They had mottled green skin and scraggly, uneven clumps of dirty hair, and their faces were purely horrible, with sloping foreheads and large, flat noses and pointy yellow teeth—yellow to match the
sickliness that showed in their eyes—that seemed too numerous and too long to fit under their lips.

He rubbed his hands together often and blew in his cupped palms to keep his fingers nimble. The difficulties of the last months had hardened him to battle and to the weather, but the tips of his fingers had not yet grown accustomed, had not yet grown callused, to the use of a bow. Still, the young man had quickly become a fine archer—and how could he not be with such a bow as the one the witch’s daughter had presented him! He looked to the wood now with the highest admiration, awed by the beauty of the weapon’s delicately curving lines, the weave of its dark and light contours, all of it so perfectly smooth. This was no sculpted piece, but rather a created piece, a living piece, as though a tree had presented its child to the daughter of Avalon that she might train it in the ways of archery. The bow showed no marks of axe or knife, no scrapings at all, just a delicately curving piece of supple wood, polished by the light touch of magical Rhiannon.