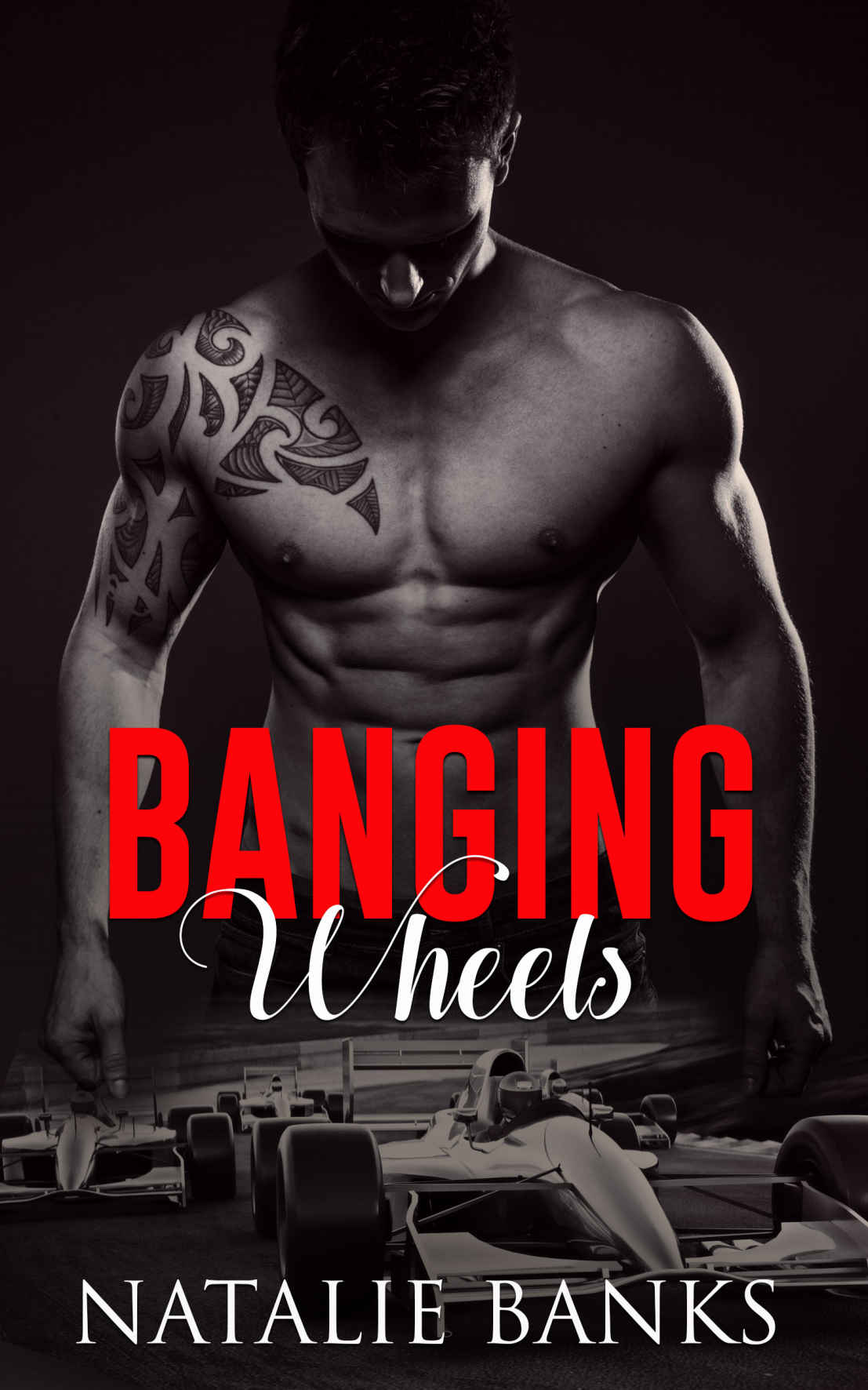 This is a work of fiction.  Names, characters, places, and incidents are the products of the author's imagination or are used fictitiously.  Any resemblance to actual events, locales, or persons, living or dead, is entirely coincidental.

Reproduction of this publication in whole or part without express written consent is strictly prohibited.

Maybe Callie should have known better — bars near to race tracks always seemed to attract creeps. And maybe the way she rode the video-game bike really was some sort of an incitement to a man of weak will. But hell, she was a born racer — why shouldn’t she ride the crap out of it?

“I only asked if I could join you for a ride.”

Cheap line, cheap guy. She didn’t even reply — just gave him a roll of the eyes and a dismissive shake of the head and he was on his way, greasy black hair and all.

She was only in town to sign a contract anyway. Sure, she was single, but that didn’t mean she was looking. And there was something about a guy like that that got under her skin. Her fingers rummaged around in the tight pockets of her jeans for more coins. Dammit, she was all out. She dismounted from the plastic bike and headed over to the bar. The barman, drying a glass, came over.

“I’ll get this one,” came the voice next to her.

She only looked at him to roll her eyes, but she still caught more of him than she had bargained for. A chiseled face with acres of stubble, softened by a pair of baby blue eyes, finished off with hair casually swept over in a way that suggested he didn’t own a comb, and likely just used his hand.

“He probably just uses his hand for a lot of things,” she thought to herself. But she didn’t really believe it. In fact, the opposite was probably true. He looked like the kind of guy who could pick up any woman he wanted. He had that kind of slick way about him that suggested he knew what he was doing, and that he had plenty of experience in the field.

That was exactly why she didn’t like him. He was exactly the kind of guy she didn’t want or need. She could be hot-headed and excitable, she had that much self-awareness. It was why she’d dropped out of her history major — she just couldn’t do the hours of solid study. She was too easily distracted. What she needed was the opposite of her — someone stable, a guy who could keep her in check. What she didn’t need was another jerk. Not after last time.

He put his hands up and backed away with the cutest smile, leaving her to it.

She went back to the racing game, which consisted of a pair of mock-up bikes fixed next to each other, and threw her leg over the first one, her jeans tightening as she did so. She dropped some coins in the slot and picked the hardest level. As the game’s pixelated intro sequence began, she felt guilty, that maybe she had reacted a bit too quickly. He was only flirting, and the fact that he let it go told her he was at least respectful.

She dealt with men with way people in medieval times would deal with witches, according to what she’d learned in her history classes. They would dunk the witches in the river, and if they floated, then they were guilty and were done away with. If they were innocent, then they drowned anyway. Maybe that was why it had been so long since she’d gotten laid.

The siren on the game bleated, indicating it was about to start. With the throttle held full open, the graphical rear wheel spun, smoked, then gripped, and the pixels started to fly.

It was a crappy plastic bike, nothing more than a substitute, a way to get the tension out of her system before the meeting the next day. The biggest day of her career so far. The day she became a full-time professional racing driver. She raced open-wheeled cars rather than bikes, though frankly she’d race anything, and her own motorcycle was outside in the car park.

She leaned into the first corner — it was one of those games where you steer with your weight — and the image of the bike slid unrealistically, the whole thing wobbling as she tried to straighten up again without the help of natural forces and the gyroscopic effect to get it right.

This crappy plastic thing didn’t deserve to be between her thighs. There was nothing like the feel of the real machine throbbing down there. For a moment, she was transported, imagining the wind whipping her leathers, the thrill of acceleration, the smells of the world changing rapidly as she burnt across the state on back roads. She thought of Marianne Faithfull in The Girl on the Motorcycle, riding rampant on her bike in sexual delight.

Wow, it really had been too long.

Three laps later, she crossed the finish line, soundly whipping the computer opposition. It wasn’t very satisfying. It never was, beating software. She liked racing against real people. She’d liked it as long as she could remember. Right back to the time she earned her way into the boys-only treehouse as a child, by out-wrestling the kid whose garden it was in. Not that anyone would ever call her a tomboy. She was all true woman, just an intensely competitive one.

She turned to see a strong hand stroking stubble, and above it a pair of baby blue eyes.

“I mean, not amazing, but not bad either.”

“Like you could do better.” Who was this jerk thinking he was in a position to judge her? She was a professional racing driver as of tomorrow.

She shook her head — she wasn’t falling for such an obvious ruse.

“I mean, you were sandbagging anyway, right?” he said, with a teasing smile. “You were just taking it easy.”

He shrugged and slowly walked away. She tried hard not to respond. So hard. But something rose up inside her — pride? Annoyance? And maybe something — just a little — to do with those gorgeous eyes of his. Within seconds she was captive to a force stronger than good sense. He continued to walk away slowly, ambling almost, practically throwing a baited hook over his shoulder as he went.

He stopped, turned, and fixed her with a sly look.

“Well, only if you insist.”

Within moments they were mounted next to each other, watching as the on-screen point-of-view circled around the graphical motorcycles, which sat waiting on the graphical asphalt of a graphical racetrack with a crowd of graphical spectators in attendance.

He turned to look at her with a wry smile, then looked back to the track, then back at her again. That gaze, those blue eyes; it was almost unnerving.

“What?” she said, gazing him down.

Then, with them still both staring, and her lost in the moment, came the sound effect of squealing rubber. Too late she looked ahead and realized he’d tricked her. She twisted the throttle to its limit, and put her head down instinctively, as though aerodynamics actually made a difference in this game.

She spent the whole first lap trailing in his wake, feeling the burn of annoyance. What a complete jerk, trying a trick like that — Jesus, it was only a game — but also feeling the buzz of competition. From her kart racing days, she’d seen a lot of sly-handed tricks — and even tried a few herself — but it still had caught her out. By the second lap, she’d calmed down and started to get into a rhythm. That was the key. The track was quite sinuous and full of medium-speed bends. It wasn’t like real racing — it was far too forgiving of accidents — but certain things were the same. Focus. Get into the zone. Make as few mistakes as possible. As she began to close, all the pressure was on him. Little by little, she reeled him, and as they went down the main straight at the start of the final lap, she blazed by.

Now he was behind her, and the pressure was reversed. But she was used to racing from the front — she’d qualified in pole position in over half the races last season, and won from there nearly every time. Blazing the trail was not a problem for her.

She guided the bike through the rhythmic flow of corners, now becoming quite familiar in order. The finish line was getting nearer. Four corners to go before she’d shut this loudmouth up. Then three. Then two. As they approached the final corner — a long, slow bend — she was comfortably in control. Get the corner right, and she had the race won. She leaned into the corner, started negotiating the curve, and then suddenly, she felt her bike twitch back upright, even though all her weight was down on it. What the hell? The graphical representation of her bike straightened suddenly and veered off the corner. She looked down to see what was happening, just in time to see his foot withdraw from her bike and take its position back on the footrest. The motherfucker had pushed the bike upright.

She guided the bike back onto the track and accelerated down the straight, but the game was already up. He was celebrating with his hands in the air as he crossed the line, the computer game flashing up “2nd” in huge letters on her screen.

“Well done!” he said. “You were the first of all losers!”

She looked across at him, her mouth hanging open.

“I can’t believe you did that. You total cheat!”

“Buy you didn’t, and that’s all that matters.”

She got off her bike, actually feeling quite angry, legs shaking, standing in the small gap between the two bikes and squaring up to the stubbly, blue-eyed cheat in front of her. Sure it was just a game, but... oh come on, it was never just a game.

“You’re a cheat. Imagine if I’d pushed you.”

“Imagine if you had pushed me.”

That triggered something. Callie leaned forward and did push him.

His eyebrows jerked up in surprise — he wasn’t expecting that — and he threw his arms out in front, searching instinctively for something to hold on to. He found only her own arms, within the leather sleeves of her jacket. He grabbed at them and pulled, arresting his own fall, but also yanking her towards him. She collided with him. For a brief moment they were conjoined, her leaning into him, looking deep into his blue eyes.

The surprise subsided, replaced by something more accommodating. She helped him hoist himself back up, pulling them close yet again, their fingers still gently touching. She felt that moment of exhilaration, and dared herself to keep holding on.

Drake was closer than any man had been in a long time.

It felt so familiar to be nestled together like this, despite never having met him until minutes earlier. And it felt like the most natural thing in the world when they both leaned forward an inch more and their lips came together, brushing against each other, before connecting fully. Slowly they kissed, her lips finding their way around this unfamiliar territory, his stubble scratching her face. They pulled apart again, slowly, and she found herself gazing into his eyes. But it was like tossing a match into dry grass for her — she never could control herself once her passion was ignited. She leaned in again, her fingertips ruffling the hair on the nape of his neck, and they came together in a long, deep kiss.

What was she doing? Who cared. She’d forgotten how good this felt.

“Get a room,” said the greasy-haired guy, walking by.