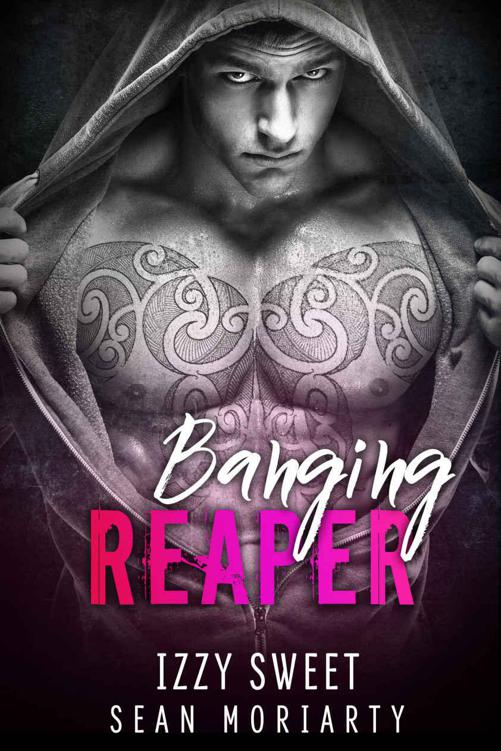 See all works by Izzy Sweet at

Many thanks to Lloyd. Reaper wouldn’t be Reaper without you.

I like to hurt. I fucking
love
to cause pain.

Punching someone hard in the face isn't much better than sticking my hard cock into some tight little cunt, but it sure comes damn close.

I love the feel of my body slamming into another body as hard as I can. I like locking them up in an unmovable position and making them submit to my will.  Hell, I like doing that with women just as much as I do an opponent.

Although I don't hit women, and I’ll fuck up any piece of shit I catch doing it.

I dodge quickly to the left as I stick out a couple of jabs at the shadow on the wall in front of me.  I can already feel my skin slightly sweating, my body slowly loosening up from all the tension that’s built up from the last week or so. Instead of tensing up I loosen up and feel the energy that flows into me.  It’s a heady mix of anticipation and adrenaline. If I could bottle up this feeling and sell it I would be the world’s wealthiest person.

I've never tried drugs, but I wonder if they can even come close to the feeling right before and during a fight.

“Remember Chase this guy has had pushovers to get to this point.  He's never had a straight ground and pounder coming at him,” Dale, my trainer says. He’s as close to a brother as I can imagine having.  I don’t exactly come from a big family. It’s me and Dad and maybe some cousins off in the distance.

Dale's right though, this Ethan guy had the easy road to my title.  He hasn't had the long drawn-out battles where you spill more than a little blood to the gods of war.

Ethan Bennett, what a mouthy little bitch. Fuck him and that hot piece of ass he brought to this fight.

“Chase, you're in the zone already aren't ya?”  Dale laughs quietly.  He’s fully aware of my hatred of Ethan.  He knows the anger that has slowly been building up over the last couple of months. I may be an asshole but I don't talk a bunch of shit.  I keep my mouth shut and let my skills as a fighter do the talking.  I've earned my stripes, and he isn't the first mouthy little shit to come at me mistaking my quiet calm as a weakness.

And he won't be the last.

Hell, I am the fucking Reaper. Chase the Reaper Winters.  That’s the title given to me, not some fucking name I picked because I wanted to be cool like Ethan Lightning Bennett, which is just some cheesy ass name he thought up after his first couple of fights because he hadn't earned a name yet.

“You see that girl who was with him tonight, Dale?”  I ask with a small laugh of my own. She’s one hot fucking woman.  I don't usually go for girls who don't fit my cheerleader bimbo stereotype, but there is something about her that is absolutely fucking hot.

“Yeah, I did. What the fuck was he thinking parading her around the building?” Dale mutters. It’s not that he doesn't like women, it’s that it was a bit unprofessional to bring a girl who wasn't part of your team into the fighter’s area.

“I haven't seen her before. He may have just paid some hooker off the strip to be his arm candy tonight.  Hope he doesn't think she’s going to be a good luck charm for him.”

I hear a sharp rap at the door and the head of a security guard pokes in. “Hey Chase, refs here.  Wants to go over your taping and a quick rundown of the rules?”

“Send him in, Preston,” I say calmly, pulling my hood back off my head.  I stand up straight and jump a couple of times on my toes.

“Chase, good to see you again.  How’s your dad doing?” says Harry, the guy who will be the ref over the fight tonight. Trailing behind him is a state-sanctioned official to make sure everything is done by the book.

Raising my taped hands up for inspection, I smile at Harry. “Doing good. Just had the knee replacement a couple of weeks ago and he's already trying to climb the walls. That man puts me to shame when it comes to how hard he is pushing his workouts. He wants to set the record for a full recovery in the rehab facility.”

Frank, the official from Nevada Athletic Commission, stands behind Harry stoically and remains quiet. The official guys usually do.  They make sure it’s all by the book and have absolutely no sense of humor.

Tilting my head to the side, I hear a nice pop and smile. It's going to be a good fight tonight.  I can feel it in my bones. And when I’m done fighting I’m breaking my celibacy or my diet. Who am I kidding? I’ll probably break both. A hot little blonde and a pizza sounds just about perfect.  I don't care in which order either, though if the blonde comes first I might try to eat her too.

Harry makes his mark on the tape showing he finds nothing of concern and then the state official does the same thing.  They both leave quietly as I turn back to the wall and watch my shadow stand there barely moving. I can feel my body starting its pre-fight buildup of adrenaline and anticipation.

This is it, I've been officially and completely cleared.  It’s time for the fight.

Harry and the state official are going to be in Ethan’s room next, doing the same thing they just did with me.  It’s on now. As loud and as mouthy as that bitch Ethan is he’s probably foaming at the mouth at the thought of tearing into me.

“Want to go over any strategies or plans?” Dale asks me with a wink.  He knows I don't, but that doesn't stop him from asking.

“Nope,” I say. “I'm good.” It’s our ritual we do before every fight, every single one of them.  It’s the last thing I usually hear from Dale before we walk out.  I want my silence. I want my time to get ready.  And to be honest, this is the time I get giddy and start to smile.  I feel like I always know how the fight will go right about this time…  This small time before the violence.

I like to fight, and I like to hurt people when I fight.  I don't tend to admit it to many people though. Dale knows, Dad knows, and that’s about it.  I'm not a sadist or a masochist. Or fuck, maybe I am? I don’t know. But if I have to take a little pain in order to cause some, I'm all for it.  This is one of the best ways I know how to spend a Saturday night. And when I win, I make a shit ton of money.

This is the twenty-fifth time I have fought, and it’s going to be the twenty-third time I win.

Twenty-five isn't that big of a number. I mean, I’m older than that number by three years.  It’s small in most respects except for one: How many times I have been willing to put myself and my life in jeopardy.  The number two though is much larger to me.  Two, as in I have lost to two other combatants. I went up against them and I faltered.

I pull out my phone and slip my ear buds in.  I like the way the loud heavy metal drowns out all other noise. It keeps me calm, centered and focused.  It's time to blare some Amity Affliction.

A few minutes later Dale waves a hand in front of my face to get my attention.

I pull my buds from my ears and hear the music for Ethan playing loudly in the arena.  He’s going out to the cage before me and from the sound of it, his entrance music is close to ending.  I’m not sure how long I’ve been closed off with my ear buds in, but it was long enough.  I stop moving around and stand still for a few seconds, hearing the crowd noise and getting pumped up.

Dale steps out of the door first and holds it open for me. Everything is a ritual just before a fight. It helps me stay calm and focused. I need to know what’s about to happen. No surprises. No sucker punches.

Walking out from under the stands, the chords of my heavy metal song thrums loud enough to vibrate my chest.  This is it, the time to fight.  Fuck yeah.

I walk with a purpose towards the cage, I don't saunter or swagger down the aisle like I think I’m hot shit. I’m calm and confident, wearing only my Reaper grin.

“Reaper! Reaper!” some of my fans scream and chant.

Tonight is going to be so fucking good. I walk a little faster, I can’t wait to get started.

I glance into the ring and climb up the stairs to the ref and cutman. They are awaiting me just outside the ring. The cutman smears some petroleum jelly across my brows, to help prevent cuts early in the fight.

Inside the ring, I can see Ethan already waiting for me. He’s dancing around his corner of the cage.  He’s definitely pumped up for this fight. As soon as he sees me, his jaw starts moving and he taunts me from across the cage.

I feel a slap against my back and I step into the cage. The ref calls us up to the middle and I finally get to stand in front of Ethan, face to face.  I have him by an inch. I grin as I look down on him.

Being pointed back to my side and him to his, I bring my fists up and tilt my neck to the side to pop it again. The smile on my face becomes bigger, I feel it already, I’m going to cause some motherfucking pain. I’m going to mess up his pretty boy face.

“Are you ready?” Harry shouts to me.

I nod, more than eager to get started.

“Are you ready?” Harry asks Ethan and gets a similar nod.

Ethan isn't smiling like I am, he’s stone-faced.  Oh well, I just hope he doesn’t have as much fun as I plan to.