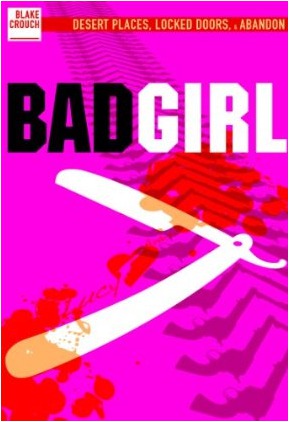 BAD GIRL is a work of fiction. Names, characters, businesses, organizations, places, events, and incidents either are the product of the author’s imagination or are used fictitiously. Any resemblance to actual persons, living or dead, events, or locales is entirely coincidental.

For more information about the author, please visit www.blakecrouch.com.

For more information about the artist, please visit www.jeroentenberge.com.

Lucy sat down at one of the few empty tables on the perimeter of the hotel bar and hoped none of the waitresses would notice her. She was fifteen years old, and even wearing the makeup she’d taken from her mother’s vanity, she knew her chances of getting served a drink were remote. Worse, she was taking up real estate that legal customers willing to pay ten dollars for a mediocre glass of wine could have inhabited. And there were plenty of them about, the bar nearly full and the hotel lobby bustling with well-dressed adults older than her mom.

The convention didn’t technically begin until tomorrow morning, so none of them wore name badges. But she felt sure her eyes were passing over famous mystery writers, perhaps even people she’d read. The man she’d come to see, Andrew Z. Thomas, the convention’s guest of honor, for whom she’d stolen her mother’s car and driven six hundred miles on a learner’s permit, had yet to make his appearance. Just the thought of him being in the same building made her knees feel weak.

Lucy turned and met eyes with a waitress now standing at her table, a pretty girl, probably in college, her dirty blond hair drawn back into a ponytail.

Lucy said, “Could I just get a water, please?”

“I’ll get in trouble if the manager sees you sitting in my section. I’m sorry.”

Lucy stared at the waitress, then lifted her handbag off the table and climbed down from the chair. They’d already refused her a room because of her age. Now this. What a mean hotel.

She was two inches shy of five feet, and she felt even smaller threading her way through the groups of conversing adults in the lobby.

“—got a two-book deal for mid-six figures, which just strikes me as a crime considering his last didn’t even hit—”

“—not sure if my editor’s coming or not. She was supposed to have finished my manuscript by now—”

“—and every time I turn around, Darling’s right there, like he’s stalking me or—”

She broke out of the crowd and found a cluster of unoccupied chairs and plopped down in one. From this distance, the din of conversations mixed together like the static of a waterfall. She leaned back in the leather chair and stared up the full height of the twenty-one story atrium, the uncomfortable pang in her gut not all that dissimilar to what she experienced every day in the high school cafeteria. Invisibility. The people around her untouchable, unreachable, as characters in a movie while she watched them onscreen from the darkness of an empty theater. This sense, that had been with her for as long as she could remember, even before her father had died, that she wasn’t a participant in any of this. In anything really. Only an observer.

When Lucy straightened in her chair, she saw that a man now sat across from her. He looked old to her, though he wasn’t even thirty. Sports jacket. Khacki slacks. Sending out big wafts of cologne which she thought smelled pretty. He seemed either angry or nervous, and he kept looking at his watch like he was waiting for someone, but if he was, they never came.

She watched him, and the third time their eyes met, the man gave a thin smile and nodded.

He didn’t have a name badge either, but Lucy took a stab anyway. “Are you a writer?”

“Cool.” The man looked at his watch again. “Are you here for the convention?” she asked.

“What books have you written?”

“Well, my first one just came out two months ago.”

“Um, it’s…well, it’s like, it’s about this big family in Portland who has this reunion and one of the older brothers is killed. Or rather he’s found dead, and the police come and make everyone stay while they investigate. What you’d call a locked-room mystery, I guess.”

“Will they have it in the book room?”

“Do you have a copy with you?”

“Not on me. Look, it was very nice meeting you, but I have a, um…something to get to.”

Lucy watched Mark wander back toward the hotel bar where he stood on the perimeter of the crowd. He looked around and kept glancing at his watch. After awhile, he turned away and started back through the lobby to the elevators.

Lucy stood up and grabbed her handbag and followed.

The middle elevator in a row of three lifted out of the lobby, and through its glass, she could see Mark leaning against the railing inside, looking out across the hotel.

She watched it climb. Counted the stories until it stopped and then followed Mark’s progress onto the fourteenth floor, counting doors to the room he disappeared inside.

Lucy rode alone, watching the lobby fall away beneath her as the elevator car soared up the back wall of the atrium.

She walked the exposed hallway, the noise from the lobby faint up here and no one else about. From the door beside 1428, she grabbed a “Do Not Disturb” sign and hooked it on the door to Mark’s room.

Then she put her ear to the door, couldn’t hear anything. Knocked.

In a minute, it swung open, and Mark, now wearing only a white oxford shirt and khaki pants, stood staring down at her, looking both confused and vaguely annoyed.

“I just wanted to see your book. The one you told me about.”

“You followed me to my room to see my book?”

“Look, maybe I’ll see you downstairs tomorrow, and if you buy one of my books, I’ll even sign it for you. How would that be?”

Lucy furrowed her brow and made what she hoped resembled a wounded expression. “Why don’t you like me, Mark?”

She put her face into her hands and pretended to cry.

“You’re the first real author I’ve ever met. I don’t know anyone here.”

“Where are your parents?”

“My mom’s in our room watching ‘Dr. Quinn, Medicine Woman.’”

He sighed. “If I invite you in—and only for a minute—will you stop crying?”

Lucy wiped her face and followed Mark into the hotel room. His suitcase lay on the bed, open but not yet unpacked, and Mark was bending over a cardboard box and trying to tear open the top.

“I brought twenty copies of
A Death in the Family
.” He pulled a trade paperback out of the box and handed it to her. Lucy thumbed through the pages, skimmed the flap copy on the back.

The cover was of a gravestone, the book’s title engraved into the stone above the author’s name: Mark Darling.

“Is anybody else sharing the room with you?” Lucy asked.

He tilted his head slightly, like he couldn’t comprehend the question. “No, just me.”

“I need to use the bathroom.”

“Right through that door.”

“Would you sign this for me while I pee?”

She gave back the book and walked into the bathroom and closed the door.

“Write something good!” she called out from inside.

She did have to pee actually, and when she’d finished, she flushed the toilet and washed her hands and took all of her clothes off. She folded them and stacked them on top of her black Chuck Taylors on the toilet basin under a towel, then turned her attention to her handbag.

The marble of the sink was cold against the soles of her bare feet. She walked down to the end and crouched down beside the door.

She’d been in the bathroom more than five minutes already, and she crouched there another five, her legs beginning to cramp, before Mark’s voice passed finally through the door.

She brought her hand to her mouth to suppress the giggle. She’d imagined this a hundred times, and something about the moment finally being here struck her as funny and surreal. It was the strangest thing. Her body felt all tingly, like whenever she had been around Bobby Cockrell, the first boy in high school she’d had a major crush on.

“You’ve been in there awhile,” Mark said. “Everything okay?”

Children of the Wastes (The Aionach Saga Book 2) by J.C. Staudt
War Bride (Battle Born Book 7) by Cyndi Friberg
The Forgotten City by Nina D'Aleo
Hilda - The Challenge by Paul Kater
Carisbrooke Abbey by Amanda Grange
Disruption by Jessica Shirvington
You Might Be a Zombie . . . by Cracked.com
MINE FOREVER (BOOK III: The Billionaire's Obsession) by J. S. Scott
Renegade by Cambria Hebert
Girl on the Run by B. R. Myers