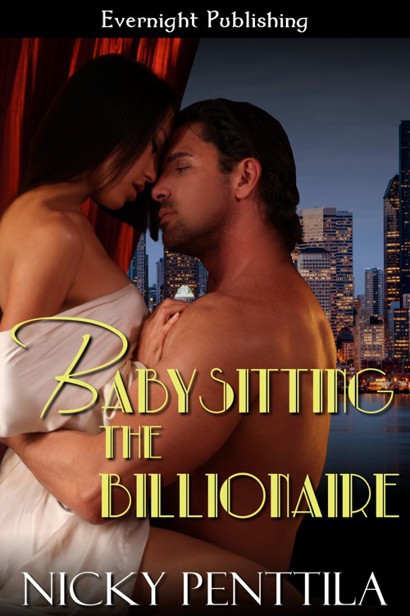 May Reed was running late, as usual, and as usual, her
boss was waiting for her. This time, though, Sadie stood in the reception area
as she stepped off the elevator.

“Honestly, May, you only have to come in to the office
twice a week. You might make an effort.”

“Markus wants to see you.”

The Big Boss? The coffee she’d gulped down just before
stepping in the door burbled threateningly in May’s gullet. “I’ll be on time, I
swear it.”

Sadie’s eyes crinkled at the corners, though her mouth
remained stiff. “It’s not that. It’s a special assignment. Actually, I’ll tell
you all about it. He just wants to put the fear of god into you. We can’t mess
this up.”

Mess what up? The resident artist for the Save the
Penguins Foundation, May didn’t think anything she could possibly do would
threaten the organization, such as it was. But she dutifully trudged behind
Sadie up to the third floor.

Markus Edmondsson had made a name for himself by
reaching both poles before his thirtieth birthday. He’d lost a couple of toes,
and his political momentum, though, and at forty-something was the growly head
of this less-than-groundbreaking organization. When Sadie knocked on his door,
they could see him pacing, a caged tiger, through the tinted-glass of the
window. He waved them in and went to sit behind his creepy desk of walrus skin,
his skin as blanched as the hide. Sadie and May sat in the supplicants’ chairs
facing him.

He stared at May a full count of twenty without even
blinking, or so it seemed to her. Were his glacier-blue eyes like that before
the expeditions, or had they been chipped away during the trek?

“This one?” He shifted his gaze to Sadie, who visibly
fought not to squirm.

He flicked his gaze back to May. “And what do you do for
us, young lady?”

Well first of all,
old mister, I’m no young lady anymore.
May was so
mad she almost giggled, jangling already jangly nerves. “Sir. I do the artwork
for web and print and assign the video editing for the site.”

He paused, and then seemed to decide something. “Good.
This is it, then. We need you for a special assignment. It is mission-critical,
but due to extreme circumstances we can’t give it to the people best trained to
do it.”

He stopped, looking at her. Was she supposed to say
something? What did good worker bees say to such a cryptic statement? “Well,
I’ll do anything I can for the foundation. I love my job, and I believe in our
mission.”

“And what is our mission, Miss Reed?”

The affront implied in his tone kept her anger on top of
her nerves. She smiled sweetly, she hoped, and parroted the company line. “To
ensure habitat for all penguins worldwide.”

“And this is how we plan to do it.” He leaned forward,
palms on the dead-animal desk, icy eyes starting to blaze. “Another
expedition.”

She wasn’t following. “You want me to go on an
expedition?”

“God’s nose, no. I want you to handle our special case.
A funder, who wishes to remain anonymous, but whom we’ve convinced to come to
DC for this year’s gala so long as we keep his trip hush-hush. That’s your
job.”

May looked at Sadie, in her DC gray power suit, silk
blouse, and upswept blonded hair. She fought the urge to smooth out her own
crinkled-cotton midi skirt. “Sadie and her team are the press people.”

“Exactly. So if he’s with them, the press will sniff him
out.”

She was starting to follow. “And if he’s with me, no one
will care.”

“Exactly. She is, indeed, smarter than she looks.”

May had heard that one so often she just let it go. Small
price to pay for looking ten years younger than she really was. “What does this
babysitting entail?”

“Sadie will fill you in. I just wanted to get you on
board and emphasize. Emphasize,” he sliced the air with a hand, “how important
this is to us. He’s agreed to fund the entire expedition, provided we find the
funding for a video crew.”

“But that’s tens of millions of dollars.”

“Right again. So it’s critical. Critical,” he pounded
his dead-animal desk, “that we keep him happy. Understand?”

May caught herself before she jumped at the sound,
covering the move by crossing her arms. The man had a mean bluster. “You want
me to have sex with him?”

“Great gods, no. We’d find him a pretty prostitute if he
needs one. Sadie knows how to do that. All you need do is keep him on track, on
time, and happy. As happy as a man like him can be.”

What did that mean? “He’s in mourning?”

“No. Where do you get these ideas? Is it an artist
thing?” He said it as if the word tasted bitter. “He’s one of those tech geniuses.
Just give him a big enough computer and wake him up for meals. Whatever. Just
get him to the party on time, and we’re golden.”

The man pushed up to his feet again, and May and Sadie
jumped to theirs.
Dismissed.

The women walked down the stairs and into Sadie’s office
in silence. After the ferocity of the boss’s lair, Sadie’s brutalist
steel-and-glass furniture looked positively welcoming. She ushered May in
first, then followed, closing the door behind her. She sat on May’s side of the
desk, nearly knee to knee. May had to lean a little forward or her feet
wouldn’t touch the ground. The world was made for six-footers, and five-footers
could just swing.

Sadie handed her a folder, but May dropped it. They
almost clanged heads stooping to pick it up. Sadie set it on the table instead.
“I’m sorry you got dragged into this.”

“Why can’t you do it? How can we possibly keep some
celebrity under wraps? Won’t everyone know at the party, when it’s announced?”
Something smelled wrong.

“Slow down. He’s a recluse; practically nobody outside
his field would recognize him. But we can’t take the chance that some business
reporter might spot him.”

“Then why is he coming at all?”

Sadie looked as baffled as May felt. “Search me. But he
wants to come, and no one says no to Beau.”

“Beau? Wait.” The pieces were starting to fall into
place. She knew of only one Beau who would have the millions to drop a ton on
some tiny foundation.

“So you see the problem.”

She did. Kurck, the biggest little app-maker in the world,
had hit the big time with a wickedly addictive game of catapults.

The next Monday, May stood with the throng collected
outside the customs exit at
. She’d spent the
intervening weekend reading up on Beau Kurck and the penguin-hurling empire
he’d built.

Tall and couch-potato soft, he had a reputation for stoicism,
even among his own people, the not-known-for-talking Finns. The only child of
two teachers, he’d done predictably well in school. A close-knit cadre of
polytechnic friends formed the backbone of the company, Joki, which meant “river”
in Finnish. She was surprised to learn the catapulting penguins strategy game
was not the team’s first app, but its seventh. The first six had gone nowhere.
So, Mr. Roly-Poly knew how to brush himself off and start again.

She scanned all the people exiting singly, focusing on
the tall ones. TSA had helpfully stuck one of those height stickers on the door
frame, perhaps in case she was called on to identify fleeing felons. He seemed
to be taking forever to get through Customs.

She shifted her weight onto her other foot and lifted the
sign she held a little higher. She was using the top edge as a chin-scratcher
when a far too handsome man stopped directly in front of her. She froze in
admiration.

Dark hair fell across a tall forehead, sweeping sharply
angled brows. They crowned wide, blue-sky eyes, clear even as the skin around
them was a tiny bit puffy from the flight. But the cheeks, and that chin, and
that chest. May had heard the word chiseled used to describe men before, but
privately had only ever used it for sculpture. This man could make her change
her mind.

“Penguin Foundation?” His voice carried the trace of an
accent, a hint of confusion, and a whisper of laughter.

“You’re late,” he said, but he didn’t sound angry.

So he was that
kind of asshole. “Yeah, ha ha. I get that a lot. Could I take your bag?”

“How could you? You’re not even as big as my bag.”

She frowned, looking at the regulation carry-on sized rolling
bag.

“First, I need a triple espresso, a decent one. Then I
need at least broadband Net access and a quiet place to work. Then, an
assistant who doesn’t patronize me.”

“Well OK, then, let’s head on over to Caribou, down the
hall a ways.” May turned and started walking in that direction as fast as her
little legs would take her. “Second, we made sure your hotel had double your
required bandwidth as well as backup, so we’ll go there next.”