Read Ashes of the Fall Online

Ashes of the Fall 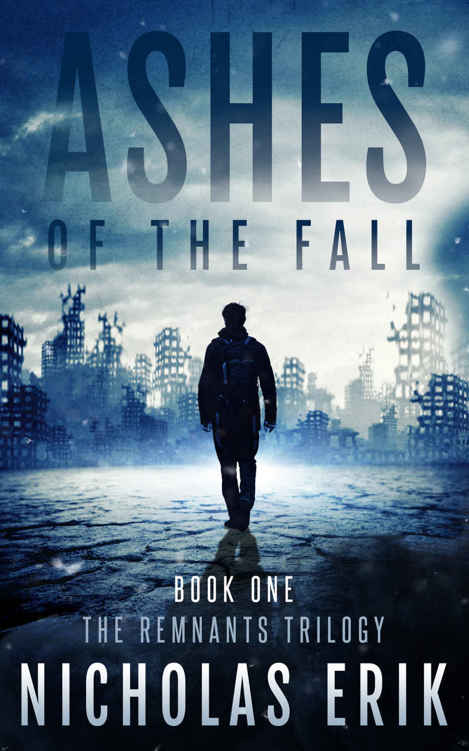 This book is a work of fiction. Similarities to actual events, places, persons or other entities are coincidental.

The transcontinental Hyperloop’s
doors open, and I push past the throng of briefcase carrying businessmen and sensibly heeled career women to slip off the bullet-pitted train as quick as I can. A dull, automated beep at the base of my ear—one only I can hear—reminds me that I need to be at my appointment in an hour. Citizens grumble about rudeness and common decorum as I elbow through the crowd, but let’s not kid ourselves—pointing out flaws in others isn’t the same thing as possessing actual decency.

I adjust the pack containing everything I own and put my head down, staring at the dirty concrete platform. The remains of a poster announcing the North American Circle’s 22
nd
anniversary, complete with Chancellor Tanner’s smiling visage in graffiti relief, flutters by my boots. Four hours, fourteen stops and three thousand miles and I’m still in a place that resembles my own home, down to the jackbooted thugs with high-caliber assault rifles lining the turnstiles ahead.

The tall mesh fences leading to the customs gates have the ambiance of slaughter chutes, endless lines of citizens streaming through. Craning my neck to survey the landscape, I assess that Turnstile C has what I’m looking for: a young scanner of maybe twenty-three, twenty-four. She doesn’t make eye contact with the people she scans through—nervous, shy. Pretty, but not pretty enough.

None of us is. I’m not judging, just using that evaluation to my advantage. Her not-quite-there prettiness has manifested into a hidden contempt made clear by the tightening of her jawbone with each progressive scan.

The system, in some way, has wronged her—and that makes her the right choice for me.

I rub the base of my neck, where the HoloBand install is still fresh. Show time. I push the jacket’s collar over the fresh mark and then I get to work.

I pull a piece of paper from my pocket, pen in the other, and write down the location of a bar—one I heard about on the Hyperloop intercom—and the time six o’clock. I also add
come alone
, for good measure. When I come up in line, I’ll adjust the note accordingly—if it’s
those
kind of drinks, or a secret meeting.

Build rapport, work the mark. Or maybe I won’t have to use the note at all.

And then I step into line, the
ring-ting-ting
of the scanner pushing everyone through at an amiable clip. The nervous thrum within the station is thick enough to cut through—heartbeats slightly askew, the rhythm off. Each confirmed scan might not be a happy chime, but it’s the closest thing that exists in the NAC—one that confirms you aren’t a threat to the status quo.

Wouldn’t want one of those coming into New Manhattan. Beyond the turnstiles, through the chain links and crowd, I can see the overhang of the station’s end segueing seamlessly into the city street.

Outside looks like freedom, an endless cascade of nano-bot assembled skyscrapers and self-driving cars. All the tech does, though, is grant citizens the privilege of cramming themselves in boxes that a mouse would find small. That shit hasn’t completely dominated the Western Stronghold yet, and I can’t say that I’m waiting for progress with bated breath.

But don’t think for a minute I’m one for the frontier—I just like being able to see the sun rise every now and again. Not just its reflection, bouncing off a thousand panes of glass and brushed aluminum.

A different chime breaks the rhythm, and I can hear the crowd’s collective hearts stop. It’s two turnstiles to the right, a slightly chubby woman with a nervous demeanor. She’s talking with the gatekeeper, whispering, her face red, trying to explain why her HoloBand scanned incorrectly.

I can tell, even before the gatekeeper presses the button beneath his terminal, that she’s screwed. Her movements are shaky—not the demeanor of the innocent. She’s trying to sneak into New Manhattan, just like me.

Only problem is, only one of us is any good at it.

Two soldiers, their rifles at attention, boots shined to perfection, take determined, same-length strides over. They don’t hear her complaints, her explanations.

Everyone else does, though.

“I need to see my son,” she says, her voice a loud wail, “he’s sick, and that—that charge was years ago! Almost a decade! I’m not a criminal! You can’t do this.”

But the soldiers do, and she and her complaints are quickly eliminated, summarily dispatched so as not to intrude on anyone else’s day. The nervous equilibrium returns, everyone thinking
damn, what’s it all come to
and wondering how we all got here, all while thanking whatever invisible deity they choose to believe in today that it wasn’t them who got pulled out of line.

She’ll get deported, if she’s lucky, back where she came from, with a more permanent HoloBand injected into her neck—one that fuses with the top of the spine—to make sure she can never slip through the cracks. There are other scenarios, however, that don’t play out quite so well. But everyone’s telling themselves she’ll survive—and that, besides,
there should be consequences when you break the rules, damnit.

At least until the Inner Circle moves the goal posts again, and this time they fall outside the lines.

The guy’s HoloBand chimes ahead of me, the gate light flashes green, and he’s through customs. I’m up. I close my eyes, feel the beating in my heart for a moment, and center my thoughts. Then I square my shoulders, wear my biggest smile—the one that says,
hey, I see you
, and rummage through my pockets.

I bring my gaze up from the floor slowly, trying to catch the gatekeeper eye. The edges of mine widen, my features softening, as if I’ve seen the entrance to Shangri-La itself. I run a few quick calculations, redoing my assessment. She’s a vulnerable mark—now, I just need to identify the weakness.

I spot it, hanging around her neck: a simple silver chain.

“You’re a sympathizer, right,” I say, making no indication that I’m going to pull my jacket down and allow her to scan me.

She blushes, her hand almost immediately going to her throat, like I’ve threatened to garrote her. “I—I don’t know what you’re talking about.”

“Don’t tell me that didn’t have a cross on it, once upon a time,” I say, in a clandestine, conspiratorial whisper, “maybe it still does.”

“It absolutely does
not
,” she says. Her eyes are focused on the touchscreen pad in her little booth, as if that thing holds all the answers.

I shake my head, walking towards the still-locked turnstile. “A sympathizer working for the Circle. I can’t believe it.”

“Sir, you need to let me scan your HoloBand,” she says in a small voice. “I can’t let you through without a—”

“Okay, you can scan,” I say, standing still. With shaking hands, she takes hold of a gun-shaped tool, red beams of light streaming from its end, and rolls down the collar of my jacket. I feel the cool metal press up next to my neck. It beeps. Not the good chime. The warning chime.

But I stay cool and ask her, like I approached her in a bar, “What’s your name?”

“Carina.” There’s a long pause. The person on the screen doesn’t match who I am. I know.

I run my play. “You don’t wanna press that button. I’ll show you why.”

I reach into my pocket, and pull out the note, bringing my hand out slow. There’s an impatient buzz growing behind me—
why the hell is this taking so long
, everyone wondering—as I put the paper in her palm with a soft touch.

“I’m a friend.” Then, with a reassuring wink, I take my hand away from hers and say, “Tonight, at six.”

Carina’s eyes grow wide, and we hold a stare for a few moments. Then she reaches underneath her touchpad terminal to press a button. I hold my breath—I know I’m good, but you never can really know someone for sure until they make a move. I hear a click and wonder if it’s over. But it’s not the one that calls the hounds. Instead, she hits the manual override, for when a HoloBand can’t be properly scanned.

The light flashes green, and I walk through the turnstile, winking again. Then I’m swallowed up by the towering city. I hail an auto-cab and input the address. As it winds through the city streets, real nervousness sets in.

Because I’m about to see my brother for the first time in fifteen years.