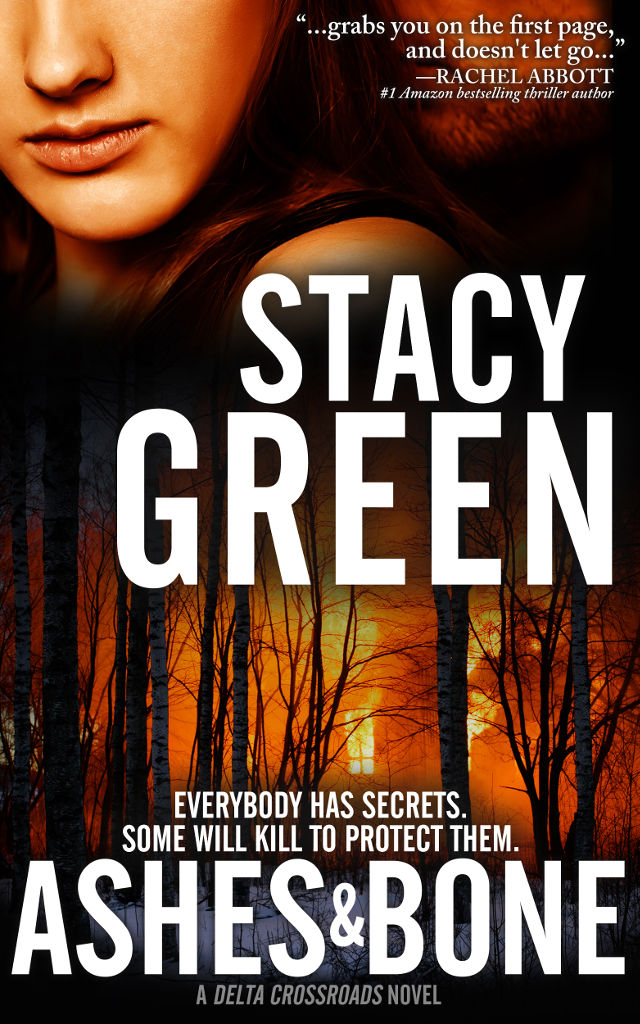 No part of this book may be reproduced, scanned, or distributed in any printed or electronic form without express written permission from the publisher. The scanning, uploading, and distribution of this book via the internet or any other means without the permission of the publisher is illegal and punishable by law. Please do not participate in or encourage piracy of copyrighted materials in violation of the author’s rights. Purchase only authorized editions.

This is a work of fiction. Names, characters, businesses, places, events, and incidents are either the products of the author’s imagination or used in a fictitious manner. Any resemblance to actual persons, living or dead, or actual events is purely coincidental.

Praise for ASHES AND BONE

Stacy Green has once again demonstrated her mastery of words, painting a stunning picture of a hot and sultry Mississippi town and skilfully creating all the tension you could wish for in this clever mystery.

—Rachel Abbot, #1 Amazon Bestselling Author of
Sleep Tight
and
The Back Road

Ashes and Bone, the final visit to Roselea, is a fast-paced whirlwind of a novel. Kidnapping, the Dixie Mafia, and Ms. Green’s usual cast of strong characters kept me turning the pages. What an explosive end to the Delta Crossroads Trilogy!

Other Books by Stacy Green

(Book One in the
Delta Crossroads
Trilogy)

(Book One in the Delta Detectives Series)

(Book One in the Lucy Kendall Series)

INTO THE DEVIL’S UNDERGROUND

who asked me to hold his drink seventeen years ago and changed my life.

Other Books by Stacy Green

A
distant rumbling,
like the footsteps of a marching giant, made gooseflesh sprout on Jaymee’s sweaty arms. Shadows crept over her shoulders. She cast a cursory glance out of the master bedroom’s bay window. A wall of fat, menacing clouds approached from the north. Her stomach knotted. Time to wrap this up.

Skin gritty with dust and hands aching, she’d been battling with the antique chifforobe for the better part of ten minutes.

Jaymee huffed a piece of hair out of her face and glared at the piece of antique furniture occupying the corner of her bedroom. Half chest of drawers, half hanging closet, the chifforobe was stained with ghostly rings, remnants of objects that had sat on the top over the past century. She ran her fingers over the cracked base and wondered if her friend Dani would be able to fix it before the frame collapsed. Two musty-smelling, hand-sewn quilts sat on the bottom of the closet side, while the drawers stood empty except for the old contact paper lining them. She’d been told her great aunt purchased the chifforobe in 1910 out of the Sears Roebuck catalog. It was next on her list of items to have Dani restore, but the chances of the thing surviving today were slim.

“Damn you, open.” She yanked hard on the door. It had never stuck before, but it had been a humid week, unusual for this time of year. February in the Delta Crossroads of Mississippi was supposed to be nature’s calm before the spring storm. Plants pushed their way through the soil, and the trees budded with new life, but the invigorating smell of spring renewal made Jaymee feel restless.

Tourist season approached, and for some insane reason, Jaymee had decided to put Magnolia House on the Roselea Heritage Tour of Historic Homes. So like the rest of the town, she was head-deep in frenzied preparation for the affectionately coined “Yankee Invasion.”

A gust of wind rushed through the window, the sky’s angry growling increasing. Mutt shot up from his cushy spot on her bed and began to snarl.

Jaymee’s already frayed nerves hovered on the edge of pissing her pants. In just two weeks, she would open the doors to Magnolia House for the tour, and she felt petrified. The last thing she needed to deal with was a thunderstorm.

The stubborn door jiggled, teasing her, and then promptly snapped shut again.

“Mutt, bring me the hammer.”

He focused on the encroaching clouds, the tuft of thick hair at the back of his neck standing up.

“Why won’t the thing just frigging open?” She braced her feet and gave the knob another pull. The chifforobe rocked forward, and Jaymee teetered on her heels. For a split second, she thought she was going down and the antique with her. Then it righted itself and the door popped open, nearly smacking her in the face. The wooden knob remained in her hand.

The door’s problem was obvious: a cardboard box sat on top of the quilts, wedged against the door hinges. “Where did that come from?”

She could hear her friends now. Cage would say the Magnolia House ghost was toying with her. Like most historical homes, Magnolia had its dark moments. Jaymee knew of the rumors one of her ancestors had hung himself in the 1850s after his wife died in childbirth. Naturally, her best friend Dani latched onto the story and wanted to research, but Jaymee put her foot down. Living mostly alone in the big house was enough. Creaks, pops, and breathy sighs in the wood were an everyday occurrence. Jaymee didn’t need confirmation of a nasty death to make her imagination worse.

Besides, she recognized the handwriting scrawled in red marker across the side. “Research.” Her boyfriend must have stuck the box in there and forgotten to tell her about it. Jaymee supposed she should mind her own business, but this was her house and her stuff, and she was never one to not snoop.

She expected to find papers, notes of gibberish only Nick could read. “What the hell is this?” She picked up a Ziploc bag and peered at it. Inside she saw several rusty items that looked like they’d recently been dug out of the dirt. They resembled buttons and possibly a belt buckle, along with a triangular piece of skinny metal she didn’t recognize. She played with the zipper, debating on looking closer. But opening the bag would likely mean taking pictures, which she’d then send to Dani, who’d call, and then they would end up on the phone for an hour. Jaymee really needed to keep working. Her personal D-Day was rapidly approaching.

As if someone had draped a thin blanket over the afternoon sky, the last rays of meager sunlight disappeared. Jaymee put the bag back in the box and hurried to the bay window in the center of the room. The northwest sky glowed with gray and foreboding clouds piling on top of each other as though they were in a wrestling match.

Fabulous.
Another rumble of thunder sent the dog into a fit of barking. Mutt jumped off the bed and joined Jaymee at the window. Paws on the sill, he growled at the threatening storm.

“Settle down.” Jaymee patted his head. “Get your paws off the woodwork. And stay off my bed.”

Mutt gave another low growl and then promptly returned to the middle of her four-poster. He settled into his spot, head on his paws, and wagged his tail. She swore she could see the challenge in his mismatched eyes.

“I’m going to send you back to the trailer park one day.”

He rolled over on his side, utterly unthreatened.

Her cellphone began to ring with her boyfriend’s ringtone. She jumped to answer it. “Hey. Speak of the devil.”

“Really?” Nick sounded out of breath. “Were you talking about me?”

“I was thinking of you.”

“Very dirty.” She dropped her voice low, pictured Nick’s excited face and held back a laugh. “Covered with it, in fact. Inside a plastic bag.”

“Did you put a cardboard box of stuff in the chifforobe and forget to tell me?”

“Shit.” His playful tone evaporated. “Yes, I did. They’re Civil War artifacts. I bought them at that online store I told you about. I thought they’d be a good addition to the house for the tour, but I wanted to see if they were authentic first.”

Jaymee’s insides still twisted into knots every time she thought about opening up her inherited home for the first time to tourists. “We can have Dani look at them.”

“No.” Nick’s harsh response surprised Jaymee. “I mean, not yet. I’d like to find out a bit more about them first.”

“Okay,” Jaymee said. “Are you all right? You sound tense.”

He laughed, but it sounded stunted, bordering on fake. “Just a bit. I’m on my way to Roselea. Should be there in less than an hour, if the storm lets me. It’s followed me from Jackson. Sucker’s pretty bad.”

“It’s been creeping in on us all day.” The knot of nerves between her shoulders eased at the sight of seeing Nick. Holing up together sounded like the perfect way to forget about the Heritage Tour and strangers tromping around in her house. “Why didn’t you tell me you were coming this weekend?”

A crack of thunder came through the speaker. “Jesus. Maybe you should pull over.”

“I may have to if the wind keeps up. But there’s no rain, so I can see. And yeah, things are okay. I just need to come down there.”

She knew the tone. Her brief giddiness bottomed out. “You’re working on a story.”

“What makes you say that?”

“Because if you were coming to see me, you would have said that. I’m surprised your editor let you go.”