Read As Luck Would Have It Online

As Luck Would Have It 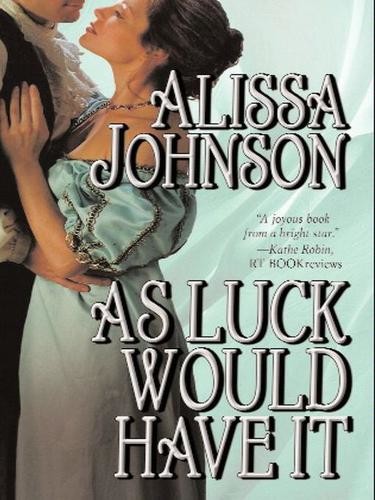 As Luck
Would Have It

For Katherine Jane Johnson,
because you were the first to believe.

“I agree to the arrangement.”

“Excellent. I suggest we seal the pact with—”

“A handshake?” she offered helpfully.

His gaze tracked down to her lips. “I was thinking of something a bit more binding.”

“What? No, a kiss. Where do you get these ideas? You’d prefer a blood letting over kissing me?” he asked in bemusement.

“A minor pin prick would suffice,” she pointed out reasonably. “I have a hat pin in my reticule that will do nicely.” Sophie reached into her bag and withdrew her weapon with a flourish.

He dropped her hand. “You have succeeded in ruining the moment. Put the pin away, Sophie, we’re about to arrive at your front door.”

“Oh!” She began making futile attempts to straighten her disheveled appearance. “Thank you for everything, Alex,” she said sincerely, if a bit distractedly. She crammed her mostly crushed bonnet atop her head and tied the ribbons in a limp bow beneath her chin. “How do I look?”

Alex took her face in his hands and kissed her. He didn’t have time for anything more than a brief but passionate pressing of his lips to hers. But it was enough to heat his blood and render her breathless. He nipped her bottom lip playfully, then kissed her gently on the brow.

“I thought you said I had ruined the moment,” she whispered.

“A seductive debut filled with rapier-sharp repartee, passion and espionage.”

I
n the years to come, it would be said that the Duke of Rockeforte had died well. Very well indeed.

At the moment, however, His Grace was far less concerned with the manner of his death than with the notion that he was, as yet, still dying—as opposed to being fully dead—which indicated he might have the time for a few final words. And because his dear friend, the sole witness to his untimely demise, looked so damnably glum, one last spot of fun as well.

A warm hand covered his own. “Save your strength, Rockeforte.”

“I have been, and for this very bit.”

“The bit where the dying man wrings…tremendously inconvenient promises from…whomever happens to be nearest.”

His friend smiled at that. “Tell me what to do.”

“My children…look after them.” He paused and gave a weak laugh. “The look on your face, old man…. Don’t worry, I know I have but one son…. Not hearing harps yet.”

Rockeforte’s face twisted with a pain that had nothing to do with his wounds. “Yes, Alex…. He’ll be alone now…. He’s already…too serious by half…. See he takes the time to enjoy life, to be happy.”

“The others…” He coughed and wiped away a bubble of blood. “Not children of my flesh and blood…but of my heart.”

“The Coles, you mean, and Miss Browning?”

Rockeforte gave a small nod. “Whit must look after his family…. He’ll never forgive himself if he…ends up like his father. And little Kate…needs to follow her gift…for music.”

“Their cousin Evie…life will not be easy for her.”

“I will do my best to smooth her path.”

“That little imp Mirabelle…sharp tongue, but…”

“I know you will…. Thank you…. No men left in the family…. Whit’s father…doesn’t count.”

A stream of blood trickled from Rockeforte’s nose. His breathing became more erratic, his voice softer.

“One last thing…. Promise me…”

His friend leaned down to catch the whispered words.

Then straightened so fast his head spun. “You want me to
what?
”

I
t was the general opinion of those who had the pleasure of her acquaintance for more than a fortnight that Miss Sophie Everton had the most extraordinary luck of any human being in living memory.

It was also agreed to be a shame, really, that said luck did not limit itself to being of the beneficial variety, but was remarkable instead by its consistency and balance.

Sophie’s experiences with providence ranged from the mundane to the miraculous to the catastrophic. But without fail every windfall was paid for with disaster, and every misfortune was tempered with a boon.

By four-and-twenty, Sophie had nearly become someone’s seventh wife, been lost in a South American jungle, and been shot straight through the arm with an arrow launched by a drunken hunter.

In return, she had been saved from unwilling participation in matrimony by the unexpected death of the presiding wise man (her betrothed could not help thinking this was something of a bad omen and gave her half a dozen healthy goats just to go away), had inadvertently stumbled across a previously unknown—and fortuitously friendly—tribe in the jungle, and had inherited a rather lovely town house in a fashionable London neighborhood—deeded to her upon death by the childless and remorseful archer.

Such an existence would likely reduce most young women to a state of perpetual hysteria. Being of sound mind, reasonable
intelligence, and, oh very well,
slightly
reckless nature, Sophie considered it a wondrous, if occasionally messy, life of adventure. It was also, she was wont to point out, wholly unavoidable. As such, she found it advantageous to keep a smile on her face and a wary eye on the world.

Much as she was now smiling warily at the gentleman sitting next to her on the deck of
The Sailing Diamond
. Easily in his late sixties, with endearing gray eyes and a mass of white hair tied at the nape of his neck in a style two decades out of fashion, the man reminded Sophie of her father.

It was to be noted, however, that her father was
not
currently onboard the ship that would, in two hours’ time, deliver his daughter to English soil for her first visit in nearly twelve years.

This man of the kind eyes and unfortunate hair had been a complete stranger until five minutes ago.

And a very strange five minutes it had been, she mused. She’d snuck out from under the nose of her much loved, but often exhausting, chaperone in the hope of finding a moment of solitude. Before she’d had the chance to so much as fully settle herself comfortably on a bench, this odd little man had sat down and pressed a letter into her hand. A letter bearing the seal of the Prince Regent. Then he’d gone on to introduce himself as Mr. Smith and asked her, in the name of the Crown, to please accept a mission of colossal national import. To which she now replied:

Mr. Smith waited patiently for additional comment. When none appeared forthcoming, he tugged at his wrinkled waistcoat and narrowed his wrinkled eyes.

“I say, Miss Everton,” he began, “you seem to be taking this all rather well. I hardly expected a swoon, mind you, or some sort of fit, but I find myself surprised you’re not a bit more…well…”

Sophie cocked her head in interest. “You must have done some research into my background before approaching me,” she pointed out reasonably.

“As it happens, I did hear a great many stories about you,” Mr. Smith chuckled. “They were so unlikely, however, that I attributed them to someone’s overzealous imagination.”

“It’s possible they were,” she conceded, “but the truth has proved interesting enough in the past to negate the necessity of dramatic embellishments.”

He gave her a humoring smile. “Really? Were you truly cornered just last year in an open-air market by a Bengal tiger?”

It was Sophie’s turn to laugh. People rarely believed the tales of her adventures, but she did so enjoy telling them. There was a curious sense of satisfaction to be obtained from their reactions, which generally ranged from delighted to horrified. Never was there a doubt, however, that the listener was entertained.

“Oh, yes,” she replied with no small amount of relish. “And if you had any desire to see me surprised, you should have been there. After Mr. Wang distracted the beast with some raw meat and a great deal of noise, I indulged in a rather embarrassing display of hysterics. Have you ever seen a tiger, sir?” she inquired. “They really are enormous.”

Mr. Smith blinked rapidly for a few moments—which she found gratifying—then coughed and peered at her as if he had just noticed something that intrigued him.

“Do you know,” he said finally, relaxing his gaze and actually smiling at her, “I rather think you’re perfect for this mission. You should do quite well. Quite well indeed.”

“Well,” she responded, suddenly feeling a little lost. “I’m happy to have your good opinion of course, but I must remind you that I have absolutely no idea what this mission entails or whether I shall agree to undertake it.”

Mr. Smith patted her hand congenially. “Nothing to it, my dear. Nothing to it. You will, I presume, be residing at your cousin’s town house upon arrival?”

“It’s my town house, actually, but yes, I will be residing there with Lord Loudor.”

“Excellent. Excellent. And are you very well acquainted with His Lordship?”

Sophie narrowed her eyes in suspicion. “We’ve kept up a fairly regular correspondence. He’s been responsible for the management of my father’s estate since we left England.”

Carry On by Rainbow Rowell
Vampire U by Hannah Crow
The Young Apollo and Other Stories by Louis Auchincloss
The Real Thing by Cassie Mae
What a Girl Wants by Lindsey Kelk
Project Reunion by Ginger Booth
A Song to Die For by Mike Blakely
Jesus' Son: Stories by Denis Johnson
Beautifully Used (The Beaumont Brothers Book 2) by Griscom, Susan
Misery Loves Cabernet by Kim Gruenenfelder