Arik - The Life Of Ariel Sharon 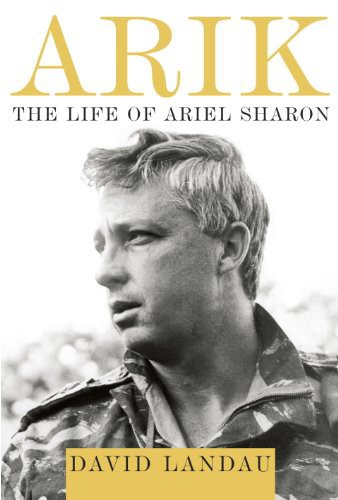 THIS IS A BORZOI BOOK
PUBLISHED BY ALFRED A. KNOPF

All rights reserved. Published in the United States by Alfred A. Knopf, a division of Random House LLC, New York, and in Canada by Random House of Canada Limited, Toronto, Penguin Random House Companies.

Knopf, Borzoi Books, and the colophon are registered trademarks of Random House, LLC.

Owing to limitations of space, permissions to reprint from previously published material are listed following the index.

For Jerrold
The righteous, in death, are called living.
—Talmud

M
y grandfather was a Hebrew teacher in Rehovot at the beginning of the last century.” Ariel Sharon, corpulent, white-haired, looked up over his reading glasses at the half-full Knesset, the Israeli parliament. Members were listening politely or quietly reading. “I have a deep love for the Hebrew language,” he read on in his incongruously high-pitched voice. “For the miracle of its revival, for the historical wellsprings from which it draws its words and phrases.”

There was no tension in the chamber that afternoon in January 2005. No catcalls, no heckling. A parliamentary moment without politics. Sharon could have asked one of his two deputy prime ministers to represent the government at the largely ceremonial debate marking Hebrew Language Day. But he wanted to speak himself. He had a point to make.

Mordechai Scheinerman, Sharon’s grandfather, came to Palestine in 1910 and settled with his wife and children in the still-tiny Jewish village of Rehovot, southeast of the barely existent Jewish town of Tel Aviv. That made him sort of aristocracy. Not quite a
Mayflower
man of the First Aliya (1882–1902), but still an early Zionist pioneer of pre–World War I days. Palestine was a derelict corner of the crumbling Ottoman Empire then. The dream of the Zionist visionary Theodor Herzl (d. 1904), that it would one day become a Jewish state, seemed just that: a dream.

In his native town, Brest Litovsk in White Russia, Mordechai was an early convert to Zionism. He became a Hebrew teacher. That was a career choice reflecting real commitment. Hebrew, the ancient language of the Bible and the rabbis, was struggling to reincarnate itself as a modern vernacular. The Zionists promoted it as the language of the new-old Jewish nationalism. But the Zionists themselves were a struggling minority within the Jewish people. Millions of Jews, fleeing
czarist oppression, set sail for the New World rather than for sandy, sweaty Palestine.

Mordechai Scheinerman endured the heat and mosquitoes of Rehovot for two years, then packed up, as did so many of the early pioneers, and headed back to Brest Litovsk. When war broke out, the family fled east, ending up in Tbilisi, Georgia. His faith in Zionism never wavered, though, and he instilled it in his son Samuil. Samuil Scheinerman taught Hebrew too, but, chastened by his father’s experience, he studied agronomy at the local university as a practical preparation for his own eventual aliya.
a

This came more quickly than planned. Walking toward the Tbilisi Zionist club, where he held his Hebrew classes, one night in 1921, he found the area swarming with security police of the newly formed communist government. He veered away, hastened to the home of his girlfriend, Vera Schneeroff, and offered her two peremptory proposals: marriage and aliya. She was a fourth-year medical student, the daughter of a well-to-do Jewish family, also from Belarus, and, by her own admission, not much of a Zionist. But she accepted Samuil’s plan. They were married forthwith and fled to the Black Sea port of Baku, from where, some months later, they embarked for Palestine.

Samuil had completed his studies in Tbilisi; Vera nursed the hope that she would graduate someday too, perhaps at the University of Beirut since there were no universities or medical schools in Palestine. On a bleak February day in 1922 they arrived in Jaffa. Vera, to her consternation, was lifted bodily from boat to shore by a gigantic Arab stevedore. The experience confirmed her general impression of Palestine as a backward and uncouth place.

By then, the Zionist dream had advanced a little closer to reality, at least on paper. The wartime British government issued its Balfour Declaration in November 1917, favoring “the establishment in Palestine of a national home for the Jewish people.” In 1920, the San Remo Conference of principal Allied powers granted a mandate over Palestine to Great Britain, specifically enjoining it to “put into effect” the Balfour Declaration.
b
But beyond emotional rhetoric, the response among Diaspora Jewish communities was disappointing from the Zionist standpoint. The Zionist movement campaigned hard to persuade
young Jewish people to make aliya. It achieved only modest success.

His son’s aliya, and his own subsequent return to Eretz Yisrael—Mordechai Scheinerman lived out his last years in Tel Aviv—restored the old Hebrew teacher’s right to a place of honor in the annals of the Zionist enterprise. A century later, his grandson pointedly read the family narrative into the record of the Zionist state’s parliament. His Zionist credentials, Sharon was signaling, were unimpeachable.

The point was not superfluous. The momentary calm in the Knesset was deceptive. Parliament and the country were seething with disaffection. It was spearheaded by the Jewish settlers in the occupied
c
Palestinian territories of the West Bank and Gaza, who defined themselves as today’s true Zionists. It was directed against Sharon, who for long years had been their champion but whom they now portrayed as a traitor. To many, the atmosphere was reminiscent of 1995, when Prime Minister Yitzhak Rabin was decried by the national-religious Right as a traitor and eventually felled by an assassin’s bullets.

Rabin died for signing a peace accord with Yasser Arafat’s Palestine Liberation Organization (PLO). That agreement held out the prospect of a Palestinian state eventually arising alongside Israel, thus bringing the century-old conflict over Palestine to an equitable end. But Arafat, once Rabin had gone, proved incapable of leading his people to peace. A decade later, the two-state solution was foundering in a welter of bloodshed and failed diplomacy.

Ariel Sharon, the hard-line ex-general who had been elected prime minister in 2001 to crush the Palestinians’ intifada, now proposed to dismantle Jewish settlements and withdraw Israeli troops from parts of the occupied territories. To the settlers and their supporters—his erstwhile political constituency—that was heresy, a denial both of Judaism and of Zionism. To the peace camp at home and to governments and public opinion around the world, Sharon’s dramatic turnabout was a hugely hopeful change. It meant the beginning, at last, of a repartition of Palestine between the two nations vying for it. Sharon found himself suddenly praised where he had previously been loathed and feared.

He looked back to his text. “Eliezer Ben-Yehuda, the man who revived the Hebrew language, said: ‘There are two things without which the Jews will not be a nation—their land and their language.’ ” The subtext was clear. He, the old warrior turned statesman, the
true-blue Zionist, could be depended on to protect and defend both of those pillars of Jewish nationhood. The imminent withdrawal from parts of Palestine would strengthen, not weaken, the future of the Jewish state.

H
alf a year later, in August 2005, the withdrawal took place. Israel evacuated its settlers and its army from the Gaza Strip and from a small area of the northern West Bank. Sharon called it “disengagement.” The settlers called it “uprooting” and “expulsion,” terms taken from the most macabre chapters in Jewish history.

But the settlers’ threats of violent resistance, of massive civil strife, and of rebellion in the army melted away in the face of Sharon’s iron will. He deployed forty thousand soldiers and policemen around the doomed settlements and won the day without a battle. Not a shot was fired. Resistance was almost all passive. In one settlement a few young militants hurled paint balls from a rooftop. It was all over in hardly more than a week, and the country resumed its interrupted summer vacation.

The anticlimactic absence of trauma raised Sharon’s stock even higher both at home and abroad. Israel’s misguided colonization of the Palestinian territories, which Sharon himself had done more than any man to put in place, was neither immutable nor irrevocable, as many had feared. Sharon had shown it could be undone with relative ease, if only there was the political will to undo it. The Palestinians could still have their state. Israel could still save itself from the morally and politically crippling sickness of occupation. It could recover its identity and its cohesion as a Jewish and democratic state.

That bright moment of hope that Ariel Sharon created in the summer of 2005 still shines, though the powerful forces in both nations who oppose the two-state solution have conspired to obscure it. Sharon’s collapse in January 2006 into a stroke-induced coma has forced Israeli history into the subjunctive mode: Had he survived in power, would he have been able to complete the decolonization process that he boldly began?

Virtual Strangers by Lynne Barrett-Lee
Exclusive by Eden Bradley
Sophie's Throughway by Jules Smith
Queen Bitch of the Callowwood Pack (Siren Publishing Classic) by Siobhan Muir
A Stranger in the Mirror by Sidney Sheldon
Lucky Man by Michael J. Fox
The Flood-Tide by Cynthia Harrod-Eagles
Kiss and Tell by Fiona Walker
Beauty and the Blitz by Sosie Frost
Firecracker by Desiree Holt