Aprons and Silver Spoons: The heartwarming memoirs of a 1930s scullery maid 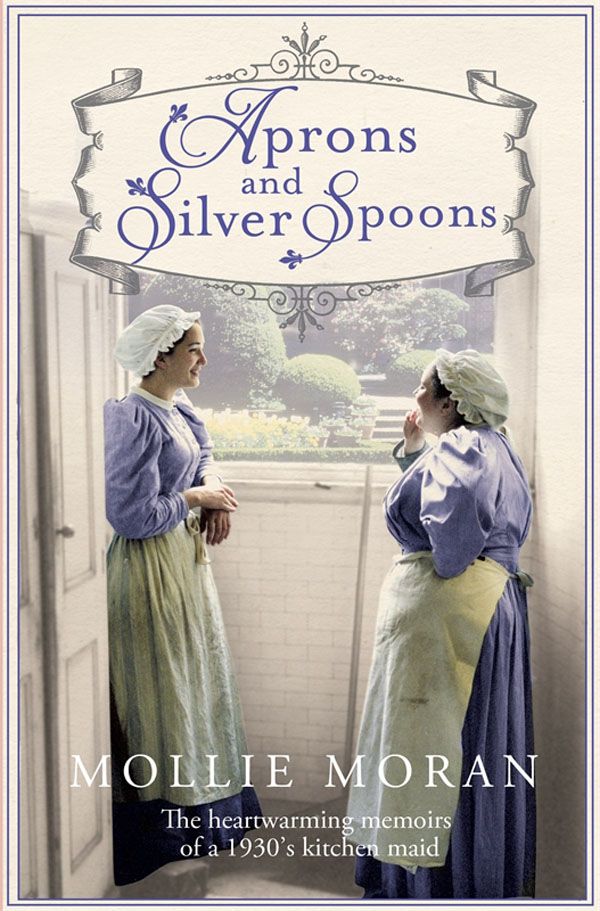 Tips From a 1930s Kitchen – Bread and Butter Pudding

3. Tears in the Scullery

Tips From a 1930s Kitchen – The Perfect Roast Beef

Tips From a 1930s Kitchen – Soup to Scrub Floors On

7. Passion With the Footman

Tips From a 1930s Kitchen – Trifle and Brandy Snaps

Tips From a 1930s Kitchen – Proper Fish and Chips

Born in 1916, Mollie Moran is now ninety-six and lives on Bournemouth seafront. She regularly hosts Scrabble parties and cooks for up to twenty-five people. Mollie grew up in Norfolk, and was sent to London as a scullery maid at the age of fourteen. She remains friends with the kitchen maid, Flo, from the first household she worked in, more than eighty years later.

I dedicate this book to my late mother, Mabel,
and all my family.

Sweet was the walk along the narrow lane

At noon, the bank and hedge-rows all the
way

Caught by the hawthorns from the loaded
wain,

Which Age with many a slow stoop strove to
gain;

Inching higher and higher, I used every
fibre of my being to pull my body further up the tree trunk. Just one more foot and
I’d be there. The prize was in sight and it was worth its weight in gold.

Come on, Mollie Browne, you can do it.

With a superhuman show of strength and a
grunt I swung my leg over the branch and sat gasping for breath.

I’d climbed to the very top of the
tallest oak tree in the village.

It started as a tingle in my chest and soon
spread to the
tips of my fingers. Joy flooded my body. I’d
done it. I’d only gone and done it. No one had climbed this tree, not even the
bravest lads in our village.

‘Sissies,’ I chuckled to
myself. I may only have been a ten-year-old girl, but I was more of a man than any of
them.

My mother Mabel’s warning, issued
just before I left the house that morning, rang in my ears: ‘Come straight
home from school and don’t be scuffing your shoes or ripping your dress
climbing trees on the way. And don’t you be nicking all them eggs out the
nests again. I mean it, Mollie Browne, any more trouble and I’ll swing for
you, I will.’

I looked down at my ripped cotton dress.
Oops, too late. And by the way the sun was dipping down below the spire of the church I
could tell dusk was gathering.

I hesitated. What were rules for if they
weren’t to be broken?

The thought of the telling-off I was going
to get melted away when I realized I could see for miles around the tranquil landscape.
What a thrill. It was like discovering a secret magic world; just me and the birds in
the twilight. Fields dotted with ancient flint churches stretched out as far as the eye
could see. In the distance I could make out the town of Downham Market and just beyond
that the sun glittered off the River Great Ouse.

The year was 1926. Coal miners were
striking, John Logie Baird had just given the first public demonstration of the
television and Gertrude Ederle had become the first woman to swim the Channel. These
were exciting times. London was in the grip of the ‘Roaring
Twenties’.
Bright young socialites wore their hair in bobs,
their skirts short, and were dancing up a storm in jazz clubs. Their louche and
provocative behaviour was blazing a trail across the front pages.

Here in gentle Norfolk it was a different
story.

A tractor rumbled in the middle distance,
ploughing straight lines through the soil. Fields of wheat and barley rustled gently in
the breeze. All was still, quiet and timeless.

This was my world. Mollie Browne’s
world. One giant playground full of adventures just waiting to be had. But even as I
surveyed the peaceful landscape I felt the strangest sensation grip my heart. My destiny
didn’t lie here in the sleepy villages, forced into a dull apprenticeship
before being married off to the local farmhand. No, thank you. There had to be more to
life. I wasn’t sure what yet but – sure as eggs is eggs – I would find a way
to make it happen.

At the thought of eggs, I suddenly
remembered the reason why I was up this big old tree in the first place. Wiping the
sweat off my brow, I forced myself not to look down and edged along the gnarled branch
to claim my prize. Two perfect brown speckled eggs were sitting in the nest within
touching distance, still warm from when the crow had hatched them.

I wasn’t daft. I’d never
pocket a wren’s or robin’s egg. Everyone knew bad luck would come
your way if you nicked those and your hands would fall off. Happen there be no harm in a
crow’s egg, though.

Just then a sharp whistle sounded from
below.

My partners in crime!

I could just make out the faces of Jack and
Bernard.

Oh heck. There was no time to pocket either
of the shiny brown eggs. Instead I shimmied down that tree faster than a rat down a
drainpipe. With a loud thud I landed slap bang in front of the black laced-up leather
boots of one PC Risebrough. My nemesis. I swear that man spent his whole time roaming
the countryside looking for me. He always seemed to know just where to find me!

‘Mollie Browne again,’
he said in his thick Norfolk accent. Slowly he shook his head. ‘If
there’s trouble to be found it’s always you in the thick of it,
ainch ya? When will yer learn?’

Last summer he’d caught me with
handfuls of stolen strawberries. There’d not been a soul about, until the
sight of his tall hat bobbed past over the top of the hedge. He’d clouted me
so hard round the lugholes that my ears had been ringing for weeks.

I shook my head as I saw Jack and Bernard
turn on their heels and leg it. ‘I was just mucking about,’ I said,
shaking my red curls vigorously. ‘’Avin’ a gorp from the
tree.’

He peered down at me, narrowed his eyes and
slowly and deliberately peeled off his gloves. ‘Tha’s a lotta
ol’ squit,’ he said. ‘Stealing eggs you was. I oughta box
your chops.’

Two minutes later, and with my ears ringing
from another clip, I ran for home.

‘Any more trouble and
I’ll be letting your father know,’ PC Risebrough shouted after me.
‘Now git orf wiv yer.’

My heart sank as I raced off down the
fields. Not again.
He was forever catching me doing things I
shouldn’t and my father was forever telling me off. I didn’t want to
trouble Father, not in his condition, but trouble just seemed to seek me out.

I ran so quickly across the fields and lanes
that the bushes became a blur of green. I could run in them days. I was so strong and
fast it wasn’t true. So fast that at times I felt I could have flown clean
over the hedgerows like a swallow, swooping and soaring.

At the end of the lane that led to our
tumbledown cottage I paused and looked back over the fields. Dusk was sneaking gently
over the village and soon the fields would be cloaked in a velvety darkness. Smoke
curled gently from the chimney pots and suddenly my tummy rumbled. I thought of bread
and dripping by the fire, or if I was lucky we might have a bit of meat in a steak and
kidney pudding. Machine-gunning my way up the lane that led to our smallholding, I
startled a blackbird that flew chattering from the hedgerow. My heart soared as I ducked
through the hedge and crept down the back garden. It was Monday, washing day. Mother
would be too busy to notice I was late for tea.