Read Angel In The Saloon (Brides of Glory Gulch) Online

Angel In The Saloon (Brides of Glory Gulch) 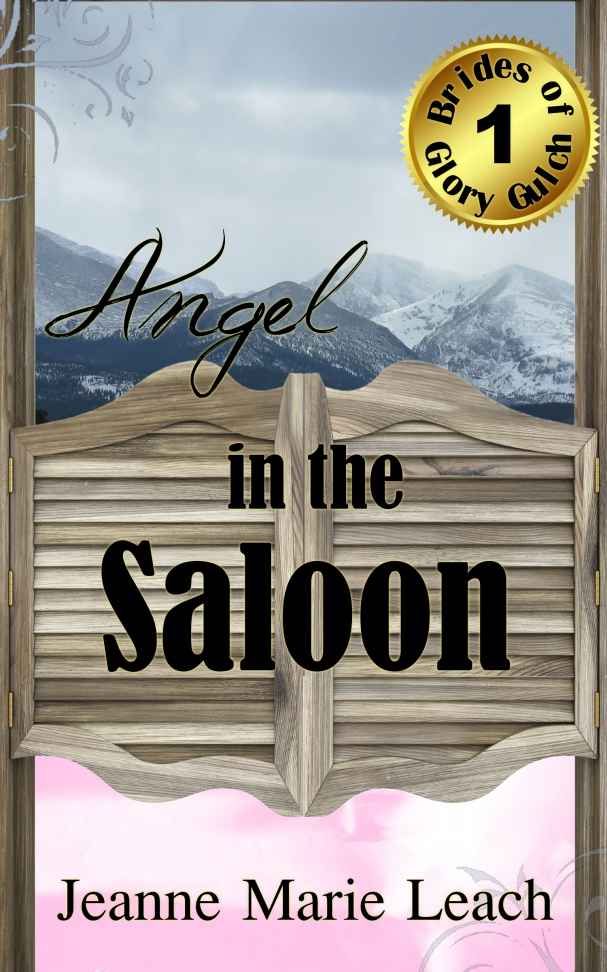 ANGEL IN THE
SALOON

Scriptures used in this book are
quoted from the King James Version of the Holy Bible.

To David, my husband of almost
thirty-eight years. You are my proof that love at second sight can result in a
long and meaningful relationship. Thank you for your encouragement and support,
and for believing that I could attain my goals and dreams. I love you as high
as the sky!

“Excuse me, Ma’am. Are you Miss Corrin Dannon?” the
short man inquired.

“Yes, I am.” She had been leaning against the bar, her
face resting in the palm of her hand. Her private daydreams interrupted, Corrin
went back to work washing and drying the glasses from the reveling crowd that had
sought their merrymaking in her saloon the previous night.

“May I inquire,” the man continued as he wiped his
narrow brow with his well-worn handkerchief. “Do you have a sister?”

“Yes, I have a sister. But we haven’t spoken in over
twenty years. I don’t know where she is---nor do I care.” A lot of men have
tried unusual approaches to get her attention, but this odd, little man with
his small, wiry frame and thinning hair didn’t stand a chance with her. Corrin
was certain forty wasn’t as unkind to her as it was to this fellow.

“And what is your sister’s name?”

“Her name is Grace. Why all these questions?”

“It’s my line of work, Ma’am. I apologize for taking
up your time. However, when I’m finished I’m sure you will understand the
necessity of this line of questioning. Now, are you aware of your sister ever
having been married?”

“Who are you? Is my sister in some kind of trouble? I
already told you,” Corrin didn’t bother to hide her annoyance. “We haven’t
spoken in over twenty years. Why trouble me with all of this?”

“Oh, I apologize. You’re quite right. Introductions should
have come first.” The man’s demeanor softened somewhat.

“It’s just that I’ve been away from home for some time,
and I’m so near my journey’s end that I’m afraid I’ve become over anxious to
conclude my business.” The gentleman bowed slightly toward Corrin. “Percival
Johnston at your service, Miss Dannon. Now, if you would indulge me by
answering a couple more questions I should be able to clarify my purpose
momentarily. Are you aware of your sister ever having been married?”

“Yes. That’s why we haven’t spoken for so long---it’s
a family matter.” Corrin frowned. He really was asking about her sister. She
certainly was in no mood to be dredging up those bitter memories.

“What was her husband’s name?”

“Well, that’s good enough for me!” Mr. Johnston
actually smiled for the first time. “Miss Dannon, I think you had better sit
down.”

“Why? Has something happened to Grace?” She followed
him to a table in the corner of her saloon and impatiently flung herself into a
wooden chair across from him.

“I’m afraid I must be the bearer of bad news. You see,
your sister had been ill for some time and passed away quietly about four
months ago. I am the executor of her last will and testament. It has taken me
this long to locate you.”

Although she and her sister had been estranged these
twenty years, Corrin was saddened by the news. Feelings of regret, guilt and
disappointment churned inside her.

The business men meeting at a nearby table stopped and
looked across the room at her. These were dear friends, and she knew they’d
come to her aid at the mere nod of her head. She looked away from them—needed
time to process what she’d just learned.

“Unfortunately, Mr. Jackson passed away heroically
during the War, which left your sister to care for their handicapped daughter
alone these past seventeen years.”

“Grace has a daughter? Where is she now? And what’s
this about a handicap?”

“Miss Dannon,” Mr. Johnston said, scowling. “We’ll get
through this much quicker if you would just allow me to continue in an orderly
manner. Your sister managed to make a nice living for herself and her daughter
by becoming a fine seamstress. But about eighteen months ago she took to her
sick bed, too weak to do anything. What little money she had been able to save
went toward medical bills and putting food on the table. So I am afraid that
there isn’t anything left of her estate, except Miss Amelia.”

“Miss Amelia? Oh, I guess that must be Grace’s
daughter. Well, if there isn’t anything left of her estate why are you telling
me all of this? Wouldn’t a letter have sufficed?”

“Yes, Miss Amelia is Grace and Alister Jackson’s
daughter. And your sister made it quite clear on her death bed that she wanted
you
to take care of her after her passing.”

“Now wait just a minute!” Corrin bolted to her feet. “If
you’ve come here to tell me that I’ve just inherited my sister’s daughter, well
you’ve got another thing coming to you, Mr. Johnston! I have a business to run
and I can’t be running after some kid all day long. And you didn’t answer my
question about this handicap of hers.”

“Blind!” Corrin interjected as she narrowed her eyes
at the small man.

“She’s quite capable of doing many things for herself.
She just can’t do certain chores around the house that involve starting fires---or
using knives---things of that nature.”

“Oh that’s just wonderful! I’ve not only inherited a
kid I didn’t even know existed, but she’s blind! Just how am I supposed to do
this by myself?”

Mr. Johnston stood, pushed his glasses up on his nose
and leaned forward with his small, soft hands planted firmly on the table. He cool-headedly
glared directly into Corrin’s stormy blue eyes. “Your sister did it. Miss
Amelia was Mrs. Jackson’s most precious possession and she wouldn’t entrust her
to just anyone. She wanted you to have Amelia because you are family, and the
two of you were all she had left in this world. Despite the problems between
you, your sister was sure you would be able to give her daughter the love she
needed at a time like this. She knew it would be tough, but she told me you are
a tough lady.”

Mr. Johnston straightened his short frame as far as it
would allow. “I’ve been working for nearly four months to execute Grace Jackson’s
last will and testament. I’m tired and I want to go home to my own family. You
feel like you’ve got no choice in the matter, well neither has Miss Amelia. She
has no money and nowhere else to go. If things don’t work out, you could send
her to an institution for the blind and you’d be rid of her. But for now, I am
compelled to place her in your custody. So, if you would just sign a couple of
papers I can be on my way.” Mr. Johnston fumbled through a black satchel which
he placed on the table in front of him.

Corrin looked pleadingly toward her two dearest
friends who had been watching the incident from the businessmen’s table ever
since she stood and shouted, but after Mr. Johnston’s last dissertation, she
knew what she had to do. She signed the custody papers in excruciating silence.

“Thank you very much, Miss Dannon. This copy is for
your records.” Mr. Johnston smiled and handed Corrin the documents, which she
snatched from him and glared at incredulously. He folded his own copies and
placed them confidently back into the satchel. “Now, if you will excuse me, I
will get Miss Amelia and introduce her to you.”

“Yes, she’s outside on the porch.” Disappearing out
the front door, he left Corrin still standing at the table, mouth gaping,
trying to comprehend the impact of what had just occurred. With the simple act
of signing her name to some official looking documents, her familiar life had
unraveled, an unwelcome and unwanted change.

Paul Strupel adjourned the businessmen’s meeting, but
he and Jeremiah Cowan didn’t leave. Corrin knew they would never leave her
alone when she was distressed. When they walked over to where she stood, Paul
put his arm around Corrin’s shoulder and gave her a firm squeeze.

“You won’t be alone in this, Corrin,” he assured her. “You’ve
got a lot of friends who’ll be glad to help you out. We’ll figure this out
together.”

The three watched the door. Corrin didn’t know what to
say, unsure of what to expect of this blind child who was about to impose upon her
well-ordered life.

Amelia Jackson quietly agonized on the front porch of
the Silver Slipper Saloon, waiting for Mr. Johnston to return. She was in no hurry
to meet this long-lost aunt who owned this place. Her mother had brought her up
in a Christian home with all the morals, poise and mannerisms a young lady
should possess. And no genteel, Southern lady would set foot in a place like
this, much less actually live here.

Her thoughts shifted toward her mother. She was glad
her suffering was over, but her tender, young heart ached to be cradled in her
arms. Her heart yearned for just one gentle touch of her mother’s hand on her
hair or a sweet kiss on her cheek to comfort her in her blindness, for words
can sometimes deceive, but a loving touch rarely does. Her mother was her best
friend, next to the Lord. How would she get through the rest of her life
without her?

Amelia put her hand to her forehead, trying to make
sense of it all, trying to pray for peace, trying to discern why God would
allow this to happen to her. She recognized the short strides of Mr. Johnston
walking toward her.

“It’s time, Miss Amelia,” Mr. Johnson said. “Your aunt
is waiting for you.”

Amelia stood and dabbed her eyes with her handkerchief.
“Let’s go.”

Corrin stood in utter astonishment at the sight of the
young lady who approached arm-in-arm with Mr. Johnston.

“She’s beautiful,” Paul Strupel said under his breath
as he leaned toward Corrin, not taking his eyes off of the stranger.

Corrin agreed. Her twenty-year-old niece’s wavy, light
brown hair gleamed with golden highlights as it cascaded down the full length
of her back. She had twisted her long bangs loosely and pulled them to the back
of her head where they were secured with a bow of fine, pink silk. A couple of
loose strands had escaped and trickled down the sides of her face where her
eyes, fixed straight ahead, shone brightly and were as blue-gray as the sea. Amelia
Jackson’s fair complexion was as satiny as the bow in her hair, and a light
glint of rose colored her cheeks.

The young lady stood average height and grasped a
long, thin stick in her gloved hand, which she used as a sort of guide, keeping
her from bumping into things as Mr. Johnston carefully maneuvered her around
the furniture in the saloon.

How to Read Literature Like a Professor by Thomas C. Foster
Scorpion's Advance by Ken McClure
Donners of the Dead by Karina Halle
Jolly Foul Play: A Murder Most Unladylike Mystery by Robin Stevens
Reckless Heart (Kauffman Amish Bakery 5.5) by Amy Clipston
Murder on the Caronia by Conrad Allen
Snowboard Showdown by Matt Christopher
Saved By The Belles by Albright, Beth
Duck, Duck, Goose by Tad Hills
Curse of the Second Date by Marlow, J.A.