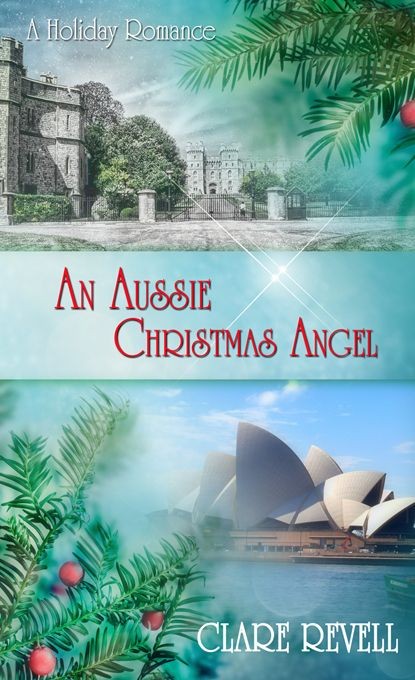 Other titles by Clare Revell

A Note from the Author.

All rights reserved. No part of this book may be used or reproduced in any manner whatsoever without written permission of the author or Pelican Ventures, LLC except in the case of brief quotations embodied in critical articles or reviews.

eBook editions are licensed for your personal enjoyment only. eBooks may not be re-sold, copied or given to other people. If you would like to share an eBook edition, please purchase an additional copy for each person you share it with.

To Andy and Chris

Without you guys there would be no story to have written. I hope I have done justice to it and didn’t take too many poetic liberties with it. And see we were right. Miss Right did live in Australia.

Therese and Mary for the critiquing.

Andy and Chris for allowing me to use their story —and see I can write without killing anyone. :D

Other titles by Clare Revell

I stand in awe of Revell’s ability to pack an entire novel’s worth of action and emotion into so few pages. ~ Delia Latham

What a wild ride... Ms. Revell created a sweet romance within a beautiful setting, but don’t let that fool you. There’s plenty of action in this book as Freddie and Jason work to uncover the truth. Just when you think you’re near “The End,” Ms. Revell pulls out a few more surprises. ~ Dora Hiers

Ms. Revell has crafted a lovely story filled with believable characters that are down-to-earth and a hero that is sure to inch his way into your heart. The suspense is seamlessly interwoven into the plot in this sweet story. ~ Inspire Author

Waiting for his suitcase to arrive on the airline carousel, John Connington wondered for the tenth time since he boarded the flight to Sydney if he were doing the right thing. Here he was, twelve thousand miles from home, alone, and, for the first time since leaving England, he had nowhere to stay.

Every other place he’d stopped in—from Europe and the other side of Australia, to New Zealand and the United States, he’d been able to book either a hotel room or a bed in a hostel in advance. Except Sydney. Yet he wanted to come and figured that as he’d gotten a flight, the Lord wanted him here, too.

Well, strictly speaking, I’m not alone, Lord, as You’re right here with me. Just like you have been ever since I left home.

He’d get a bed at the first backpacker hostel he could find with a vacancy. Hopefully, the information desk would have a list. If none of them had a room, then he’d hire a locker for his luggage and take a fleeting trip to see the harbor bridge and the opera house, before coming back here to queue for a standby flight.

I trust that You have something planned, Lord. You haven’t let me down yet, and I don’t imagine You ever will.

Christmas decorations hung from the baggage claim ceiling and canned carols poured from the airport loudspeakers. Only mid-November but already the Christmas spirit permeated everywhere. Baggage on the carousel bumped along, oddly in time with the music, but his brown case, the one with a bright red strap bearing his name, was nowhere in sight. His oldest sister, Dorrie, had bought him the named strap as a going away present. He’d thought it daft at first, but it did mean his case stood out in the crowd. Where was it now? He clenched his teeth.

Did it even make it from the check-in desk onto the flight?

His heart sank as the last case was collected and the carousel stopped turning.

You know, Lord, if You didn’t want me in Sydney, there was an easier way of telling me. Like cancelling the flight, or me not getting a flight in the first place. But no clothes on top of nowhere to stay, really is taking the mickey.

He headed over to the nearest airport employee. “Excuse me? My case didn’t come through with the others.”

“Are you sure you had the right carousel, mate?”

John nodded. “Yes, I just got off the Perth flight.”

“Then if you’ll come with me, we’ll file a lost baggage claim.”

Forty minutes later in the long, snaking line for customs and immigration, he reevaluated this four week globetrotting adventure. Taking in Hawaii, Australia, and New Zealand sounded great when he planned it. He wasn’t getting any younger and wanted to see the world while he still could. Everyone at work and home thought he was crazy for going halfway across the world alone. Especially with no mobile phone. But he’d looked into the roaming charges and not only would he pay for the calls he made, his parents and friends would pay to receive them, too.

Right now, he conceded his friends were right. He gazed at the decorations hanging from the ceiling as they moved gently in the breeze from the air conditioning units. Was it really almost December? He’d be home in time to open the first door on the advent calendar. Assuming this never-ending queue moved any time in the next few weeks.

At least in Bethlehem two thousand years ago, Mary and Joseph had each other and probably a change of clothes. Not to mention a donkey for transport. Though the queues they had to wait in were probably a lot longer, hotter, and smellier. And he wasn’t nine months pregnant. He knew how tired his sister grew now she was expecting again, and she still had a ways to go yet.

The children behind him started fighting, as he reached the top of the queue. He slid his hand into the front of his rucksack, produced his passport and visa, and waited for the airport security officer to acknowledge his presence. “Hi.”

“I’m on holiday, backpacking for a while.”

“Did you pack your case yourself?”

John grimaced, burying the desire to shoot back a very sarcastic ‘What case?’ Instead he handed over a copy of the form. Typical paperwork, he’d completed in triplicate. There was a pink form for the baggage people, a yellow one for immigration, and a white one for his own records. “Yes I did, but it never made it here. The last time I saw it was baggage check in at Perth. I’ve filled in the paperwork. The contact details are my parents in England.”

“Do you have any items in your hand luggage on this list?”

John scanned the list, smiling as he realized that marmite and chocolate weren’t allowed through customs, as well as the more obvious things. “No, I haven’t.”

“Turn around and lift your feet please.”

“I need to see the soles of your shoes.”

No further explanation was forthcoming, so John did as requested. His passport was stamped, and he followed the signs to the main concourse. The information desk stood to one side of the terminal. He dodged the crowds making his way to it. Another queue greeted him, and he again waited patiently. Finally, he reached the top. “Hello.”

“Do you have a list of backpacker hostels, please?”

“Sure.” The young woman smiled at him and pulled a sheet of paper from under the counter. “Here you go. There are several on here, along with phone numbers. Pay phones are to your right.”

“Thank you.” He took the paper and tucked it into his shirt pocket.

“No worries. Have a good holiday.”

John made his way over to the bank of public phones, slid his prepaid card into the slot and started at the top of the list. The place was full. By the time he got to the seventh hostel on the list, he had a fair idea how Mary and Joseph had felt all those years ago. At this point, even a stable looked pretty good.

Hostel number seven did have a bed, and he immediately took it, scribbling down the directions the receptionist gave him. He’d need to take the train to King’s Cross. That made him smile. How many other English place names would he find here?

The station was easy to locate, and the train came almost immediately. Once aboard, John found a seat and sat with his rucksack on his lap. He leaned back and watched the platform start to roll past the window. Today was Friday. That gave him today and tomorrow to find a church for Sunday. Being on holiday was no reason not to go to church. God didn’t take time off from loving him, after all.

The train pulled out of the airport into the bright sunlight, and John watched as they passed the buildings. He could almost be in any city, except you didn’t get a sky like this at home. At the next stop, several young women clad in shorts and strappy tops, boarded. They sat opposite him, chatting and laughing.

John turned his attention back to the window, grinning as his sister sprung to mind. Not because she dressed like that, but because her light laugh was the same.

“You know why you’re still single at your age, don’t you?” Dorrie had teased him over the Sunday roast.

“Because I’m boring?” John replied in the same tone.

“No, silly. Because Miss Right happens to live in Australia.”

“Seriously. That’s why every girl you ever asked out has said no.”

“So I should go export myself to Australia to find her?” John laughed. “Somehow, I don’t think so.”

He’d blown off the comment and not really thought about it until now, but he couldn’t help wonder if Miss Right really
did
live here. Not that it would make any difference. She still wouldn’t go out with him if he asked. And besides, he was on holiday and would be going home soon. And home was twelve thousand miles away. End of story.

The train pulled into Kings Cross, and the Australian heat slammed him like a sledgehammer as he made his way onto the street. His heart sank as he glanced around. The whole area looked tired, even the decorations hanging from the street lamps drooped. Several women stood on the street corner. From their outfits it didn’t take much to work out what they did for a living.

Taking a deep breath, John headed in the opposite direction towards the hostel. He made a pit stop in a couple of stores along the way to buy a new case, padlock, and some clothes. Not something he could really afford to do, but he didn’t have a choice. He couldn’t live in the clothes he stood up in for the remaining two weeks of his holiday. He opted for the cheapest case possible, three changes of clothes, and a couple packs of boxers. That should be plenty. He added a towel and wash stuff to his basket and then paid.

The hostel wasn’t much to look at and reminded him of the block of flats on the edge of the estate he’d spent his childhood on. It could be great if only a little care and attention were paid to it.

Fulfilled by Allyson Young
The Vatican Exposed: Money, Murder, and the Mafia by Paul L. Williams
Innocent in His Diamonds by Maya Blake
Primal Call by Sizemore, Susan
Kaya Stormchild by Lael Whitehead
Nothing but the Truth by Jarkko Sipila
Bastard Prince by Beverley A. Murphy
No Man's Space 1: Starship Encounter by Nate Duke
A Forever Thing: A Contemporary Christian Romance NOVELLA by Ullrick, Debra
Crash Deluxe by Marianne de Pierres