Read Amid the Recesses: A Short Story Collection of Fear Online

Amid the Recesses: A Short Story Collection of Fear 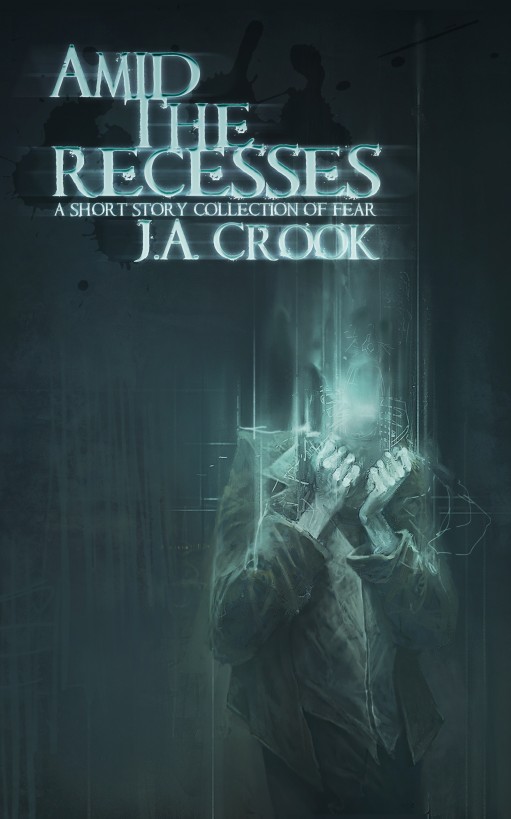 Written and Edited by
J. A.
Crook

This is fiction. Names, characters,
places and incidents are either products of the author’s
imagination or are fictitious. Any likeness is
coincidental.

Do not reproduce this book. Making or
distributing copies of this book is copyright infringement and will
subject the infringer to criminal and civil liability.

The Horse, the Elephant
& the Lion

Of Love and
Death

“Hard people make hard times. I’ve
seen the meanness of humans till I don’t know why god ain’t put out
the sun and gone away.”

I stared over the
assortment of items I placed on the counter in front of the
shopkeep. A coke, a mostly melted candy bar, a pack of cigarettes
and a lighter. It was hot in the small, deteriorating shop. The
windows were glossed with a sheen of residue from long exposure to
the wind and sun. Many of the windows were cracked or boarded up. I
wondered how many customers frequented the little shop. The
desperate ones, I bet.

I should have been wary.
The gas pumps didn’t have a slot for a credit card and the display
was analog, with flipping white numbers and small, square
backgrounds in contrasting black. The pumps were rusted to hell and
took a small eternity to fuel the SUV. For those desperate enough
to step inside of the decaying shop, there would be an opportunity
to meet the unusual old man behind the counter. The old man’s eyes
were white with cataracts, but it was apparent that he wasn’t
blind. His eyes followed me in the same suspicious way I’d seen the
Asian attendants watch black folks in the inner city corner stores.
I was an outsider.

The old man’s head was
bald, but he wore a thick beard on his face. The beard hung down to
the middle of his chest, riddled with grey and dingy black, as wild
as vine. He wore suspenders that rose over a red and white
checkered shirt. The frayed suspenders kept his pants up to the
bottom of his sunken chest, giving the impression he had a tiny
torso. It was hard to gauge his height as he sat in a splintered
rocking chair that crunched the dirt under it with each restless
sway.

I noticed a shotgun hanging
right behind the old man’s head. The gun was conspicuously well
kept in comparison to the rest of the store. It gave me an uneasy
feeling, one I tried to dissipate with small talk.

The old man didn’t reply.
He looked at my pitiful selection of items on the counter top in
front of him, eyelevel with his rocking chair.

“
Service with a smile.” I
mumbled as I reached for my wallet. I hoped my sarcasm masked my
mumbling, because I immediately regretted saying anything. I placed
the money on the counter with exact change and gave a smile.
“Thanks for the help. Can I have a bag?”

The man stared and was
unresponsive. He may not have been full blind, but I couldn’t rule
out deafness. I gathered my items and headed out the door. I
carried food cradled in my arms like a nomadic cavewoman.

Outside, a group of
pimply-faced teens stood around my vehicle. They looked into the
windows and rode around the new wax-job with their cheap,
hand-me-down bikes. It seemed the kids had never seen anything like
it. Nothing in the town looked like it was made after 1950. I
stopped a short distance from them, peeled open my melted candy bar
wrapper and began to eat while I waited for them to notice me. The
kids’ fascination kept me waiting for some time.
If I was a snake.

One of the kids
noticed.

“
Oh,
shit. Hey Mister. Nice car.” Obscenities from a teen boy. It
was
cliché
.
I was surprised he got out the “oh” before the “shit.” When I was
their age, I spoke in curse.

After I lapped up the
chocolate on the metallic innards of the candy wrapper, I said,
“It’s an SUV. Sport utility vehicle.” I chewed
pointlessly.

The kids stared at me in a
way reminiscent of the old man from the shop. Their eyes seemed
fearful and aggressive, and I could tell their hormone-riddled
minds tried to size up an enemy they couldn’t understand. They
seemed perplexed by my correction. I waited for a response and
scavenged for leftover chocolate on the film wrapper.

“
What you got in the box
there?” The pudgy one asked. He was a blobby, repulsive kid
swallowing the bike under him.

I felt inclined to answer.
“I’m a salesman.” I doubted that excuse would send them scrambling
off before they asked more questions.

“
Yeah?” The second kid to
speak up was red-haired and freckle-faced. He seemed less timid
than the fat one. “What do you sell?”

I shrugged. “Are you
buying?”

“
I didn’t think so. How
about you kids get going, huh? I’m leaving.” I walked toward the
driver’s side and popped finger after finger into my mouth to clean
them. I tossed the wrapper on the ground. It didn’t make a
difference in the neglected little town. The main road was littered
with soda cans and beer bottles. Dust blew the trash into dried,
stringy plants, barbed throughout. Hundreds of plastic bags waved
like tiny white flags that surrendered to the wind or to
Humansville’s condition. The steady wind blew a fragrance of cow
shit and sulfur.

The kids rode off and
looked back. They chattered between one another. I heard one say,
“I bet it’s a dead body!” and I laughed.
It would have stunk,
I
thought.

I got into the car and
tried to start the engine. I heard a reeling, a squeal and a pop.
The SUV’s gauges rose then fell, like a dying person taking a last
breath. Smoke rose from my hood. I watched the stream of grey smoke
wisp with the wind, dragged along its current.

“
Fuck me.” I reached
beneath the dash and popped the hood. I left the SUV and stepped to
the front of the car. I lifted the hood and looked inside. The
hair on my neck rose as I observed the robotic maze of wiring and
tubing, all of which meant nothing to me. An uncomfortable feeling
drew me to turn around. I looked through the cracked windows of the
shop and saw the old, white-eyed man watching me from inside with a
rotten smile on his face.

“
Yeah, real funny,
asshole.” I turned back to the SUV and investigated the source of
the smoke. The grey washed over the entire surface of the SUV’s
innards like a graveyard mist. I didn’t know a thing about fixing
SUV’s. I peered toward the old man and shook my head. Round
two.

I went back into the shop
where the old man rocked and smiled at my misfortune. I remained
polite. “May I please borrow your phone? No service out here.” I
could have said a thousand other things.

The old man stared. Awkward
eyeballing matches seemed common to this place. I imagined it took
a minute for my language to filter through the brains of the inbred
morons that called Humansville home.

The old man’s smile faded
with the question. A gruff, guttural sound coughed from his
mouth. His eyes turned back outside as rocks and asphalt shot
out from spinning tires. I followed the old man’s gaze and noticed
a police cruiser.
Lucky
me
, I thought. I left the store without
another word for the old man. An officer stepped out of the cruiser
as I moved through the threshold of the shop’s door, a door that
hung by the top hinge and threatened collapse. The police officer
was tall, at least six and a half feet so, and his large,
wide-brimmed hat and mirrored aviator shades made him more
imposing. He wore a pressed, tan and brown uniform. The sun high at
this hour reflected from his sheriff’s badge perfectly.

“
Afternoon, sheriff. Hey,
listen, I’m having some tro—“ The officer lifted a finger to cut me
off—a proverbial shut-the-fuck-up—to which I obliged.

The officer continued to
the front of the SUV, long legs moving him forward in unnatural
strides, like a circus performer on stilts. A blue pinstripe ran
down the side of his pant legs in a clear contrast to the rest of
his earthy uniform. He bent down over the engine and took a quick
whiff. The officer pendulum-bobbed back and forth for a minute
while he inspected the guts of the vehicle, then rose. His thin,
cracked lips parted with all the trouble of someone who hadn’t
spoken in ages.

“
You got a radiator leak.
You blew a gasket, I bet. That’ll cost you a bit to fix, mister.” A
dark brow rose and he tilted his head my way. He peered at me from
over the crest of those mirrored glasses. I saw my pitiful stance
in the reflection. I saw my inadequacy.

My jaw dropped from being
cut off and kept slack with the bad news. The SUV was in trouble
and I was stuck in this Podunk town. I knew the repair costs would
be horrendous because I was stuck without the repair, there likely
wasn’t another repair shop within a hundred miles, and I didn’t
know a thing about repairing vehicles. I took in an agonized
breath. I watched myself fold in dismay through the mirror of the
officer’s glasses.

“
I can give you a ride over
to Miss Judith’s place. Her husband, Mortimer, knows a thing or two
about fixin’ cars. Maybe he can do something.” His dried lips went
thinner and his broad arms crossed. He waited for my decision, but
showed no sign of impatience. He had all the time in the world. I
didn’t have a choice.

“
I suppose there isn’t a
Meineke or a Ford dealership around here?” I barely got the
question out before the sheriff started to laugh, a loud, booming
laugh, primed by the mile-long abyss inside of him.

“
How
about you get in the cruiser? I’ll take you out to Judith’s.” The
officer went back toward the driver’s side of the cruiser. He
didn’t wait for an answer because he knew what my answer
was.
“Ford dealership. Oh, that’s a
good one,” the sheriff said and he laughed on as he rounded the
cruiser.

I looked toward the
backseat of the broken SUV. I couldn’t leave without my trunk. I
ran over, opened the back door and dove in. I tried to get my arms
around the broad container. My fingers tucked beneath the leather
bands that kept the trunk together and searched for
leverage.

“
Sheriff—“ I shouted from
near the SUV, “I need to take this trunk with me. It has valuables
in it. I’d rather not leave it here. Heat sensitive, you know?” I
offered the sheriff a crooked smile. I pulled out the bulky storage
trunk and was nearly thrown to the ground. My trouble was made
worse by the sheriff’s next question.

The Devil of Jedburgh by Claire Robyns
Folly by Laurie R. King
Baumgartner Generations: Henry by Selena Kitt
A Soldier' Womans by Ava Delany
This Will Be Difficult to Explain and Other Stories by Johanna Skibsrud
Mind of Her Own by Diana Lesire Brandmeyer
Salt by Danielle Ellison
The Pretender by Kathleen Creighton
IK3 by t
The Secret Agent's Surprises (Harlequin American Romance) by Leonard, Tina