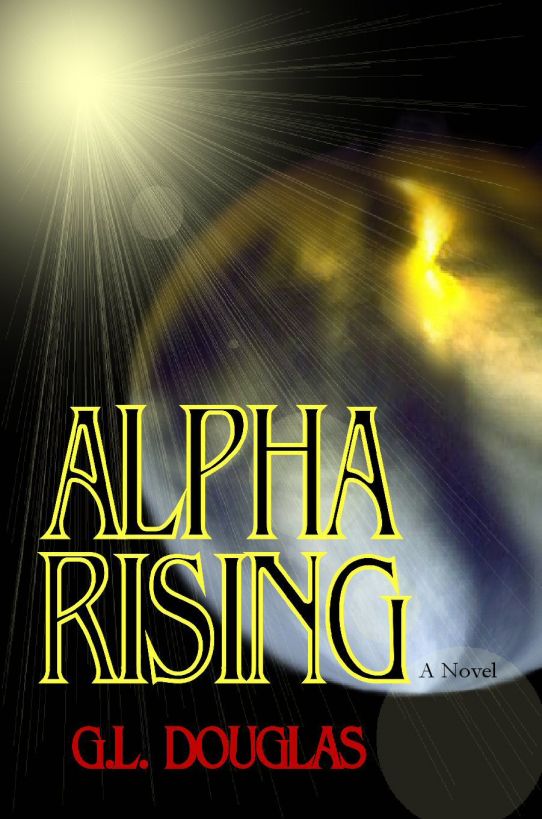 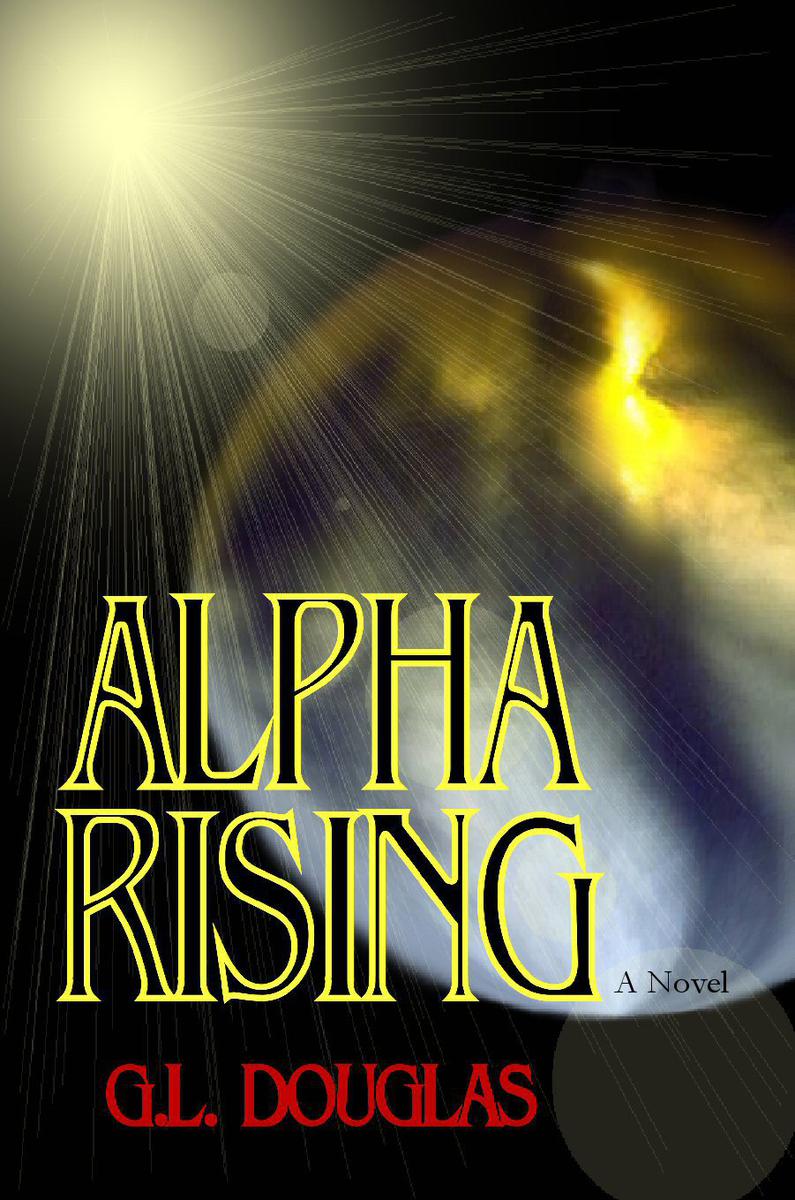 All rights reserved. No part of this book
maybe used or reproduced by any means, graphic, electronic, or
mechanical, including photocopying, recording, taping or by any
information storage retrieval system without the written permission
of the author except in the case of brief quotations embodied in
critical articles and reviews.

This is a work of fiction. All of the
characters, names, incidents, organizations, and dialogue in this
novel are either the products of the author’s imagination or are
used fictitiously.

Alpha Rising can be ordered in print/hardcopy
from both Amazon.com online, or through major bookstores online or
in-store.

This ebook is licensed for your personal
enjoyment only. This ebook may not be re-sold or given away to
other people. If you would like to share this book with another
person, please purchase an additional copy for each person. If
you're reading this book and did not purchase it, or it was not
purchased for your use only, then please return to Smashwords.com
and purchase your own copy. Thank you for respecting the hard work
of this author.

"Why should we bother ourselves with the
merits of fantasy worlds? Because sometimes it can be a good
exercise to pull out the stops and let our minds enjoy unrestricted
possibilities. From time to time, answers to great questions have
accidentally emerged from the muddy waters of unbridled
imagination. A light-hearted and playful romp through the world of
science fiction might uncover interesting viewpoints to difficult
questions.”

From Dr. Odenwald’s
article
Faster Than Light
(used with permission)

May 25, 2020. Kennedy Space Center. The
countdown clock’s bright yellow numerals flashed to T minus 4 hours
and counting. At 5:00 a.m., two astronauts aboard an experimental
craft would lift off on the most critical and dangerous space
mission ever undertaken.

In NASA’s pre-flight isolation quarters,
Commander Bachman “Bach” Turner nodded in and out of sleep, his
body exhausted and mind dilated from two intense weeks of rescue
run-throughs, medical procedures, and linkup drills.

After looking at the clock for the tenth
time in an hour, the restless astronaut pushed strands of unruly
brown hair from his forehead and rolled out of bed talking to
himself, or as NASA calls it, “think-aloud protocol,” considered
helpful in solving problems. “Eat something. That’ll help me sleep.
Shouldn’t eat just hours before a launch, but I’ve done it before
and never puked at liftoff.” Bach headed to the kitchen, grabbed
the TV remote, and channel surfed as he walked—medical shows,
religious music, reruns, scantily clad women, all-night news. “News
… and comfort food,” he said, tearing into a bag of chocolate chip
cookies and pouring a glass of milk.

Bach settled into a recliner in the living
room, set his milk in the chair’s cup holder, and pressed the heat
and massage buttons. The vibrator kicked on and a dozen concentric
circles jigged on the milk’s surface. He stuck his finger in the
center to disrupt the pattern and watched in fatigued amusement as
the quivering liquid reorganized and encircled it. He smiled,
remembering a waterwave experiment of larger proportion in the
bathtub when he was five years old. The resultant discipline by his
mother instantly squelched his interest in deep sea diving. Better
was intergalactic travel wearing bath towel capes and flying
cardboard-box spaceships that, in his imagination, transported him
to distant realms.

Bach thought about two risky spacewalk
missions he made four years ago to repair the ailing International
Space Station. Although unsuccessful in returning the station to
service, his efforts were recognized as technological milestones.
But he knew what lay ahead this time was far more perilous.

The TV flickered through a round of
commercials and a rerun began of an earlier broadcast. A newscaster
narrated. “With time running out, and amid heated controversy, NASA
officials confirmed the President’s go-ahead for a dangerous rescue
mission to find and bring home the crew of four aboard the
AstroLab, lost beyond Earth’s solar system since May 7, 2020.”

Bach shook his head and aimed the remote,
but then wondered if they would show his and his crewmate Faith
Christopher’s brief statements. “Not sure I want to see myself in a
TV interview.” He stuffed a cookie into his mouth and watched
anyway.

The journalist’s voiceover accompanied
footage of the AstroLab’s launch. “The next-generation spacecraft
nicknamed ‘the Lab,’ lifted off on May 1, 2020, on an expedition
slated to transcend the bounds of existing space exploration and
rewrite man’s concepts of the universe.” As he continued, portraits
and group shots of the two female and two male astronauts flashed
on the TV screen. “Commander Luke Lynch, forty-eight; Pilot
Moondeni ‘Deni’ Kambo, thirty-nine; Mission Specialist Kaz Lopez,
twenty-six, and Payload Specialist/Medical Doctor G.R. Demetri,
forty-two, were set to explore a mysterious green sphere that
appeared in the Southern Cross constellation two years ago. When
research confirmed the orb was a biospheric planet encircled by two
crisscrossing bands of water and orbiting its own small sun, space
exploration programs geared up and aerospace personnel around the
world united with one goal: travel beyond our solar system to
explore the planet they named Urusa. The name, a variation of the
earliest spellings of Jerusalem, translates to ‘Place of
Peace.’

“
Following their classic
liftoff from Earth, the crew jockeyed the AstroLab to a lunar-based
particle beam accelerator where they made history after the nuclear
device thrust their manned spacecraft beyond Neptune and Pluto at
warp speed. The Lab performed flawlessly on course to Urusa, but a
day before their scheduled touchdown, the crew’s communications
ceased and the ship vanished from the monitoring
equipment.

“
When efforts to
reestablish contact failed, NASA plunged into critical operations
for an emergency search and rescue mission. But a day later,
sobering facts emerged. If the AstroLab’s crew were without power,
their emergency systems would sustain life for five weeks, maximum,
and NASA had no other spacecraft capable of travel beyond the solar
system.”

“
Now, against all odds,”
the newscaster said, “a risky rescue mission has been pieced
together at the last minute.” The camera panned to a table in
NASA’s pressroom showing Bach and his crewmate Faith seated with a
news anchor.

Seeing himself on TV, Bach squirmed, cleared
his throat a little, and swigged his milk. “Next time, old boy,
loosen up a bit. And get a haircut first.” Then he smirked. “But I
look younger than thirty-five.”

The news anchor began his interview. “Here
with me today are the two courageous astronauts selected for the
search mission, Commander Bachman ‘Bach’ Turner, and
Copilot/Mission Specialist Faith Christopher.” The camera moved in
for a close-up of Bach as the news anchor continued. “Commander, an
incredibly difficult effort lies ahead for you and your copilot.
Less than three weeks ago there seemed little hope. Now, hope comes
with an enormous risk and a time limit of sixteen days to find the
AstroLab, and then bring our astronauts home. How did this
not-found-in-any-textbook rescue mission evolve so quickly under
such tense circumstances?”

A puff of air slipped from Bach’s lips.
“Guts and determination. NASA’s scientists and aerospace personnel
didn’t give up. With no other spacecraft suited for warp flight,
they simulated every possibility and eventually agreed to use an
experimental spacecraft with cutting-edge electronics and detection
devices called the Wizard. The best technicians in the world worked
around the clock to retrofit Wizard’s systems to withstand particle
beam propulsion.” He looked at his crewmate. “We’re going to make
it work.”

The camera focused on Faith, a small,
fresh-faced blond who looked more like a teen model than a
thirty-six-year-old astronaut.

The newscaster continued. “Faith, how were
you and Bach selected for this vital undertaking?”

A deep breath prefaced her reply. “My
background in astronomy, cosmology, and oceanography was a good
fit, and I’m trained for medical emergencies.” She glanced at Bach.
“Bach’s an electrical engineer, gifted in computer mechanics and
troubleshooting urgent spacecraft issues.” Faith then explained the
rescue criteria and link-up drills, adding, “Preparation of this
magnitude normally requires months of training, but Bach and I
completed it in two weeks.” She smiled faintly. “We’re confident
we’ll succeed.” Dark circles under her eyes evidenced the rigorous
schedule.

As the rerun telecast neared its end, Bach
rose from the recliner and closed his ears to Faith’s final
remark—even though he knew it had softened many hardhearted
naysayers who’d opposed risking more lives in an uncharted area of
deep space.

Faith commented to the interviewer, “Bach
has a personal interest in the mission.” She paused, then added,
“His fiancée is aboard the AstroLab.”

The newscaster showed no emotion as he
leaned across the table and shook hands with the astronauts.
“Godspeed, and bring ’em all home safe and sound.”

Credits rolled on the TV screen, and the old
space tune “Starrider” played in the background while NASA’s
wake-up alarm chimed in the isolation quarters.

Bach rifled through his closet, pulled on a
tee shirt and surfer shorts and headed to the pre-flight center.
After showering, he entered the pressurized sanitary module where
waiting personnel helped him into his spacesuit. Faith had already
suited up.

With the countdown clock at T minus 1 hour 30
minutes to liftoff, Bach and Faith rode an elevated walkway to the
Wizard’s hatch. Faith entered the ship first and immediately began
the pre-flight check.

Bach stepped aboard with determination
blazing in his eyes. He’d long forgotten NASA’s primary concerns:
Would particle beam acceleration work on the hastily modified
Wizard? Would he and Faith survive with their experimental
reflective ionic shield and wraparound g-force diffusing seats, or
would the beam compress them and then vaporize the ship? He
strapped himself into the pilot’s seat and fixed his gaze on the
predawn sky. “Bring it on!”

A Sliver of Redemption by David Dalglish
Rescued by the Bear (Bear Creek Clan 1) by Harmony Raines
The Awakened: Book One by Tesar, Jason
Sweet Somethings (Samantha Sweet Mysteries) by Connie Shelton
Maggie Malone Gets the Royal Treatment by Jenna McCarthy
The Outsider by Howard Fast
Home Before Sundown by Barbara Hannay
Bloodlands by Cody, Christine
Secret of the Legion by Marshall S. Thomas
Arouse Suspicion by Maureen McKade