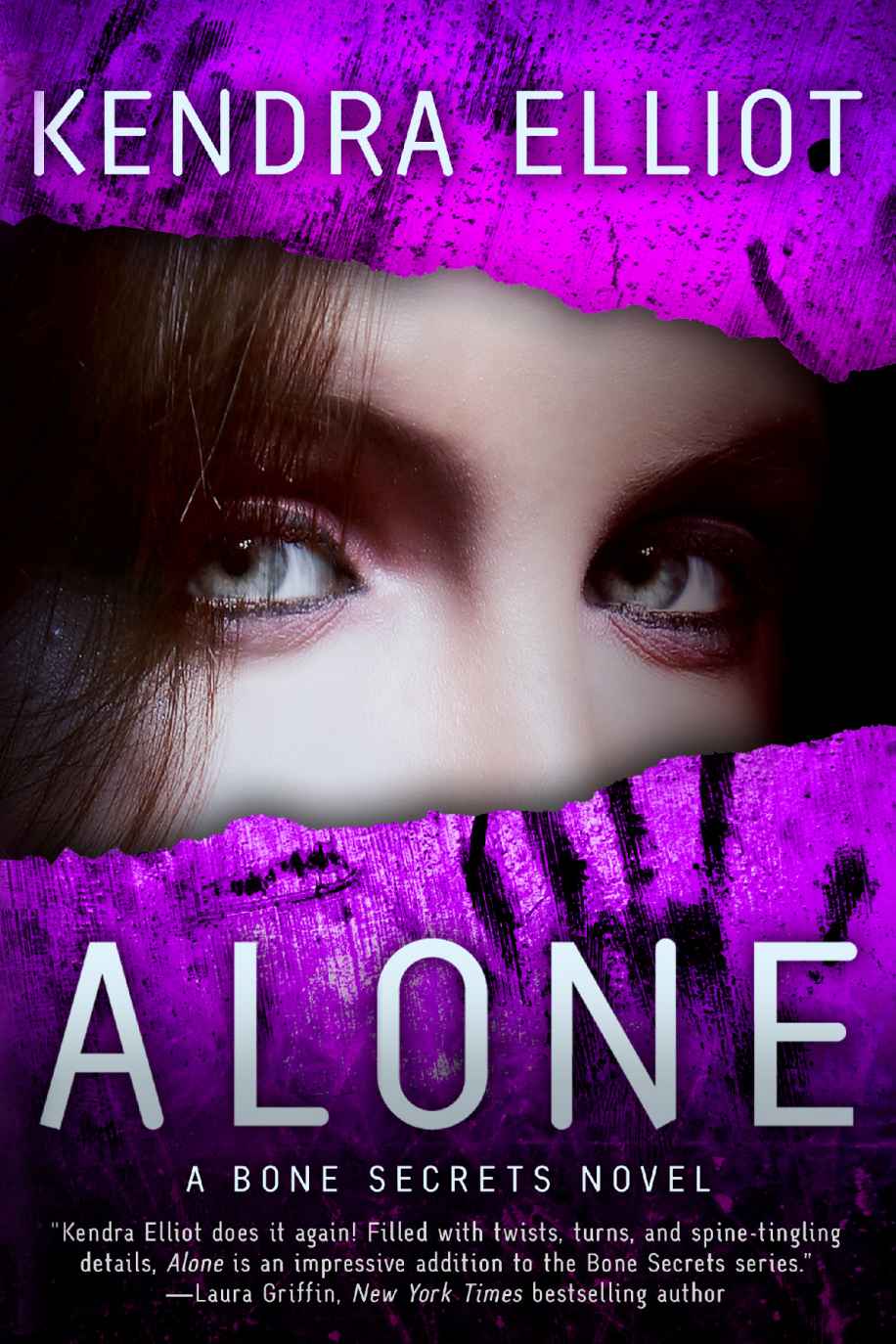 For Lindsay Guzzardo and Jennifer Schober. Thank you for giving me a chance.

“I won’t miss this part of the job,” Victoria heard Dr. James Campbell mutter as he held a blackberry vine out of the way for Lacey and Victoria to pass by.

A discovery of dead bodies had abruptly shortened their Italian dinner at Portland’s fabulous Pazzo Ristorante. The trio of coworkers had been relaxing over a lovely Barbaresco when the medical examiner’s phone buzzed. He’d taken the call at the table and raised a brow at the women, who’d nodded. Both forensic specialists wanted to accompany him to the crime scene.

Five teenagers were dead in the depths of Forest Park.

Time to go to work.

The guiding police officer who’d met them at the trailhead commented, “A hiker found the scene about four hours ago. Looks pretty fresh. One of the girls was still breathing and they rushed her to the hospital. She’s not expected to make it.” He paused to take a breath, and the volume of his voice dropped to where Victoria leaned forward to hear him. “I gotta say, this is one of the most disturbing sights I’ve ever seen.” The tough cop looked rattled.

Who would kill so many teenage girls?
Victoria Peres shook her head. It was a messed-up world. And working at the medical examiner’s office as a forensic anthropologist showed her some of the darkest corners of that world. The indignities and atrocities that people inflicted on other human beings were mind-numbing. The kids were the hardest for her to stomach.

The three of them pointed their flashlights at the dirt path, choosing their footsteps carefully, following the police officer. Luckily the fall rains had paused for the moment, because tonight the forest was intimidating enough. Firs towered overhead, blocking all light from the full moon. Ferns sprouted from tree trunks, drawing nutrition from the bark and thick moss that draped the branches. Victoria had already given thanks that she’d worn her boots to dinner in honor of the fall chill. Still dressed for dinner, the three of them looked out of place for the two-mile hike in the damp woods. It was rare that she accompanied Dr. Campbell to a scene. Her job usually kept her inside the medical examiner’s building.

But this was Dr. Campbell’s last month on the job. Oregon’s ME was ready to retire. And Victoria wanted to spend every working moment she could with him, soaking up his experience, wisdom, and wit. “I can’t do anything about the death,” Dr. Campbell once told her. “But I can do something about what
happens after the death. I can speak for the victims, explain their injuries, and bring justice.” It described exactly how Victoria felt about her job. There was a mutual respect between her and Dr. Campbell that made her cross her fingers, hoping she could achieve the same with the new medical examiner.

Dr. Campbell’s daughter, Lacey, had told Victoria she’d miss working with her father. Lacey served as the ME’s forensic odontologist. She and her father were very close.

Lacey was quiet behind Victoria as they trudged along the dark path. She didn’t wonder out loud at the cause of the kids’ deaths or bitch about the hike; she was professional. Victoria had worked with the petite forensic specialist for a few years, her respect growing every time one of their cases crossed paths. Only recently had they started using each other’s first names.

A soft buzz of conversation touched Victoria’s ears and the trail seemed to light up farther ahead. They were nearly there. She swallowed hard as the gnocchi she had eaten twisted in her stomach. Maybe she should have gone home after dinner and let the medical examiner do his job. But she’d be greeted by a lonely house. The evening had been so wonderful between the food and conversation, she’d hated for it to end. She’d decided to tramp a few miles through Portland’s five-thousand-acre park to view dead teenagers.

Was something wrong with her?

The trail grew choppy with boot prints and small tire marks from the equipment hauled in to process the scene. They emerged into a clearing lit up with glaring lights, and the quiet hum of conversation stopped. The three of them halted and stared, scanning the surreal setting. Cops stood idle in small groups, observing, while crime-scene techs crawled through the display.

It looked straight out of a cheap horror film.

Off the path about ten yards, five young women lay motionless in a lush bed of ferns, arranged like a wagon wheel, their heads at the center, feet pointed out. The image was simultaneously beautiful and evil. One prong of the wheel was missing—the girl who’d been rushed to the hospital.

A cop thrust a log into Dr. Campbell’s hands to sign. He barely glanced at it, his gaze locked on the eerie spectacle.

Victoria Peres felt as if her hands were tied. These poor children still had the flesh covering their bones, unlike her usual subjects at work, but she still had a need to examine them to discover their story.

Five girls gracefully sprawled in the center of a clearing. Their skin harshly exposed by the lighting the crime scene team had brought in. Each girl had long dark hair and they all wore white dresses of different styles. Their hands were all crossed on their stomachs. There was neither blood nor immediate indicator of cause of death, just an unnatural grayness to their skin and lips.

No kiss would wake them.

Victoria pushed her own long hair behind one ear, disturbed by the similarity between the girls’ appearances.
Why did they look and dress the same?

She didn’t usually attend a fresh death scene. But she helped wherever her skills were needed. She’d definitely put in her share of hours over the flesh of the freshly deceased and the not-so-freshly deceased. Digging in the burial pits of the mass executions in Kosovo had desensitized her to most situations.

But when James had received the call, her instincts had kicked in. Death was her field. And she possessed a particular set of skills that could get answers for the questions the dead teens presented. She noticed the cops glanced their way, scoping out who’d arrived at the scene. None made eye contact with her. She’d busted enough balls at crime scenes to know they weren’t her biggest fans. She didn’t care. What mattered was that scenes were handled correctly. Mistakes weren’t acceptable.

She looked away from the sorrow on Lacey’s face. The odontologist had a big soft spot that she wasn’t afraid to reveal. Victoria kept her own sensitivity hidden deep. It wasn’t that she didn’t feel the sadness of the situation; she simply didn’t feel it was professional to show it. And she worked better when she tucked away the feelings.

“Who are they?” James muttered to the cop as he handed the log to Lacey to sign.

“We don’t know yet, Dr. Campbell,” he answered. “There’s no ID with any of the girls. No cell phones, no purses.”

“Parents will be looking for their daughters soon,” said Lacey. “They can’t be over eighteen.”

Victoria eyed the stature and build of the bodies, silently agreeing with Lacey’s assessment. Parents would expect these kids to be in bed by midnight. She followed Dr. Campbell as he carefully stepped to the closest body and squatted next to a female tech, pulling gloves out of his small kit. Up close, Victoria could see the first girl had applied makeup to cover acne on her chin and wore black liquid eyeliner to give the popular cat-eye look.

Dr. Campbell bent the girl’s arm. “Rigor has started. Not fully set yet. Can you roll her onto her side for me, Sarah?” he
asked the middle-aged woman, who nodded and gently shifted the dead girl onto her side. He pressed at the purpling skin on her shoulder blades where gravity had guided the blood to settle once her heart had stopped pumping. It didn’t blanch. “Livor is set. Have you noticed anything unusual?” Dr. Campbell asked the tech.

The tech grimaced. “Outside of this being a group of dead children? Not yet. It’s a very clean site so far. The girls were cold when I got here, and they all look clean front and back. Frankly, it’s like a sick fairy tale.” Sarah frowned. “They’re laid out so perfectly. I mean, even their hair is smoothed down. Someone must have arranged them.”

“It’s just wrong,” Dr. Campbell said as he drew a syringe out of his equipment. Victoria didn’t need to see the medical examiner extract the vitreous humor from the girl’s eye to determine an accurate time of death. Very few things about the human body bothered her, but a needle in the eye was close to the top of the list. Victoria stood and walked back to where Lacey’d waited at the edge of the scene. Two men had joined Lacey. Victoria recognized them as Oregon State Police detectives from the Major Crimes division. The local police department must have called in the State Police for their help.

Harvey (A MacLaughlin Family Novella Book 3) by Krystal Shannan
The Underground City by H. P. Mallory
The Case Against Owen Williams by Allan Donaldson
Self Condemned by Lewis, Wyndham
French Children Don't Throw Food by Druckerman, Pamela
The Truth of the Matter by Robb Forman Dew
Forced Out by Stephen Frey
Dark Waters by Alex Prentiss
Learning to Trust: Paradigm Shift by B. B. Roman
His Little Tart by van Yssel, Sindra