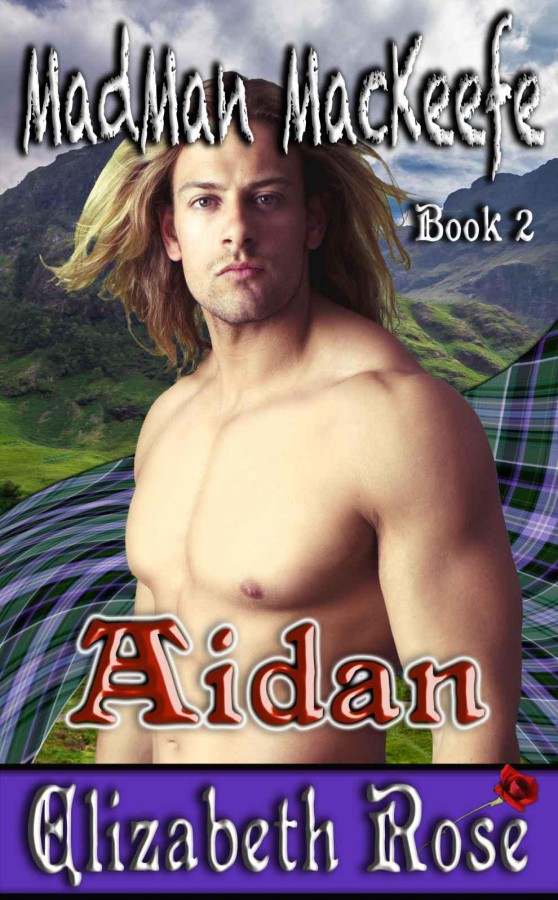 Aidan MacKeefe guards the true Stone of Destiny, using it as his pillow, keeping Scotland's secret safe that the English have stolen a fake coronation stone.
And when he dreams of a Scottish angel and she appears in his life, he is determined to protect her, and believes she is his destiny.

Effie MacDuff needs to help the English find and steal the true Stone of Destiny in order to set her sister free from hanging in a cage. And when a Highlander saves her from being accosted, she realizes her luck, as he is guardian of the stone.
But when he starts calling her his dream angel, what starts out as a mission to save her sister, turns into a romance with a MadMan MacKeefe.

One is willing to die to protect Scotland's secret, while the other is willing to betray her country to save someone she loves.
But when they both let down their guard, the tables take a turn and beliefs are shattered as desires grow stronger, and someone's destiny is bound to change in Aidan.

This is a work of fiction. All characters, names, places and incidents are either a product of the author’s imagination or used fictitiously. Any similarities to actual organizations or persons living or deceased is entirely coincidental. All rights reserved. No part of this book may be used or reproduced or transmitted in any form whatsoever without the author’s written permission.

♔
Lord of the Blade

♔
Lady of the Mist

♔
(Legacy of the Blade Series)

♛
(Daughters of the Dagger Series)

☀
The Dragon and the Dreamwalker

☀
The Duke and the Dryad

☀
The Sword and the Sylph

☀
The Sheik and the Siren

✭
The Oracle of Delphi

The Caretaker of Showman’s Hill
(vampire)

Curse of the Condor
(jungle adventure)

Only a madman would use a stone for his pillow. The Stone of Destiny to be precise.

Aidan MacKeefe tossed
restlessly in his sleep, having used the Stone of Destiny as his pillow for the last six months now, hoping to have prophetic dreams. Supposedly, the stone was used back in the days of the Bible, and Jacob had used this exact stone and had dreams of angels.

Aidan
was in the middle of a dream. Mist surrounded him in his little stone cottage in the MacKeefe camp. He couldn’t see anything in the darkened room, but then the door opened, and in the bright light – he saw an angel. She walked toward him, covered with a long, white, hooded cloak, her fiery red tresses falling in ringlets down to her shoulders. She stopped in front of him, and peeked out from under the hood. While he couldn’t see her face well in the dark, he could still see her wide, green eyes that reminded him of the color of the moors on a warm summer’s day. She steadied her gaze upon him. Then she lit a candle in her hand, illuminating her face beneath the hood.

He
r skin was fair, like alabaster, and a smattering of fine freckles trailed down her nose and spread to her rosy cheeks. She was a bonnie lass, and though he couldn’t see her body under the robe, he knew it matched her beauty. He wanted her badly. Then she smiled at him, and her laugh rang out across the room like the sweet song of a small meadow pipit, bringing with it a fragile innocence to its tone. She was a fine angel. A perfect Scottish angel. He wanted naught more than to reach out his hands and touch her, but something weighted him down and he could not move.

Then, she reached out to him
, and on her inner arm he saw a strawberry birthmark that looked like . . . a skull. He felt himself jerk away from her touch, and then she turned away from him and nodded toward the door. Aidan’s attention focused across the small room, and to his horror he saw English soldiers following her into the cottage with their weapons drawn.

He tried to cry out for help, but couldn’t speak. He tri
ed to reach for his sword at his side, but couldn’t move. Then his eyes scanned down her body, and to his horror, he saw sticking out from the back of her robe right by her doup – a tail. A furry red tail! It reached out and brushed across his face, and in his only form of defense he leaned forward . . . and bit it.

The
sickening screech of an animal cried out, pulling him from his slumber. His eyes popped open, bringing him out of the dream and he sat up quickly, not knowing what was happening.

Then he
saw Reid, his pet red squirrel scurrying off his chest, scolding him, running in circles around the room. The door opened just then, but instead of his dream angel, his friend, Ian stood there with a dour expression upon his face.

“What in the clootie’s name was thet screech?” asked Ian. His tall, muscular form filled the entire doorway, and his dark hair looked wet as if he’d just come from bathing in the loch.

Aidan jumped up, realizing he was fully clothed, and that it was well into the morning hours. Then he remembered taking a nap, too full to move after eating his fill of skirlie, an oatmeal and onion dish topped off with a goose egg. The food for the clan had been prepared by his younger sister, Kyla, and the chieftain’s wife, Wren.

The
door pushed open from behind Ian, and there stood their good friend Onyx, who had recently married an Englishwoman, Lady Lovelle of Worcestershire, after finding out that his true family was English, not Scottish at all.

“Aidan, ye dunderheid,” said Onyx, spying the squirrel running around the room in a heated frenzy.
Onyx’s two different colored eyes stared back at him in question. “What the hell did ye do te yer damned squirrel?”

“I think I bit its tail,” he said, running a hand
through his hair and leaning back against the stone. The Stone of Scone, or Stone of Destiny as most called it, was a large, black basalt rock with ancient hieroglyphs etched into it. It had iron-looped handles embedded into the sides to use for carrying with a pole through it. It was a very heavy stone, and took at least two full-grown men to move it, if they were strong. He’d embedded the thick stone into the dirt of the cottage floor to lower it, and pulled his pallet over it, to it to use as his personal pillow.

“Were ye hungry s
o soon after eatin’ so much skirlie?” asked Ian, walking into the room and sitting down. Onyx followed, leaving the door wide open. The summer sun spilled into the cottage, lighting it up and bringing with it a fresh breeze from the Highland hills.

“Nay, I had a dream.” Aidan settled himself
atop the stone and donned his leather shoes that laced around his legs. Highlanders often went barefooted in the summer, unless they were traveling, like they would be today. “She was a bonnie angel with reid hair, I tell ye.”

“And so ye bit her?” asked Onyx
, pulling up a chair and making himself comfortable. He raised an eyebrow in amusement, his one orange eye shining in the sun from the door, while his other black eye, stayed in shadow. Most people thought Onyx was a madman because of his eyes. Well, all three of the friends were madmen, and Aidan prided himself of the fact. If there were an outlandish or dangerous act or activity suggested, they were the first to try it just for excitement.

“Nay. Me Scottish angel
had a tail – and we all ken thet our enemies have tails,” he said, pointing out the superstition held throughout the lands. “And I couldna move, so I bit it.”

Ian and Onyx both laughed hysterically, holding the
ir sides and almost falling from their chairs.

“Sorry, Reid,” Aidan said, looking over to the other side of the room where his pet was sitting on the floor licking its wounds. “So Dagger,” he continued, calling Onyx by the name only his close friends used, “when did ye get te the Highlands? I thought ye were visitin’ yer new family in England fer awhile.”

“I jest arrived,” Onyx told him. “An
d actually, Love is stayin’ with her mathair fer awhile in Worcestershire,” he said, speaking about his wife. “E’er since she started gettin’ heavy with our bairn-te-be, she seems te want te be close to her mathair. And since I’m no’ her new faithers’s favorite as he still hates Scots, we decided I’d be best off visitin’ the MacKeefes until she’s closer te birthin’ the bairn.”

“I c
anna picture ye being a faither,” said Aidan.

“I already am a faither
te her son, Charles, remember.”

“So is Charles with her then?” asked Ian, inspecting a wooden cup on the table and smelling it, then deciding to sample its contents.
He made a face and set the cup back down quickly.

“Nay.
” Onyx leaned back on two legs of the chair, with his arms crossed and also stretching out his feet atop the small table. “The lad wanted te go back te Blackpool and be fostered by me own faither as they are gettin’ along nicely, and I do believe the lad enjoys being a page. Someday he’ll make a fine squire.”

“And how are
ye
gettin’ along with yer faither?” asked Aidan, knowing Onyx still had some ill feelings for the man who almost killed him as a baby.

“We are
gettin’ along better e’ery day,” he relayed. “And I even invited him te join us at the Highland Games in the fall.”

The
Highland Games was a tradition of many different competitions, and everyone looked forward to it.

“Guid,” said Aidan, reaching over
and picking up his sword. He laid it across his lap and shined it with the edge of his purple and green tartan. The clan’s old weaver only knew how to weave one pattern, so the plaids of the MacKeefes ended up all looking the same. “Guid, thet is, thet he’ll be able te see me win the caber toss and also beat ye inte the ground with the sword hold.”

“Aidan, keep dreamin’ on thet rock o’ yers,
becooz ye’re daft,” said Onyx. “Ye’ll ne’er beat me at the swordhold, and ye ken it. I can hold swords high and proud to me sides all day and night if I have te, and you’ll ne’er see me arms shakin’ at all.”

“A
ye, thet’s true,” agreed Ian with a nod of his head. “He can. And Aidan, what makes ye think ye can beat our chieftain at the caber toss? E’eryone kens thet Storm has held the title o’ winnin’ the caber toss fer the last nine years now. He is countin’ on makin’ it te ten and havin’ a huge celebration.”

“That’s ri
ght,” said Wren, Storm’s English wife, as she appeared in the open doorway with Kyla, Aidan’s sister at her side. “My husband is King of the Caber, and you all know it’s because I’m his good luck charm.” Wren was a few years over thirty, and she and their laird had four children. Wren’s long, black hair was tied up and covered with a kertch as was custom of married women.