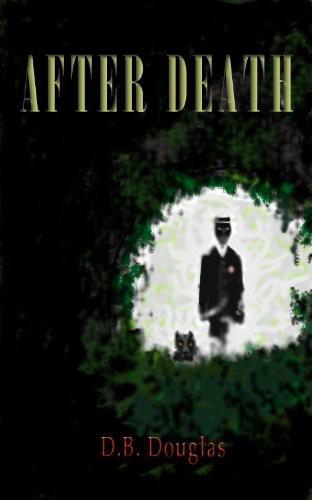 Desperate aspiring horror novelist Franklin Davis will do anything to achieve success to provide for his family, even work in a convalescent home to role-play his latest macabre idea with the elderly denizens.

While there he makes friends with a friendly codger named Eli and floats his premise; What if a person could return after death if they made a binding promise to do so?

Eli chastises Franklin for his foolishness. Of course, Franklin doesn’t believe in this idea either—he’s just gathering material for his book to make it seem as real as possible…

Eli reluctantly agrees and makes the promise… And from that moment forward, Franklin’s life will never be the same…

Serial murders… Events that defy rational explanation… Spectral visitations… Nothing is what it seems to be… And Franklin realizes in despair:

CHAPTER 16 – A Night at the Hospital

CHAPTER 32 – The Other Side

“How does anyone know when someone’s telling the truth, especially about themselves? Most things can’t be corroborated. Practically everyone that’s ever lived next to a serial murderer thought they were nice guys — until the bodies started turning up.”

Franklin Davis had always had an active imagination. Even from his very earliest recollections, he’d always had a tendency to make up fanciful stories and, as it seemed to him, it made perfect sense that he wanted to be a writer right from the beginning.

It was also no surprise that when he envisioned a character, like his latest heroic vampire fighter, Sherwood Turrow, he saw himself in the starring role. In this case, the exercise was critical; he didn’t want Sherwood to too closely resemble that other famous vampire hunter from Dracula fame, Van Helsing, and what better way to accomplish this (as well as to have the character’s actions and reactions seem real) than by running through the story as the main character. Besides — he had always thought of himself as a genuinely good person — it was natural that he be the protector from evil in his stories…

Frank leaned back in his chair before the computer and closed his eyes. It was quiet in the modest and tidy room except for the twitching of Argus’ toenails as they scraped against the wall as he slept, the handsome German Shepherd no doubt dreaming of chasing a cat or some small creature and occasionally half-barking as he drew close to his quarry in his alternate reality.

Frank tried to block out the needles of desperation and the subconscious mantra that kept urging that this book must get published, that he had a mortgage for this fine suburban tract house to pay, a dog and wife to co-support, a future family to build…

He was good at this, he knew he was — So why had success been so elusive?
Four horror manuscripts with nothing to show for it except countless rejection slips stuffed in assorted drawers. He needed to keep them out of sight. He needed to remain positive and focus on the fact that this latest story had possibilities, the market was there, he just needed to finish it.

But there were so many easy distractions, so many games his mind could play to create reasons to do something else.
No, he could do this.
He
would
do this…

His method was well practiced — all he needed to do was relax and project himself… Concentrate on the details, remember the back story he had already created… Literally
get into
character.

With one last great exhale, he was there at last.

He stood in his dapper suit, a silver-handled cane with a beautifully worked horse head in his hand. It took him only a second to get his bearings;
Ah yes, the basement of the castle on the Belgian isle where he had last tracked the horrible monster.

He peered around in the half-light. The walls were made of huge ancient blocks of stone, grey like most everything else in the room. There were wooden crates covered in spider webs and dust, an oddly staring statue, also covered in grey dust, and antiquated furniture, first covered in cloth then covered in more grey dust. The overall effect was dreary and stagnant with decay;
a fitting place for a showdown
, he thought.

He strode towards a covered item that stood upright in the corner and dust surged into the air as he moved. It rose in undulating currents that were so thick he could barely breathe let alone see. When he reached the piece, he uncovered it slowly, trying not to further disturb the air.

The cloth slid away with an echoing rustle and a glimmer shone in his eyes that made him start backwards. It was only an old full height mirror, the light reflected from a tiny gap in the highest basement window as the morning sun began to rise.

He paused and looked at his reflection and was pleased. He was a boyish thirty-two but the goatee and tailored clothes helped a great deal and he felt he appeared more than adequate for this part. He admired the cut of the dark coat, the suppleness of the leather gloves over his fingers. He cocked his head slightly at a thought; a top hat — Should Turrow sport a top hat or would that be going too far? The hat was suddenly there and he turned and checked his reflection from another angle and slid his fingers along the brim with his gloved hand.
Yes, it was perfect. It completed the impression.
He met his own eyes then and scowled.
You — I — must not keep referring to this character in the third person for this to work properly — I am Sherwood Turrow, great vampire hunter. I am Sherwood Turrow, I have been chasing this hellish demon all over Europe and I have now cornered him in his lair. He is here somewhere and I will destroy him for the betterment of all humankind.

A soft chuckle behind him made him turn, though there was nothing reflected in the mirror.

Standing not two feet away was a tall, thin man in immaculate dark clothing that starkly contrasted with his pale, ageless face. Handsome and arrogant, the man continued to smile at Franklin, the white tips of his sharp incisors barely noticeable stretching the corners of his mouth. His black eyes gleamed, and when he spoke it was with a deep and fluid voice, the register and resonance almost hypnotic.

“So you have found me. I congratulate you — though I think you will soon regret your own persistence.”

Franklin withdrew the razor-sharp sword from its cane-sheath in one swift motion.

He balanced it in hand, readying for the swift thrust to come.

The dapper pale man showed no fear, rather, anger at such an insult in his own abode.

Franklin glanced at the high basement windows.
If he could only break one or two, sunlight would pour in and there would be no where for this beast to go.
But after only a seconds pause, another thought answered the first:
It’s been done too many times before — There’s no originality in that.
And then a quicker response of reproach:
Stay in character! Enough of this commentary or you will completely ruin things!

As it was, he had been distracted for too long. A cyclone of dust rose of itself from the floor between them and wrapped around Franklin in an obscuring cloud. The tempest was aggressive — He wiped at his eyes and covered his mouth, the filth almost overpowering. He stepped through it, blade forward.

But the man was no longer there — instead a loud sloppy flapping filled the air.

It sounded like wings, large and powerful. Franklin spun,
Where was it coming from? Which direction?

It was amazingly fast, one moment at his left, another at his right. He continually changed directions to be less easy prey, peered through the murk at his surroundings for something small enough to hurtle at a window.
There, a small vase with wilted flowers!
He snatched it up, whirled, and let it fly.

The projectile was right on target, turning in the air, inches from the high basement glass.

A dark, shapeless form intersected its path and knocked it harmlessly to the ground.

And now a quickly shifting laugh sounded all around him in the thick air and, despite himself, he felt chilled to the bone, the hair on the back of his neck rising in a quiver.

He continued to swivel, cane-sword drawn. A cold sweat ran down his back with the new knowledge that daylight was not going to save him —
He had underestimated his foe and was now in the gravest danger.

Abruptly, a deafening screech tore across the room as the creature attacked from behind. He pivoted — Just in time to see its twisted black features and large toothy mouth swooping down to engulf him.

He ducked, a talon raking his coat apart at the shoulder and spun again to defend himself as it made a lightening fast turn in the air.

I'll Get You For This by James Hadley Chase
Rise of Phoenix by Christina Ricardo
Captive's Kiss by Sharon Kay
Another Marvelous Thing by Laurie Colwin
Annihilation Road by Christine Feehan
The Perfect Third by Morticia Knight
Word and Deed by Rachel Rossano
All Backs Were Turned by Marek Hlasko
Strike (Completion Series) by Roberts, Holly S.
Electric Blue by Nancy Bush