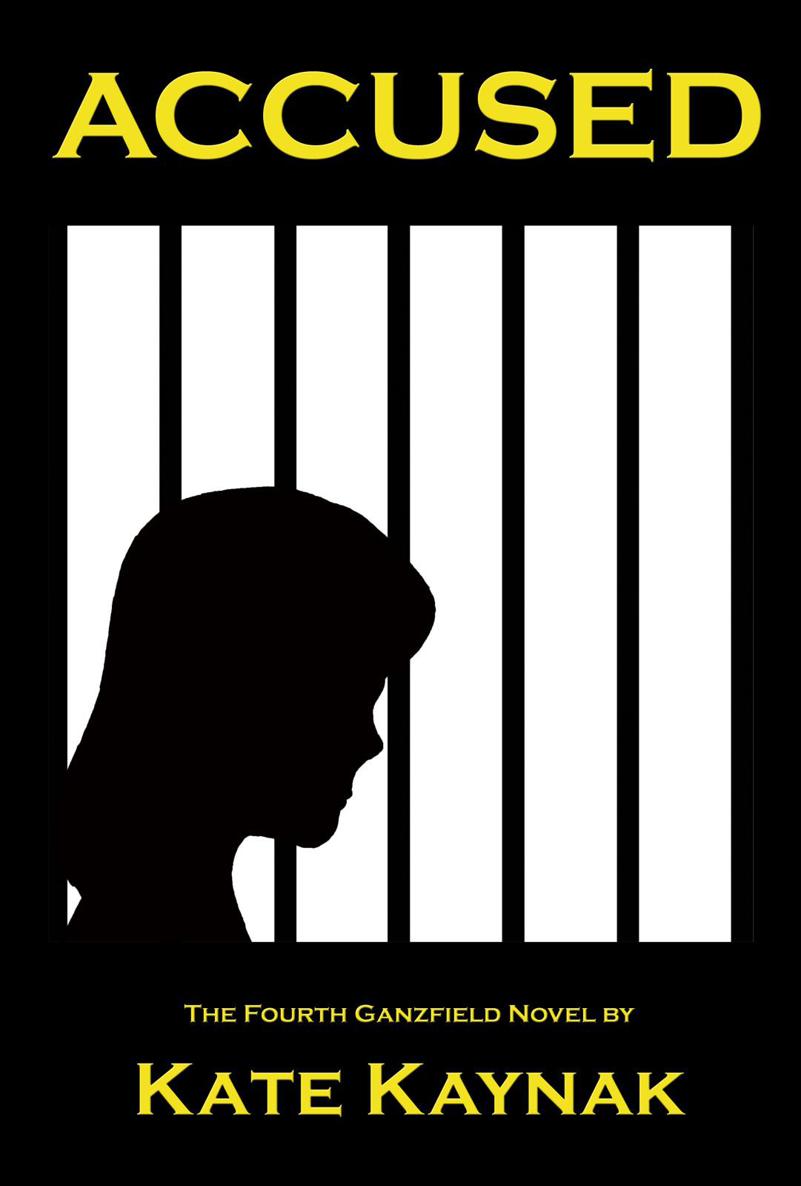 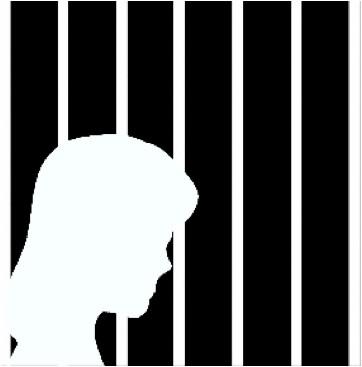 This book is dedicated to everyone who has imagined that the Ganzfield world just might be real. 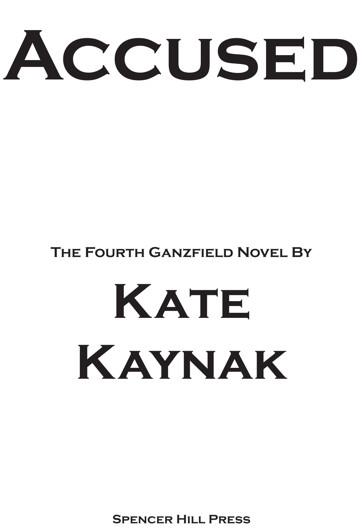 Accused
is the fourth book in the Ganzfield series. When I started, I’d planned a trilogy and I really didn’t know if Maddie would survive the end of
Legacy
. I mean, I wanted her to and all, but I wasn’t completely sure it would work out that way. Now, we have at least six installments planned. So sit back, put up your feet, and get comfy, because we’re all going to be here for a while.

Well, maybe not
all
of us. If you’ve read the first three books, you know there’s no telling when a massacre might occur.

Ganzfield is a secret training facility near North Conway, New Hampshire. It normally houses and trains about eighty teenagers, whose special abilities have been enhanced with a synthetic neurotransmitter called dodecamine (pronounced “dough-DECK-a-mean”). The number of people at Ganzfield has changed over the past year—first when half the people there were killed in an attack by the Sons of Adam, and second when former students and family members came to find refuge from Isaiah. Since he’s no longer a threat, most have returned to their homes and lives.

Williamson’s office and private suite occupy the top floor of the main building, which also holds the dining hall and the library. Across the way, Blake House holds classrooms, girls’ dorm rooms, and the infirmary. Maddie and Trevor live in the old church that sits back in the woods. The sparks sleep in a cluster of fireproof cinderblock cottages down by the lake. Other houses and cabins dot the property, as well.

Minders are telepathic; they hear the thoughts of everyone within range. Some can block other telepaths from reading their minds, and a few can project thoughts and images to others. They’re also immune to the mind control of charm commands. On the downside, they can’t block out incoming thoughts, which means other people’s pain, emotions, and nasty thoughts hit them, too.

Seventeen-year-old Maddie Dunn can do it all…
and
she can overload people’s brains with enough energy to cause pain, injury, or even death. She’s the last lethal telepath left standing, although an earlier mental duel with Isaiah damaged the area of her brain that controls speaking, so she can’t talk aloud anymore.

Thanks to their “special connection,” everything Maddie can do, Trevor can, too, and vice-versa—at least when they have physical contact. The two of them share abilities, take part in each other’s dreams, and “soulmate” as pure energy—so it’s a good thing they totally adore each other.

Dr. Jon Williamson runs the place. He can shield and project thoughts, and he’s pretty good at using his special gifts in the stock market. Maddie’s still learning some of his tricks, but she already has a few million dollars in the bank and was declared an emancipated minor so she could handle the financial paperwork.

Seth Black has the largest range of any minder, but he can’t project thoughts to non-telepaths. Telepaths can, of course, just think things at each other and have silent conversations. However, with Seth’s strong sensitivity, other minders are much too loud up close, which makes Seth keep his distance.

Ann Williamson, Dr. Williamson’s niece, has abilities that are a lot like Maddie’s. They both experience other people’s emotions as colorful auras. Ever since Ann pushed the energy of Isaiah’s overload from Zack’s mind, she occasionally accidentally projects her thoughts to everyone, but most of the time she remembers to shield.

Nina Dunn is Maddie’s mother and her telepathic abilities aren’t as strong as the others’, since she didn’t receive dodecamine while her brain was still developing in adolescence. She needs physical touch to read people’s thoughts, although the other minders are loud enough she hears them without contact.

Trevor Laurence is Ganzfield’s only telekinetic. He controls two mental hands that can extend about fifteen feet from his body and can even pass through solid matter. They change size and shape to do what he needs them to—including stopping bullets. Unfortunately, his ability doesn’t shut down when he sleeps, which makes him a dangerous roommate when his ability acts out his dreams.

Speaking of dangerous roommates, sparks control fire… and accidentally start fires when they’re sleeping or when their emotions get too strong. The two main families—the McFees and the Underwoods—make up about half of the residents of Ganzfield.

Most of Ganzfield’s charms—people who can lace their words with mind-control—died in the massacre. Zack Greyson survived because he wasn’t there. And he isn’t just any old charm—he can shield his thoughts from minders and can also shake off other people’s charm commands. He’s also got something romantic going with Ann Williamson.

Nick Coleman, a charm lawyer in New York City, takes care of financial and legal issues for Williamson and the rest of Ganzfield.

Cecelia Mitchell is a student at the University of New Hampshire. She’s had a frown for Maddie from the start, when Maddie threw off one of her charm commands the first time they met. Despite finding themselves on the same side on more than one occasion, they still can’t stand each other.

Belinda Nash is the charm who used to spy for Ganzfield in Washington, D.C. She’d compel men to call her as a hooker, and then would charm them into thinking she’d done all sorts of nasty stuff with them, while she’d actually used the time to pump them for information. Williamson put her under house arrest in a trailer in the woods when she pushed Maddie too far by putting fake memories into Trevor’s head. Her confinement was really for her own protection, but she turned on Williamson, charmed a bunch of people to gather intel on Ganzfield, and then sold it to Isaiah. When Isaiah came east, she used Grant McFee to circumvent Zack’s charm commands that had been holding her in place. After they escaped, she forced Grant to burn himself alive.

So yeah, she’s not good.

Matilda and Morris Taylor use their healing abilities to instantly mend cuts, burns, broken bones, internal bleeding, and other physical damage by revving up and controlling a person’s natural healing mechanisms. Hannah Washington is their current student, and Heather McFee (the only healer in a family of sparks) studied with them before she went to med school. Healers can also knock people unconscious with a touch, which comes in handy during medical procedures… or when someone gets in their way but they don’t want to kill them.

Rachel Fontaine can normally get visions of people, places or things she knows, no matter where they are in the world. She’s off the meds right now, though; dodecamine’s probably not good for her baby, whose father, Sean McFee, died on a mission a few months ago. Most of the other RVs were killed in the massacre, but a few of the older ones, like Rick Hanson and Rachel’s dad, came back for safety when Isaiah was stalking everyone.

Isaiah, the other telepath who could kill with a thought, had been stalking and killing G-positives. He did it because he’d lost his access to dodecamine and because he viewed all other G-positives as threats. When Williamson cut off everyone outside of Ganzfield, Isaiah came back east to force the Ganzfield people into supplying him with dodecamine. He’d put all the information and videos that Belinda had sent him on a website and then, when his blackmail plan failed, he sent the link in a mass email before he died. Coleman and the remaining charms had been able to handle the recipients in the media and even some in the government, but they’d had no luck tracing the owners of the two classified military accounts who’d downloaded the files.

Trevor leaned one elbow on the check-in counter as he handed the airline employee our passports. His eyes met mine, sharing a secret meaning behind the words. I grinned back, holding my thoughts behind a mental shield. Boston’s Logan Airport was crowded and hundreds of minds stomped across mine. I needed to keep from sharing them with Trevor—who’d pick them up through our special connection—so at least one of us would be able to concentrate.

—so stupid we have to take off our shoes—

—already want to go home. This trip is going to—

—forgets to feed the fish while I’m gone, they’re all gonna die, and the apartment will smell like—

—can’t pack lightly to save her life. What’s in this bag? Rocks? Is she bringing designer rocks to—

—put the carry-on in front of me and wear the backpack, maybe they won’t notice the extra—

In about eight hours, Trevor and I would be in Aruba. The two of us were renting a house for a week—with its own private beach. Giddy amber sparkles passed through me at the thought. This trip took the phrase “dream come true” to a whole new level. And after the past few months, we really needed the down time.

The desk agent handed back our passports, gave us boarding passes, and then directed us to the security line. Trevor took me by the hand and led the way through the crowds—he knew how hard it was for me to focus with this many people’s thoughts pressing down on me. Sometimes being telepathic sucked.

It didn’t help that I was also functionally mute, thanks to that fight with Isaiah last spring. At least I could project my thoughts to others so I could still communicate. We tried to keep all that G-positive mental ability stuff low profile, though, so the whole getting-part-of-my-brain-burned-away thing kinda limited my social life these days.

We’d only been in the security line for a few seconds when I felt the cool touch of mental recognition.
Madeline Elizabeth Dunn.
Goosebumps prickled along my arms—everyone who knew me called me Maddie.

I twisted to look behind me, trying to make the move look casual. At the second flash of recognition, icy yellow tendrils of fear shot through me.

Maddie, what’s wrong?
Trevor wrapped a protective invisible arm around me. I dropped my mental shield, wincing with him as my thoughts suddenly body-slammed his.

Someone’s targeting me. At least two of them.

Trevor’s grip tightened on my hand and his face hardened as he glanced around us. Four more people with my face in their thoughts approached, joining the first two.