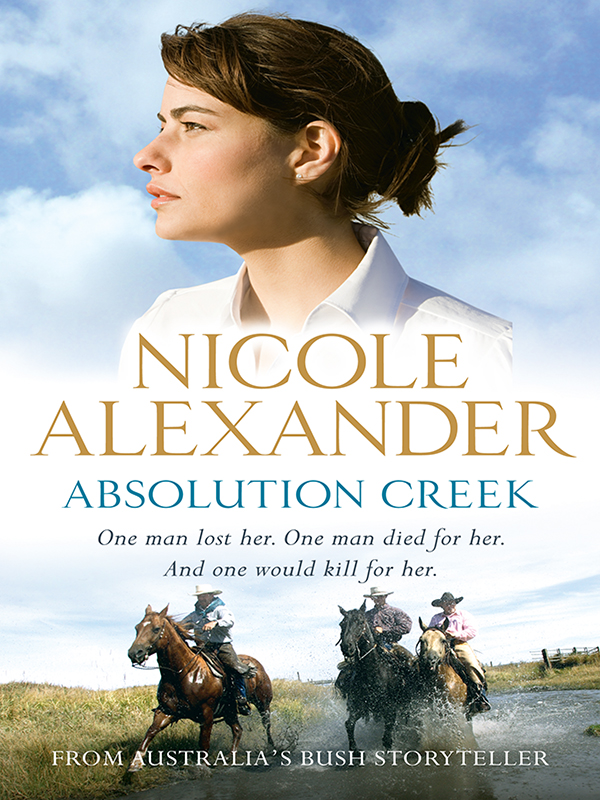 In 1923 nineteen-year-old Jack Manning watches the construction of the mighty Harbour Bridge and dreams of being more than just a grocer’s son. So when he’s offered the chance to manage Absolution Creek, a sheep property 800 miles from Sydney, he seizes the opportunity. But outback life is tough, particularly if you’re young, inexperienced and have only a few textbooks to guide you. Then a thirteen-year-old girl, Squib Hamilton, quite literally washes up on his doorstep – setting in motion a devastating chain of events . . . Forty years later and Cora Hamilton is waging a constant battle to keep Absolution Creek in business. She’s ostracised by the local community and hindered by her inability to move on from the terrible events of her past, which haunt her both physically and emotionally. Only one man knows what really happened in 1923. A dying man who is riding towards Absolution Creek, seeking his own salvation . . .

From the gleaming foreshores of Sydney Harbour to the vast Australian outback, this is a story of betrayal and redemption and of an enduring love that defies even death. 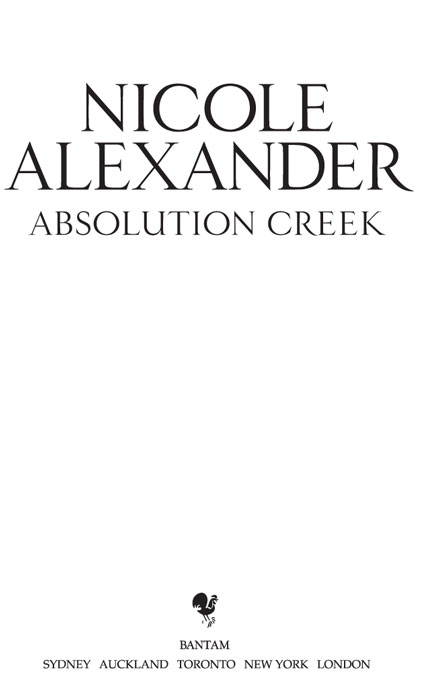 For those who are lost, who would be found.

absolution
n
. 1. the act of absolving; release from consequences, obligations, or penalties

T
he jolt of knuckle on flesh pushed Jack backwards. He felt his lip swelling and in retaliation aimed a punch directly at Mills McCoy’s freckled nose. His next blow winded the Irish hooligan so that he doubled up in pain. Jack wanted to put the boot into the man, however his father had always encouraged him to fight fair, even when his opponent possessed more underhand tactics than the rats running wild in the Rocks.

Mills wiped his bloody nose and spat on the road. ‘You always did have a sneaky jab, Jack,’ he complained, his breathing ragged. ‘Ever since you were ten and I stole that bit of bread from you.’

Jack held out a dinner-plate-sized hand and Mills tossed him the shilling coin. ‘That was eight years ago, Mills, and you’re still picking on youngsters.’ Jack turned to a boy who was standing behind him with a loaf of bread and a string of sausages under his arm, and dropped the coin into the lad’s palm. ‘Next time your ma asks you to fetch the bread, do it right quick.’ The sandy-haired kid nodded his head furiously and ran off.

‘You turned into one of those do-gooders, Jack Manning?’ Mills asked. Having caught his breath he was ready for another round. He lifted his fists; moved his feet from left to right.

Jack rolled his shoulders in anticipation. ‘Don’t you ever get sick of acting the school bully?’

‘Not with you, Jack. You’ve only bested me once.’

‘If you don’t count outing with Mandy Wade. She never did take to you, eh Mills?’

Mills swung a meaty punch, which glanced off Jack’s shoulder. They circled each other slowly.

‘What’re you doing over here, anyway? Are the pickings getting too slight in your neighbourhood?’ Jack nodded towards the expanse of Sydney Harbour and the Rocks area, which straddled the foreshore beyond. They were standing on the corner of Blue and Miller Streets, a layer of cold glazing the terrace houses and shops that stretched down the hill to the water’s edge. Bunting still hung from the fronts of some buildings following the first turning of the sod for the Sydney Harbour Bridge only a few days prior.

Mills threw a punch that would have floored a bullock had Jack not ducked and landed a swift uppercut to Mills’s cheek. The Irishman staggered. He spat another wad of blood onto the footpath. ‘I’ve a mind to finish you, Manning.’

‘What, without your pack to back you up?’ Jack gave Mills a spiky jab to the forearm.

Mills wiggled his nose with obvious pain as a shiny black police wagon crawled the length of the street to park a few hundred yards away. ‘You’re always saved from a sound thrashing, Manning.’ Mills gestured towards the coppers with his thumb and, searching for tobacco, nonchalantly began rolling a smoke.

‘They’ll be parked down there for a while, you know,’ Jack informed him.

‘I’ve got time.’ Mills lit his smoke and nodded at the bunting. ‘This bridge’ll mean the ruination of the Rocks.’

‘You’ve been listening to the scandalmongers. I was in the crowd not two days ago. Saw John Bradfield himself, I did. Hundreds of people, there were. There was a band and we all sang “Advance Australia Fair”.’

‘We don’t mean nothing to them toffs. They need a road to get to this here bridge they’re talking about, and my pa reckons it’ll go straight over the likes of us. They’re talking a new railway line and the resumption of houses.’

Jack knew the talk. They too were near the path of the bridge on the northern side. ‘Nothing’s been decided,’ he answered cautiously, glancing down the street towards the coppers who were now chatting to Father Patrick. He was a crafty one, Mills. ‘Why are you over here?’

‘Thought I’d go aways a bit and find work in one of the northern suburbs. Maybe wood chopping, timber carting, that sort of thing.’ He snorted once, twice; the mucus landed glistening at Jack’s feet. ‘Why wait for the rest of the family to be turned out with this bridge debacle? That’s not for me. Figured I’d try my luck without the rest of them riding my heels.’ Mills rubbed his hands together; cracked his knuckles one by one.

Jack could just imagine Mills doffing his cap, a load of firewood under his arm at the door of some gentlewoman in the leafy northern suburbs. He was a heavyset, ungainly man, with a fighter’s busted nose and a face like a partially stretched concertina. Such looks would hardly endear him to the gentrified. ‘Well, good luck.’ Jack gestured over his shoulder.

The constables were out of the van and stretching their legs. The priest could be heard laughing.

Mills’s eyes clouded. ‘We’ll leave it for another time then, Manning?’

‘Right you are,’ he replied as they parted company. Although not averse to the odd round of fisticuffs, today Jack’s mind remained fixed on a rendezvous of a far more pleasant kind.

Watchers of the Dark by Biggle Jr., Lloyd
Into Focus (Focus Series Book 1) by Alex Bostwick
Love With A Stranger by Taylor, Janelle
A Clockwork Christmas Angel by J. W. Stacks
White Wolf by Susan Edwards
Three to Tango by Emma;Lauren Dane;Megan Hart;Bethany Kane Holly
Ordeal by Linda Lovelace
The Treasure OfThe Sierra Madre by B. Traven
What Mattered Most by Linda Winfree
Wish Upon a Christmas Star by Darlene Gardner