Read A Tiger for Malgudi Online

A Tiger for Malgudi 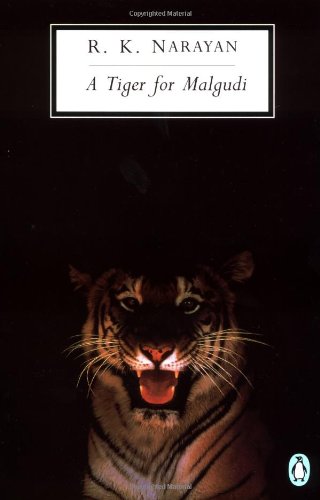 Table of Contents
About the Author
Title Page
Copyright Page
Dedication
[INTRODUCTION]
READ MORE IN PENGUIN
BY THE SAME AUTHOR
BY THE SAME AUTHOR
BY THE SAME AUTHOR
PENGUIN TWENTIETH-CENTURY CLASSICS
A TIGER FOR MALGUDI
R. K. Narayan was born in Madras, South India, in 1906, and educated there and at Maharaja’s College in Mysore. His first novel,
Swami and Friends
(1935), and its successor,
The Bachelor of Arts
(1937), are both set in the enchanting fictional territory of Malgudi. Other ‘Malgudi’novels are
The Dark Room
(1938),
The English Teacher
(1945),
Mr Sampath
(1949),
The Financial Expert
(1952),
Waiting for the Mahatma
(1955),
The Man-Eater of Malgudi
(1961),
The Vendor of Sweets
(1967),
The Painter of Signs
(1977),
A Tiger for Malgudi
(1983) and
Talkative Man
(1986). His novel
The Guide
(1958) won him the National Prize of the Indian Literary Academy, his country’s highest literary honour. As well as five collections of short stories,
A Horse and Two Goats, An Astrologer’s Day, Lawley Road, Malgudi Days
and
Under the Banyan Tree,
he has published two travel books,
My Dateless Diary and The Emerald Route;
four volumes of essays,
Next Saturday, Reluctant
Guru,
A Story-teller’s World and A Writer’s Nightmare;
the retold legends,
Gods, Demons and Others, The Ramayana and The Mahabharata;
a volume or memoirs,
My Days
; and, most recently, a collection of three novellas,
The Grandmother’s Tale.
In 1980 he was awarded the A. C. Benson Medal by the Royal Society of Literature and in 1982 he was made an Honorary Member of the American Academy and Institute of Arts and Letters. Many of his books are published by Penguin.