Read A Tale from the Hills Online

A Tale from the Hills 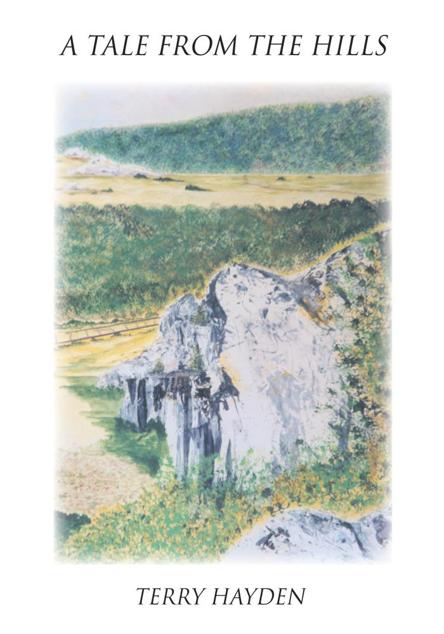 A Tale From The Hills

No part of this publication may be reproduced, stored in a retrieval
system, or transmitted, in any form or by any means, electronic,
mechanical, photocopying, recording, or otherwise, without the written
prior permission of the author.

A tale from the hills / Terry Hayden.

This book was published
on-demand
in cooperation with Trafford Publishing.

In the southwestern part of Virginia, in a region known for its beauty and southern hospitality, lies a scenic byway frequented by tourists and locals alike. The byproduct of a long extinct railroad track that made its way from the town of Abingdon to the edge of North Carolina; few places in the eastern United States can rival its charm and unspoiled natural scenery. On any given day horsemen, bicyclists, and hikers enjoy the fresh air and vistas of the Virginia Creeper Trail. A highway runs parallel to sections of the trail; however, long sections are remote.

During the bygone days of the Virginia Creeper Railroad, life was hard for people who lived in the area. The terrain was beautiful but very rugged. The inhabitants lived and labored under severe conditions. The modern conveniences of electricity and telephone service were not available to the poor but hardworking people. Tiny houses no better than shacks dotted the mountain landscape. Families lived in hollows and ridges along the railroad tracks that were impenetrable except by horseback or on foot. A sense of community or neighborhood spirit did not exist. On rare occasions family members would go into town for supplies because necessities were actually luxuries to the proud mountaineers. They kept to themselves. They were backward and clannish. Superstitions, omens, and unexplained phenomena were often a part of their daily lives. When the rest of the country was suffering under the grip of the Great Depression, inhabitants along the Creeper tracks could not tell the difference.

Illnesses that could easily be cured in more modern times took a heavy toll during that harsh time. The infant mortality rate was high and few people survived to live an old age. Medicines were precious and expensive. Medication and therapy for mental illness was nonexistent. The inflicted family kept its mentally disturbed father, or mother, or child at home. They managed as well as they could, but life was very hard.

The Second World War brought civilization to a random sampling of the mountain population. Men and boys who had never left the shadows of Virginia’s mountains, found themselves in far off lands in Europe and in the Pacific. Survival of the fittest had been their unwritten code before the great war; therefore, most of the men survived, even flourished in the hostile environment of war. When the war ended the vast majority of the men returned to Southwest Virginia.

Some of the men were killed in the field of battle. As an example, two of the men were foraging in a bombed out building and an unexploded shell detonated. The men had been looking for anything of value. They unearthed trinkets in other buildings and sent them home to loved ones. After the explosion the only trinkets sent home were the dog tags that used to hang from their necks. Another soldier went berserk and was killed by his comrades in arms, because they were afraid of him.

When the war erupted in Europe and the Pacific, America was not as prepared as she should have been. In the rush to build a strong military, the rules were relaxed. Testing and evaluating were kept to a minimum much of the time, and as a result, physical and emotional abnormalities that could hinder service were not discovered. The abnormalities were left unchecked until usually it was too late.

William Robert Hill grew up in the mountains of Virginia, slipped through the cracks into military service, survived the war and returned to the United States, via New York City. He met a petite, dark haired waitress from Queens, who reminded him so much of a woman that he used to know and love named Mona, that he stayed in New York. After a two day courtship William Hill and Lola D’Angelo were married in a civil ceremony. William was not a religious man and Lola was much too timid to tell him about her Catholic upbringing. After the wedding ceremony Lola was not allowed to attend church or even speak of anything holy.

William pointed his finger into the air and preached to Lola, “There ain’t no God! You should see the things that I have seen girl. Women, children, old people tortured and mutilated and burned alive in furnaces. Hell, I was there girl. I believe in Hell and I think that I’ve seen the Devil many times, but there ain’t no God. You take care of me and my needs. That’s enough for you.”

In a bizarre sort of way Lola was flattered by his strange words. She would take care of her man and see to his needs. The lovesick girl could think of nothing more important than her man.

Before their first wedding anniversary William was beating her on a regular basis. He had a menial job with the city sanitation department, and she cleaned houses and offices. If she came home even five minutes late from a job, he would beat her. She would run from the subway to make sure that she was home on time. He timed the travel from each of her jobs with his long stride, so she could hardly keep in step with his insane schedule. William accused her of sexual liaisons with her employers, people on the subway, and even the corner grocer. She quickly became terrified of him, but she did nothing to improve her situation.

Even though they lived from paycheck to paycheck, William wanted a child from Lola. She realized that they could not afford a child, and that she could not quit her job to take care of a baby. But she was helpless to intervene. She had no access to birth control, not that she would have used it, and with William it was completely out of the question. He took her everyday, some days two or three times, because he had set his mind to do this thing, to have a child that was his own.

Lola was with child by early Spring. She worked everyday until the day before the baby was due. During the long hot New York Summer she was so miserable that she wanted to die. In late November the baby was born. He was a healthy baby boy that he decided to name William Junior.

The birth of the baby was the beginning of the endfor Lola. The beatings had continued throughout the term of the pregnancy and she feared that her situation would worsen now that she was no longer with child. One afternoon after a humiliating day at work, William flew into a rage. He was angry at his supervisor at work but poor Lola received his wrath. When she walked in the door from the corner store, he struck her in the stomach with such force that she tumbled across a table. She started hemorrhaging internally and he did absolutely nothing to help her. By the time that he finally called an ambulance it was too late. Lola died en route to the hospital. Complications from the recent child birth convinced the emergency room doctor that the hemorrhaging was not that unusual. Her death was ruled complications from recent childbirth.

William Hill murdered his young wife but he blamed his tiny son for her death. His insane logic had convinced him that the little bastard was probably not even his child. If a concerned neighbor had not intervened in the baby’s behalf, the infant mortality statistic for that year would have climbed by a fraction of a percentage point.

William and Lola’s apartment was on the third floor of a rundown tenement in Queens, New York. The rooms were small and the walls were paper thin. Nell Higgins lived in the apartment next to theirs. Nell was painfully aware of the domestic situation in the Hill apartment. She knew that William beat Lola, and she suspected that he would hurt the baby as well.

Nell had lived in the same tiny apartment for many years. Her husband was killed in a traffic accident years earlier and she survived on a widow’s pension. During her tenure in the building many people had come and gone, but Nell became close to Lola. Nell felt powerless to help Lola, and she knew that the worst possible scenario would eventually take place between poor Lola and William. Nell realized early in her relationship with the Hills that William was quite insane. She saw the way that he looked at Lola, the way that he looked at other tenants, especially the men, and the way that he looked at Nell herself. She was terrifiedof him and she had witnessed firsthand the brute intimidation that he forced upon mild mannered Lola.

On the night of Lola’s death William knocked at Nell’s door. When she opened the door William without even asking, practically threw the baby at her.

“Take care of the kid will you? Lola is sick. I’m taking her to the hospital. I’ll get the kid as soon as I can. Milk and diapers are in the apartment. Here’s the key.” he said.

He practically threw the key at her too. It fell to the floor but he did not bother to pick it up.

He closed the door before Nell could say ‘yes’, or ‘no’, or ask any questions about poor Lola.

Nell laid the baby on her bed. She placed pillows around him to make sure that he did not roll off of the bed. He was a newborn baby, but she was not about to take any chances with his safety.

Nell was so concerned with Lola’s health that she sat in the rocker beside of the bed, and she prayed for what seemed like hours. The next morning she awoke early because the baby was crying. It was six a.m., and she was sure that William, Jr. was wet and hungry. Taking the key that he practically threw at her the night before, Nell unlocked William’s door. He was slouching at the table and drinking a beer. His eyes were puffy but he appeared to be furious.

“Oh, I am so sorry.” Nell apologized.

“I don’t know what I am going to do, especially with the kid.” he stated.

After a few moments he added, “I need to contact her family. I don’t even know if they have a telephone. And her funeral, and…. Hell! I don’t know… so much to do.”