Read A Sort of Life Online

A Sort of Life 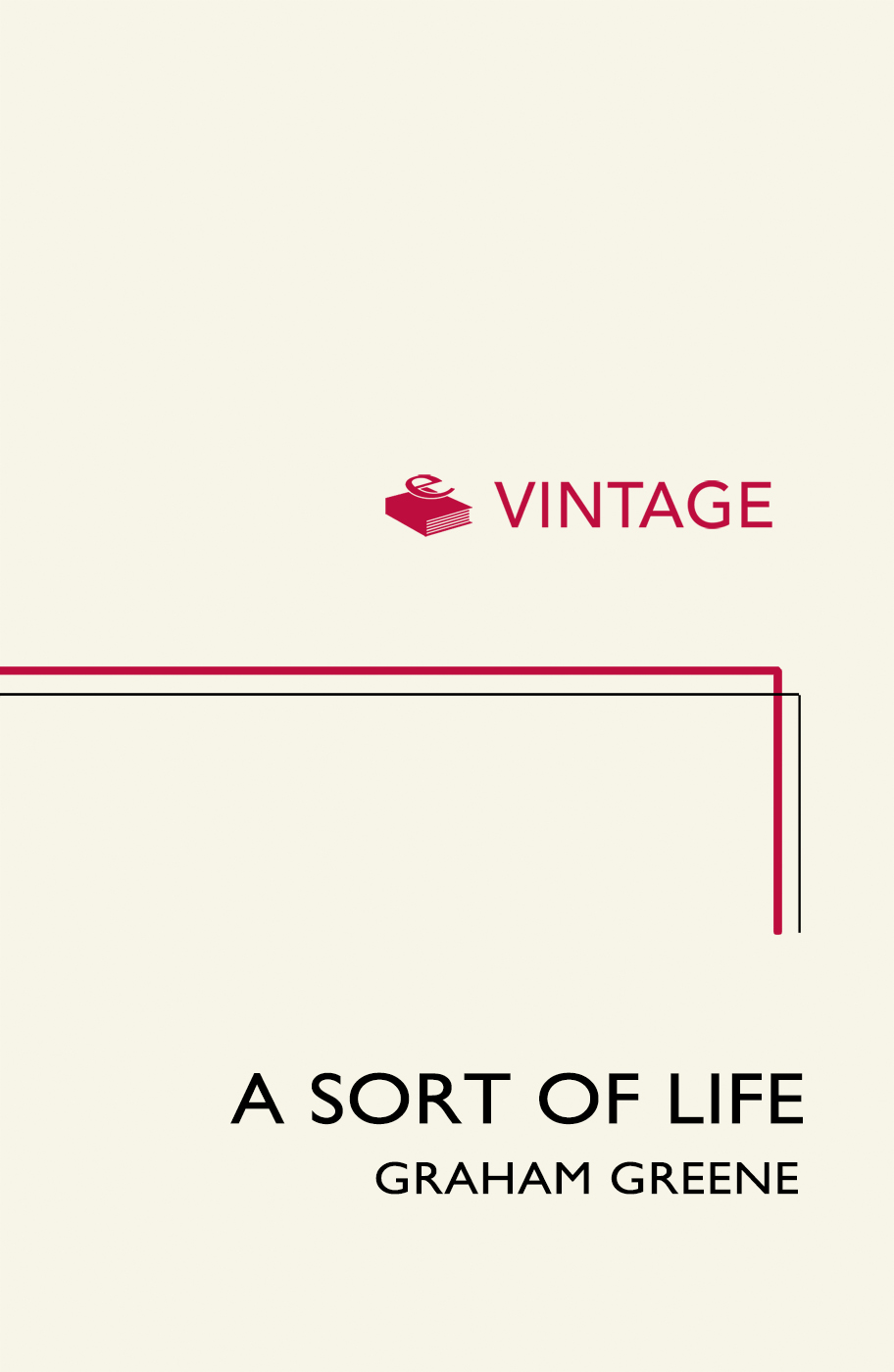 Graham Greene’s ‘long journey through time’ began in 1904, when he was born into a tribe of Greenes based in Berkhamstead at the public school where his father was headmaster. In
A Sort of Life
Greene recalls schooldays and Oxford, adolescent encounters with psychoanalysis and Russian roulette, his marriage and conversion to Catholicism, and how he rashly resigned from
The Times
when his first novel,
The Man Within
was published in 1929.
A Sort of Life
reveals, brilliantly and compellingly, a life lived and an art obsessed by ‘the dangerous edge of things’.

Graham Greene was born in 1904. On coming down from Balliol College, Oxford, he worked for four years as sub-editor on
The Times
. He established his reputation with his fourth novel,
Stamboul Train
. In 1935 he made a journey across Liberia, described in
Journey Without Maps
, and on his return was appointed film critic of the
Spectator
. In 1926 he was received into the Roman Catholic Church and visited Mexico in 1938 to report on the religious persecution there. As a result he wrote
The Lawless Roads
and, later, his famous novel
The Power and the Glory. Brighton Rock
was published in 1938 and in 1940 he became literary editor of the
Spectator
. The next year he undertook work for the Foreign Office and was stationed in Sierra Leone from 1941 to 1943. This later produced the novel,
The Heart of the Matter
, set in West Africa.

As well as his many novels, Graham Greene wrote several collections of short stories, four travel books, six plays, three books of autobiography –
A Sort of Life, Ways of Escape
and
A World of My Own
(published posthumously) – two of biography and four books for children. He also contributed hundreds of essays, and film and book reviews, some of which appear in the collections
Reflections
and
Mornings in the Dark
. Many of his novels and short stories have been filmed and
The Third Man
was written as a film treatment. Graham Greene was a member of the Order of Merit and a Companion of Honour. He died in April 1991.

ALSO BY GRAHAM GREENE
Novels
The Man Within
It’s a Battlefield
A Gun for Sale
The Confidential Agent
The Ministry of Fear
The Third Man
The End of the Affair
The Quiet American
A Burnt-out Case
Dr Fischer of Geneva
or
The Bomb Party
The Tenth Man
Stamboul Train
England Made Me
Brighton Rock
The Power and the Glory
The Heart of the Matter
The Fallen Idol
Loser Takes All
Our Man in Havana
The Comedians
The Human Factor
Monsignor Quixote
The Honorary Consul
The Captain and the Enemy
Short Stories
Collected Stories
The Last Word and Other Stories
May We Borrow Your Husband?
Twenty-One Stories
Travel
Journey Without Maps
The Lawless Roads
In Search of a Character
Getting to Know the General
Essays
Collected Essays
Yours etc
.
Reflections
Mornings in the Dark
Plays
Collected Plays
Autobiography
Ways of Escape
Fragments of an Autobiography
A World of my Own
Biography
Lord Rochester’s Monkey
An Impossible Woman
Children’s Books
The Little Train
The Little Horse-Bus
The Little Steamroller
The Little Fire Engine
GRAHAM GREENE
A Sort of Life

For the survivors,
Raymond Greene, Hugh Greene
and Elisabeth Dennys
Only robbers and gypsies say that one
must never return where one has once been.
–
KIERKEGAARD
Author’s Note

A
N
autobiography is only ‘a sort of life’ – it may contain less errors of fact than a biography, but it is of necessity even more selective: it begins later and it ends prematurely. If one cannot close a book of memories on the deathbed, any conclusion must be arbitrary, and I have preferred to finish this essay with the years of failure which followed the acceptance of my first novel. Failure too is a kind of death: the furniture sold, the drawers emptied, the removal van waiting like a hearse in the lane to take one to a less expensive destination. In another sense too a book like this can only be ‘a sort of life’, for in the course of sixty-six years I have spent almost as much time with imaginary characters as with real men and women. Indeed, though I have been fortunate in the number of my friends, I can remember no anecdotes of the famous or the notorious – the only stories which I faintly remember are the stories I have written.

And the motive for recording these scraps of the past? It is much the same motive that has made me a novelist: a desire to reduce a chaos of experience to some sort of order, and a hungry curiosity. We cannot love others, so the theologians teach, unless in some degree we can love ourselves, and curiosity too begins at home.

There is a fashion today among many of my contemporaries to treat the events of their past with irony. It is a legitimate method of self-defence. ‘Look how absurd I was when I was young’ forestalls cruel criticism, but it falsifies history. We were not Eminent Georgians. Those emotions were real when we felt them. Why should we be more ashamed of them than of the indifference of old age? I have tried, however unsuccessfully, to live again the follies and sentimentalities and exaggerations of the distant time, and to feel them, as I felt them then, without irony.

I
F
I had known it, the whole future must have lain all the time along those Berkhamsted streets. The High Street was wide as many a market square, but its broad dignity was abused after the first great war by the New Cinema under a green Moorish dome, tiny enough but it seemed to us then the height of pretentious luxury and dubious taste. My father, who was by that time headmaster of Berkhamsted School, once allowed his senior boys to go there for a special performance of the first
Tarzan
movie, under the false impression that it was an educational film of anthropological interest, and ever after he regarded the cinema with a sense of disillusion and suspicion. The High Street contained at ‘our end’ a half-timbered Tudor photographer’s shop (from the windows the faces of the locals looked out in wedding groups, bouqueted and bemused like prize oxen) and the great flinty Norman church where the helmet of some old Duke of Cornwall hung unremarked on a pillar like a bowler hat in a hall. Below lay the Grand Junction canal with slow-moving painted barges and remote gypsy children, the watercress beds, the hillocks of the old castle surrounded by a dry moat full of cow-parsley (it had been built, so they said, by Chaucer, and in the reign of King Henry III it was besieged successfully by the French). The faint agreeable smell of coal dust blew up from the railway, and everywhere were those curious individual Berkhamsted faces which I feel I could recognize now anywhere in the world: pointed faces like the knaves on playing cards, with a slyness about the eyes, an unsuccessful cunning.

And then there remains to be set reluctantly on my personal map the School – part rosy Tudor, part hideous modern brick the colour of dolls’-house plaster hams – where the misery of life started, and the burial ground, long disused, which lay opposite our windows, separated from our flower-beds by an invisible line, so that every year the gardener would turn up a few scraps of
human bone in remaking the herbaceous border. Further off to the north, on the green spaces of a map empty as Africa, lay the wastes of gorse and bracken of the great Common which extended to Ashridge Park, and to the south the small Brickhill Common and the park of Ashlyns, where I once saw a Jack in the Green covered with spring leaves, dancing cumbrously among his attendants like the devils I met later in Liberia.

Everything one was to become must have been there, for better or worse. One’s future might have been prophesied from the shape of the houses as from the lines of the hand; one’s evasions and deceits took their form from those other sly faces and from the hiding places in the garden, on the Common, in the hedgerows. Here in Berkhamsted was the first mould of which the shape was to be endlessly reproduced. For twenty years it was to be almost the only scene of happiness, misery, first love, the attempt to write, and I feel it would be strange if, through the workings of coincidence, through the unconscious sources of action, through folly or wisdom, I were not brought back to die there in the place where everything was born.

At the far end of the long High Street was the village of Northchurch and an old inn, the Crooked Billet. The name, perhaps because of some event which had happened there and had left an ambiguous impression in my mind from veiled adult conversation, always had for me a sinister ring (in the inn I was sure travellers had been done to death), and this gave the whole Northchurch village an atmosphere of standing outside the pale: a region of danger where nightmare might easily become reality. We were never taken there for walks, though this could well have had a natural explanation, for why should any nurse endure the two-mile trudge along the High Street, past the town hall, past the new King’s Road, up and down which the commuters streamed twice a day to the station with their little attaché cases, past Mrs Figg’s toy-shop where the children would certainly want to linger, past the sinister stained-glass windows of the dentist, along the market gardens, with everywhere that odd gritty smell blowing up from the coal yards and the coal barges?

There was another walk too which we never took when we were in charge of our old crotchety nurse or the nursemaid, and
that was the walk along the towing path by the canal. If a sinister atmosphere lay in my mind around the Crooked Billet, a sense of immediate danger was conveyed by the canal – the menace of insulting words from strange brutal canal workers with blackened faces like miners, with their gypsy wives and ragged children, at the sight of middle-class children carefully dressed and shepherded, and the danger too, as I believed, of death from drowning.
The Berkhamsted Gazette and Hemel Hempstead Observer
periodically printed the reports of inquests on those found drowned in the canal; the casualties among the barge children were reputed to be high, and the story that anyone who fell into a lock was beyond rescue was not contradicted in our imaginations by the lifebelt which hung on the wall of each lock-house. I cannot to this day peer down into a lock, down the sheer wet walls, without a sense of trepidation, and many of my early dreams were of death by drowning, of being drawn magnetically towards the water’s edge. (So strong did these dreams become in my adolescent years that they affected my waking life, and the margin of a pond or a river would attract my feet, just as a fast car can hypnotize a pedestrian on an otherwise empty road.)

The Alpha's Foe (A Paranormal Shifter Romance) (Billionaire Alpha) by Rossi, Trina
The Tycoon's Revenge (Baby for the Billionaire - Book One) by Anne, Melody
Captured Love by Jane Lark
Touch and Go by Parkinson, C. Northcote
B004QGYWDA EBOK by Llosa, Mario Vargas
Saved by the Bride by Lowe, Fiona
Recovery and the Return of Ethan Hart by Stephen Benatar
Lemon Sherbet and Dolly Blue by Knight, Lynn
The Dinosaur Feather by S. J. Gazan
Lord Scandal by Kalen Hughes